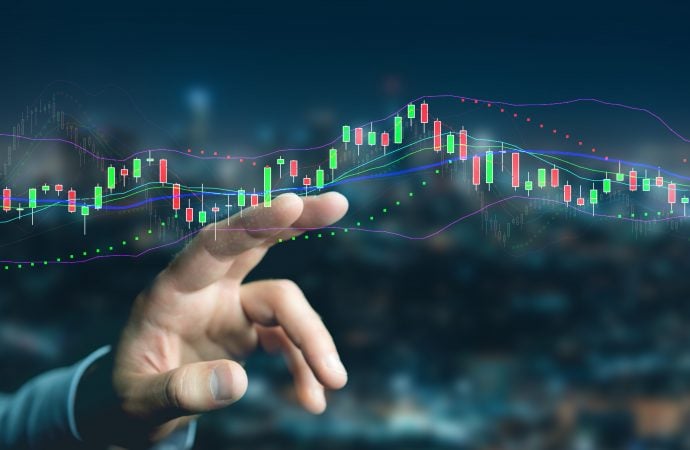 Trading in September is down more than 2.3 percent.

Wednesday watched the euro register a fourth successive daily loss against the dollar, extending space under channel support from 1.1695. The pair is tipped for more underperformance as support is not expected to surface until reaching 1.1553, with a break uncovering clear demand at 1.1369/1.1450.

With respect to the RSI oscillator, the line pushed through the lower limit of a (near) two-month descending channel formation, poised to perhaps greet oversold territory.

After retesting 1.17, sellers arrived at demand from 1.1640/1.1657, an area drawn from July. Although the RSI exhibits bullish divergence, the aforesaid demand is likely to offer little in terms of upside movement, owing to where we trade on the bigger picture. The 1.16 level is next in line should we probe lower, reinforced by a nearby support at 1.1589.

Although H1 is testing demand at 1.1640/1.1657, the monthly, daily and H4 timeframes indicate any upside could be short-lived. A retest at 1.17, therefore, would likely interest sellers, as may a break of the H1 demand.

AUD/USD pushed through a fourth successive daily loss on Wednesday, prizing action beyond demand at 0.7131/0.7192 (a drop-base-rally area) to test support at 0.7067.

The trend, according to the daily timeframe, has emphasised a positive tone since bottoming in late March. Traders may also recognise the RSI trades south of 53.00, a clear S/R level since October 2019, and is on track to test oversold space.

0.7178 resistance capped upside in the early hours of Wednesday, followed by a sharp slump through 0.7150 support.

After dethroning 0.71, the pair landed at support from 0.7070. Technical pattern traders may also wish to acknowledge we have a falling wedge configuration taking form, drawn from 0.7229/0.7154.

With reference to the RSI, we are trekking within oversold territory right now.

Daily support recently making a show at 0.7067, along with H1 action also receiving support at 0.7070, could invite a recovery today. Should H1 breakout of the current falling wedge (a reversal signal) and take on 0.71, intraday follow-through buying to supply at 0.7148/0.7135 would not be a surprise.

Failure to rally from current price, nonetheless, H4 demand at 0.7014/0.7035 is likely to make an entrance, a zone that aligns with the upper border of monthly demand at 0.7029. 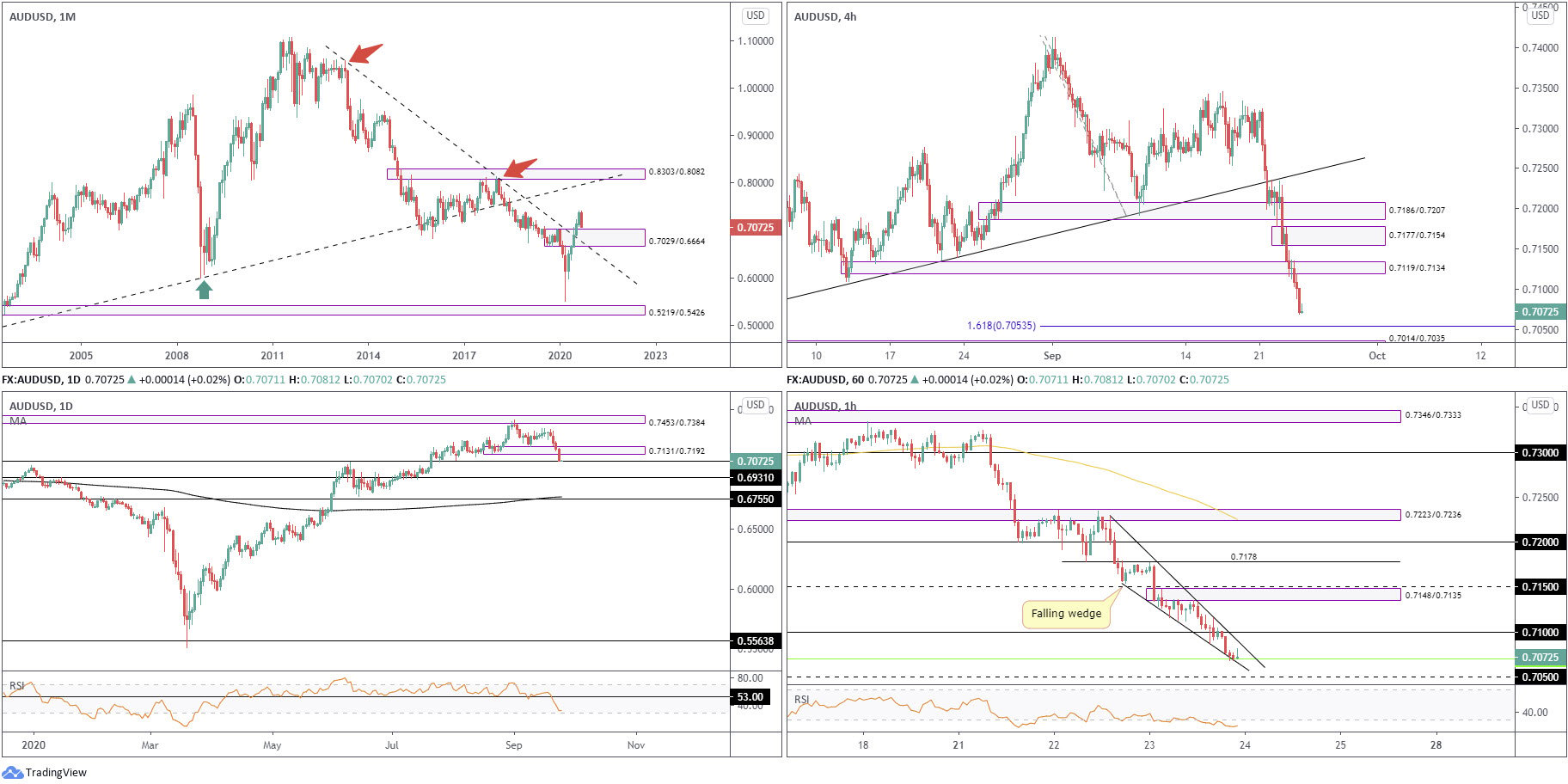 Since kicking off 2017, USD/JPY has been carving out a descending triangle pattern between 118.66/104.62. As you can see, price is currently testing the lower boundary of the aforesaid pattern.

Extending recovery gains off monthly support at 104.62 (the lower boundary of the monthly descending triangle) shows price now embarking on the possibility of further upside beyond supply at 105.10/105.29.

The RSI recently bottomed ahead of oversold levels and is now on track to test 50.00.

105.23/105.14 supply entered play in early trading Wednesday, squeezing out mild downside, enough to pull off a 105 retest heading into London. US traders entered a bullish phase and toppled the noted supply to test peaks just ahead of 105.50 resistance (sheltered closely by a supply at 105.55/105.69 [prior demand]).

The RSI indicator, in response to recent buying, has been fading overbought levels.

While the H4 supply at 105.54/105.40 intersects with trendline resistance, downside pressure from this region is unlikely to be anything to write home about. This is largely due to daily price recently upsetting supply at 105.10/105.29 from monthly support at 104.62 (lower base of the monthly descending triangle).

Violating the aforesaid demand potentially charts things back to another demand placed at 1.2192/1.2361.

The RSI indicator is currently drawing up a bottoming phase ahead of oversold levels.

The reaction out of the aforesaid demand had price approach peaks at 1.2777, though price wrapped up the session back under 1.2742.

Despite a number of downside attempts, buyers defended the 1.27 level Wednesday and tested 1.2750 resistance along with nearby trendline resistance (1.2966), which, as you can see, held ground.

Recognising monthly price showing some room to push lower until testing trendline support (around 1.26ish), and daily price struggling to print anything of meaning out of demand at 1.2645/1.2773 echoes a bearish vibe. In conjunction with the higher timeframes, the failure to overthrow H4 resistance at 1.2742 and H1 reacting from trendline resistance could see intraday flow probe beyond 1.27 today, with H1 support at 1.2649 targeted, followed by the 1.26 level. 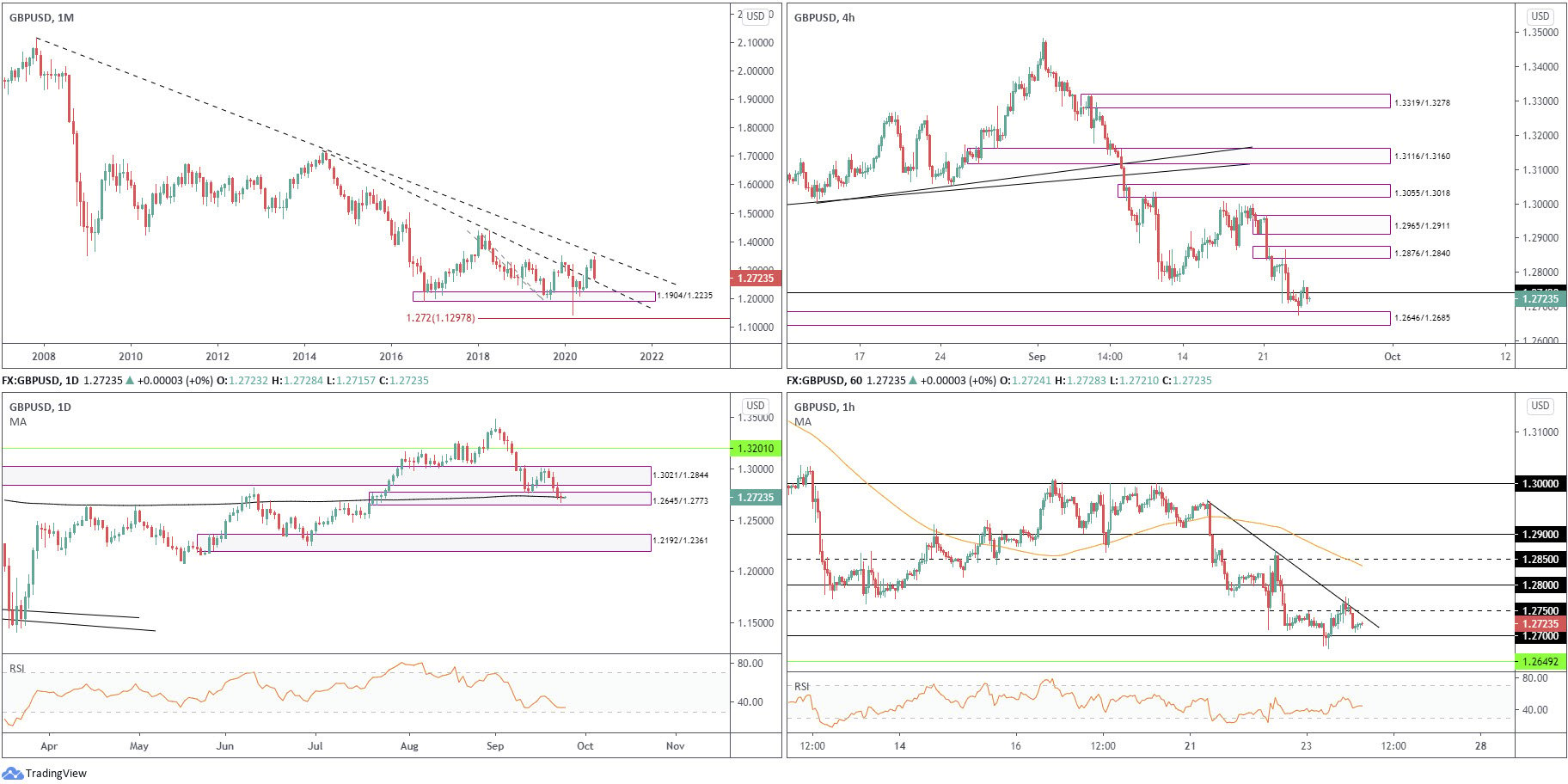