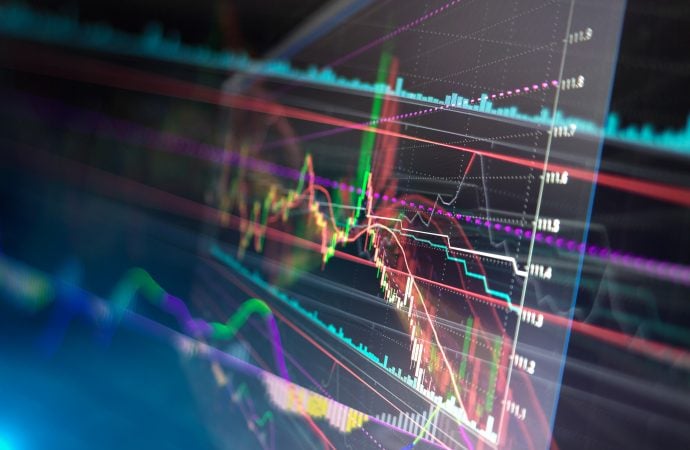 Supply at 1.2012/1.1937 remains a key zone to be mindful of on the daily chart, active since May 2018. Another interesting feature is an early falling wedge pattern between 1.2011 and 1.1612. Yet, do be aware some may interpret this arrangement as a descending triangle pattern.

RSI fans will also note the value recently rotated higher above 50.00, though remains rooted within the upper region of an ascending channel.

Efforts to join hands with supply at 1.1928/1.1902 (prior demand) have so far failed – price carved out two closely linked tops around 1.1892 Tuesday/Wednesday. It should be noted the aforesaid supply is sited underneath daily supply parked at 1.2012/1.1937, currently encasing the upper line of the daily falling wedge pattern.

Demand at 1.1849/1.1857 made an entrance early in the session Wednesday, securing a reasonably healthy bid to highs at 1.1891. Heading into the close, however, price is seen toying with opening levels around demand, alongside trendline support (1.1745) and the 100-period simple moving average.

Although demand recently re-entered play, traders may also want to note the RSI indicator dipped beneath its 50.00 level.

A break of the aforesaid H1 trendline support, nonetheless, indicates an intraday bearish scene could be in store, with 1.18 in the frame as possible support. 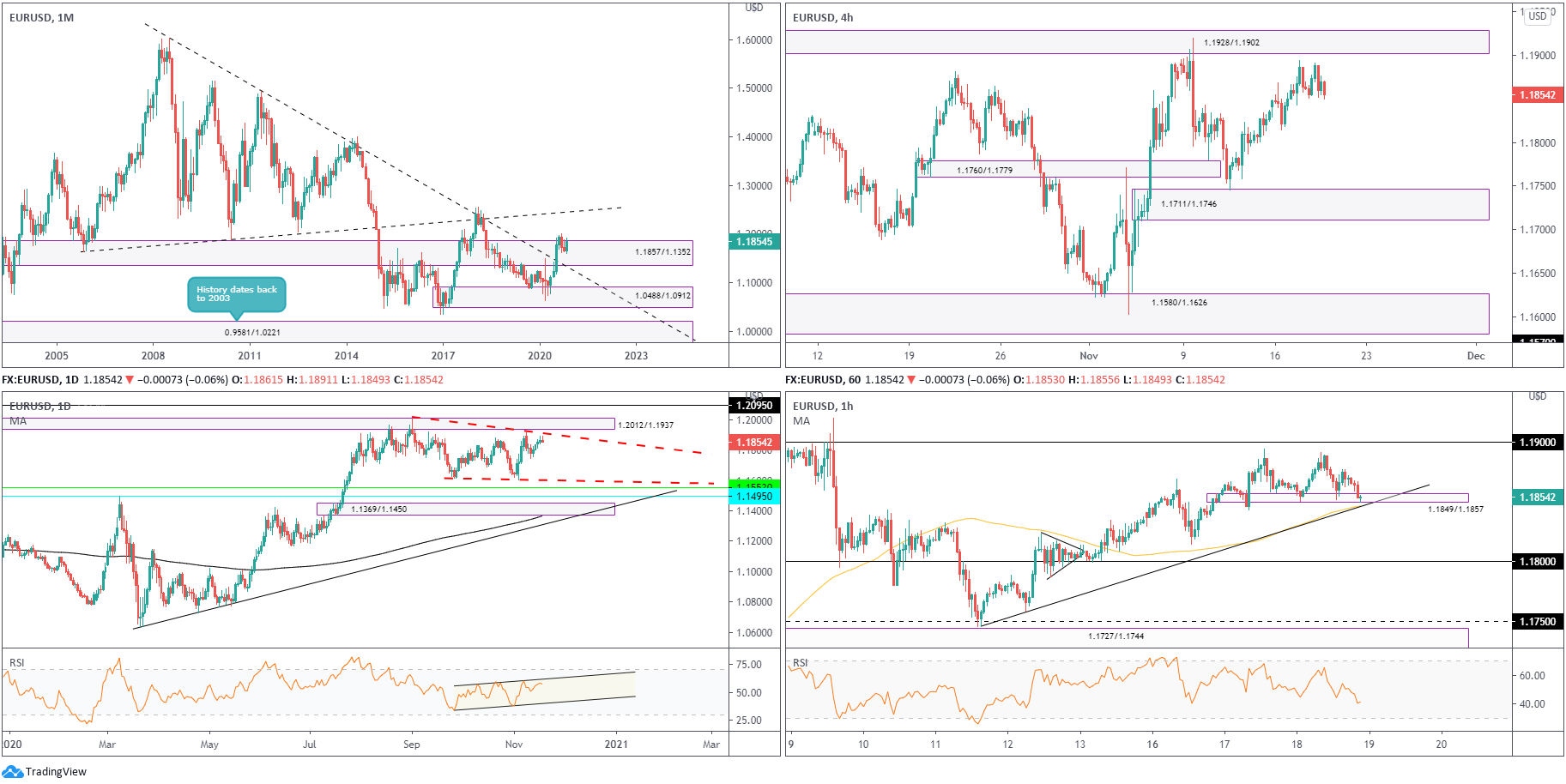 The months of September and October, as you can see, developed a mild correction and addressed the upper border of demand at 0.7029/0.6664 (prior supply). Buyers have so far responded well from the demand (up by 4 percent in November), free to explore as far north as 0.8303/0.8082 in the coming months, a supply zone aligning closely with trendline resistance (prior support – 0.4776).

The RSI indicator continues to languish beneath overbought space, following the removal of 52.00 resistance at the beginning of November.

Familiar resistance at 0.7340 (a horizontal level that’s held buyers back since the beginning of September) is seen to the upside.

Failure to hold gains throws light on channel support (prior resistance – 0.7340) and support charged at 0.7210.

The response from the 100-period simple moving average and demand at 0.7262/0.7273 directed buyers above 0.73 heading into the European session Wednesday and shined light on resistance at 0.7340 and 0.7350 resistance. You will also note the round number served as support going into US trading and is, as we enter Thursday’s session, hovering just ahead of the round number.

November, as you can see, is seen working through the lower edge of the aforesaid pattern, down by 0.9 percent.

Leaving behind supply from 106.33/105.78 and trendline resistance (111.68), as well as RSI resistance at 57.00, sellers have since made a strong show in the shape of five successive daily bear candles.

It should also be noted the RSI oscillator recently paid a visit to oversold space and is on track to challenge the underside of 50.00. 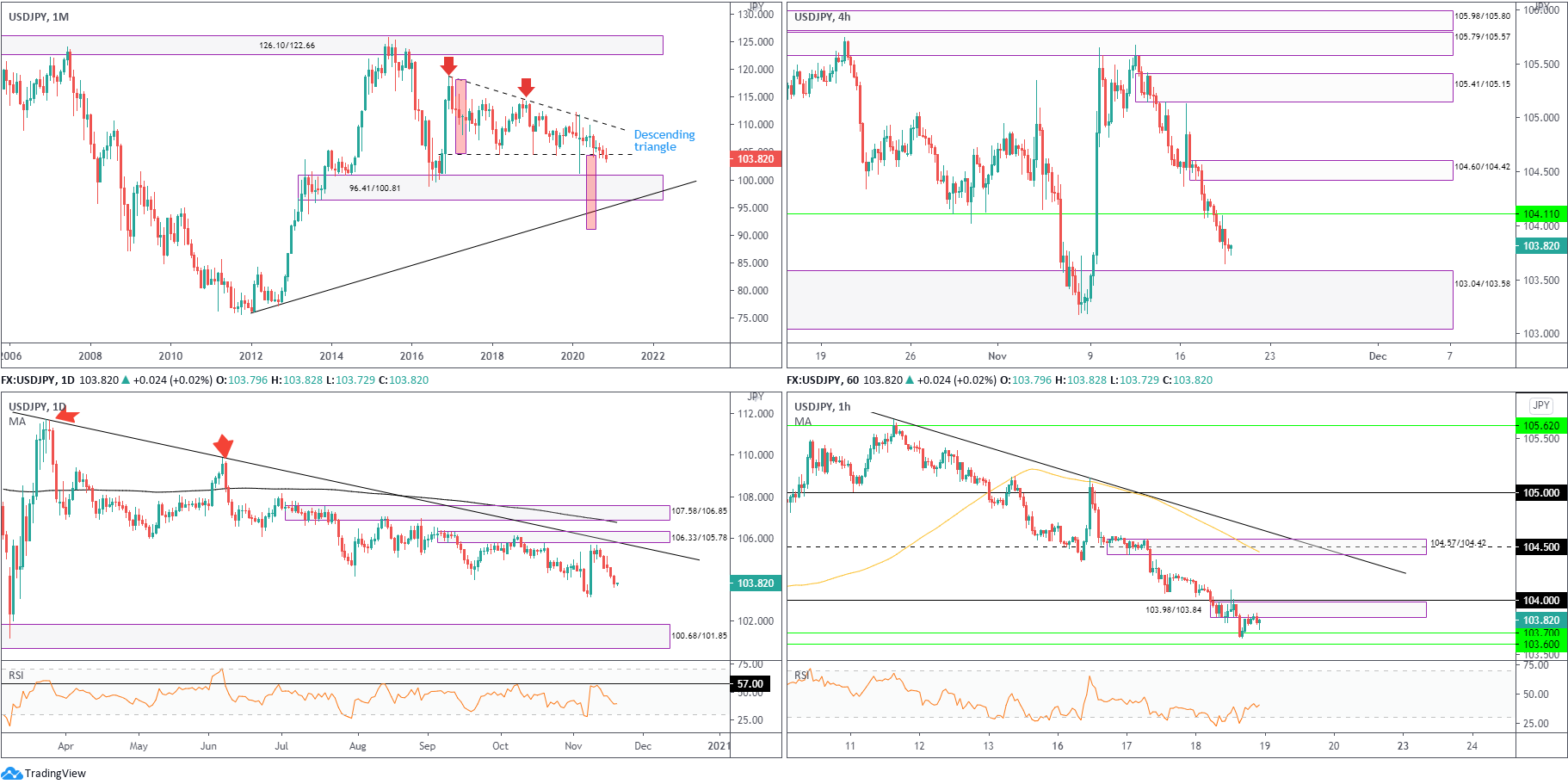 Since crossing paths with demand at 1.2645/1.2773 and 200-day simple moving average in late September, GBP/USD has displayed a gradual interest to the upside. Further buying targets the 1.3483 September high.

Clearing the above said supply today could have supply at 1.3402/1.3368 move into position.

As you can see, price action remains compressing within two converging trendlines, forming a rising wedge pattern from 1.3109/1.3242 (blue).

Short term, GBP/USD sellers may govern direction and take out H1 rising wedge support, fuelled by H4 sellers out of supply from 1.3320/1.3281. Sellers are likely to remain cautious, however, owing to the space seen for higher timeframes to advance.