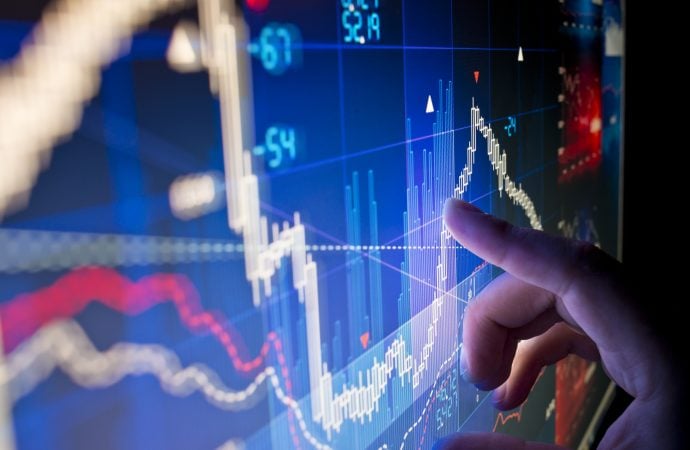 Supply at 1.2012/1.1937 remains a key zone to be mindful of on the daily chart, active since May 2018. Another interesting feature to be aware of is an early falling wedge pattern between 1.2011 and 1.1612. Yet, do be aware some could interpret this arrangement as a descending triangle pattern.

RSI fans will also note the value recently rotated higher above 50.00, though remains rooted within the upper region of an ascending channel.

Daily price is in the process of chalking up what appears to be a rather large falling wedge pattern, on a timeframe that’s mostly trended higher since early 2020. With scope to nudge higher until reaching the upper limit of the aforesaid pattern, and H4 showing room to attack supply from 1.1928/1.1902, H1 buyers off demand at 1.1849/1.1857 may take aim at 1.19 in early trading today.

The months of September and October, as you can see, developed a mild correction and addressed the upper border of demand at 0.7029/0.6664 (prior supply). Buyers have so far responded well from the demand (up by 4 percent in November), free to explore as far north as 0.8303/0.8082 in the coming months, a supply zone aligning closely with trendline resistance (prior support – 0.4776).

The RSI indicator continues to languish under overbought space, following the removal of 52.00 resistance at the beginning of November.

Tuesday had price action cross paths with familiar resistance at 0.7340 (a horizontal level that’s held buyers back since the beginning of September), with the pair subsequently retreating and testing demand from 0.7281/0.7297. This was an area formed following a push out of a descending channel (0.7340/0.7252).

Buyers standing firm today, with enough force to break 0.7340, could possibly uncover another film of resistance at 0.7383.

Following the retest of H4 resistance at 0.7340 on Tuesday, not only did the RSI oscillator test trendline support, buyers and sellers also squared off around the 0.73 level, albeit visiting lows at 0.7289. While this was likely sufficient to trip some protective stop loss orders and also fill a portion of breakout sellers’ orders sub 0.73, buyers appear to have accepted 0.73 as support. 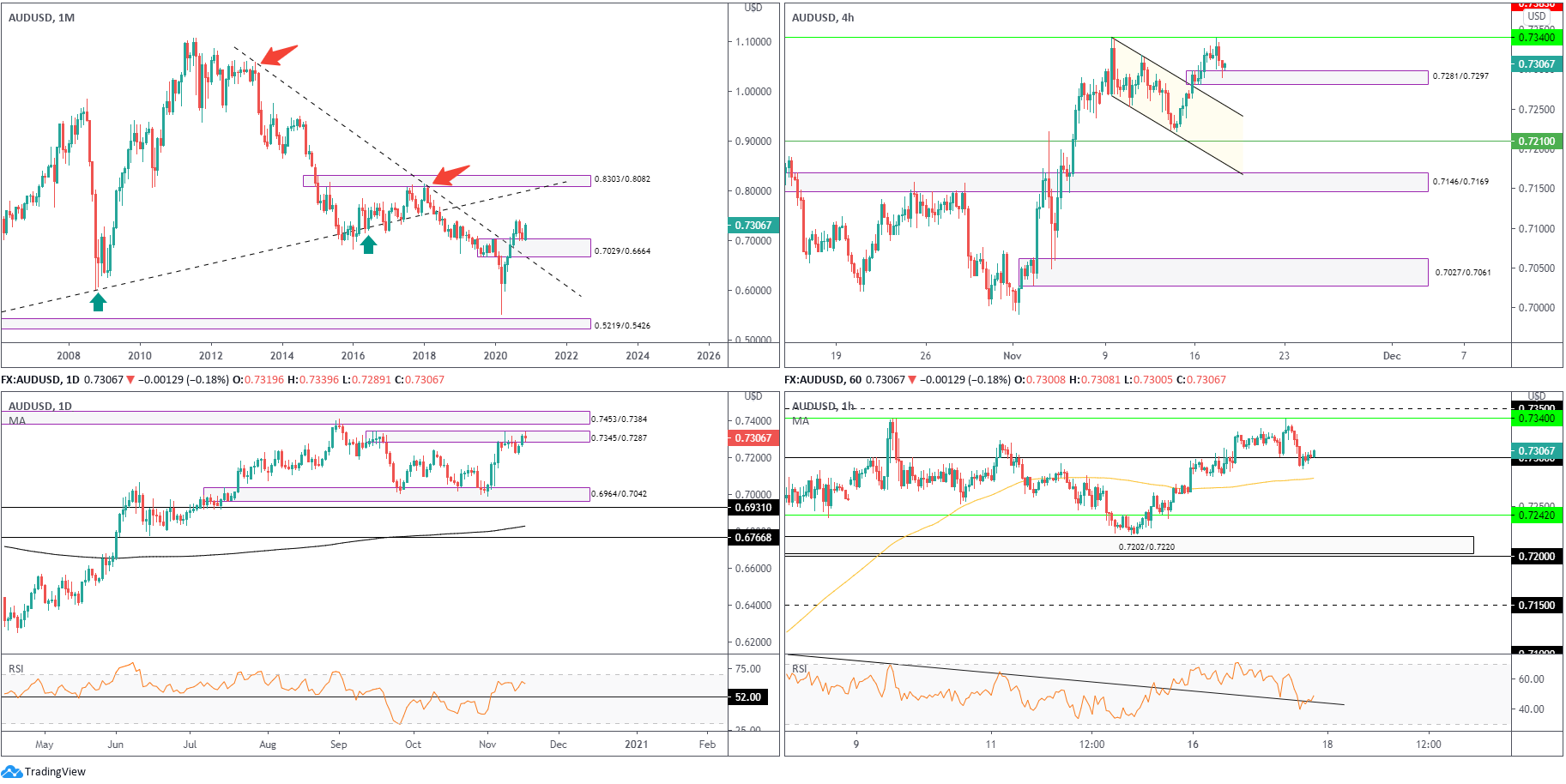 November, as you can see, is seen working through the lower edge of the aforesaid pattern, down by 0.4 percent.

Following the near-test of supply at 105.41/105.15 on Monday, support at 104.11 made an entrance Tuesday. Buyers, as you can see, have shown interest, though not much to write home about at the moment.

It should also be noted the RSI oscillator paid a visit to oversold space.

With higher timeframe sellers in control, intraday buyers may struggle off the 104 region. With that being said, a H1 close below 104 today could deliver a bearish scene, with H1 support at 103.70, followed by the upper line of H4 demand at 103.58, targeted. 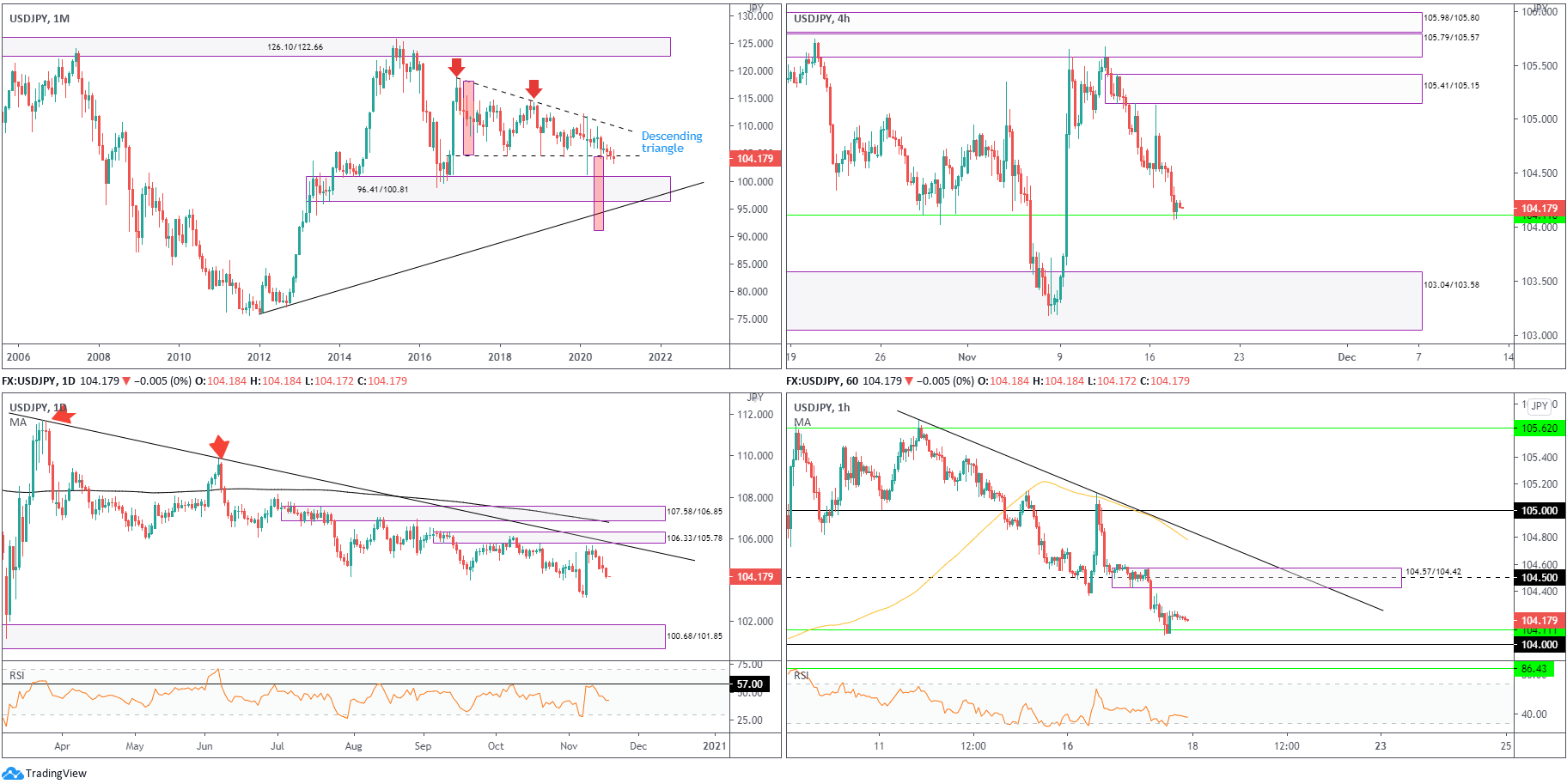 Leaving trendline resistance (2.1161) unopposed, the month of September fell 3.4 percent by way of a bearish outside reversal candle and snapped a three-month winning streak. This, despite November trading higher by 2.4 percent, advertises a possible dip to retest trendline support (prior resistance – 1.7191).

The deep fakeout above resistance at 1.3201 last week, with enough force to cripple most buy-stops, indicates buyers could be looking to step higher and target the 1.3483 September high.

The RSI oscillator, thanks to the GBP/USD forming a third successive daily gain yesterday, is also on track to test overbought levels.

Another interesting aspect of the H1 chart is the possibility of a rising wedge pattern forming from 1.3109/1.3242 (blue).

In similar fashion to Tuesday’s outlook, traders are likely watching for dip-buying scenarios to form, given lacklustre selling around daily resistance at 1.3201, together with room to run higher on the monthly timeframe.