How Do Elections Affect the Stock Market? 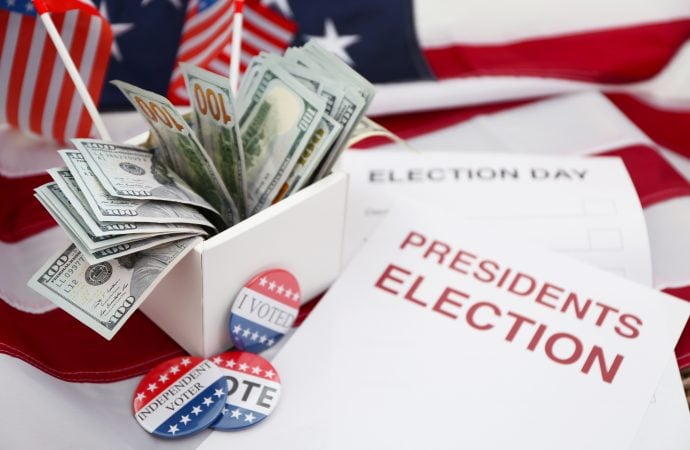 Every four years in the United States, the election for a new president takes place on the first Tuesday after the first Monday in November. This time around it falls on November 3.

Compound the political event of the year with the COVID-19 pandemic (coronavirus), which impacted (and continues to impact) many economies globally, increased volatility in the financial markets, in particular the stock market, is anticipated in the weeks leading up to elections.

The BBC’s polling data[2] also reveals Joe Biden is ahead by seven points in national polls. The BBC noted that Biden has been ahead of Donald Trump in most national polls since the start of the year. He has hovered around 50% in recent months and has had a 10-point lead on occasions.

The main takeaway for many analysts, however, is if national polls are close, say within five to seven points, anything can happen.

it’s crucial to understand that no analyst has been able to consistently forecast the effect elections have on the stock market. Analysts churn out the same hyperbole every presidential election year. The majority of experts claimed stocks would plummet if Donald Trump was elected over Clinton in 2016 – the opposite occurred. Some analysts even went as far to say a Trump victory would be ‘America’s Brexit’.

Reviewing the stock market performance in the months leading up to, during, and following presidential elections provides a helpful guide as to what we can potentially expect.

Past performance shows the volatility in the stock market is elevated in the months leading up to an election as markets loathe ambiguity.

While past results cannot guarantee future results, historical stock market returns to print an encouraging picture. According to the 2019 Dimensional Funds report[3], history shows the market has been positive overall in 19 of the last 23 election years from 1928–2016, displaying negative returns only four times.

Figure A shows the of the S&P 500 over the last 81 years, based on which party was in the presidency. 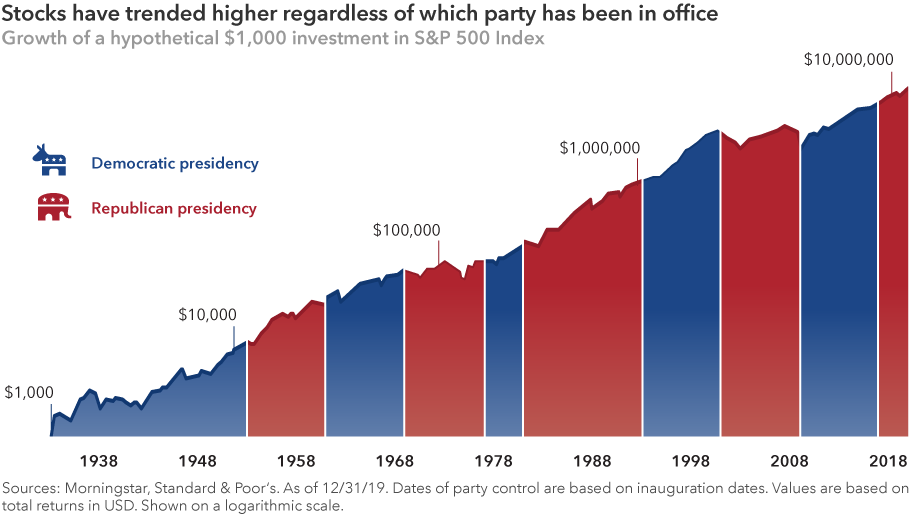 Can the Stock Market Predict Elections?

‘The stock market’s performance won’t definitively determine who wins the White House, especially in a year as unpredictable as 2020. History, however, shows the incumbent president has a clear advantage when the market rallies in the months preceding Election Day’.

Vigna also points out that since 1925, incumbent presidents have won nearly 90% of elections when the S&P 500 is positive in the previous three months, according to brokerage firm BTIG.

‘A chart of the S&P 500’s performance in the three-month period ahead of Election Day has proven accurate over the past four decades’. Detrick adds ‘that a positive return over that three-month period may signal an increased likelihood that the incumbent party may win, while stock market losses during the same period have tended to predict an opposition party win’.

It is important to point out Detrick acknowledges the market isn’t the economy and recognises the impact COVID-19 has had on the economy.

Major US equity benchmarks, as shown in figure B, staged an impressive recovery following steep market declines witnessed in March as COVID-19 fears gripped the country.

Both the Nasdaq (orange) and S&P 500 (blue) have since clocked fresh all-time peaks, with the Dow Jones Industrial average (green) also seen closing in on all-time pinnacles.

Technically, according to the S&P 500 (figure C), we’re holding support at 3338.56, following a near 8 percent dip from all-time peaks at 3588.11. Also significant, though, is the recent trendline support breaks, with the smaller of the two now serving as resistance.

Disclaimer: The information contained in this material is intended for general advice only. It does not take into account your investment objectives, financial situation, or particular needs. FP Markets has made every effort to ensure the accuracy of the information as at the date of publication. FP Markets does not give any warranty or representation as to the material. Examples included in this material are for illustrative purposes only. To the extent permitted by law, FP Markets and its employees shall not be liable for any loss or damage arising in any way (including by way of negligence) from or in connection with any information provided in or omitted from this material. Features of the FP Markets products including applicable fees and charges are outlined in the Product Disclosure Statements available from FP Markets website, www.fpmarkets.com, and should be considered before deciding to deal with those products. Derivatives can be risky; losses can exceed your initial payment. FP Markets recommends that you seek independent advice. First Prudential Markets Pty Ltd trading as FP Markets ABN 16 112 600 281, Australian Financial Services License Number 286354.