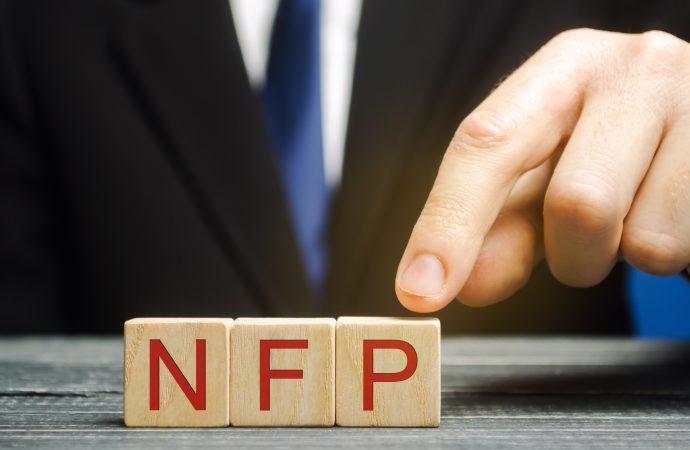 Two comprehensive surveys are used to provide economists and investors a snapshot of the employment situation in the United States each month, through the Household Survey and Establishment Survey—often referred to as the Payroll Survey. Both surveys provide a complete picture of the Labour market.

Due to its timeliness, accuracy, and importance within the broader economy, the employment situation report is a closely monitored indicator.

In most cases, the non-farm payrolls report (taken from the establishment survey) attracts the majority of attention, often vibrating through financial markets. A favourable number (generally considered USD positive) reveals additional jobs were added to the economy, while a negative value (often viewed as USD negative), displayed as -100k or -90k, for example, means jobs were lost in non-farm business.

April’s non-farm payroll’s release was a huge disappointment. Payrolls increased by a less-than-impressive 266,000, following March’s downwardly revised 770,000 reading. With this, May’s figure will be widely watched. Note the three-month rolling average stands at 524,000, and the six-month rolling average falls in around 294,000.

According to the BLS[1], employment in leisure and hospitality increased more than 330,000 as a result of re-opening programmes across many parts of the country.

April’s figure weighed on the US dollar—as measured by the US dollar index (ticker: DXY)—though only a mild reaction was observed in US equities, through the S&P 500. This was largely due to the expectation the United States Federal Reserve is likely to maintain near-zero interest rates.

The general consensus for May’s US non-farm payrolls is an increase in the range of 650,000. 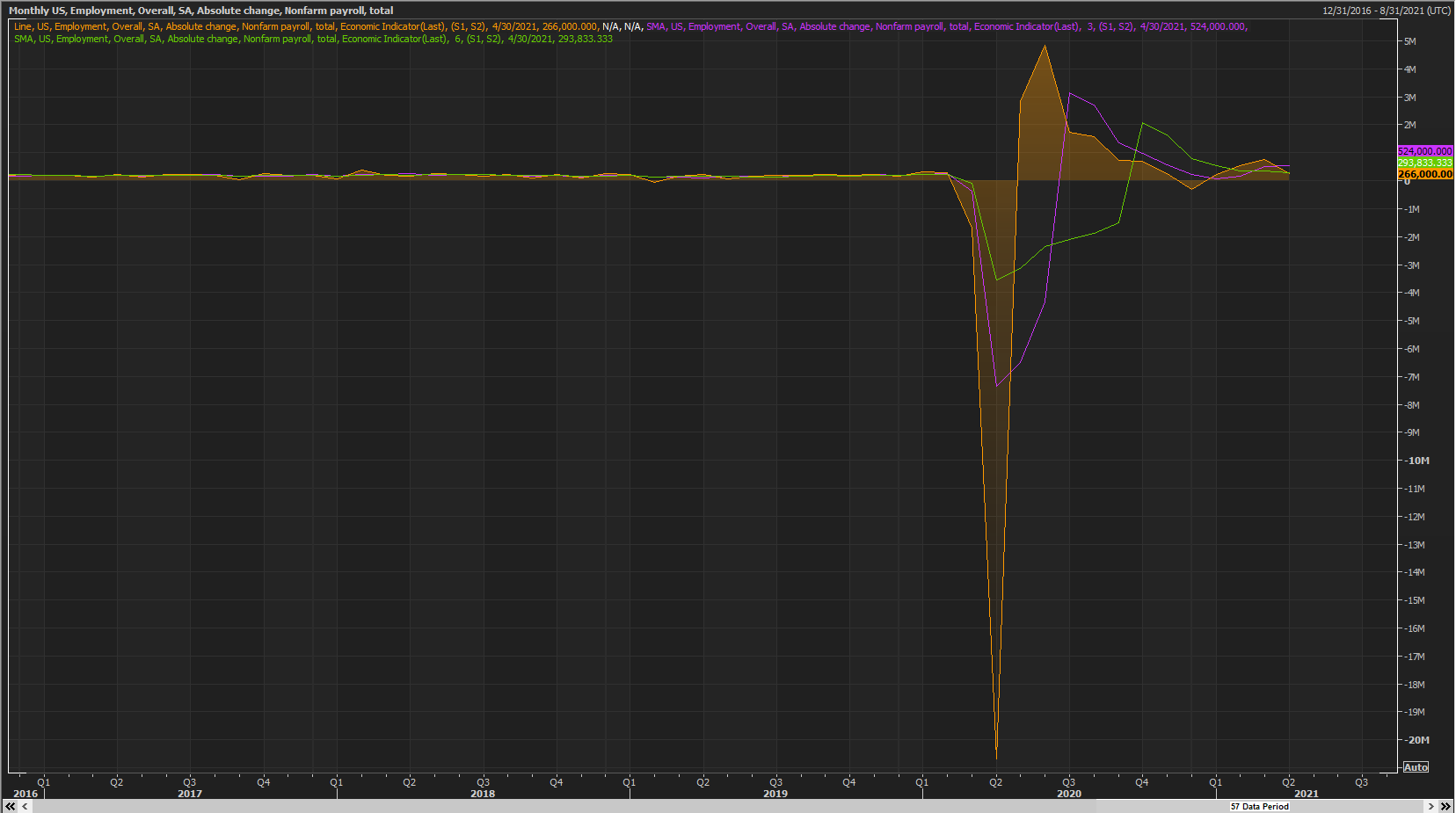 Actively seeking is defined as those who applied for work in the past four weeks. Americans not seeking employment during the preceding four weeks are no longer counted in the civilian labour force, and are, therefore, included in the civilian noninstitutional population (figure found at the top of the household survey table).

According to the BLS, and also evident from the graph plotted below, April’s measures are significantly lower than April’s (2020) pandemic highs of 14.8 percent, but at the same time higher than pre-pandemic levels of 3.5 percent.

The real unemployment rate (U-6)[2]—a broader view of unemployment than the official (U-3) release—represents the total of unemployed in the United States, including all persons marginally attached to the labour force and total employed part time for economic reasons (The BLS notes that marginally attached are those who currently are neither working nor looking for work but indicate that they want and are available for a job and have looked for work sometime in the past 12 months. Discouraged workers, a subset of the marginally attached, have given a job-market related reason for not currently looking for work. Persons employed part time for economic reasons are those who want and are available for full-time work but have had to settle for a part-time schedule). As you can see, the official release is artificially depressed.

April’s U-6 unemployment figure came in at 10.4 percent, down 0.3 percentage points from March‘s 10.7 percent reading—the lowest reading since March 2020.  It is also worth noting that April’s 2020 pandemic high came in at an eye-popping 22.9 percent, while the U-3 official release was, as noted above, 14.8 percent.

May’s official US headline unemployment reading is forecasted to tick lower at 5.9 percent.

Calculated by the Establishment Survey, average hourly earnings is another key metric watched by economists and investors, measuring the amount private employees earn each hour in the United States.

In April, average hourly earnings suggested rising demand for labour, increasing by 0.7 percent from March’s -0.1 percent reading—this is the highest percentage print this year. (average hourly earnings for all employees on private nonfarm payrolls increased by 21 cents to $30.17, following a decline of 4 cents in the prior month—a touch higher than April’s 2020 reading of $30.07).

The importance of this measure is relatively self-explanatory. The more income a worker earns bodes well for future spending. It is an important indicator of labour cost inflation—one of the data points the United States Federal Reserve pays close attention to when formulating interest rate decisions.

The consensus for May’s average hourly earnings is forecasted to decline 0.2 percent. 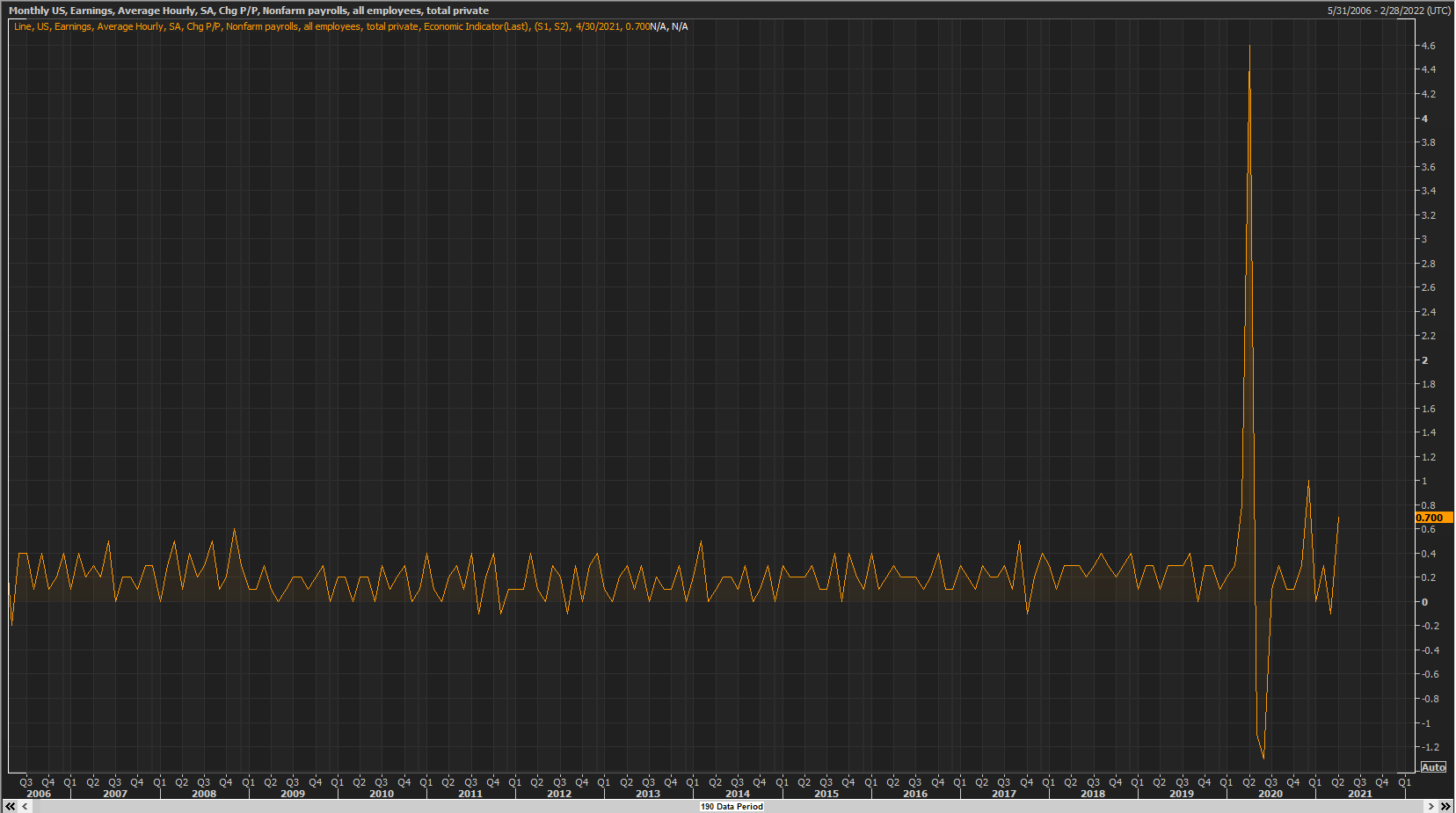 the US dollar index (ticker: DXY) provides traders and investors a benchmark value—a weighted geometric mean—of the US dollar relative to a basket of six major foreign currencies, including the euro (boasts the largest weighting of approximately 57.6%), Japanese yen, British pound, Canadian dollar, Swedish Krone and Swiss franc. Knowing Europe’s single currency plays a large role in the makeup of the DXY, it’s important to acknowledge the EUR/USD and DXY tend to be inversely correlated, as displayed in figure 1.A.

To gather an overall picture of the US dollar’s position ahead of today’s US employment release, the research team has analysed—from a technical perspective—the US dollar index according to the long-term monthly timeframe, the daily timeframe, as well as the H1 timeframe.

From the monthly chart, technicians will note April spun lower from a trendline support-turned resistance, extended from the low 72.69, with May extending downside to within striking distance of support from 88.55 (note we also have a 50% retracement level nearby at 88.28 and a 61.8% Fib at 88.27).

A closer reading of price action on the daily scale shows we recently breached the upper side of what’s known as a declining wedge pattern (91.43/90.42). This—given the bearish narrative since March 31st peaks at 93.43—is likely considered a reversal signal, with buyers taking aim at 90.91 (the wedge pattern’s take-profit target, derived from taking the base measure and extending this value from the breakout point [red]).

As for trend on this timeframe, we can, in line with monthly price action, see this market has been entrenched within a downtrend since topping in early March 2020, just south of the 103.00 figure.

Also notable on the daily chart is we’re coming from support at 89.67 and, in recent days, elbowed north of resistance coming in at 90.10 (now labelled support).

Ultimately, traders are likely expecting a bearish reaction off 90.91, as sellers look to fade into the current pullback.