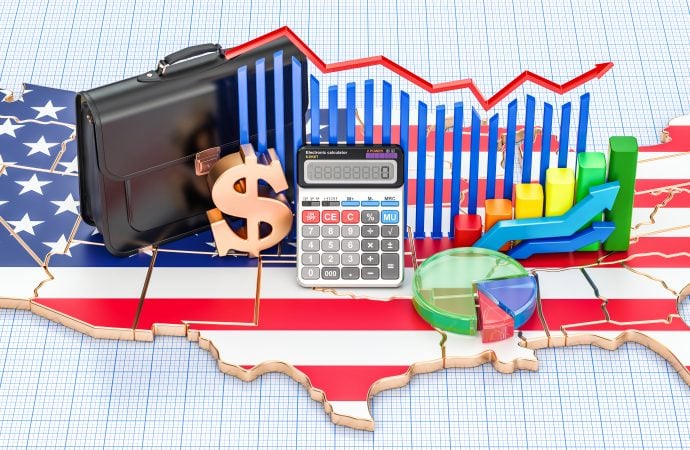 US employment figures deliver an unparalleled insight into the condition of the world’s largest economy. The report is considered a leading indicator of consumer spending.

According to the US Bureau of Labour Statistics (BLS), total non-farm payroll employment fell by an eye-popping 20.5 million in April, though slightly bettered the 22 million consensus. The release also highlighted the employment situation in leisure and hospitality plunged 7.7 million, or 47%. And almost three-quarters of the decrease occurred in food services and drinking places (-5.5 million)[1]. This data demonstrates the impact COVID-19 has inflicted on the US economy.

Going forward, the BLS expects to announce an 8 million decline in payrolls for May.

April’s unemployment rate increased by 10.3 percentage points from 4.4% to a whopping 14.7%. According to the BLS[2], this is the highest rate and the largest over-the-month increase in the history of the series (began in January 1948). The number of unemployed persons rose by 15.9 million to 23.1 million in April, reflecting the effects of the COVID-19 pandemic.

Market expectations for May is forecast to rocket to 19.8%, from the 14.7% reading in April.

At the beginning of the month, according to the Institute for Supply Management (ISM), May’s manufacturing PMI registered 43.1, up 1.6 percentage points from the 41.5 April reading. This figure indicates expansion in the overall economy after April’s contraction[3].

Represented by way of a diffusion index, ISM noted:

The ISM, on Wednesday, stated non-manufacturing activity increased to 45.5 in the month of May, 3.6 percentage points higher than April’s 41.8 reading, the lowest since early 2009. The previous two readings, therefore, represent contraction in the non-manufacturing sector, following a 122-month period of expansion[4].

‘Current operations have been reduced to accommodate a slowed economy, but the business is taking time to review operation and implement more efficient processes. Purchasing has slowed for client facing goods/services but has increased for internal operating supplies/services’ (Accommodation & Food Services).

The Employment Index increased to 31.8; 1.8 percentage points higher than April’s reading of 30. This denotes a slower rate of change, though still advertises contraction, suggesting there’s not been much interest in hiring.

The release estimates the number of employed during the prior month, excluding the farming and government industry. ADP is widely considered a forerunner to today’s government-released employment data.

Private sector employment decreased by 2,760,000 jobs from April to May, according to the May ADP National Employment Report[5]. The count came in far below the 9 million estimate, indicating the worst may be behind us, providing hope as the country begins re-opening its doors.

‘The impact of the COVID-19 crisis continues to weigh on businesses of all sizes’, said Ahu Yildirmaz, cohead of the ADP Research Institute. ‘While the labour market is still reeling from the effects of the pandemic, job loss likely peaked in April, as many states have begun a phased reopening of businesses’.

The Michigan survey of consumer sentiment is a monthly telephone survey of approximately 500 households.

Consumer confidence, according to the University of Michigan consumer survey index, remains steady in the low 70s after dipping from north of 100.0 in February. This suggests we may be establishing a bottom[6].

US initial unemployment claims totalled 1.877 million last week, broadly in line with consensus of approximately 1.820 million. While the level of unemployment remains high, jobless claims data suggests we may be over the worst of the COVID-19 job’s crisis.

The Department of Labour noted:

‘Even as states reopen, claims in the millions are an indicator that the economic pain of the COVID-19 crisis is still acute’, Daniel Zhao, senior economist at job placement site Glassdoor, said to CNBC.

While economic Indicators suggests the rate of deterioration in the economy is perhaps slowing, albeit still at a precarious stage, the technical outlook for the US dollar index, a measure of the buck’s value against a basket of six major currencies, offers an interesting perspective.

Recent trade, by way of eight consecutive daily bearish candles, observed price action slice through the lower limit of a bearish pennant configuration (98.27), subsequently taking on the 200-day simple moving average at 98.47 and demand from 98.18/98.65.

Clearance of these areas recently threw light on demand at 96.88/96.60, an area reinforced by a 78.6% Fib ret level nearby at 96.40. Additionally, traders will note the possibility of moves forming as far south as 93.97 over the coming weeks: the bearish pennant take-profit target, measured by taking the preceding move and adding the value to the breakout point (yellow).

According to the technical picture, worse-than-expected data indicates a move through the 78.6% Fib ret level at 96.40. Upbeat data, on the other hand, may see candles recover from current demand and eventually seek a retest scenario at the underside of 98.18/98.65.

Indicator-based traders will also acknowledge the RSI oscillator recently approached oversold territory, after fluctuating around its 50.00 value since the beginning of May.