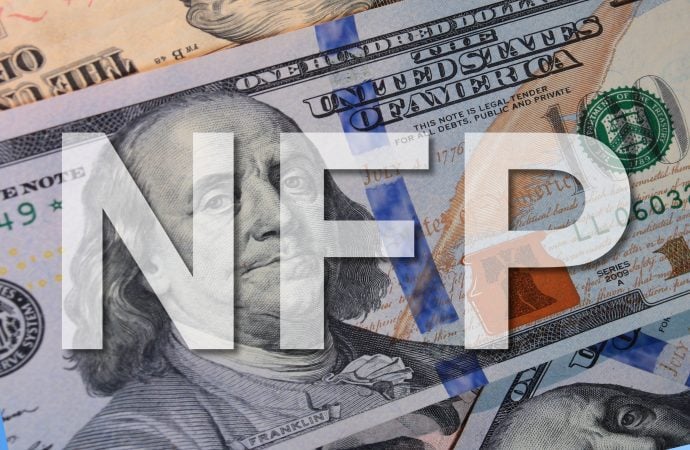 Due to its timeliness, accuracy and importance within the broader economy, the employment situation report—often referred to as the non-farm payrolls release—is a closely monitored indicator.

As well as a leading indicator of consumer spending, non-farm payrolls represent a measure of new payrolls added by private and government organisations across the United States (US), reported each month by the Bureau of Labour Statistics (BLS)[1].

Two comprehensive reports are used to cover the unemployment rate (the household survey) and the headline non-farm payrolls (the establishment survey). In most cases, the non-farm payrolls release attracts the majority of the attention, often vibrating through financial markets. A positive number reveals additional jobs were added to the economy, while a negative number, displayed as -100k or -90k, means jobs were lost in non-farm business.

According to the BLS[2], job gains were noted in professional and business services along with both public and private education. However, this was counterbalanced by declines seen in leisure and hospitality, retail trade, health care, as well as transportation and warehousing.

The general consensus range for February’s US non-farm payrolls is for an increase between 185,000 and 200,000.

The unemployment rate is a closely followed economic indicator, derived from a monthly survey called the Current Population Survey (CPS), made up of approximately 60,000 households[3].

This means the number of unemployed decreased to 10.1 million, but despite the report noting its ninth consecutive decline, following April 2020 highs, the unemployment rate remains well above pre-pandemic levels in February 2020 (3.5 percent and 5.7 million, respectively).

February’s unemployment reading is forecasted to remain unchanged at 6.3 percent.

Average workweeks for non-farm employees increased to 35 hours in January, from December’s 34.7 hour print. Notably, the workweek in manufacturing increase by 0.3 hours to 40.4 hours.

The consensus estimate for February’s average hourly earnings is anticipated to remain unchanged at 0.2 percent.

Private sector employment, according to the ADP National Employment Report[4] released on Wednesday, increased by 117,000 in February.

By company size, medium-sized business of 50–499 employees witnessed the largest increase at 57,000. By sector, the service-providing industry added 131,000 jobs, with trade/transportation and utilities adding 48,000 new payrolls.

‘The labour market continues to post a sluggish recovery across the board’, said Nela Richardson, chief economist, ADP. ‘We’re seeing large-sized companies increasingly feeling the effects of COVID-19, while job growth in the goods producing sector pauses. With the pandemic still in the driver’s seat, the service sector remains well below its pre-pandemic levels; however, this sector is one that will likely benefit the most over time with reopenings and increased consumer confidence’.

Data are based on surveys of purchasing managers nationwide. Survey respondents are asked if they are experiencing a higher, lower or no change in activity for each of the 10 components, including New Orders and Employment.

The release, which provides timely information on manufacturing, offers investors and traders a window into business activity, in addition to some insight into what the non-farm payrolls release might be.

Headline manufacturing data, according to the Institute of Supply Management (ISM)[5], recorded a nine-month expansion in February, following March, April and May’s contraction. The manufacturing PMI recorded 60.8 percent, increasing by 2.1 percentage points from January’s print of 58.7 percent. A headline number above 50 is consistent with both manufacturing and economic expansion.

‘The Manufacturing PMI continued to indicate strong sector expansion and US economic growth in February. Four of the five subindexes that directly factor into the PMI were in growth territory and at a higher level compared to January’, says Timothy R. Fiore, Chair of the Institute for Supply Management.

‘For the sixth straight month, survey panellists’ comments indicate that significantly more companies are hiring or attempting to hire than those reducing labour forces’ said Fiore.

An Employment Index above 50.6 percent, over time, is generally consistent with an increase in the Bureau of Labour Statistics (BLS) data on manufacturing employment.

Of the 18 manufacturing industries, 11 industries reported employment growth in February.

Interestingly, all but the Inventories and Customers’ Inventories Indexes remained in expansionary territory in February. Overall, the manufacturing sector continues to grow, pencilling in a ninth consecutive month of growth.

Figures above the 50 percent mark suggests expansion in manufacturing; under 50 percent indicates a contractionary phase.

Each month the Conference Board surveys a nationwide sample of 5,000 households, consisting of a questionnaire. The report gauges individual (household) confidence levels concerning the performance of the economy.

According to the Conference Board[6]:

‘After three months of consecutive declines in the Present Situation Index, consumers’ assessment of current conditions improved in February’, said Lynn Franco, Senior Director of Economic Indicators at The Conference Board. ‘This course reversal suggests economic growth has not slowed further. While the Expectations Index fell marginally in February, consumers remain cautiously optimistic, on the whole, about the outlook for the coming months’.

Overall, we have been forming a consolidation (a potential bottom) around (85.70) since April 2020 (COVID-induced lows).

An uptrend in the index is generally viewed as positive for the economy and can bode well for the upcoming non-farm payrolls release, while a sustained downtrend is typically interpreted as bearish.

Measured by the Department of Labour[7], unemployment claims represent the sum of first-time claims for state unemployment insurance. Because data are released weekly, this is a widely watched indicator.

Initial first-time unemployment claims inched higher last week. The Labour Department, for the week ending February 27, noted the advance figure for seasonally adjusted initial claims was 745,000, an increase of 9,000 from the previous week’s 736,000 revised level (consensus: 758,000). As you can see from the chart, initial claims have levelled off since August 2020, with claims capped under the 890,000 mark.

Despite economic indicators pointing to somewhat healthier employment, the US dollar’s technical picture, as measured by the US dollar index, remains bearish.

Kicking off from the top, monthly price structure dethroned a long-term trendline support (72.83) in December (2020) and in February retested the underside of the ascending base. To the downside, technicians likely have support at 88.65 on the radar. Further downstream, however, notable support resides around 83.22, joined by a number of Fib levels (Fib cluster).

Depending on the structural view one takes regarding swing points, the broader outlook (black arrows) shows a major downtrend in play. Price topped around the 103.00 level (between 2017 and 2020), following a deep pullback from 2008. Continuation lower, according to the trend, therefore, is potentially on the table over the coming months/years.

The technical landscape on the daily scale reveals the US dollar has been firm, following the mid-week trough at 90.63.

Additional points of note on this timeframe are the trend, launching a series of lower lows and highs since topping in early March 2020, and the 200-day simple moving average hovering just above the 92.29/91.95 resistance zone. In addition, the RSI indicator trades within striking distance of the overbought range.