Lesson 4: What is Technical Analysis?

1. What is Technical Analysis?

Charles Henry Dow—the founder of the Dow-Jones Financial news service and the founder of the Wall Street Journal—is considered by many technical analysts (or ‘chartists’) as the ‘father’ of modern technical analysis. Dow was the first to establish an index in 1896 that measured price moves in US-based equities, now recognised as the Dow Jones Industrial Average. Nevertheless, it’s important to note that the first index created by Dow was the Dow Jones Railroad Average in 1884, acknowledged today as the Dow Jones Transportation Average.

While Dow never formulated his principles into text, Robert Rhea refined Dow’s work and wrote a book in 1932 called The Dow Theory: An Explanation of its Development and an Attempt to Define its Usefulness as an Aid to Speculation. The evolution of Dow Theory is best described in Rhea’s book, with a key focus on trend structure. Rhea presented three basic trends, the primary trend, the secondary trend and the minor trend. 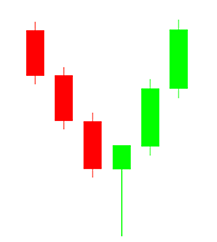 Three types of price charts commonly used by technical analysts to view price data are the line chart, the bar chart and the Japanese candlestick chart.

• A line chart is presented in the shape of a continuous line, often calculated by way of closing prices.

• The western bar chart—sometimes referred to as ‘OHLC’ charts—presents the open, high, low and close (OHLC) data of each bar printed across different time periods (or timeframes).

• A Japanese candlestick chart delivers a variation of the OHLC values which, for many traders, is easier to analyse. The key difference between a bar and candlestick is the candlestick’s ‘real body’ (between opening and closing price action) allow traders to quickly determine price direction—bar charts display the body by way of a vertical line.

The main objective of technical analysis is to create a trading edge through market patterns, statistics and risk management, all of which should be detailed in a well-defined trading plan to highlight trading opportunities.

Technical analysts have a plethora of tools at their disposal. Beginner traders and investors must understand the mechanics behind each technical indicator and drawing tool used before applying them to generate trading signals.

Trendlines are one of the first drawing tools most up-and-coming technicians learn about. Primarily functioning to help market participants define trend, trendlines function well as ascending and descending support and resistance.

An upward trend line, or an ‘uptrend line’, develops when prices experience higher highs and lower lows. By linking the rising lows, an upward trendline is formed. A trendline tracks the progress of a rising market and provides early signs of a trend reversal (or downtrend) in the event of a breach.

Well-known bullish and bearish chart patterns are the head and shoulders pattern, double-bottom and double-top formations, as well as triangle structures, flags and pennants. Each configuration is organised by way of clear guidelines which must be followed in order to take advantage of the pattern’s predictive capability.

Smoothing out market data over a defined period of time, moving averages are a common view on trading charts.

The MACD is a combination of a trend-following indicator and momentum indicator, showing a connection between two moving averages of a security's price.

A momentum oscillator that measures the ‘speed of price change’ to establish whether a stock or currency pair is overvalued (overbought) or undervalued (oversold).