the percentage of traders who currently have (or had) an open buy or sell position in a symbol.

The figures are not technical analysis based on price action. They are calculated from realmoney accounts which are being published to www.fxblue.com. For example:

• 5845 real-money accounts publishing to www.fxblue.com have an open buy position
in EURUSD, and 2378 accounts have an open sell position. The app will show that
the EURUSD sentiment is 71% long.

The list of available symbols is determined by popularity, i.e. the number of people trading them. For example, sentiment data is not available for CADJPY because there are typically too few traders with an open position to calculate a meaningful percentage.

If a trader has multiple open orders in the same symbol, then the sentiment calculation uses a single net figure for the trader’s positions. For example, if a trader has an open buy order for 1.5 lots and an open sell order for 0.7 lots, then they are treated as being long.

The Sentiment Trader shows the current long/short sentiment (25% long in the following example), and a chart of historic sentiment plotted against price action. In the example below, sentiment has remained consistently below 50%, i.e. a majority of traders have been short EURUSD. 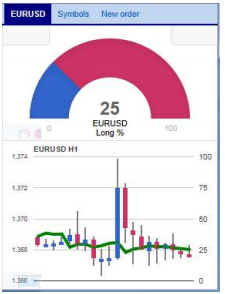 2.1 Changing the display of current sentiment

You can change the way that current sentiment is displayed using the pop-up bar in the bottom-left of the chart. There are three options: a dial; a pie chart; and a gauge (the default).

2.2 Changing the display of historic sentiment

You can change the way that historic sentiment is displayed again using a pop-up bar in the bottom-left of the chart: 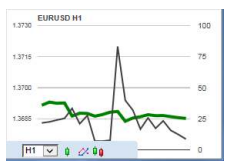 You can choose the timeframe for the historic chart (e.g. M5, H1), and three different types of chart:

• Price candles vs sentiment (the default)
• A line chart of close prices vs sentiment (as illustrated above)
• “Sentiment candles”: these show the range of sentiment values, rather than just the closing value, within each time bar (M5, H1 etc).

The boxes at the top of the display show any open position in the selected symbol. In the following example, the trader is long 0.1 lots EURUSD, and the current P/L of that position is a loss of 20.20:

You can switch between different symbols using the Symbols tab at the top of the app.

This displays a list like the example below which shows the symbols; the current long/short sentiment as a bar; any open position which you have in the symbol; and the P/L of the open position.

You can switch the main display to a different symbol by clicking on its name in this list. 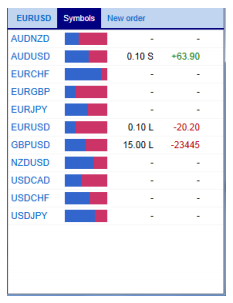 [Please note: the order tab is not available on the tradable platform] 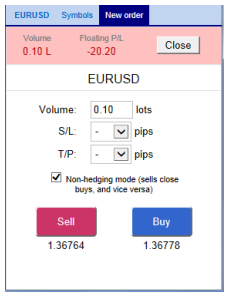