Developed in 1979 by Gerald Appel, the MACD, or Moving Average Convergence Divergence, has proven a dependable and versatile indicator within the field of technical analysis. Technical analysts employ the MACD across different financial instruments and time periods (timeframes), yet many claim higher timeframes provide more reliable results.

At its core, the MACD operates as a trend-following momentum indicator, displaying the convergence and divergence of two moving averages derived from underlying price action. Two exponential moving averages, or EMAs, are calculated by subtracting the two values which leave users with a single dynamic line (MACD line) that oscillates above and below a zero-line. Additional components of the indicator are the signal line and a histogram. Technically, the MACD serves as a lagging indicator as it works with moving averages which are inherently a lagging component. Still, the MACD is also used as a divergence indicator, thus essentially providing a blend of lagging and leading signals.

According to many technical traders, the MACD is efficient and complements most trading strategies, with the ability to analyse different asset classes such as foreign exchange (Forex), individual shares, equity indices, commodities, and cryptocurrencies.

The formula to calculate the MACD is straightforward:

The MACD line is an important component and is formed by subtracting the 26-Day EMA from the 12-Day EMA. To be clear, if working with timeframes lower than the daily chart, the MACD line is formed through the chart’s time period. As an example, trading on the H1 timeframe calculates the MACD line as follows: 26-hour EMA - 12-hour EMA.

Once the MACD line is computed, the signal line can be determined. This is found by calculating a 9-day EMA of the MACD Line and is presented as an additional moving average alongside the MACD line.

Designed by Thomas Aspray in 1986, the final component in the indicator is the MACD histogram, computed by subtracting the MACD line and the signal line values which display vertical bars (histogram) that oscillate around a zero-line. What this offers market participants is a measure (or spread) between the MACD line and signal line.

A zero-line crossover involves the MACD line crossing beyond the zero-line. Depending on the timeframe and underlying trend strength, the MACD can remain above/below its zero-line for prolonged periods.

Nonetheless, it must be noted that—similar to other crossover methodologies—bullish and bearish signal line crossovers can yield false signals and are inherently lagging. This means a crossover signal transpires after an up or down move materialises.

As an unbounded indicator, determining overbought and oversold conditions is problematic. Chartists attempt to combat this by estimating historical extremes through a simple visual assessment, similar to how technicians apply traditional support and resistance areas on a price chart.

Figure 1.3 shows an upper boundary of resistance applied to the indicator that performs as an overbought indication. Identifying the lower boundary is more complicated on the selected chart, due to data outliers in July 2016 and at the height of the COVID pandemic in March 2020. In this case, numerous oversold regions can be used to include all scenarios.

Divergence is a popular leading measure in the MACD, representing a discrepancy between price movement and the MACD line. At its simplest, traders look for regular bullish and bearish divergences to identify a potentially weakening market. Note that closing prices are used in the calculation and, therefore, closing prices should be used to mark price divergences (not upper and lower shadows).

Price action forms lower lows (and lower highs) and confirms the downtrend while the MACD line shows an advance (higher lows/highs); this is referred to as regular bullish divergence. This informs the user that sellers could be running out of steam (momentum to the downside is slowing) and a reversal may unfold.

If the price forms higher highs/lows and the MACD line declines to form lower lows/highs, the indicator is displaying bearish divergence. The price high confirms the current uptrend, but the lower high on the MACD indicates less upside momentum. And slowing upside momentum can sometimes foreshadow a trend reversal or a sizable move to the downside.

More advanced traders occasionally adopt hidden divergence. Hidden divergence is referred to as hidden because it’s not always obvious. This tends to occur within an existing trend and can specify strength, informing traders that the trend may resume. Hidden divergence is similar to regular divergence—where the price and MACD line move oppositely, though price takes more of a leading role in this case.

It’s important to understand that regular and hidden divergence are not in place to deliver clear entry signals; they’re designed to indicate weakness (or strength) of the underlying trend.

For those who prefer a drawn diagram regarding divergences, figure 3.2 provides an in-depth illustration. 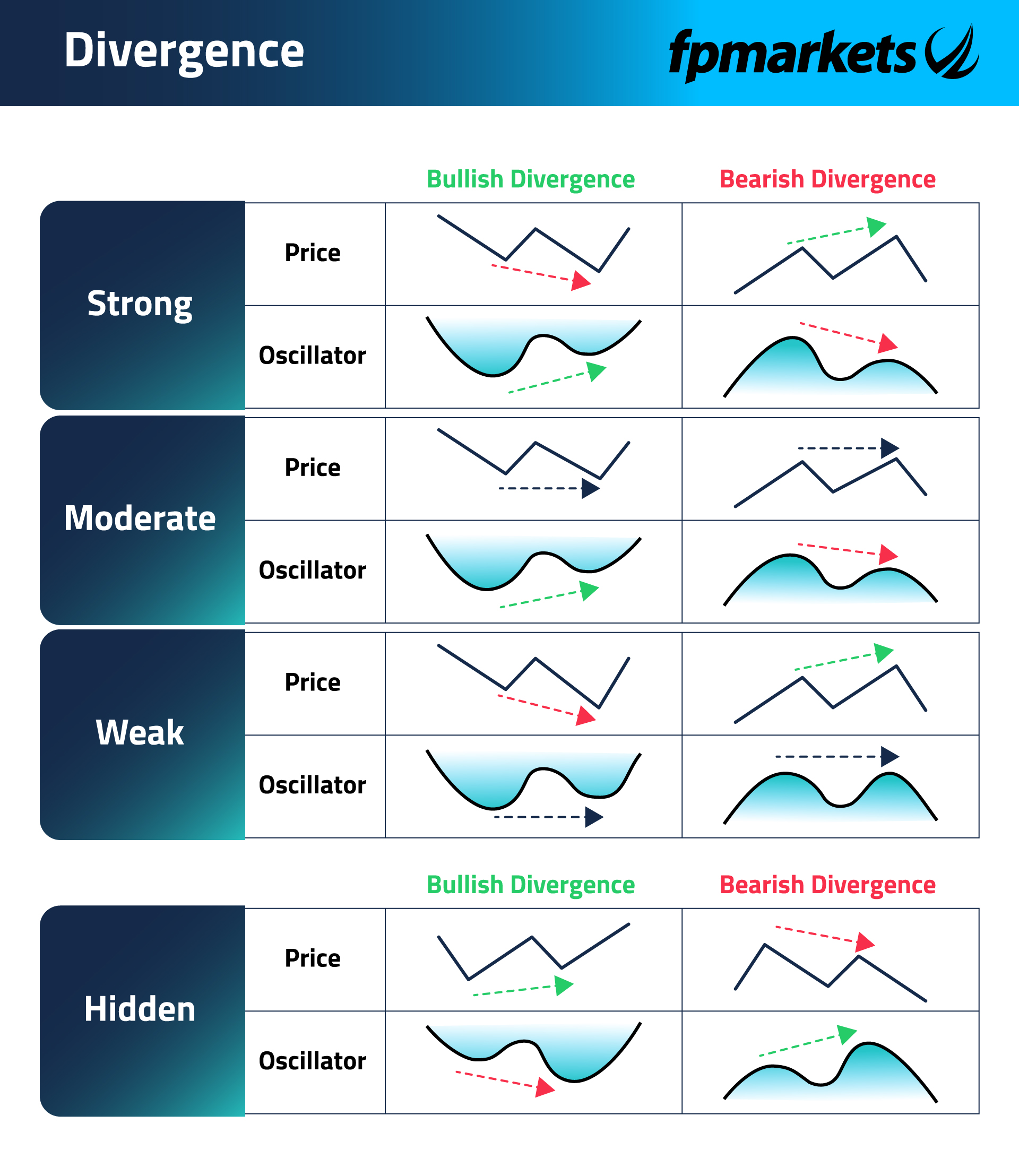 The MACD histogram is used to help forecast—through divergences—bullish and bearish signal line crossovers. Think of this as a leading indicator of a crossover.

While additional MACD strategies are available, the article has highlighted the basics to get you started. Ultimately, though, how traders choose to use the MACD is down to their individual trading style. The majority of technical analysts use the indicator to confirm. This could mean confirming additional technical indicators or even price levels, such as support and resistance.