Equities and commodity futures markets dislike uncertainty, it is often said the market will sell first and ask questions later. It is one of the key elements of trading and investing for the short term and long-term players to understand. Often we ask why prices are moving the way they are, when the market is doing the thing it was invented to do, price in the future.
Indices here in Australia, in the USA and Europe have failed to post fresh highs as the impact of a potential 2nd wave of Covid19 is now being priced in.

Commentary around the unsustainability of continued money printing continues flow through and prime the precious metals markets.

The potential for another Global slowdown has also dented the enthusiasm for buying Oil, with the WTI contract consolidating at a key resistance level.

XJO WEEKLY
Price structure:
The XJO Index has again entered into a consolidation phase above 5700 and below 6200. Last week the IPd ( inside period, down close ) sits under the closing high (5998) from the 1st week of June. The #3 candle, a bar with a high body in the overall range, a sign of future short term weakness, is playing out.  However the underlying primary trend remains UP and this should not be discounted. Further price weakness may see the 5544 level tested as a retest of the breakout. Across the board price weakness within the Financials and Resources would be required to achieve this level. 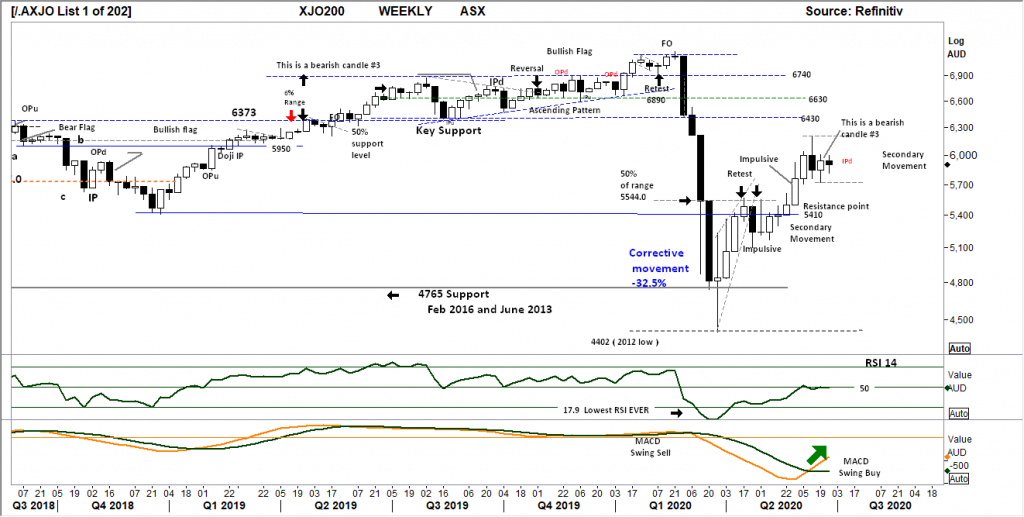 Comments from last week: While not unusual to see some profit taking after a strong run, last week prices traded below the low of the bar that made the high, a sign of weakening price momentum. The long lower shadow but high close off last week’s bar (#3) indicates early selling and is often associated as a warning of lower prices in the coming weeks.

A developing descending pattern remains incomplete with 2 lows (support) identified has the potential to break lower, with 5708 the key level.

Indicator:  Relative Strength
RSI has moved back to the 50 level showing balance in momentum, the potential move lower will be decisive as momentum changes.

Indicator:  VOLUME
Daily volumes remain mixed with a slight increase in Fridays positive close, this should be monitored for a directional bias. Should the market move lower an increase in volume would signal distribution. A price breakout higher above the descending pattern line should also be accompanied by an increase in volume, this will be telling in the coming days. 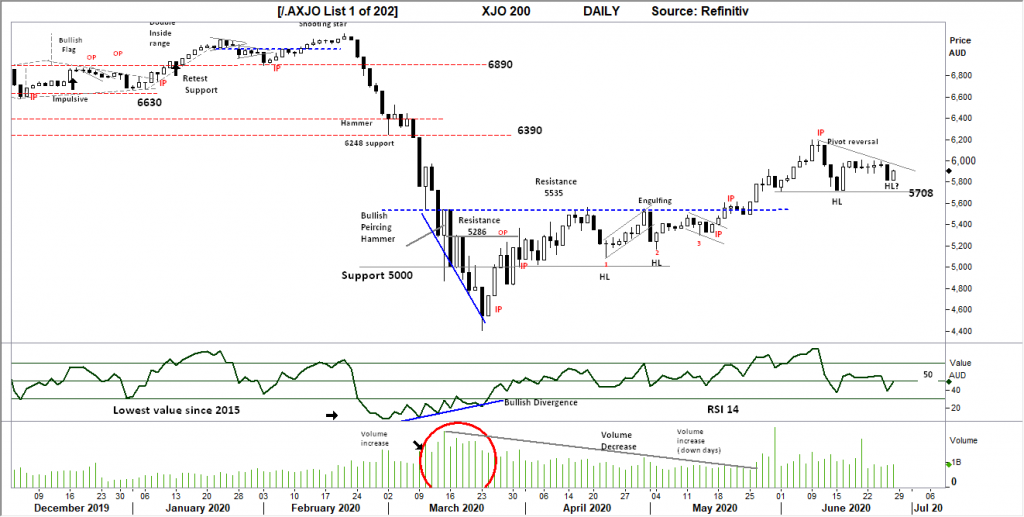 Comments from last week: 5850 will remain the daily closing level to hold in the coming week. Friday’s low close shows late week selling entering the market. A further breakdown would target the daily support level of 5535 being the original breakout point during the 4th week of May. While the Primary daily trend remains UP, price consolidation above 5850 would be very positive for further gains.

S&P 500 WEEKLY
Price structure:
The second week of “mid-point” rejection, with last week also an inside period, sets up a retest of 2940 and potentially lower at 2820.
The underlying Primary trend remains UP, however this is a very strong signal a reversal top is now in place. 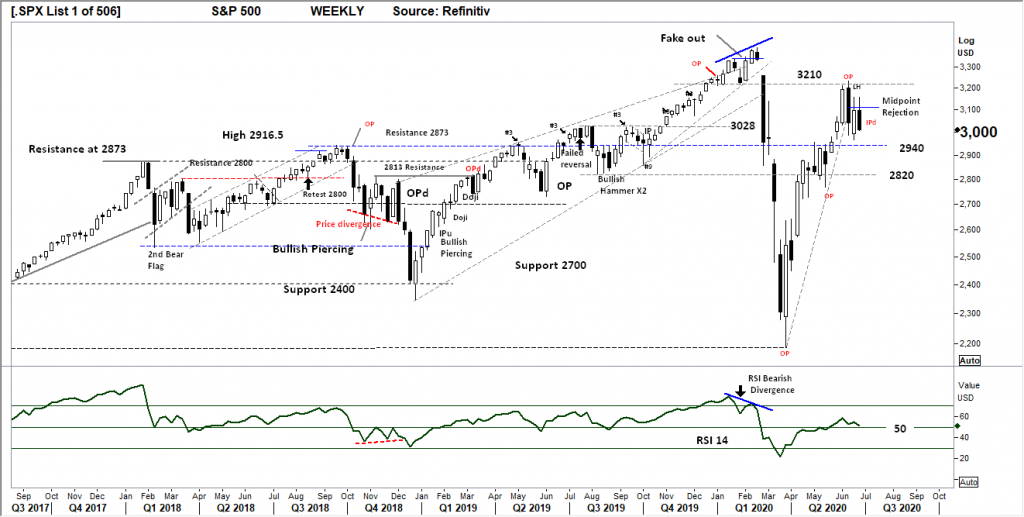 Comments from last week: An opening gap on Monday saw the market trade higher to meet bearish “mid point” resistance from the previous week. Without strong news, the potential for the Index to consolidate above 2940 and below 3210 is now in play. Important support levels remain in play at 2940 and 2820.

S&P 500 DAILY
Price structure:
The current developing “flag” pattern has the potential to breakout higher, (see RSI note). This type of flag pattern has a high percentage failure rate, the potential is to test lower level as the “island top” remains the key resistance area. The price GAP at the 2940 level seems the better target, this area would then be monitored for a reversal higher.

Indicator: Relative Strength
RSI signal line has rolled lower below the key 50 level, upward momentum has been lost, this suggests the developing Bullish flag will fail and show further downside. 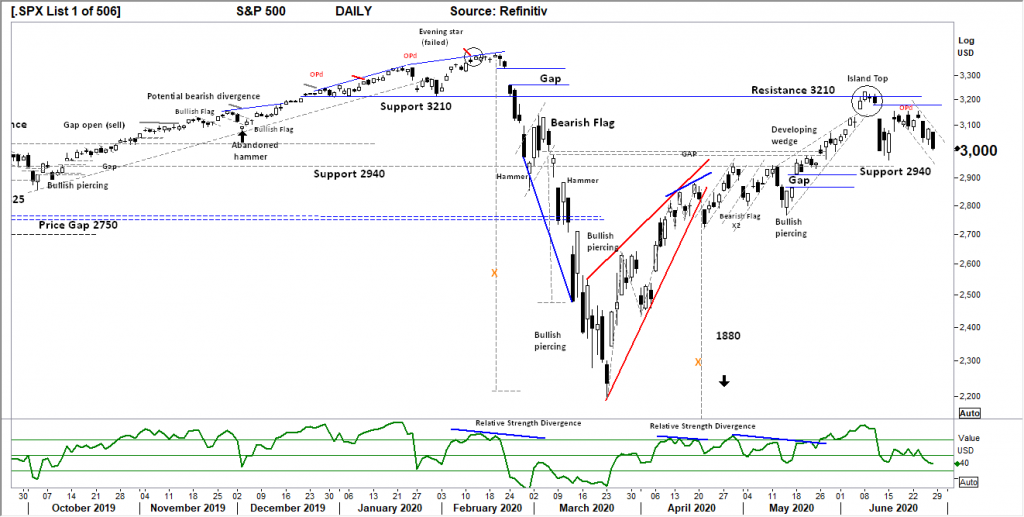 Comments from last week:  With a Monday open below 3000 followed by the sharp recovery has not followed thru to higher values. With Fridays gap open higher only to resolve into a OPd the warning is in for the market to move lower. Daily support at 2940 remains active on further declines in the coming week. The Gap from 2 weeks ago remains unresolved as does the Gap from February 2020.

GOLD – WEEKLY
Price structure:
The underlying price structure remains in a Primary UP trend. The whole world wants to be “long” Gold. On a breakout the Trader should be cognisant for a potential “Bull trap” scenario.The current breakout could be expected to show further gains in the coming week. Traders should be aware the breakout range is shorter than the consolidation ranges, showing lack of commitment by the buyers. Historically breakout can come back to test the original breakout level, in this case $1747.0. The breakout during Q3 2019 a case in point.

Indicator:  Relative Strength
Relative Strength remains positive above the “50” level but has not made a new high in line with the price chart. This sets up the potential for continued bearish RSI divergence. 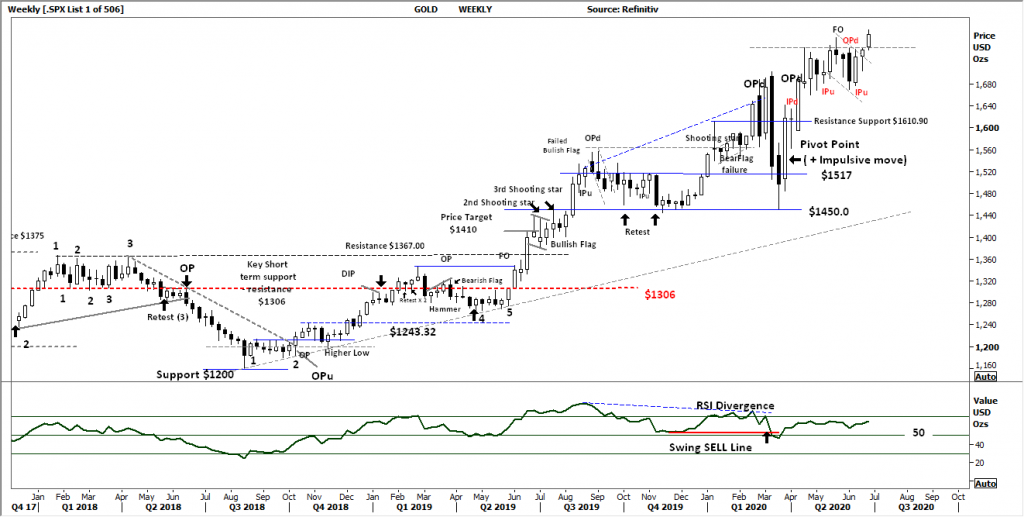 Comments from last week: There is a strong Technical picture to be long Gold at this level, however the bar last week has a lower shadow as the market probed for sellers. (an internal bearish signal). The key so-far will be a Weekly closing price over the $1747 level. Last week candle remained a shorter range than the previous week also pointing to slowing momentum. On a breakout the Trader should be cognisant for a potential “Bull trap” scenario.

AUD GOLD  DAILY
Price structure:
Friday’s OPu is a sign a short-term top may be in place, only an immediate continued move higher would negate this view.  Key level for the coming week will be $2563 as a major support level. The Daily trend is UP.

Indicator: Relative Strength
With the RSI now rising, the crossover of the 50 level is a good sign upward momentum may continue in the short term. 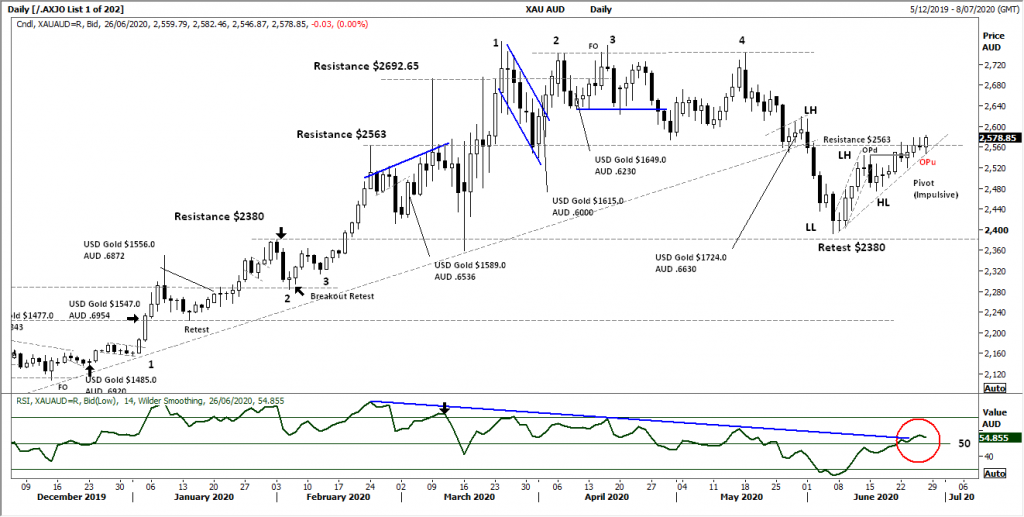 Comments from last week: A new higher low in place with Fridays impulsive move, also the completion of a Bullish pivot has to break resistance at $2563 to remain on track to retest the March, April, May highs. This week look for a close over $2563 as a bullish signal.

SILVER DAILY
Price structure:
Silver is an Industrial metal and will be responsive to improving economic news.
Gold makes a new high, silver does not make a new high. The OPd has the potential to set a short term top in place with $18.00 becoming intra day resistance, with further significant resistance at $18.40. Further consolidation could be expected below these levels with $16.50 remaining a major support level 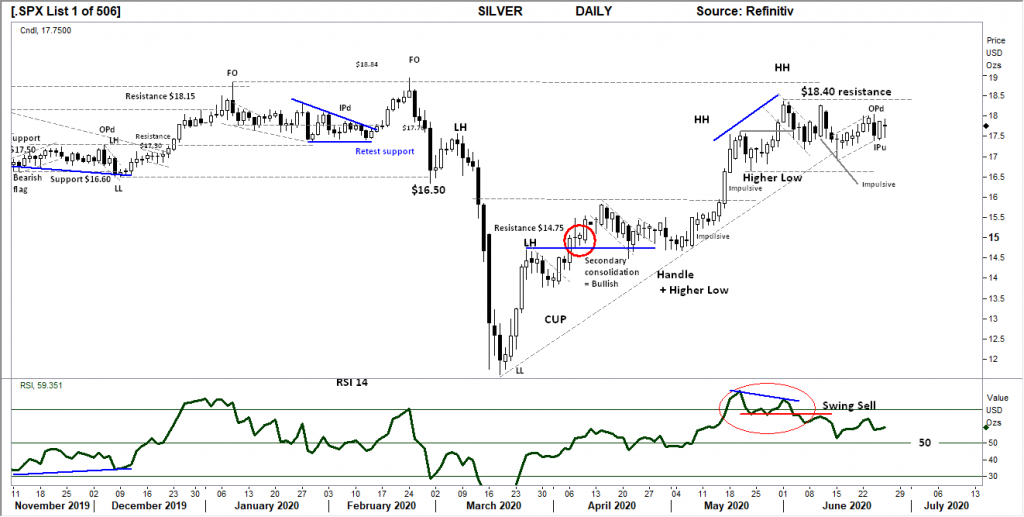 Comments from last week: Flag failure with a break of the tentative trend line, not a great look for Silver in the short term. The last 4 trading periods show a potential bearish flag that would again point to a retest of the $16.00 breakout level from Mid-May. To remain bullish silver requires a closing price movement over $18.50 in the coming days.  This type of bullish action would put the short term bear case away. The Technical view is for further range bound consolidation at this current level. 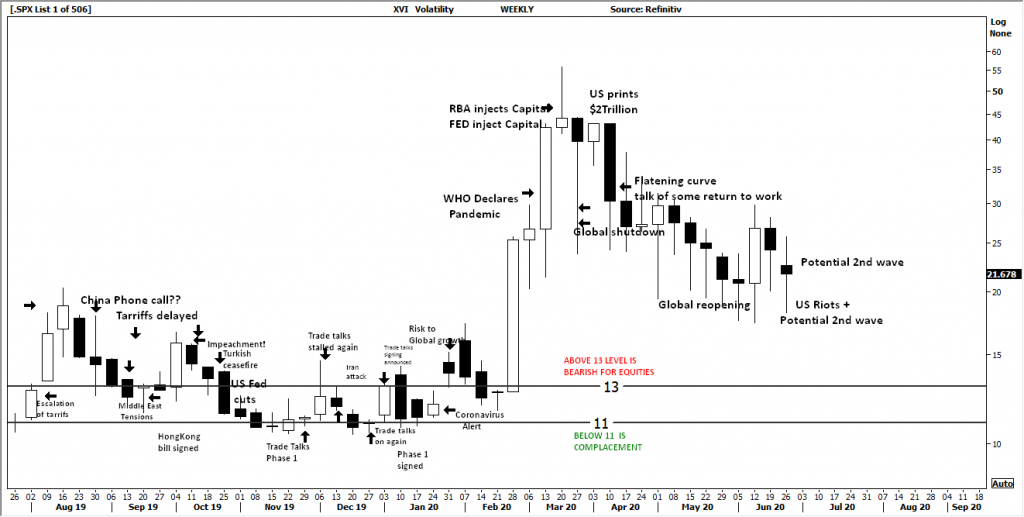 Comments from last week: It should concern traders the Volatility remains at elevated levels while the equities market is in a bullish phase, clearly the expectation of future price weakness is being priced in.

USD DOLLAR INDEX
Price structure:
A developing consolidation period as the DXY trades within the 96.40 – 97.75 range.
With the low close within the range on Friday a move lower would be expected to test the lower support level.
The key bearish level is a move below 97.00

Indicator:  Relative strength:
RSI shows a flattening move, below the “50” level, not a sign of strong momentum. 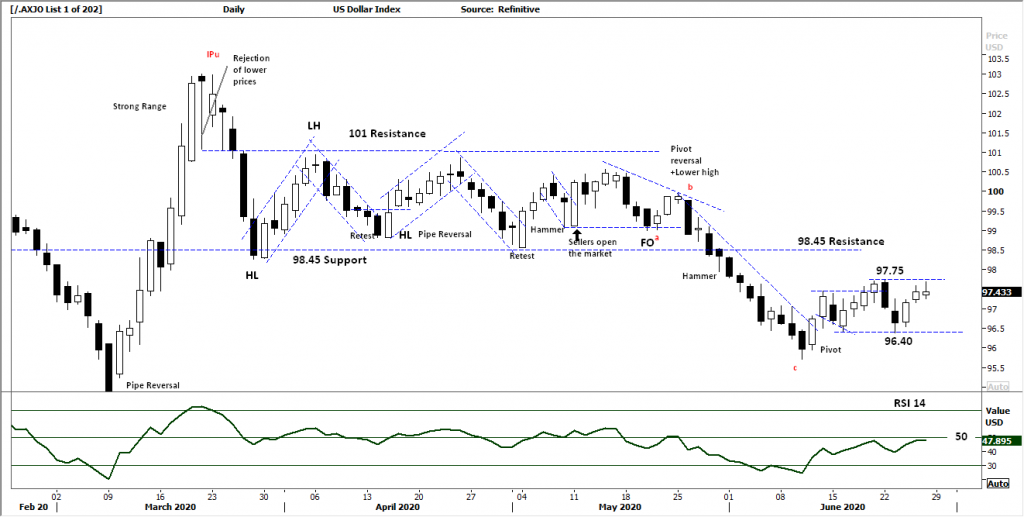 Comments from last week: Further gains possible as the USD Index works toward resistance at the 98.45 level in the coming days. The current daily range is strong with a high close on Friday boding well for further gains in the coming week.

WTI  CRUDE OIL
Price structure: This commodity is news driven
The $42.0 level remains the significant resistance level to be taken out on any move higher. Consolidation below this level for an extended time would be a bearish sign for a potential retest of the 29.20 level.
Overall the Primary trend remain Down. 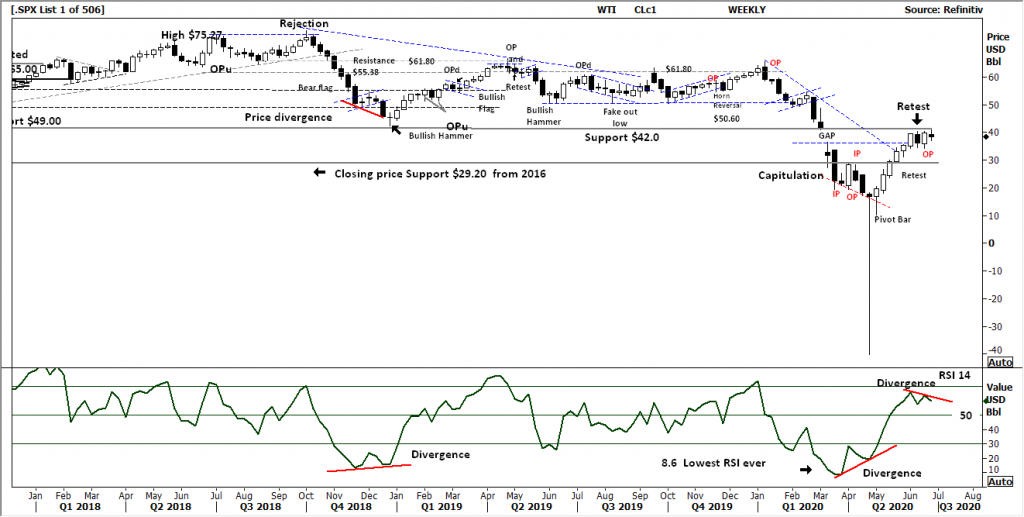 Comments from last week: Last week saw strong price recovery into the Friday close. Resistance remains at $42.00, with current underlying momentum a further price gain would be expected to fully close the current GAP and break above $42.00. In the coming week a close above $42.00 would place the next resistance level in play at $50.00 – $50.60. Last week’s low of $34.36 will be the point of weakness on any price retracement and put the $29.20 support level back into play.