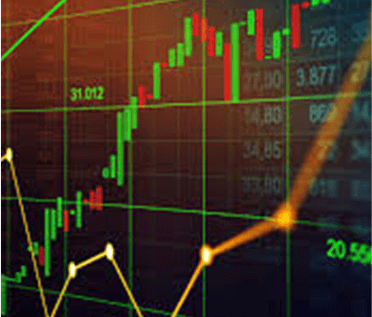 The WEEKLY chart of the XJO remains in a Primary UPTREND.

A short range week showing a loss of upward momentum. Traders would look for the 7000 level to hold.

A further break down would target 6893 as a retest of the initial breakout from the ascending pattern.

RSI remains over the key 50 level and turning sideways, a sign of decreasing price momentum.

MACD has turned BULLISH as both averages move higher. ( This indicator is often slow to react to sharp changes in price.)

7300Remains as the long term target. 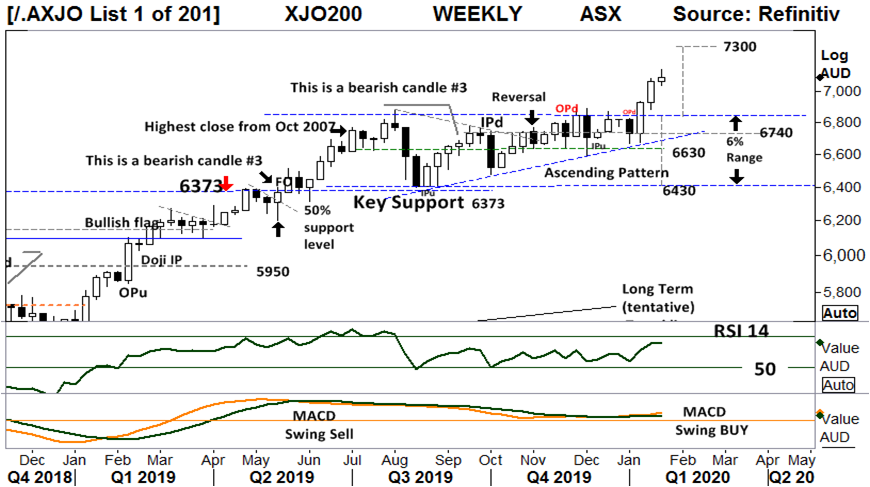 With a solid breakout and follow through, 7300 remains as the extension target. Long periods of consolidation often lead to extended price breakouts, look for the Financials to continue to lift the Index higher

The recent move over 70 shows very strong price momentum, with the rollover also indicating the completion of an exhaustion move.

With the current double inside range bars, a move lower could be expected in the coming days. 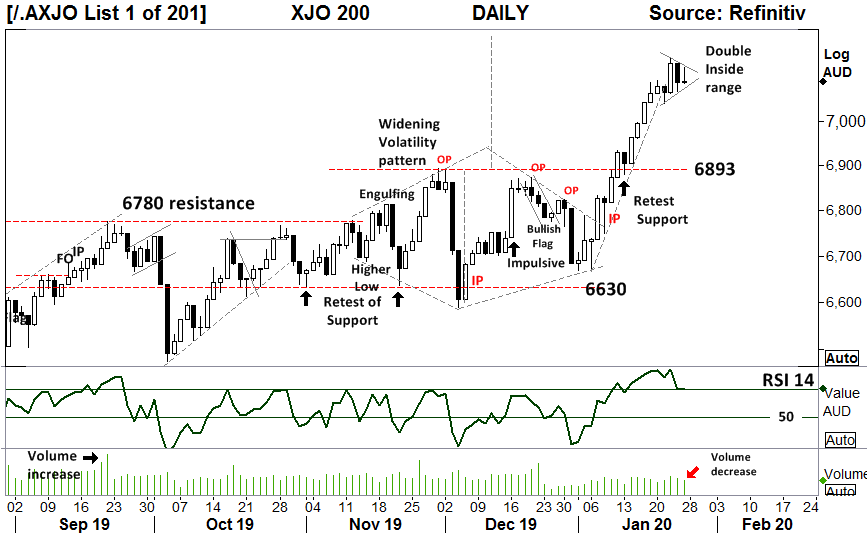 Following Mondays “retest” of the breakout the market has displayed a significant primary move higher to record highs. Psychological support should be developing at the round 7000 point level.
Currently the technical support level remains at 6893.

The Primary UP trend remains in place. As Volatility measures remain high.

On a weekly basis the SPX requires a close over 3300 to remain bullish in the short term.

The current down close bar following two strong range weeks sets the tone for profit taking in the near term.
Relative strength has turned down and remains over the “70” level, RSI must remain above the key 50 level in the coming weeks to remain bullish.

The larger technical view shows this market may trade out to 3600 points before any meaningful retracement. 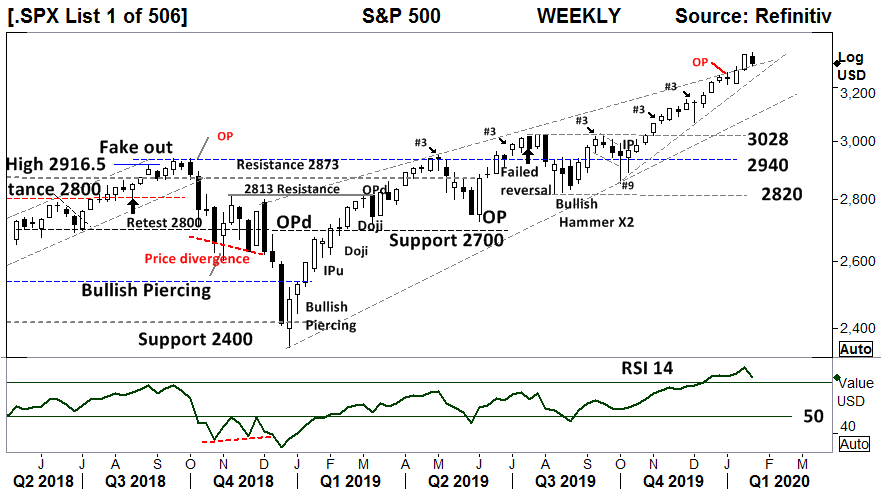 The S&P Index continues to defy all technical indications of a top in place or provide any significant reversal. The current breakout over 3300 remains very bullish as this “wedge” accelerates higher.

The primary Up trend remains in place.

A daily close below 3212 would be a bearish sign for further a retracement.

Bearish divergence has again developed  as the Relative Strength shows a lower high and moves below the “70” level, this is a significant sign of slowing price momentum.  The swing SELL signal is in place. 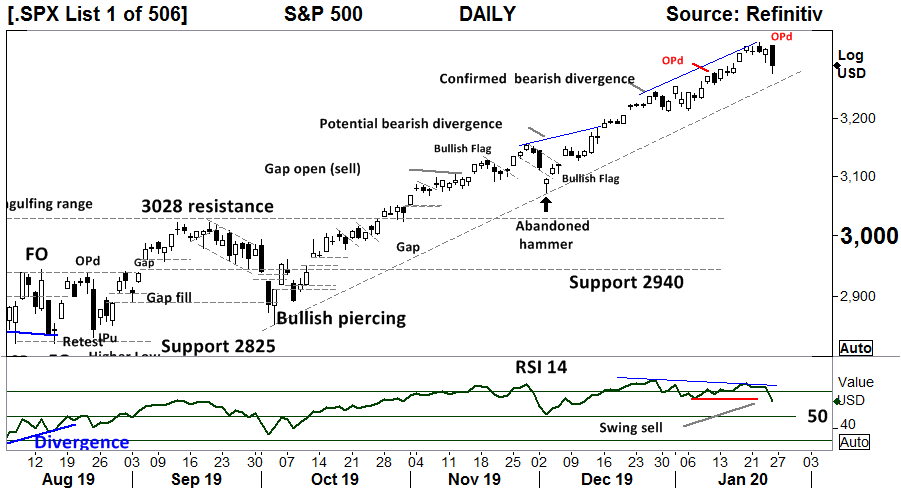 Failure of the “Opd” to reverse price and failure of the Relative strength Swing sell signal.
With the final 2 bars “gapping” open a further exhaustion signal is evident. 3300 will be the psychological support level to hold in an price consolidation.

CONFIRMATION of the long term Bull market, a break of 11150 points has now confirmed the Major indices’.

10870 point level is required to hold as the short term support in the coming week.

The Bull signal remains in place during the technical retracement period.

Relative strength remains over the key 50 level however has turned lower  a sign of decreasing price momentum at this breakout level. 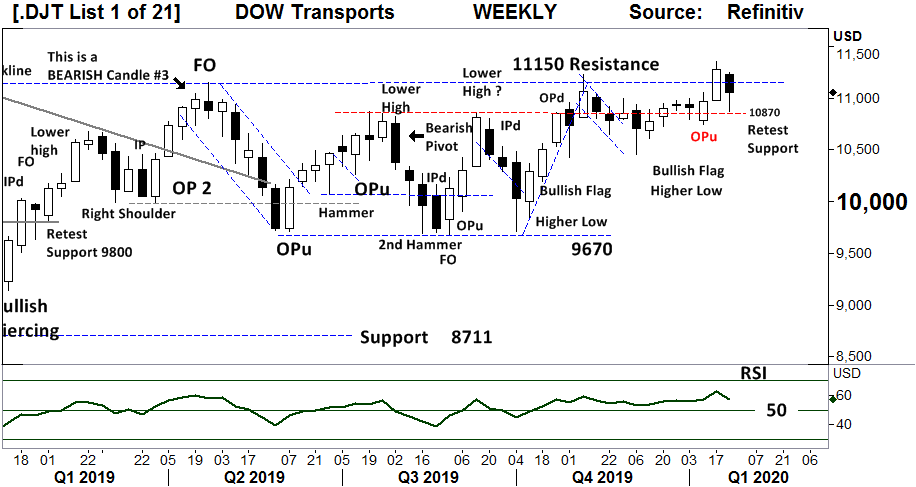 Last weeks strong breakout is a very bullish signal for further gains. In the case od a Daily price retracement 11150 will be an important support level.

Currently the most crowded trade in the market.

With a closing price higher than August September highs is a good sign for continuation to retest the $1610.0 high of the Shooting Star.

Short term traders should be aware of a potential reversal as a bearish flag may be developing.

Relative strength remains over the 50 level, the current 70+ level higher, a sign of increasing momentum. 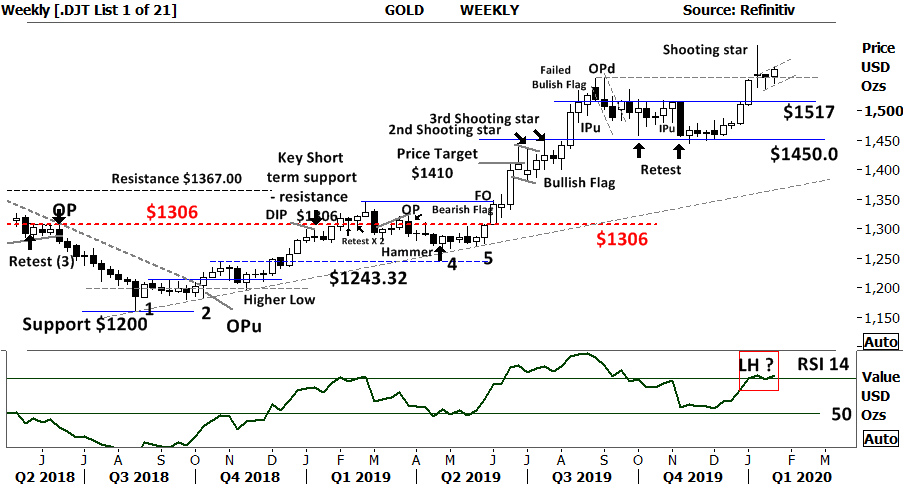 Last weeks relatively short range is a bullish sign of buyer support. Consolidation above the August high is a very good sign for Gold to consolidate before a significant move higher.

GOLD moves to a Daily UP TREND.

The Daily picture of Gold shows the potential Bear Flag pattern developing as the Daily ranges “overlap” each other the market can only be described as a secondary movement in price.

A short term break down would see $1540 retested.

Relative strength has remained over the key 50 level as with the current up turn, price momentum remains strong. 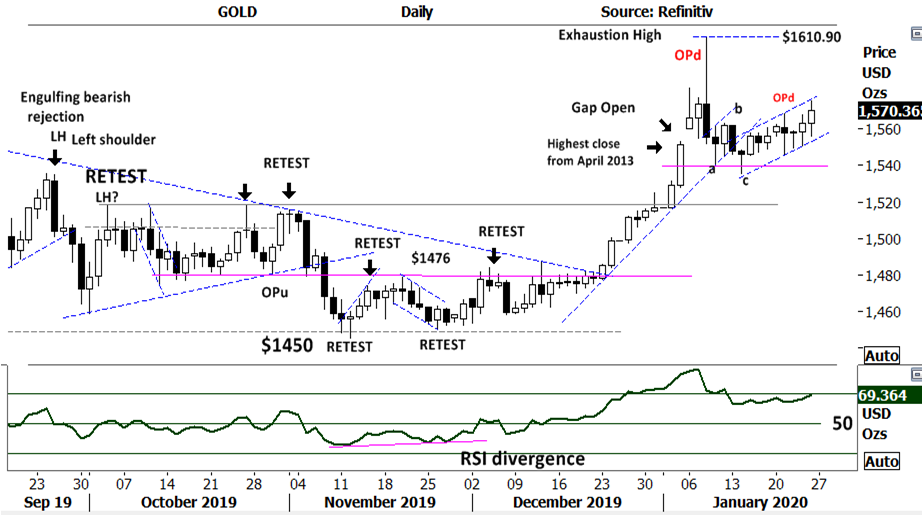 Daily consolidation above $1540 remains a bullish consolidation prior to further gains. The current a,b,c retracement is now complete as has provided an important support level.

A strong support level has developed at $17.76.

The further development of the “horn” type bullish pattern, may be the precursor for a retest of the $18.84 high. 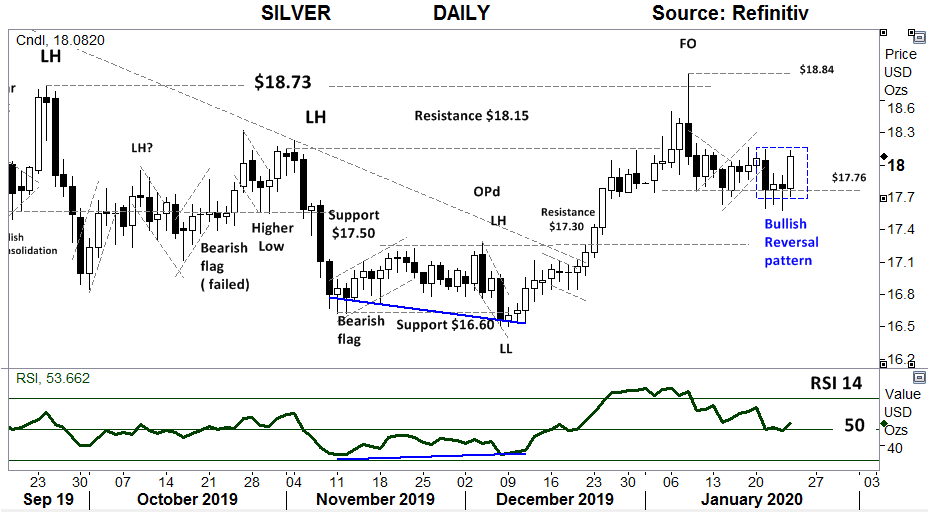 With resistance shown at $18.15 combined with support at $17.50, Silver remains in a bullish consolidation phase.
This shallow retracement should be expected to retest the highs over $18.73.

Current volatility levels, show a significant increase in forward volatility values, this is a Bearish sign the market has increased immediate near term risk to valuations. 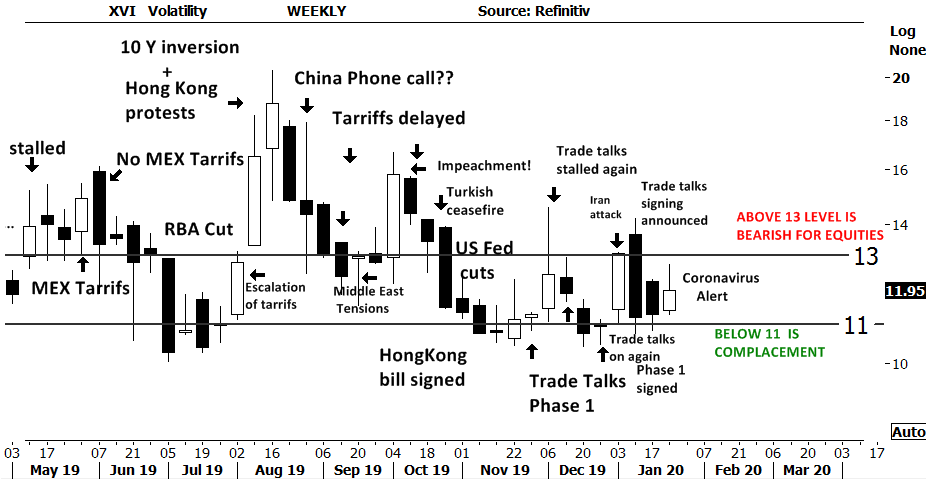 USD Index continues to target 98.45 as momentum remains strong.
This will influence the commodity based equities in the near term.

Relative strength remain positive as a sign of strong momentum.

A breakdown below neckline level around  97.20  would be a bearish signal in the coming weeks. 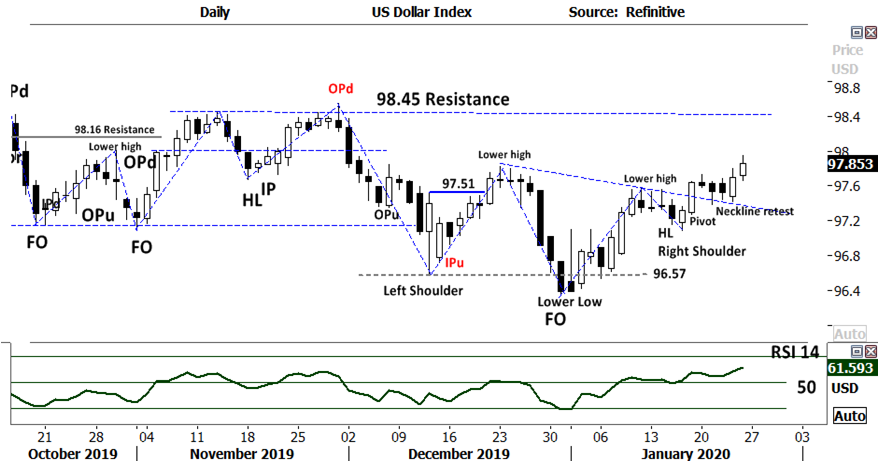 The Weekly chart of WTI shows strong follow through from the OP of 3 weeks ago.

The $50.60 now looks vulnerable for a break down below this level.

The Relative Strength Indicator turns sharply lower from above the 70 level and now below the key 50 level showing a significant loss of upward momentum. 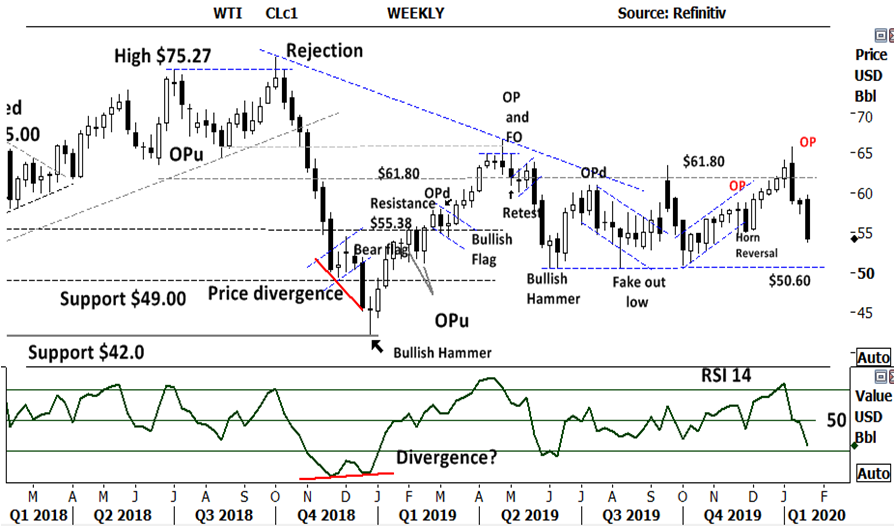 The OP of 2 weeks continues to influence price action within this now 4 Quarter consolidation phase. WTI remains “trendless”, a breakout higher would be a significant move leading to a $75 target.

The technical setups Outside period OPu and OPd

A price range with higher high and lower low than the previous range often indicates a market turning point. Krastins research) The outside period (OP) can mark a significant market turning point at or within 3 bars ( 93%). OPu is an up close bar OPd is a down close bar.

The OP period comes in all shapes and sizes.

should be closed within a week.

If the opening price of the following week is above the

Midpoint selling is still indicated, this often shows a high with 2 weeks warning.

Short positions would be closed with a closing price above

When Line number #9 appears, the body is above the Mid- point. With the closing price lower than the Open.

If this is a short line the trader should wait for the market to show direction. 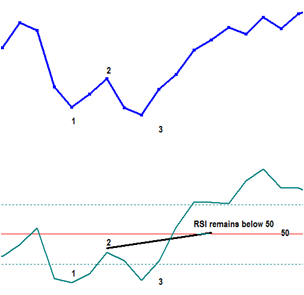 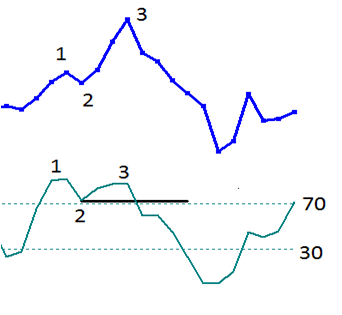 Position size by account size
Building a trading system on simple rules requires a money management process.
As an example, should 1% of the account size be risked on an individual position, the position size can be calculated. Here is the guideline, this allows the trader to build an R- (risk) based return. 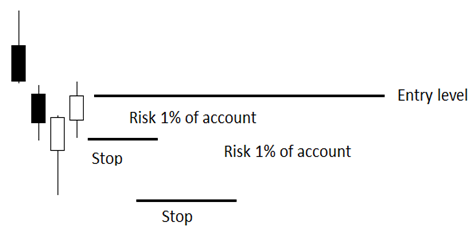 The distance-to-stop is the $ amount risk.
Dividing the distance to stop into 1% of the account size gives the position size.

The lower stop displayed will have a smaller position size.
Profit taken on the trade can then be measured against the risk.

The lower stop loss is 50 cents away. Using the same methodology of a 1% of account risk, the position size is 200 units.