The Australian XJO should remain supported in the early stages of this current commodities expansion. The commercial metals sector has more work to do in sustaining higher prices, however the metals markets look very positive as global shortages of Iron Ore Copper and Nickel play out. With AU real-estate remaining positive Australian banks will remain supported.

With the Biden Administration now in office, markets will be assessing the impact of a flurry of executive orders being signed. The key area for traders is Tax reform, equity markets will be very reactive to any changes – increases in tax along with the increase in the minimum wage to $15/hr.

The US reporting season is now almost complete, with the market showing good support for further growth in the economy.

The 6670 level has again provided support, this will be the level to monitor in the week ahead. The XJO has posted a solid breakout from the short consolidation range, with a closing price in the high 1/3 of the range; this remains a good look for further gains in the coming weeks. The impulsive price bar of 3 weeks ago remains the dominant bar in the immediate range. Using the 6740 level as an indication of closing price support level above or below in the coming week will indicate if the buyers can hold the market higher to retest 7130. 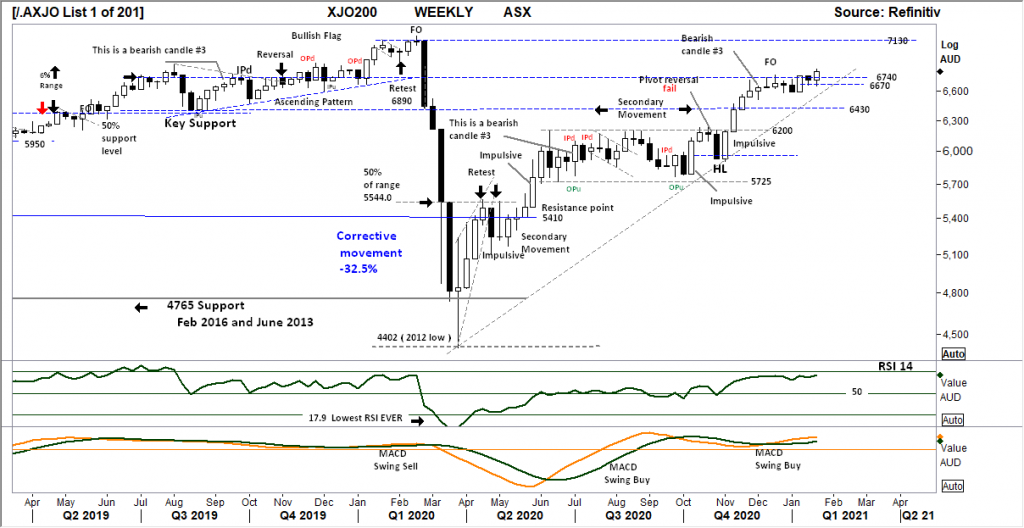 Comments from last week: A week of consolidation, the 6670 point level is identified as the Weekly “midpoint support” point, and holding so-far. A break below this level can give an early warning of weaker prices ahead.

With a clear breakout over the Daily resistance level shown at 6765, a Daily retest of this level would remain consistent with the current progress in price action.

Buyers remain in control of the price action.

Indicator: Relative Strength
3 weeks ago the bearish momentum signal was negated as the RSI put in a 2nd “higher low” prior to the continued move over the key 50 level. Expectation would be for a continued track higher, showing increasing price momentum.

Indicator:  VOLUME
Volumes are traditionally light during this holiday period, so not that much can be read into this underlying indicator. However again the high volume of last Thursday Friday is encouraging for further Bullish price movement.

Comments from last week:  Last Wednesday / Thursday set a new “pivot reversal” and higher low, this can be a very bullish setup. The daily chart better displays the developing consolidation range between resistance of 6765 and support of 6510. A breakout higher is expected based on the rising RSI and current higher low in place.

The outside period (OPd) of 3 weeks ago remains the dominant price bar, last week closing over the high of the OP bar shows the buyers in control. This current move may be considered “extended” however the lower shadow of the OP bar gave the sellers a chance to continue the price lower. This action failed with the closing price at the high.

The Primary trend of the S&P 500 remains UP. 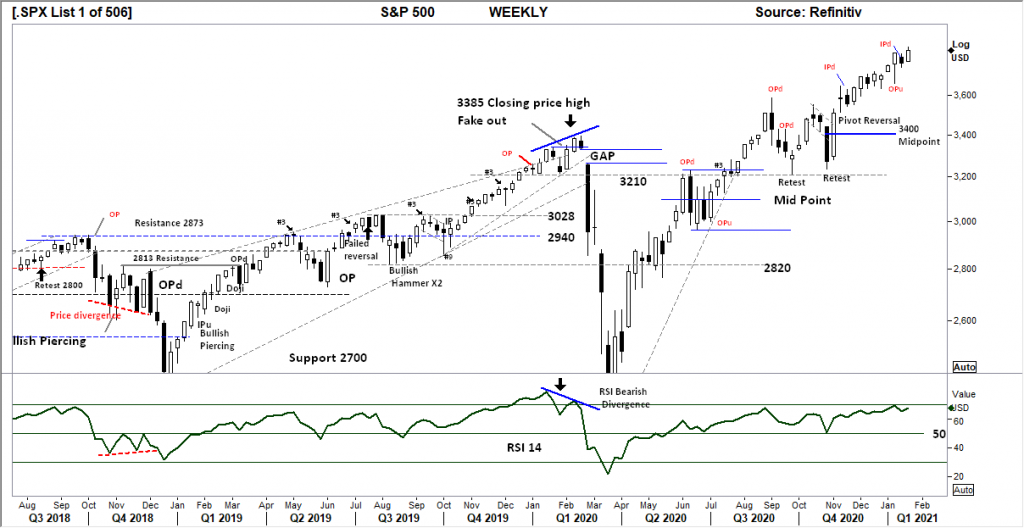 Comments from last week: The “outside period” of 2 weeks ago remains the key bar / range in this Weekly chart. Followed by last weeks “inside period” a short reversal could be anticipated in the coming week.

The underlying Primary trend remains UP, but the current short range IPd shows a loss of momentum and may lead to a short term retracement

S&P 500 DAILY
Price structure:
The price breakout over the 3826 high is significant, Last Fridays retest and reject is more important. The potential is for a Bullish flag to develop at these levels. For the Bears an early sign of price breakdown will be the break below the recent “Pivot Point” and retest apart of a “gap fill” on the way to the current tentative trendline.

The overall price structure remains positive inside the Primary Weekly UP trend.

Indicator: Relative Strength
Relative Strength short term has turned lower from over the 70 level, it is a measure of immediate weaker price momentum and signals and extended move ending. With the underlying price movement higher and the declining Relative strength Indicator, traders should be on guard for weaker price in the coming weeks.

The RSI should be monitored for a movement below the 50 level and further move below key 30 level as a loss of upward momentum to confirm divergence. 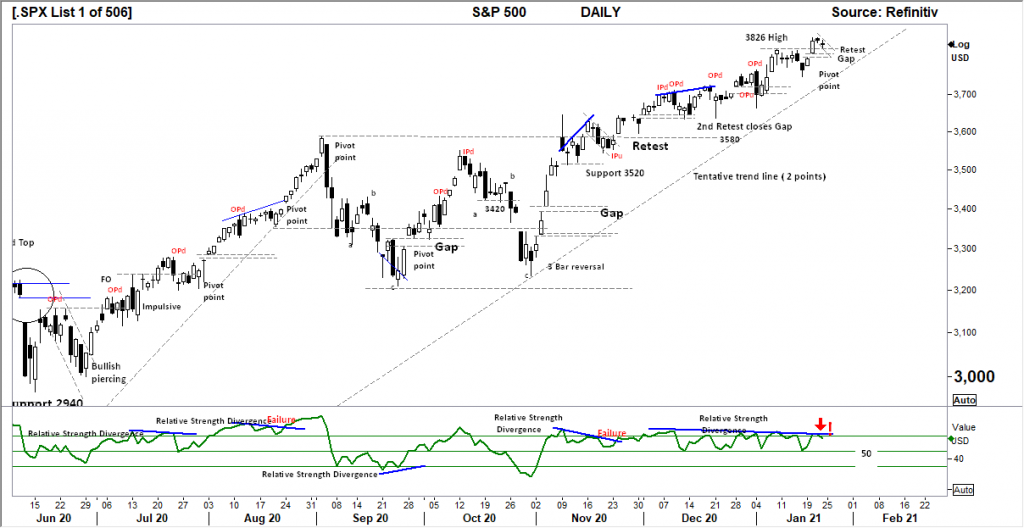 This has the potential to move lower in line with the loss of momentum displayed in the RSI.

A short retest of 3700 would be the first target in any further declines.

Primary Trend remains UP, so any retracement would be a place to “buy the dip” in the short term.

USD Spot GOLD – WEEKLY
Price structure:
Gold remains trapped below $1855 resistance, with last weeks closing price remaining well down from the high of the week.
With the a,b,c corrective move not resolving higher into a continuation of the longer term Primary UP trend, it should be considered Gold may enter into a wave 3 down to retest $1764.0 and the Trend line around $1700.00

It remains critical Gold hold the current levels to potentially set a new “higher Low” and further trade over resistance of $1970.0 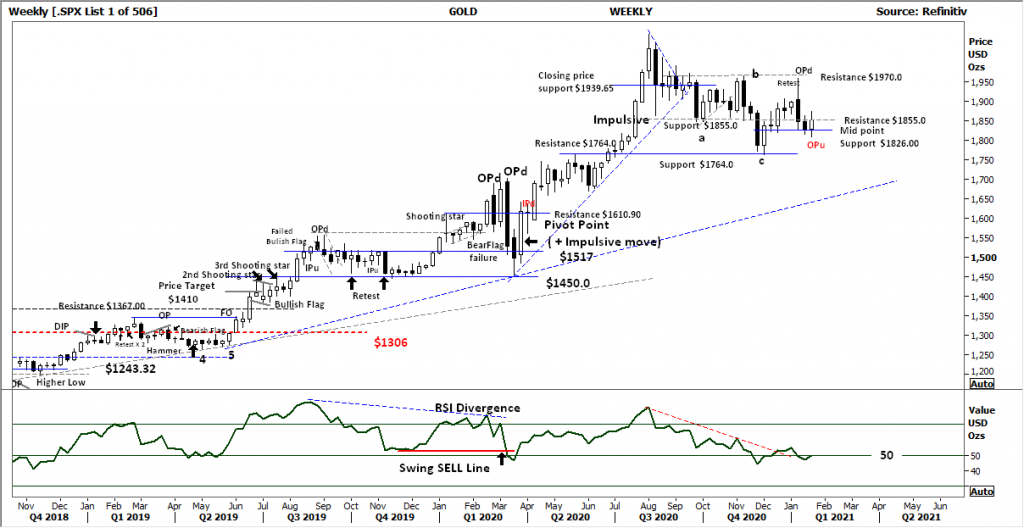 Comments from last week: Gold remains in a Primary down trend, as discussed at the end of 2020. The OPd from 2 weeks ago has command over the chart, midpoint support of $1826.00 is a key level to hold this week, a further breakdown would target $1764.0 support.

A closing price below the “c” low would instigate a new wave count as the beginning of an extended wave 3 down.

AUD GOLD DAILY
Price structure:
The current $2393.0 level remains the key support and resistance level as Gold  in AUD terms remains within a Primary Down trend.

The current “LL” level at $2354.13 is the key support in the event of further declines.

However Last Thursday – Friday bar with lower shadows offer some form of support above $2393.0.

The outcome is continued price weakness in Australian Gold producers. 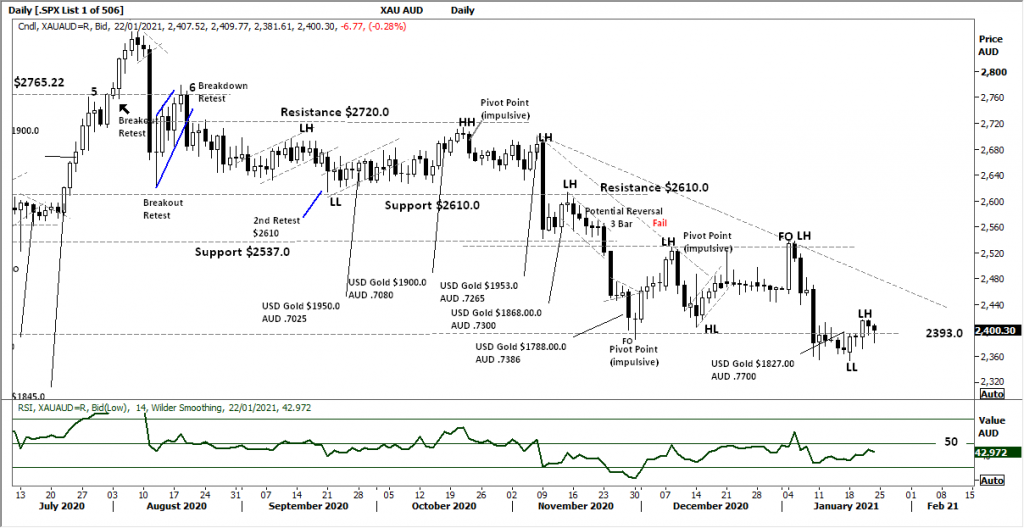 Comments from last week: The key observation in this chart and remaining as a high bearish impact for Australian Gold producers in the continued closing price below $2393.0

It is becoming urgent for the current consolidation below the $26.00 resistance level to be resolved higher, further delay will test the resolve of holders with the potential for Silver to make a sharp fall back into test the $22.50 levels.

Indicator: Relative Strength
Relative Strength has turned sharply lower and now again below the 50 level, operating in line with the underlying price movement and remains a good signal for further loss of momentum. 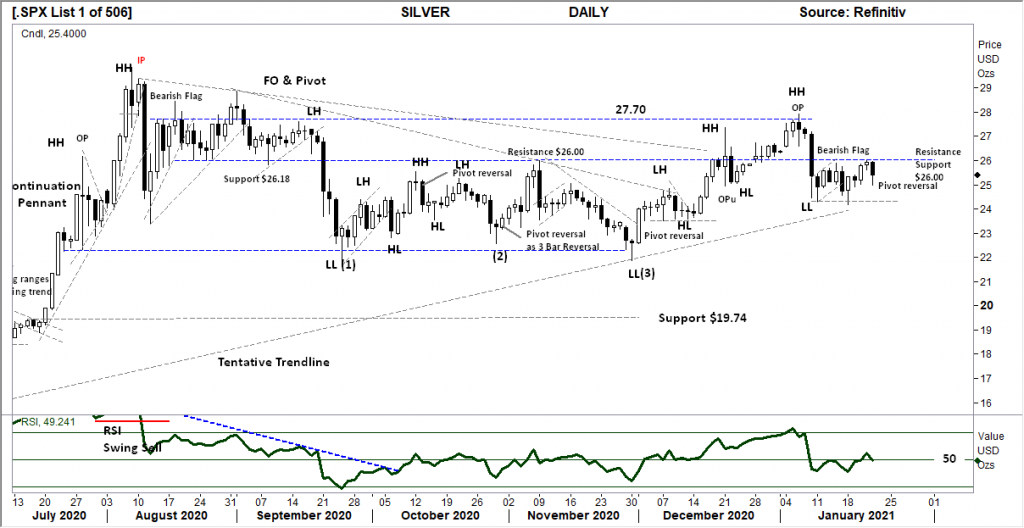 COPPER DAILY
Price structure: Inventories under pressure.
Double inside bars a sign of consolidation within the current extended move. This is the opportunity for the sellers to enter and take profit. But the consolidation remains bullish so-far while above $3.47 / $3.50 support levels.

Consolidation periods can run for many week’s, this will remain bullish for underlying Copper producers.  OZL, SYR, ORE

Indicator: Relative Strength
Relative Strength has remained over the 70 level (just), underlying the strong momentum move underway. An early BEARISH divergence signal has so-far further developed and remains in place, this will still be monitored in the coming week. Further confirmation of a top will be shown if price moves below the $3.48 level and the RSI moves lower below the 70 level. 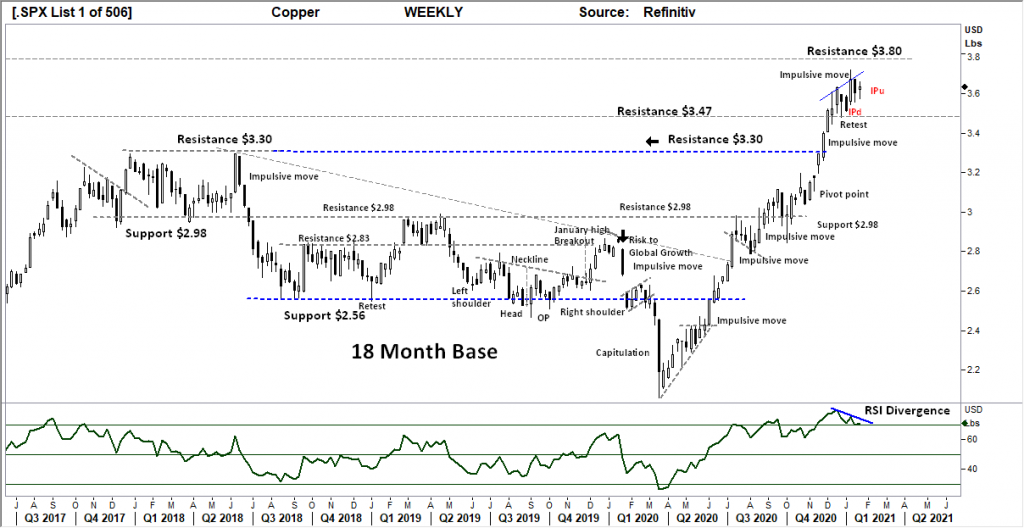 Comments from last week:  The Weekly chart of Copper is losing price momentum and remains at risk of entering a consolidation phase. Support at $3.47/$3.50 will remain a critical level to hold on any price weakness in the coming days.

Best result will be a close below the “13” level as the new year trading volumes increase with a lean to the Bullish side. 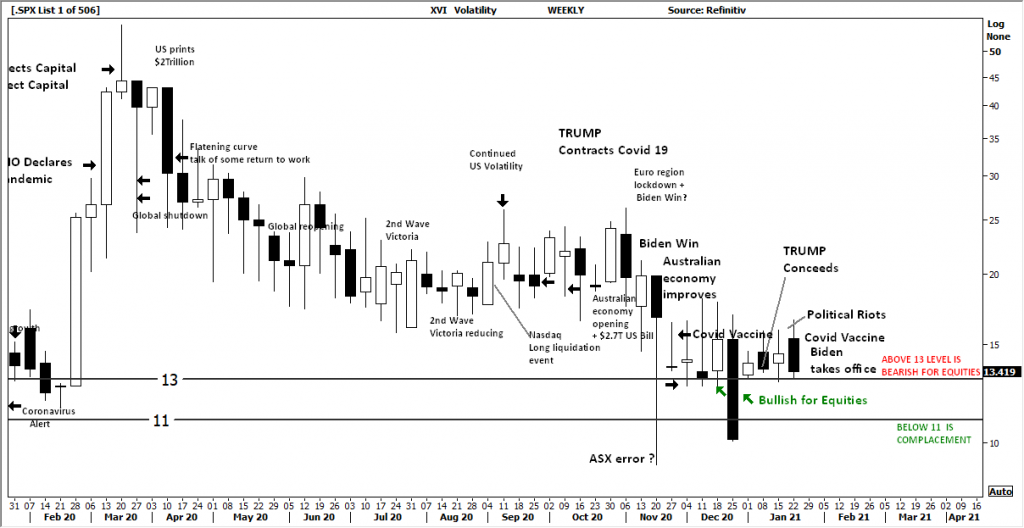 Comments from last week: Global events of political chaos in the US and concerns around the BREXIT negotiations, along with slowing economies and rising jobless rates all point to higher price for “protection” Put options. The XVI remaining above the “13” level is of some concern.

USD DOLLAR INDEX
Price structure:
The USD index continues to “trend” lower. The current price rejection below the 90.66 level may be setting up a “bullish” flag pattern.

This chart remains in the balance for setting up the early stages of a new UP trend ( bullish RSI divergence) or a complete breakdown in line with the current Primary Down trend.

Indicator:  Relative Strength
While the RSI has again moved lower and back over the 50 level, the indicator remains a signal of strengthening price momentum above the key 50 level. Traders would look for an RSI move over the 70 level to suggest a more significant momentum move higher is underway, this remains highly probable. 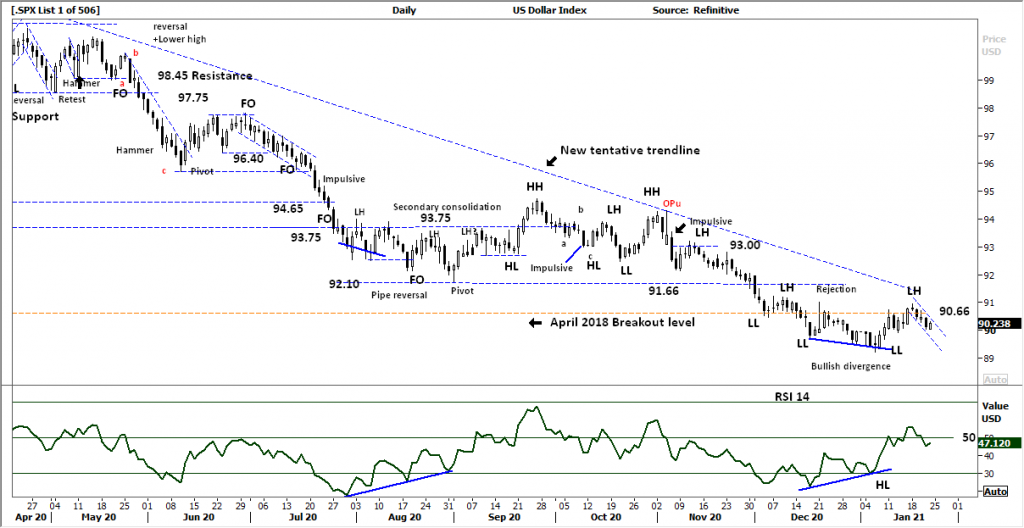 Comments from last week:  The USD index has traded and closed above the key resistance level of 90.66, following the Bullish divergence signal shown in the RSI. (discussed last week)

A further retest of the down trend line would be a positive outcome, a close above the trend line at 91.66 would be very bullish for further gains.

WTI CRUDE OIL
Price structure: This commodity is news driven by supply -demand.
West Texas has remained over the key $50.60 level as the price further consolidates. Last weeks “retest” of the $50.60 level provides short term support, and this level should be monitored for further support in the coming week.

Indicator: Relative Strength
RSI turning higher over the 50 level and now over 70 remains in a very good place for further momentum price gains.
As the indicator is now over 70, this will still be monitored for a potential divergence signal. 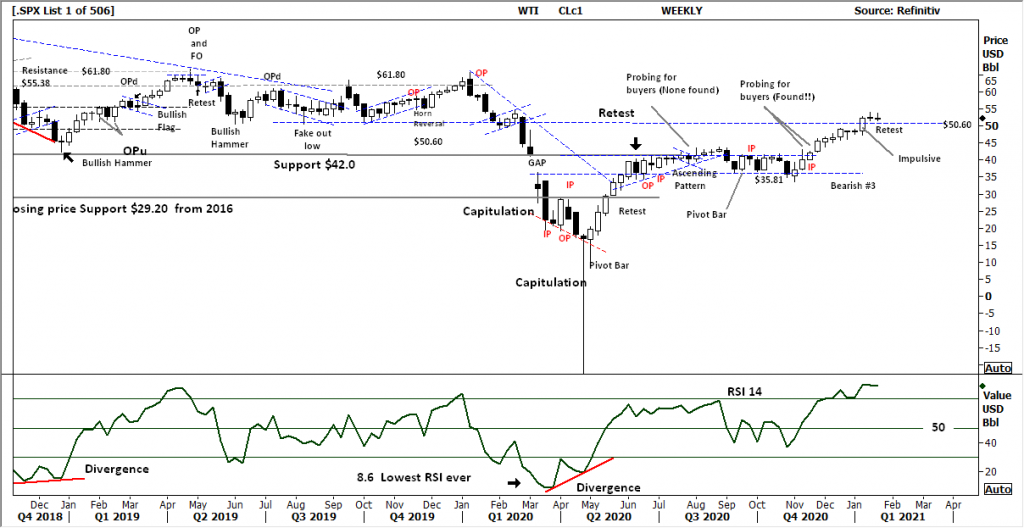 Comments from last week: Following the impulsive price move 2 weeks ago, the Support / Resistance level of $50.60 is now the key level to hold in the coming week.