The past week has again been extremely volatile for traders and investors. A common observation during market declines are sharp recovery days often followed by new low being shown.

This type of market is at times being driven by fundamental announcements of support only to be followed by continued and relentless selling.

I commented 2 weeks ago about the unwind in ETF products during a market decline where good strong stocks are being sold down along with equities with poor balance sheets.

This selling can lead onto declines in underlying commodities, the current example is the decline in Gold and Silver values. While a more price stable commodity at the moment is Iron Ore.

WTI crude has traded back to prices not seen since 2001.

The Weekly XJO shows the continuing and directional selling pressure to close towards the low for the week.

This current 4765 level goes back to February 2016 and June 2013, a further Weekly close below this level would only
show a continuing momentum move underway. A close above this level would set the next support level 4328 as the further and immediate downside target. 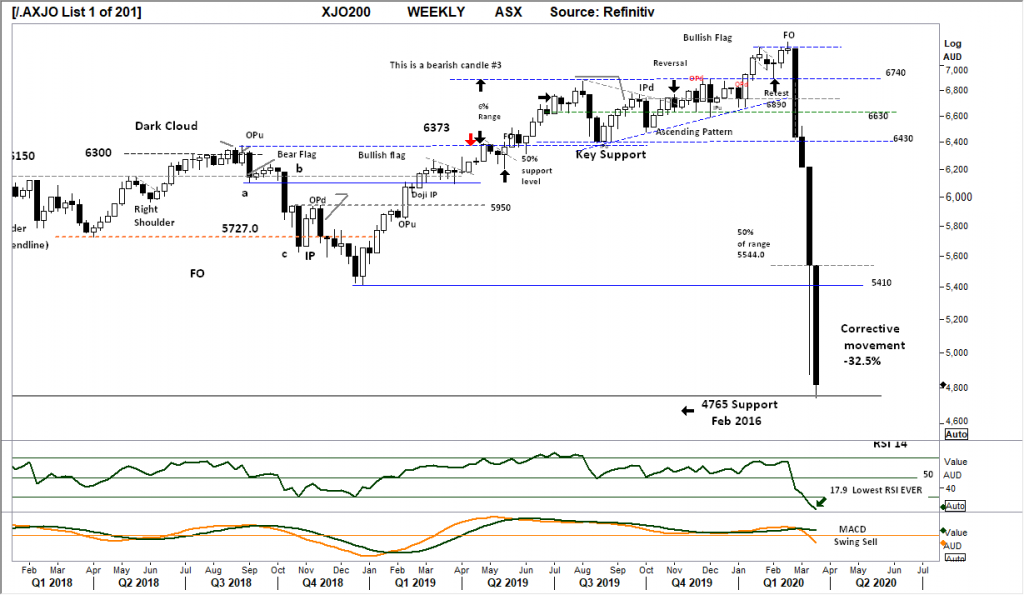 Comments from last week:
The Weekly XJO shows complete disregard for the long term trend line as lower support levels are tested in this CORRECTIVE price movement. This corrective movement does not change the underlying UP Primary trend. Currently the Weekly bar shows the close at the 50% “mid-point” of the range.

5410 has become the underlying closing price support level to hold in the coming week.

XJO DAILY
Large volume days as the market moves between short term resistance and support, with the mixture of positive and negative days the market is in accumulation mode at these levels.
Further capitulation below 4800 would suggest a further sell down towards the weekly support of 4328.
Relative strength continues to show bullish divergence, however remains below the “30” level, this divergence may be regarded as “weak”. 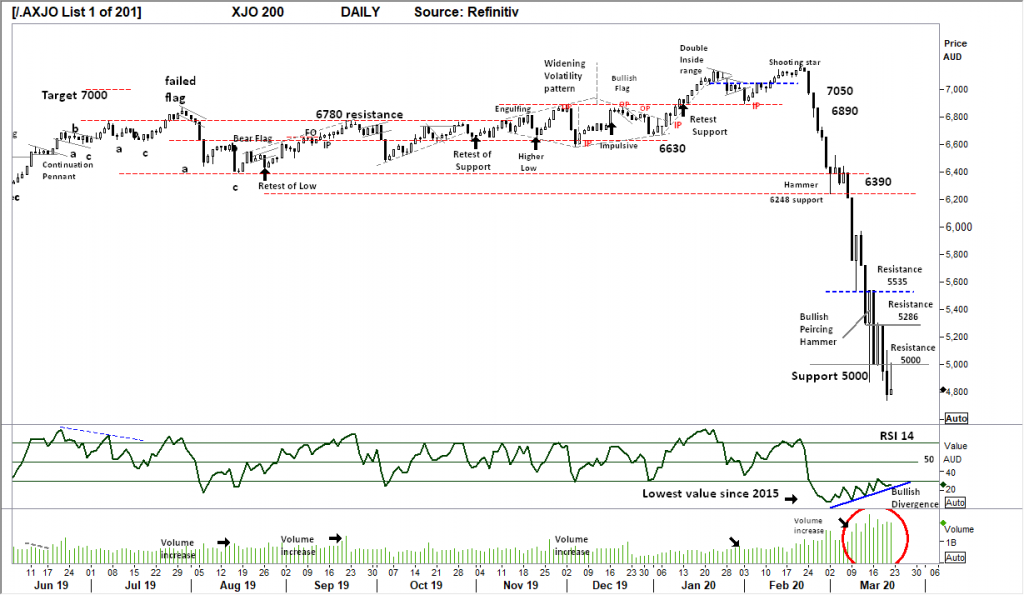 Comments from last week: With the breakdown below 6245 seemingly complete, the final bar shows as a piercing “hammer” bar. Further price gains would be monitored for a retest of the 6245 level. Current support would be broken with a daily close below 5300 being Thursday’s low.

S&P 500  WEEKLY
The S&P weekly chart remains directional with a close towards the low of the weekly range. The current 2280 January 2017 support remains the level to hold.
Relative strength has moved below the “30” level.
Market may “react” to outside Government announcements and stimulus, however downside momentum remains strong.
Should a relief rally occur the first resistance level is now 2400 points, this level should be monitored for a weekly closing price above this level to indicate a sign of support. 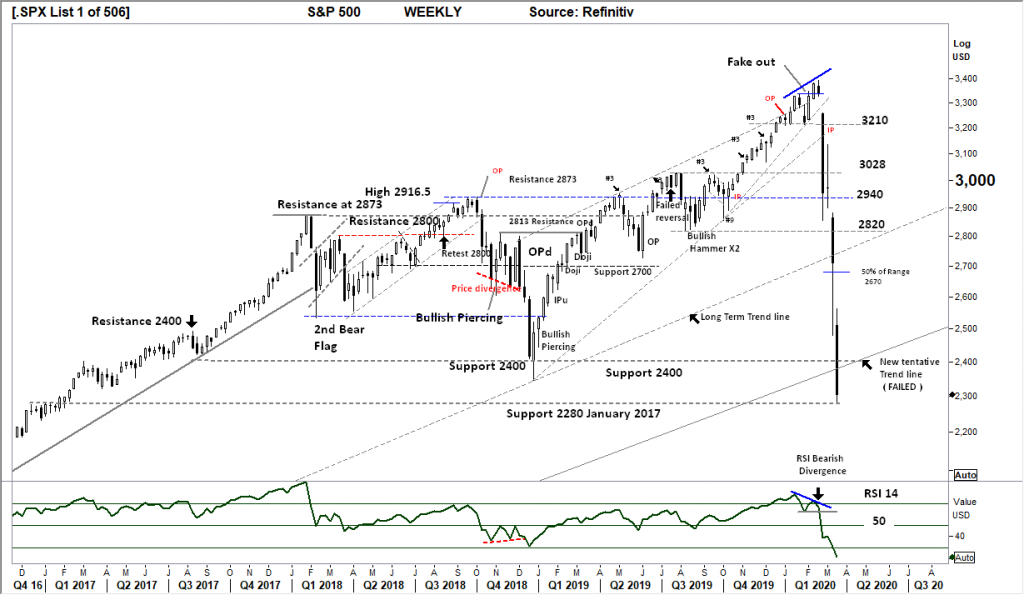 Comments from last week: Following Mondays GAP open and capitulation move lower the close on Friday has gained back more than 50% of the range, a bullish signal. Further gains could test 2820 as resistance. The 50% midpoint is calculated at 2680 and should be monitored in the coming week as “weekly” support.

S&P 500 DAILY
Fridays low close to retest the 2278 lows of Wednesday. This level is below the December 2018 low. With an intimate support level at 2278 observed, a potential further breakdown could show a further capitulation move to 2085 points.
The Daily chart is now developing several levels of resistance that can be used as a gauge of any bullish price moves that may develop the coming days.

Relative strength remains below the key 50 level and now continues to show BULLISH DIVERGENCE a strong sign of changing momentum from down to UP.
A further movement below the 30 level would negate this current observation. 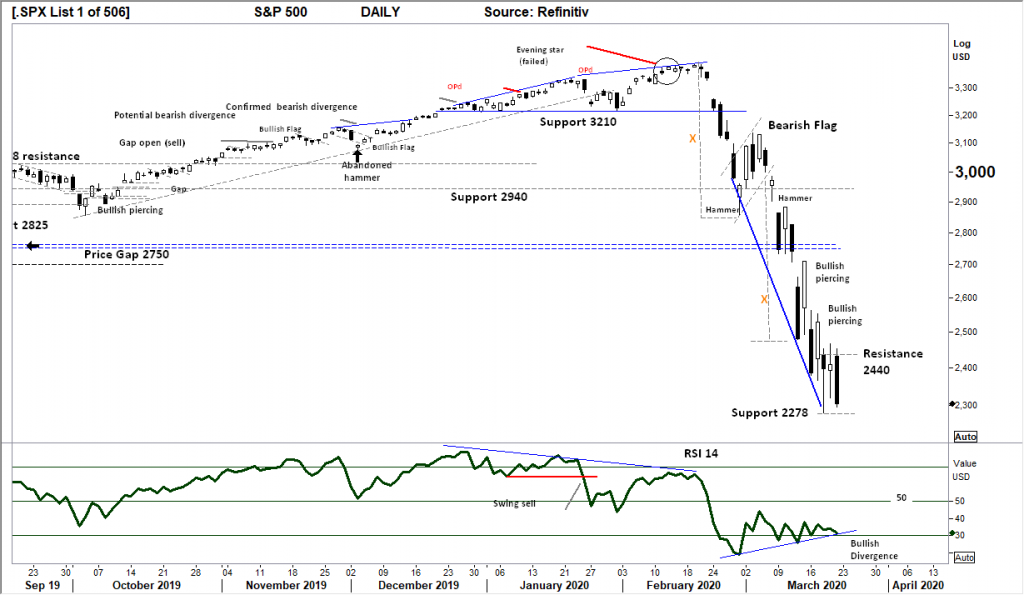 Comments from last week: A closing break down of the low at 2478 would be a very bearish signal for further price declines.

GOLD – WEEKLY
Last week’s notes observed the potential for GOLD to move towards historic support of $1450 ( see notes below ).

ETF selling the physical to raise cash has led to a lower market in this metal.
$1450 is now a critical level to hold in the coming week.
With the mid-range close towards $1517 resistance this will be the level to watch for a bullish breakout.

Relative strength has shown a swing sell signal as the indicator moves below the internal low.  A further sign of overall momentum slowing would be the indicator remaining below the “50” level.

Comments from last week: The significant observation on this chart is the new high ($1691.72) set, overcoming the OPd (outside period down close) a very bullish signal as price momentum remains strong. The OPd remains in place as a statistically relevant marker of a “high within 3 periods”, within this primary UP trend. 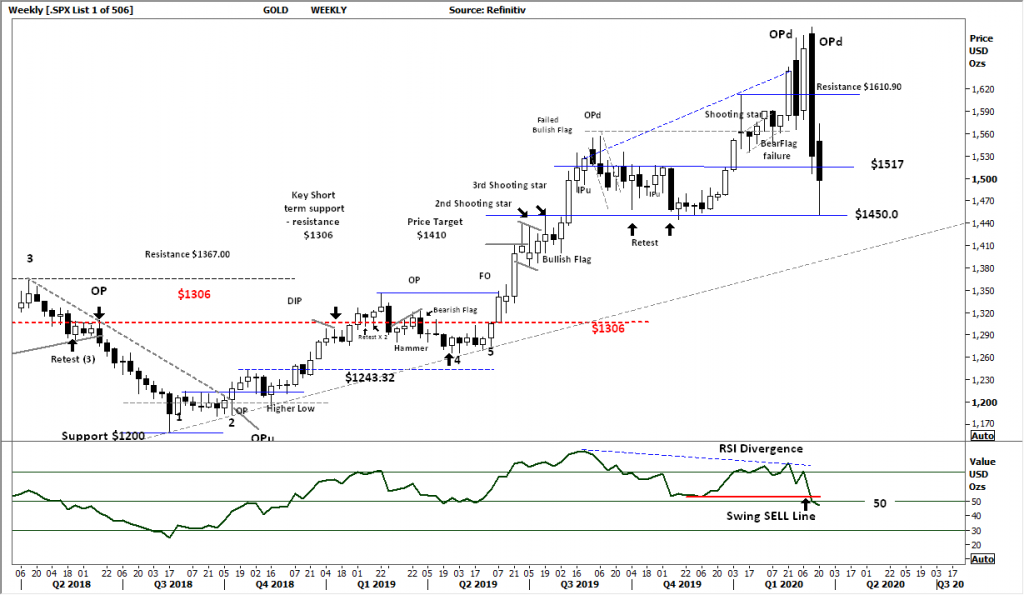 Comments from last week: There are significant statistics of +90% that indicate the OPd can mark a “high” within 1-3 bars. The retest of $1517 may usher in some consolidation above this important support level. A further weekly close below this level would look for support at $1450.

GOLD DAILY
Trade the price not the safe haven.
Current daily price movements indicate a consolidation level above $1450.
Friday’s OPu ( outside period up close) has good statistical value for marking turning points in underlying price movements.
If it is considered Fridays “up close” is short covering the $1460 low of Friday will be the marker for a further bearish move.

Relative strength has moved below the key “50” level following the Bearish divergence signal showing from late February – early March.
Currently the upturn is the RSI as it remains above the “30” level is a good sign for changing price momentum 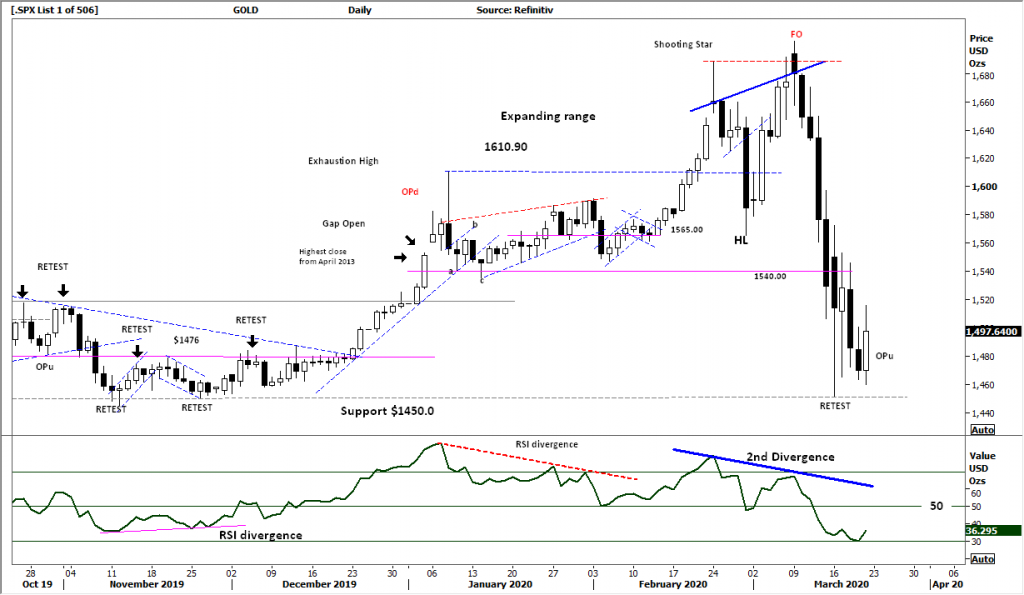 Comments from last week: The “Fake out” mentioned last week has followed on to move price sharply lower on expanding ranges. Buyer confidence will be shaken, any support should be consolidation not a further move higher. The daily close below $1540 is a short term bearish signal in this “corrective”

SILVER DAILY
Current consolidation above $11.50 set up silver to make the first “swing point” to higher prices.
This type of consolidation can break lower, Wednesdays low of $11.61 will be the first level of intimate support in the coming days.

Relative strength has turned higher, however remains below the 30 level.

In the coming days should RSI move over 30 on a rising price this would be a very strong indicator the “low” is in for now. 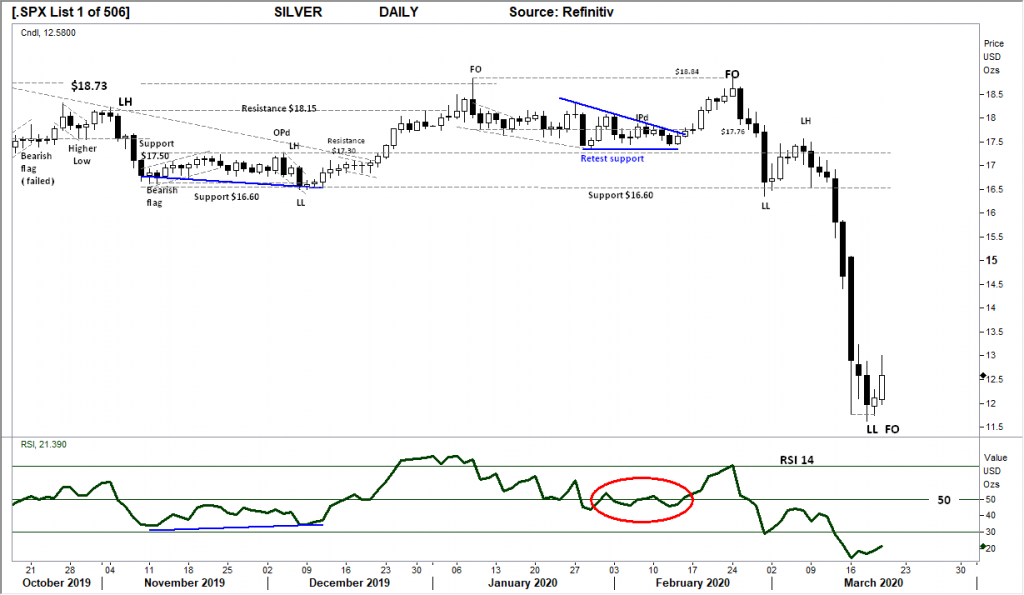 Comments from last week: Silver failing to make a new high with Gold became the warning as Silver puts in a lower high and breaks $16.50 support to test the $14.85 historical support. This level is the Bear flag price extension. Consolidation would be expected following this sharp decline, traders would look for a further bearish flag pattern to show further declines. Bullish consolidation should remain above $14.85 in the coming days. Failure of the level may test the next level of support at $14.30.

AUSTRALIAN VOLATILITY INDEX
Current volatility levels, the 2nd highest since the GFC and again shows a further increase in forward volatility values, this is a Bearish sign the market has increased immediate near term risk to valuations. This may again move higher in the coming weeks.

As markets anticipate events, the forward priced option volatility changes,  hence as forward price changes, this “skew” in pricing is measured in this XVI.

An XVI over “13” is generally bearish for equities 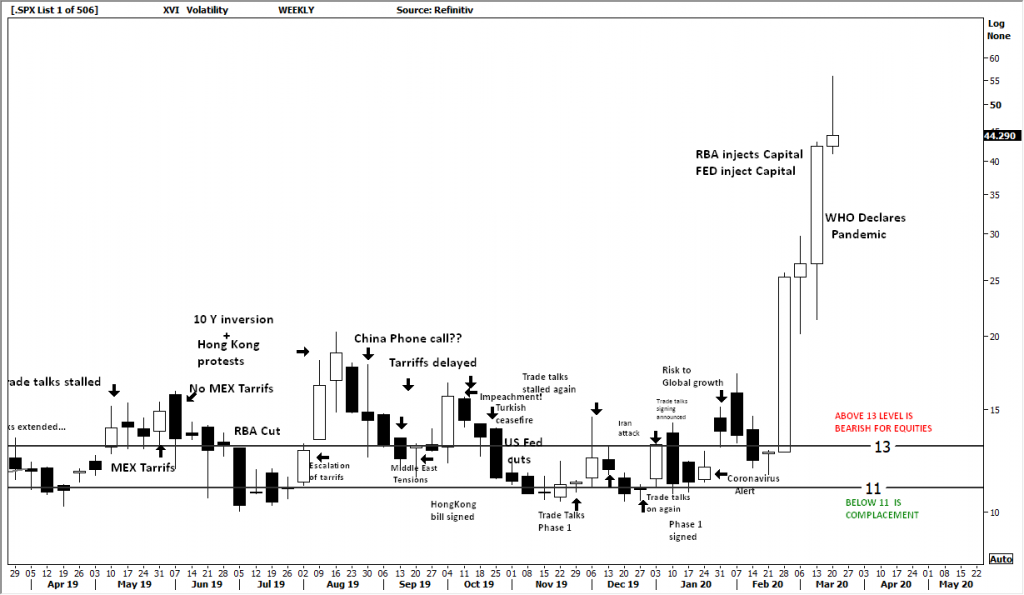 USD DOLLAR INDEX
As the US federal reserve pumps money into the credit systems the USD has gained last week to remain over the 102 level.
The long lower shadow of last week’s price movement shows the overall strength of the USD.

Relative strength has moved above the “70” level indicating improving and bullish price momentum. 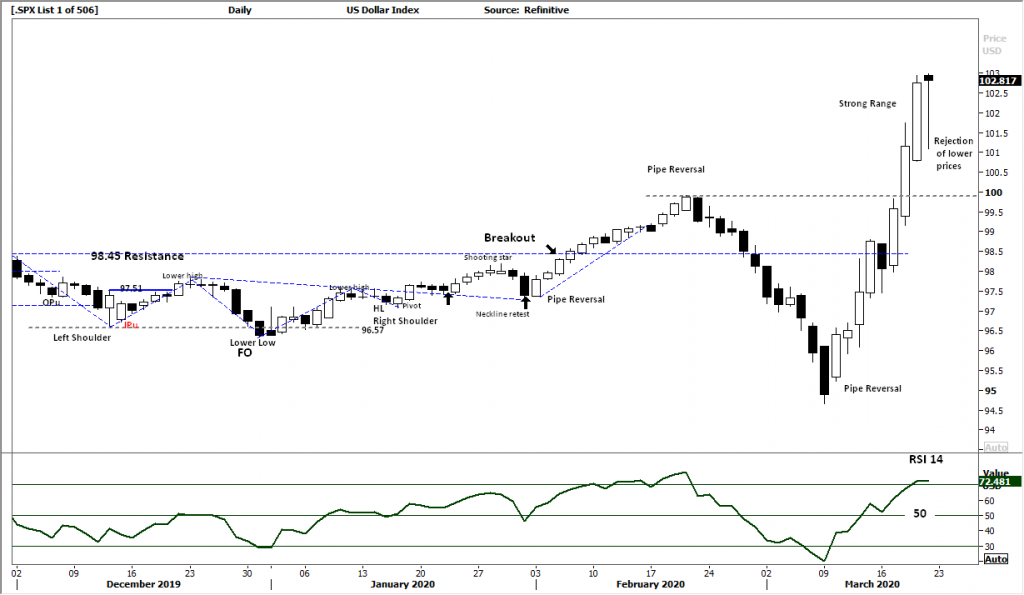 Comments from last week: Potential resistance at 98.45 has failed to halt the price movement with expanding daily ranges. Current momentum has the potential to retest the “100” level in the coming days.

The large range of the weekly price candle suggests consolidation may develop  above this current low.

RSI is deeply oversold, and can be observed as “turning” sideways, a good sign a low may be close.
This commodity is news driven, so any gains in the coming week will put traders at risk of a “retest” of last week’s low in any coming price consolidation period. 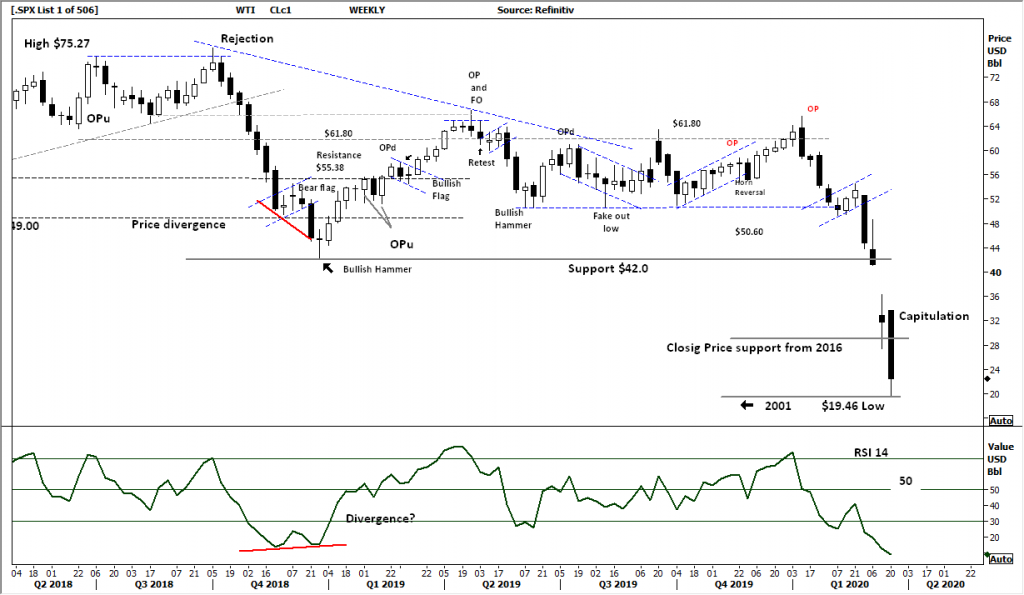 Comments from last week: A news driven opening GAP setting a capitulation move to test support from 2016 at $29.20. This earlier support level the key level in the coming days, a closing breakdown below this level would signal a further bearish move lower, potentially $20.