Major indices continue to trade towards recent highs, as retracement remains shallow. Defying the logic of extremely high unemployment and reduced company earnings. The Nasdaq driven by the leaders Amazon, Apple, Google and Facebook, also contains many other tech stocks being driven higher by the new working from home paradigm.

Gold and Silver post significant breakouts higher, as the safety hedge continues, although Silver, an industrial metal, has gained on the potential restart of the economies around the world.

Last week’s small high / low range and failed retest of 5544.0, coupled with the small range between open and close saw the 5410 level become the critical reference level for this week. Only a significant movement over 5544.0 would bring in the FOMO buyers. The risk remains of price weakness in the coming week. 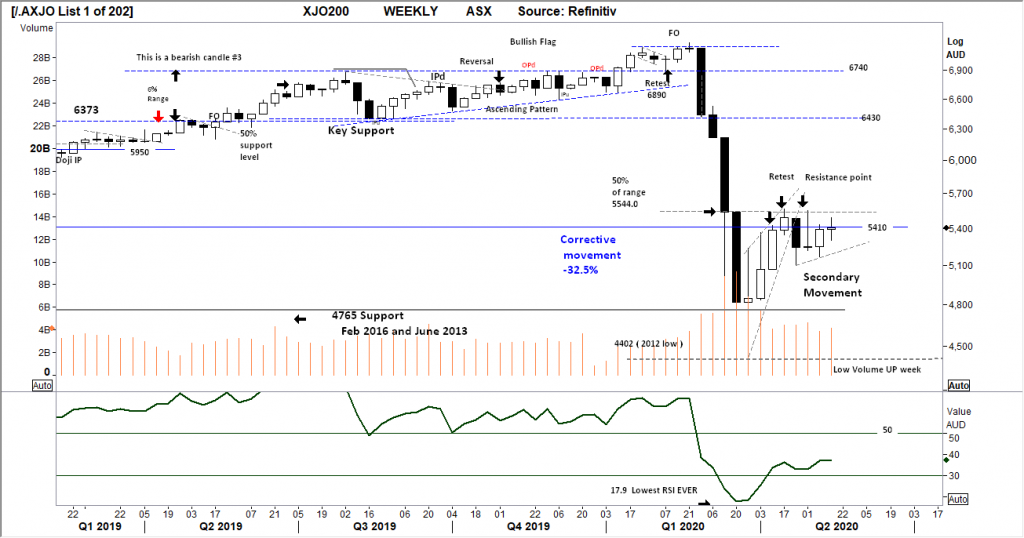 Comments from last week
: With consistent rejection at the 5544 level, last week’s range has failed to re-test this important level. The weekly bar completed on “low” volume although closing on the high, immediate follow through is required to remain bullish. A closing high towards 5544 or higher would be a very bullish signal for further gains.

The daily chart of the XJO Index remains within a developing price channel. The current consolidation of last week in the form of a bullish flag has the potential to breakout higher, but requires a large range day or days to convince the Bears to give up. Weakness would target 5000. Price strength could be seen with a breakout over the Daily resistance level of 5535 points.

Indicator:  Relative Strength
RSI has moved above the key 50 level again in a sharp mid week up turn. Any loss of upward momentum would see a return to sub 50 levels and warn the trader of impending further weakness.

Indicator:  VOLUME
The recent daily volumes can be seen rising on down days with Volumes falling on UP days. This is typical Bear market activity as the overall volume dries up as the market reaches resistance. Fridays positive close on relative high volume, is unusual and should be treated with suspicion as Friday closed off the high of the day. 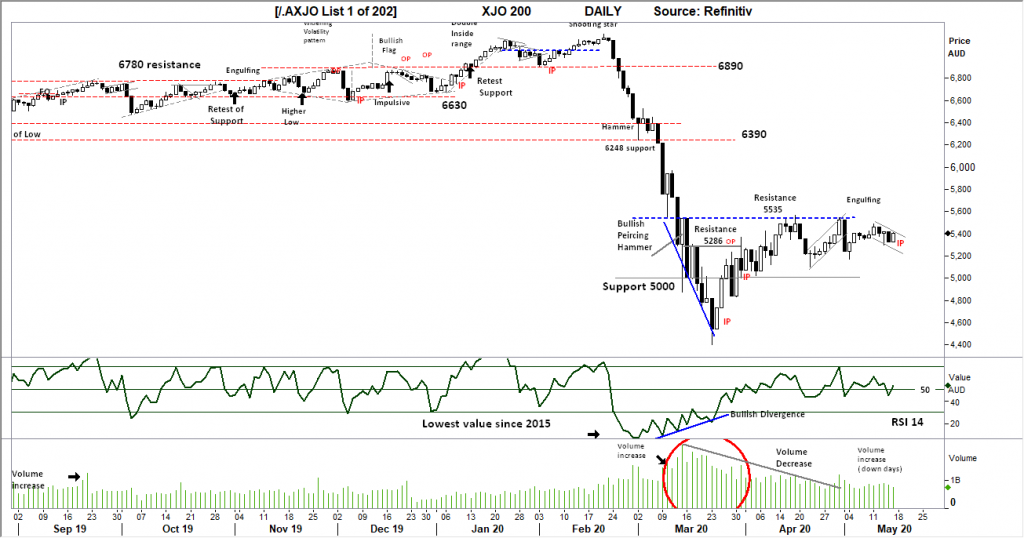 Comments from last week: Small range days remain uninspiring for a potential breakout, the risk for a retest of 5100 is growing with each day that fails below the Daily resistance level of 5535.

The Weekly bar classified as #9 from the “Haguro” Candle method (see note) suggests an end of the upward movement, the current resistance of 2873 remains in place. A break (down) below 2820 would be a very bearish signal for further weakness. This current price structure remains a secondary movement within a bear market. 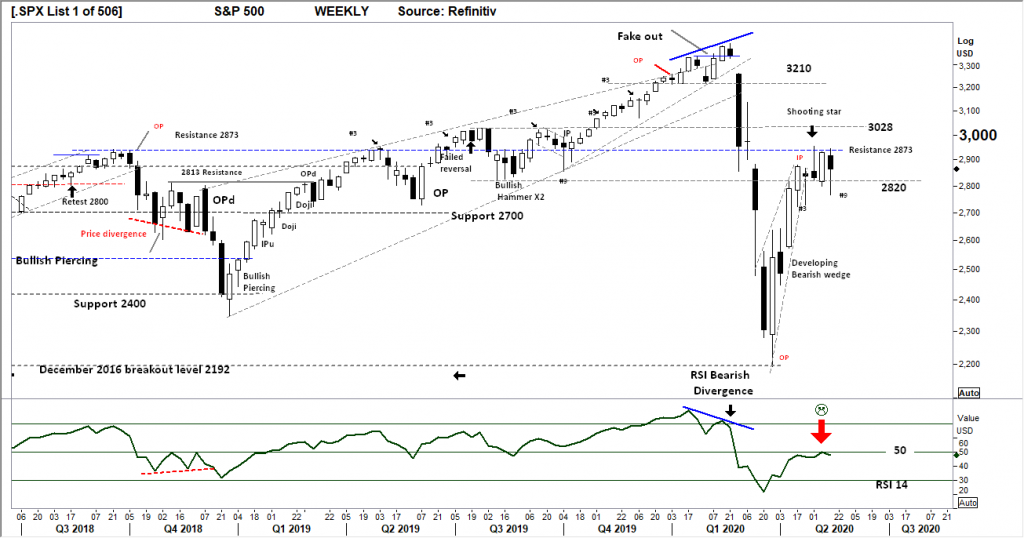 Comments from last week: The developing bearish wedge is at risk of failure as the week closes in on the high of the rejection shooting star. Resistance at 2873 will remain the key level this week. A continued expansionary move higher places the Index at risk of a blow off top should the “fake out” high be exceeded.

S&P 500 DAILY
Price structure:
Last Thursday’s Bullish piercing range was met with a gap down low opening on Friday, while that remains a short term buy signal the overall development of the two bearish flags remains a weak price structure.

Indicator: Relative Strength
RSI from last weeks bearish divergence intermittently turned higher, the signal line has rolled lower as bullish momentum has been lost. Without a breakout over 2940 points look for a further bearish movement below 50 in the coming week. 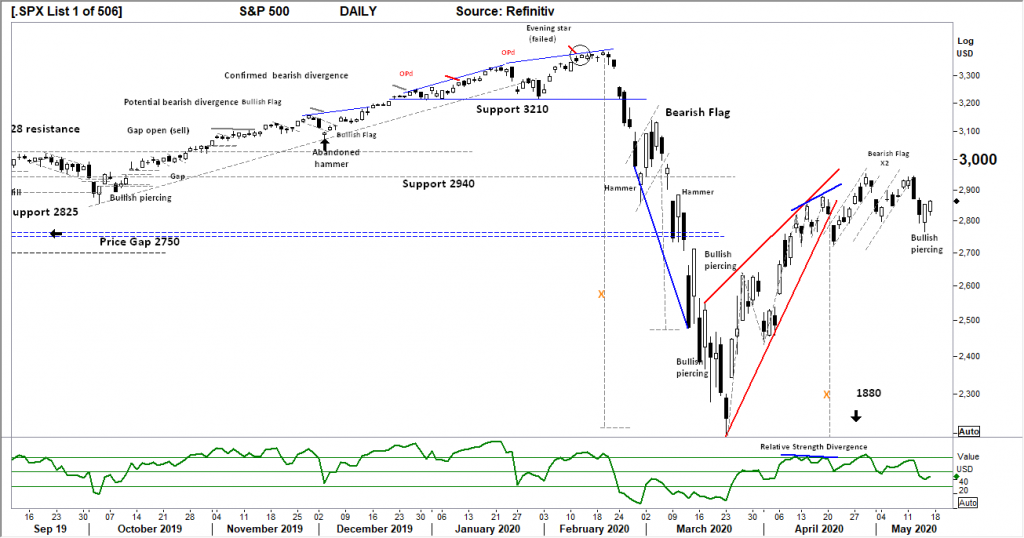 Comments from last week:  The Daily S&P now contains two bearish flag patterns, Friday’s “gap open” is a short term bearish signal that should show up early this week. Daily trend is UP (weekly undefined) however a potential breakdown below 2800 would be a bearish signal.

Last week a text book breakout, with a new closing price high, a very bullish move is currently underway. USD Gold remains a considerable distance from the long term trend line, this two inferences, 1. The primary trend is accelerating, with the risk of an exhaustion top, 2. A price breakdown below $1610.90 may see a retest of the long term trendline.

Indicator:  Relative Strength
The Relative Strength Indicator has failed to make a new high in line with the underlying price making a new high, an early sign of potential consolidation. However, the indicator remains over the key 50 level a sign of positive price momentum. 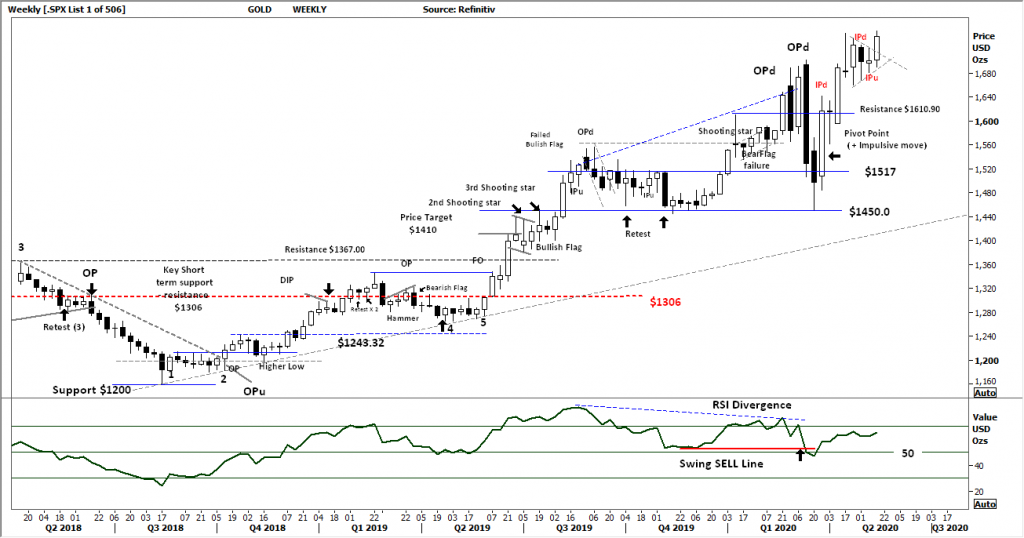 Comments from last week: This Weekly “pennant” pattern is a strong signal for continuation within the primary UP trend. The two inside periods show an indecision pattern. Should price breakdown the $1610.90 would be the potential retest level.

AUD GOLD DAILY
Price structure:
In line with the USD gold price moving higher and a weakening $AUD the current bullish flag breakout has the potential to set new highs over $2765.0. This daily view has now entered a new up trend, Friday’s expanding range a sign of strong momentum.
Immediate continuation is required to remain short term bullish, along with a weakening or stable $AUD.

Indicator:  Relative Strength
A sign of overall positive momentum when the RSI remains above the 50 level. The RSI is now indicating strong price momentum, a move higher would only be reflective of the underlying continuing higher. 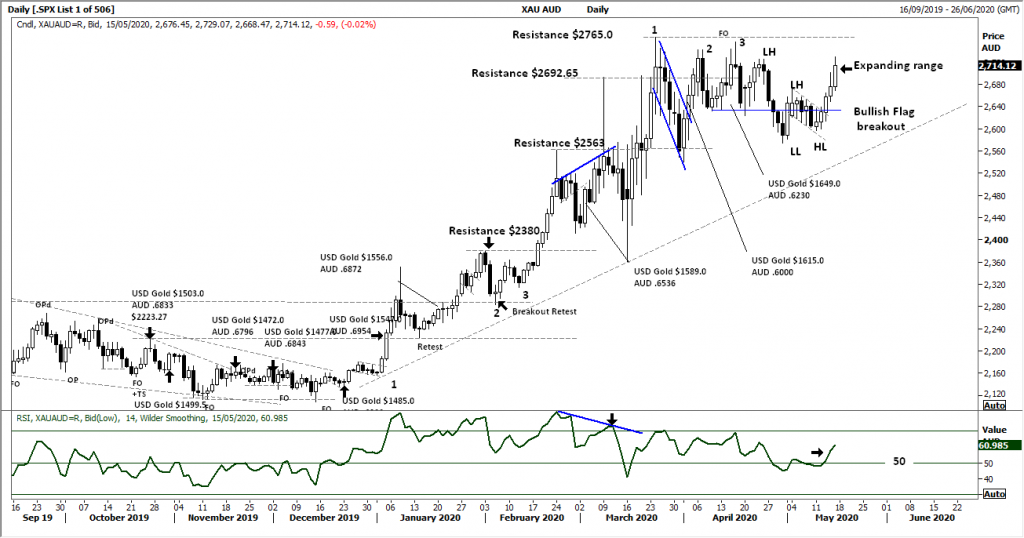 Comments from last week: The Daily chart of AUDXAU shows the 3-spike high in place followed by a solid move below $2650. The current decline is a measured Bullish flag pattern, however further weakness may see the long-term trend line tested.

Should USD Gold move lower this broad top will be viewed as a distribution pattern. 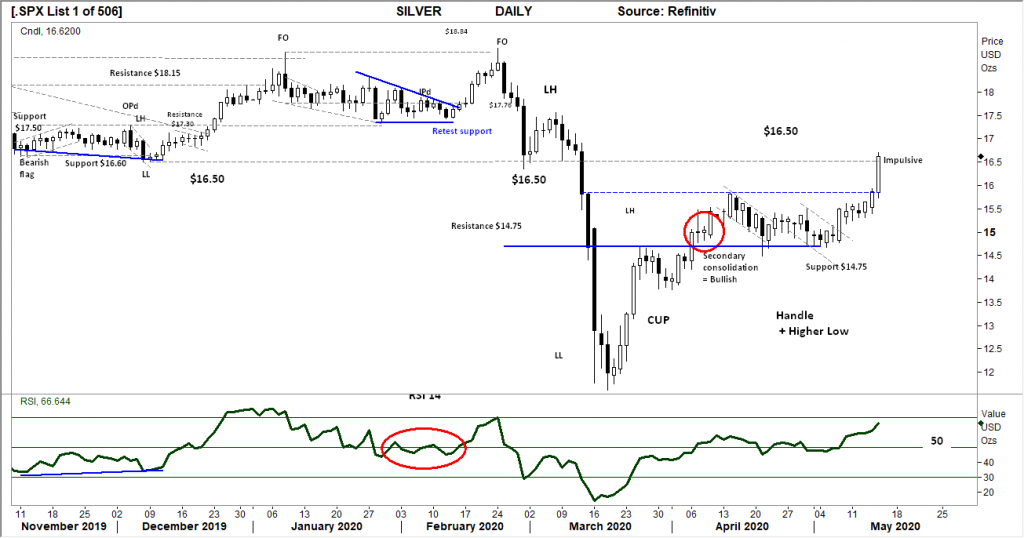 Comments from last week: The daily chart of silver shows the Bullish move last Thursday, this was not followed thru on Friday and may result in further consolidation above the developing $14.75 support level. Traders would look for a further closing high above $16.00 as confirmation of underlying buyer demand.

2 weeks ago the level began to rise in line with loss of Bullish sentiment in the equities market.

And although the reading is lower this week, the most important observation is the value has maintained a relatively high reading currently at 25, reminding the trader this indicator has the potential to move higher in the next week. 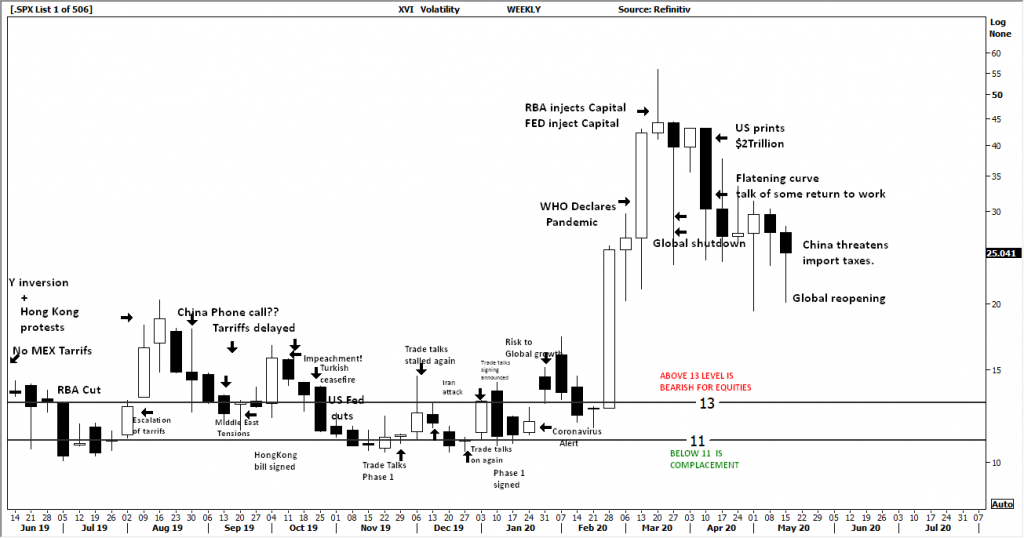 USD DOLLAR INDEX
Price structure:
DXY remains range bound, although the approach to the higher level 101 is looking imminent.
Monday’s low opening by the sellers is a concern and not a bullish development.

Indicator:  Relative Strength
Relative Strength had remained just above the 50 level, however the sideways movement is a continuing sign of weak momentum as the indicator turns flat to lower. 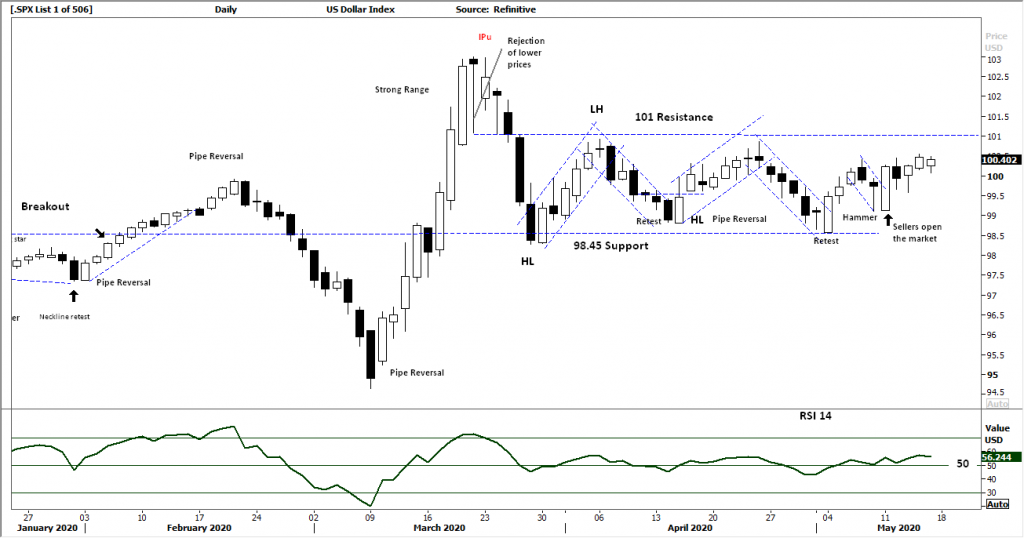 Comments from last week:  Simple channel development underway, the “hammer” bar from last Friday remains a bullish signal for a retest of the 101-resistance level in the coming days. No defined trend is in place as this range consolidation takes place.

WTI CRUDE OIL
Price structure: This commodity is news driven.
Last weak saw Crude make a nice follow through and break above the key $29.00 level on a strong close for the week.

Further price gains into the February Gap are possible. Traders would look for a successful retest of the $29.0 level on any price weakness in the coming days.
Resistance remains at $42.00

Indicator: Relative Strength
The developing picture in the RSI is a Bullish divergence Buy signal, a weekly cross of the 30 level has now confirmed. This should be monitored for further progress over the key 50 level. 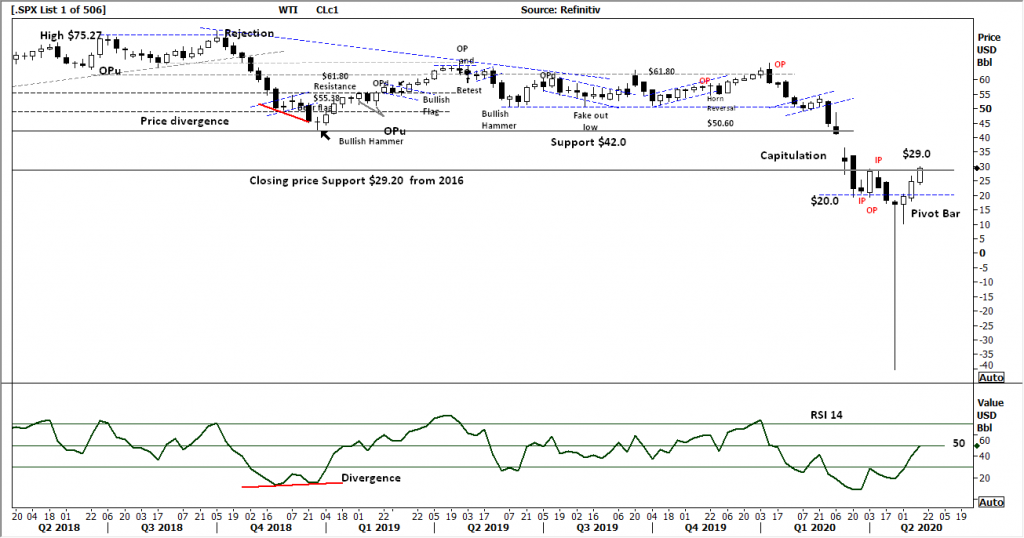 Comments from last week:  WTI continues to recover from the supply settlement debacle of 2 weeks ago. The “pivot bar” of last week has followed through. However the $29 resistance level remains a barrier in the short term.

Expect consolidation below this level in the coming days.