With light holiday volumes, along with political chaos in the US continuing to have ramifications in the markets. Many traders sit on the sidelines waiting for clarification of price direction in the top weighted stocks both here in Australia along with the US pricing in the new stimulus package, markets have traded in short ranges.

Behind the scenes small cap stocks continue to make substantial gains accompanied by many smaller resources and commodity equities.

A week of consolidation, the 6670 point level is identified as the Weekly “midpoint support” point, and holding so-far. A break below this level can give an early warning of weaker prices ahead.

Indicator: Relative Strength
The RSI indicator has remained over the key 50 level, however now showing a slowing advance as the indicator rolls further sideways to higher.

Indicator: MACD.
MACD has moved to a swing buy signal, again this highlights how slow this indicator can be in a fast market. It should be acknowledged this indicator is very slow to react on a weekly basis and may continue to track sideways in the coming weeks as it did during 2019. 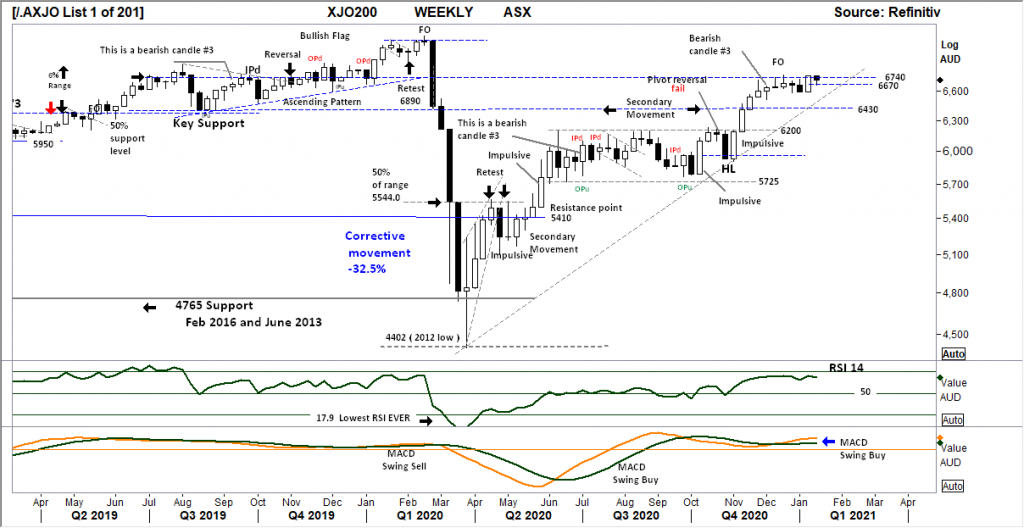 Comments from last week: Comments of last week suggested a bullish outcome for the week, the Weekly chart now confirms the anticipated price direction with a closing price above the key resistance level of 6740.

This is a strong indicator for a continued price rally in the coming week.

The expectation of the Q1 2020 high being retested can be developed as the underlying Primary trend reasserts itself.

Last Wednesday / Thursday set a new “pivot reversal” and higher low, this can be a very bullish setup. The daily chart better displays the developing consolidation range between resistance of 6765 and support of 6510. A breakout higher is expected based on the rising RSI and current higher low in place.

Indicator:  Relative Strength
Last week the bearish momentum signal was negated as the RSI put in a 2nd “higher low” prior to the continued move over the key 50 level. Expectation would be for a continued track higher, showing increasing price momentum.

Indicator: VOLUME
Volumes are traditionally light during this holiday period, so not that much can be read into this underlying indicator. However the high volume of last Thursday Friday is encouraging for further Bullish price movement. 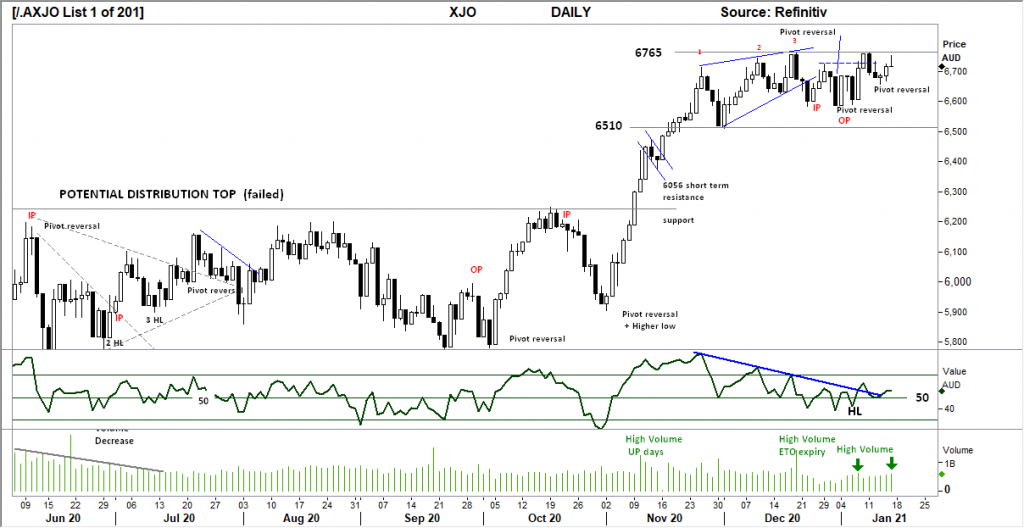 Comments from last week:  Strong Daily price ranges to the upside remain the notable observation in the Daily time frame. Last Friday closing on the high of the day, suggests some follow through in the coming days. The key stocks to watch for this remain the index heavy weights, banks ANZ,NAB,CBA and WBC, along with APT, WES and CSL This seasonally bullish time of the year may play out for several weeks yet.

S&P 500 WEEKLY
Price structure:
The “outside period” of 2 weeks ago remains the key bar / range in this Weekly chart. Followed by last weeks “inside period” a short reversal could be anticipated in the coming week.

The underlying Primary trend remains UP, but the current short range IPd shows a loss of momentum and may lead to a short term retracement. 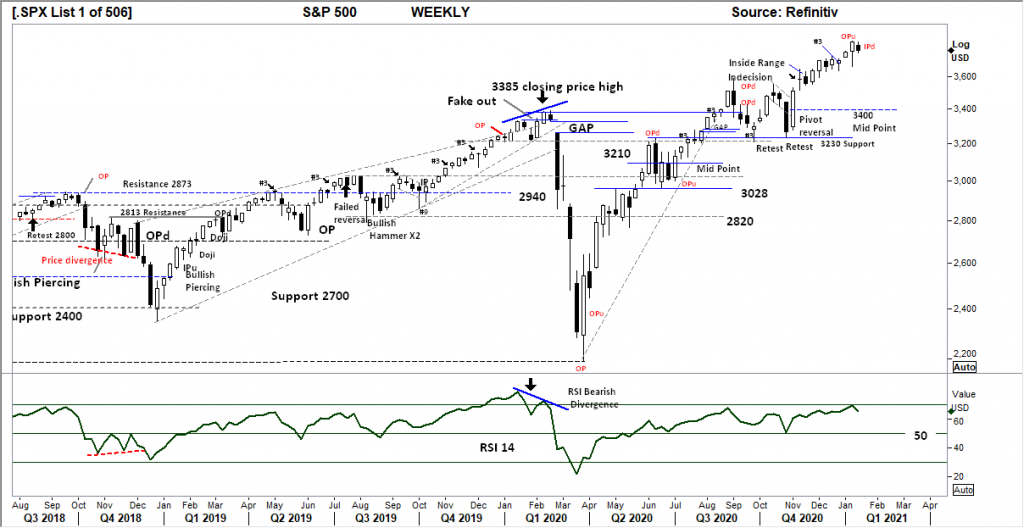 Comments from last week: A strong “outside range” (OPu) often the marker of confusion in price discovery, and will remain the key feature of the chart in the coming week. The lower shadow indicates selling into an already rising market (smart money). This is a time of caution for a further retracement and seems a most likely outcome.

S&P 500 DAILY
Price structure:
The Daily S&P displays a bearish pivot reversal in place with Fridays low close below Thursdays low.  This has the potential to move lower inline with the loss of momentum displayed in the RSI. A short retest of 3700 would be the first target in any further declines.  Primary Trend remains UP, so any retracement would be a place to “buy the dip” in the short term.

Indicator: Relative Strength
Relative Strength short term has turned lower from over the 70 level, it is a measure of immediate weaker price momentum and signals and extended move ending. The RSI should be monitored for a movement below the 50 level and further move below key 30 level as a loss of upward momentum to confirm divergence. 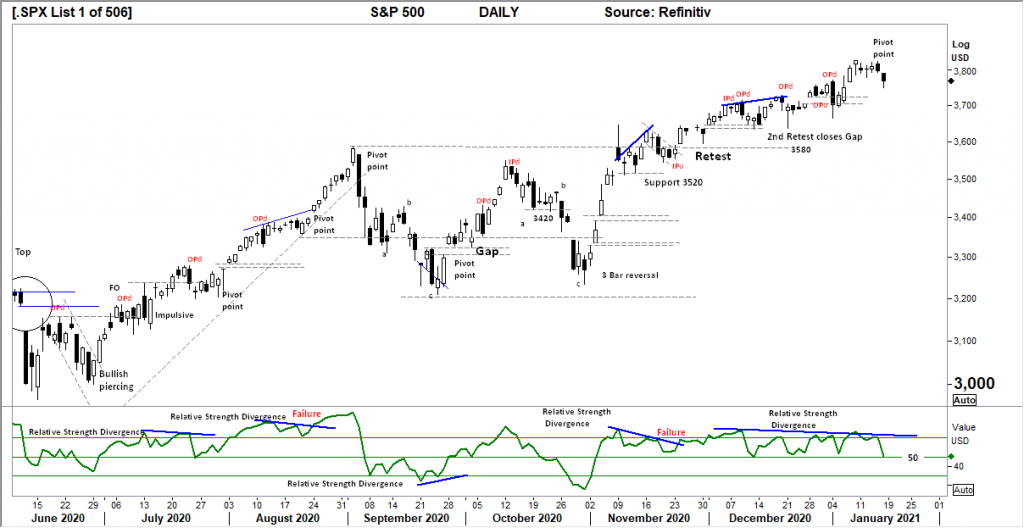 Comments from last week:  Last Monday’s OPd range, usually a turning point marker, has been overcome by a series of opening gaps. The daily chart remains “euphoric”, and caution would be used in being “too long” in this market. No significant retracement has occurred since October 2020, it should be noted the Relative strength has moving lower since early December 2020.

USD Spot GOLD – WEEKLY
Price structure:
Gold remains in a Primary down trend, as discussed at the end of 2020. The OPd from 2 weeks ago has command over the chart, midpoint support of $1826.00 is a key level to hold this week, a further breakdown would target $1764.0 support.
A closing price below the “c” low would instigate a new wave count as the beginning of an extended wave 3 down. 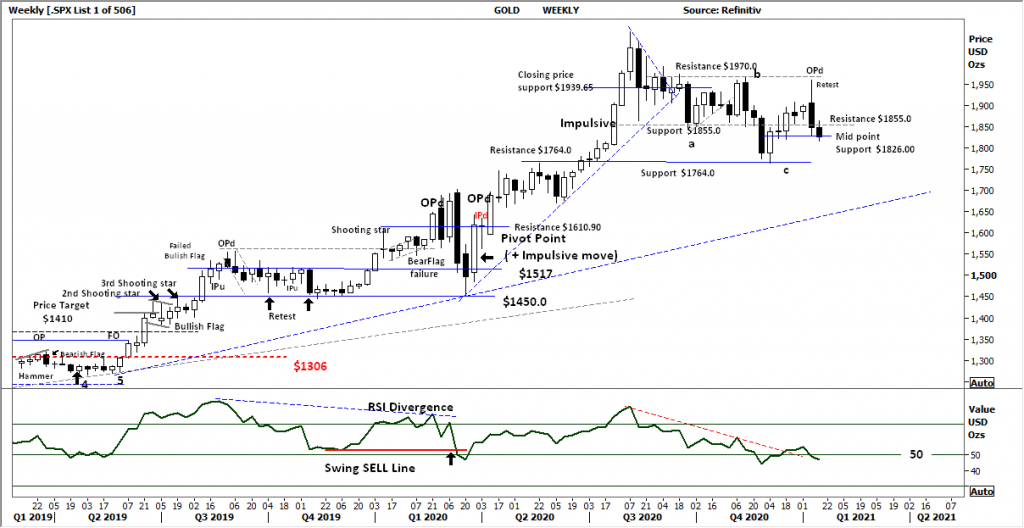 Comments from last week: Gold has seen a significant retest of the $1970.0 level with immediate rejection taking place. The current OPd is a bearish signal for further declines should the “midpoint support” of $1826 fail to hold. The $1764.0 level remains major support to hold on any further price declines, as GOLD continues to move lower within this Primary down trend.

AUD GOLD DAILY
Price structure:
The key observation in this chart and remaining as a high bearish impact for Australian Gold producers in the continued closing price below $2393.0 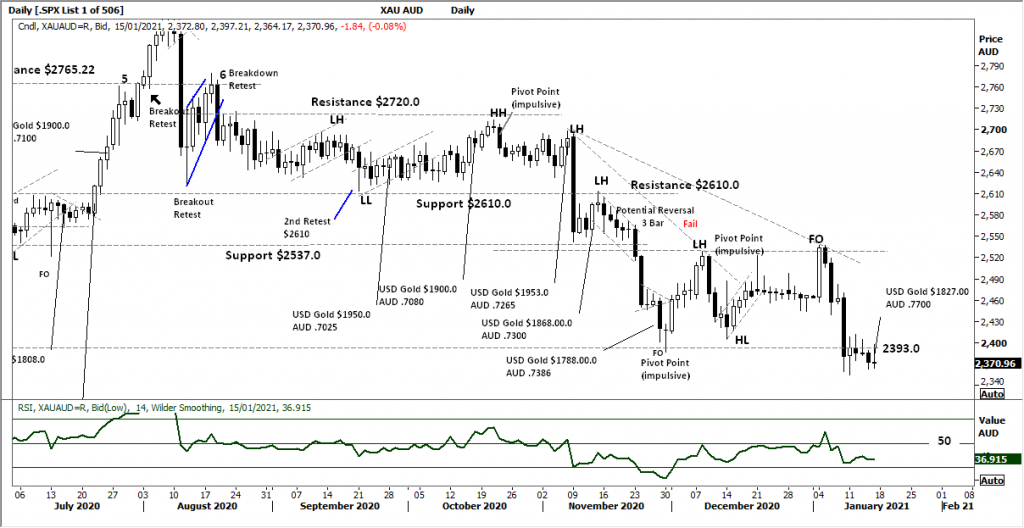 Comments from last week: Complete rejection of the $2536 will weigh on local Gold producers NCM, EVN and NST. A combination of a strong $AUD and weak gold prices has set the local producers up for further declines. The AUDXAU gold price closing below the $2393 .0 is a significant negative for trader sentiment towards local producers. 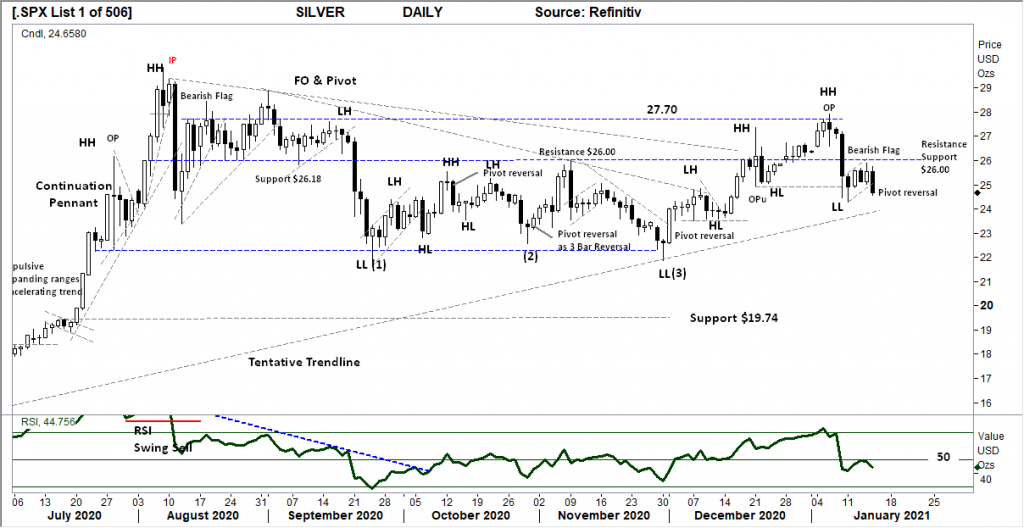 Comments from last week: The OPd from Wednesday has become the marker of rejection at the $27.70 resistance level. With the current close below the $26.00 level further declines could be expected. Big picture: Silver continues a new Daily UP trend, however this corrective movement can be the precursor to a change in the Daily trend.

COPPER DAILY
Price structure:  Inventories under pressure.
The Weekly chart of Copper is losing price momentum and remains at risk of entering a consolidation phase. Support at $3.47/$3.50 will remain a critical level to hold on any price weakness in the coming days.

Indicator: Relative Strength
Relative Strength has remained over the 70 level (just), underlying the strong momentum move underway. An early BEARISH divergence signal has so-far further developed, this will still be monitored in the coming week. Further confirmation of a top will be shown if price moves below the $3.48 level and the RSI moves lower below the 70 level. 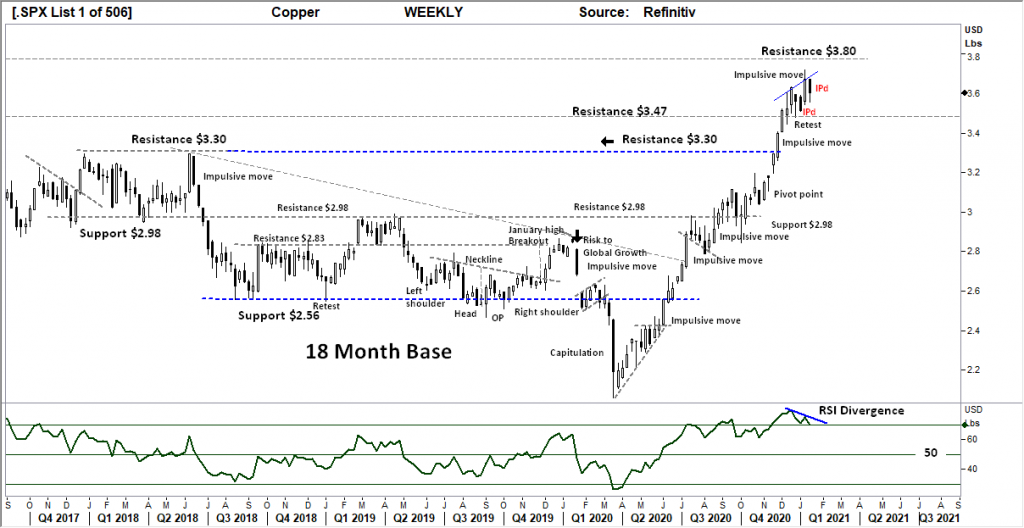 Comments from last week:  With another “impulsive range” following the short consolidation period retesting the $3.47 – $3.50 level, Copper looks set for further gains as the $3.80 resistance remains in place.

The weekly “close” has remained over the highs of 3 weeks prior keeping the Buyers in control.

AUSTRALIAN VOLATILITY INDEX
Global events of political chaos in the US and concerns around the BREXIT negotiations, along with slowing economies and rising jobless rates all point to higher price for “protection” Put options. The XVI remaining above the “13” level is of some concern. 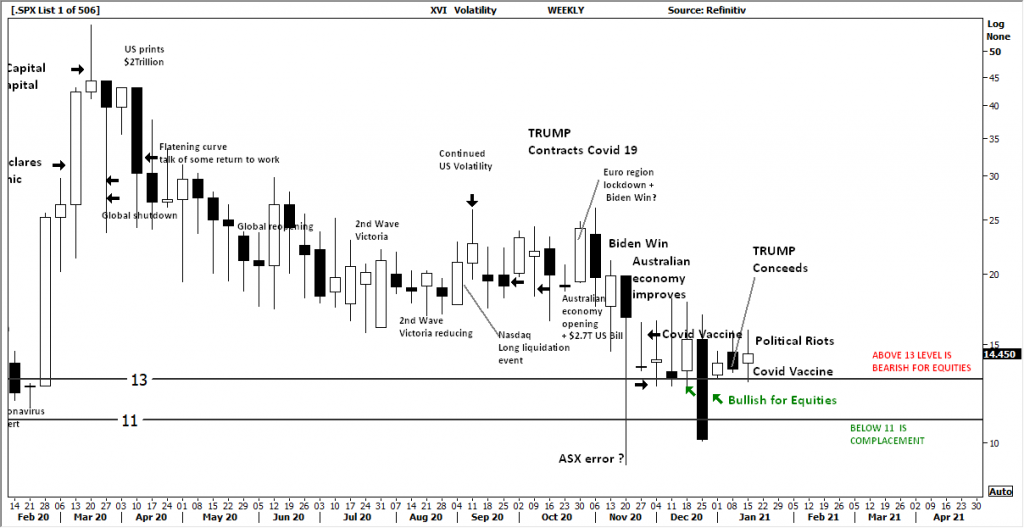 Comments from last week: The XVI remains supportive of bullish equity prices. The cost of future risk cover has not responded (increased) to last weeks furore in US politics. Markets remain buoyant for higher prices.

USD  DOLLAR INDEX
Price structure:
The USD index has traded and closed above the key resistance level of 90.66, following the Bullish divergence signal shown in the RSI. (discussed last week)
A further retest of the down trend line would be a positive outcome, a close above the trend line at 91.66 would be very bullish for further gains.

Indicator:  Relative Strength
While the RSI has again moved over the 50 level as a higher low is set, the indicator remains a signal of strengthening price momentum above the key 50 level. Traders would look for an RSI move over the 70 level to suggest a more significant momentum move higher is underway, this remains highly probable. 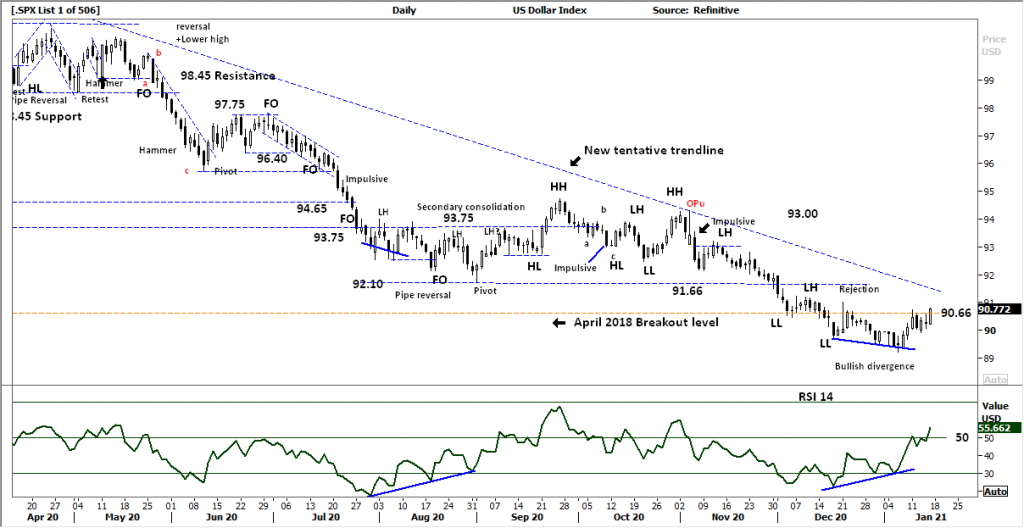 Comments from last week:  The price chart that controls everything! The USD index has set a very strong “Bullish divergence” signal as the Relative Strength track higher. It could be expected with a close over the 90.66 level a further “short cover” by traders may take place, this would be a very Bullish signal for further gains.

WTI CRUDE OIL
Price structure: This commodity is news driven by supply -demand.
Following the impulsive price move 2 weeks ago, the Support / Resistance level of $50.60 is now the key level to hold in the coming week.

Indicator: Relative Strength
RSI turning higher over the 50 level and now over 70 remains in a very good place for further momentum price gains. As the indicator is now over 70, this will still be monitored for a potential divergence signal. 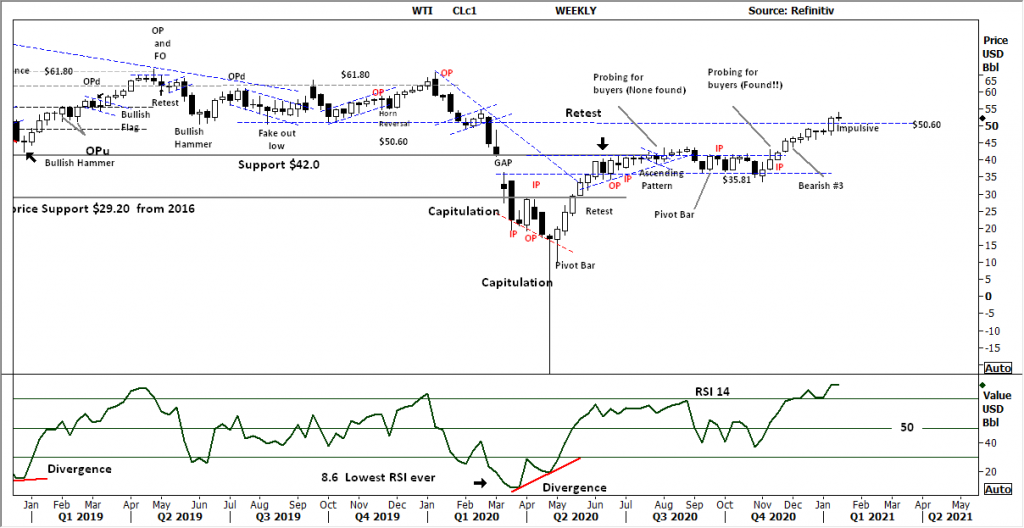 Comments from last week: A strong close over $50.60 is notable as this key resistance level is breached on a strong range week.