A week of chaos in US politics has failed to undermine the markets, even as some equity valuations continue to extreme levels and the surrounding platforms of Commodities and Crypto mirror the “euphoric” trader sentiment.

All major Indices in the US posted a weekly “outside range” often the marker of a turning point.

This should not be read as a market top, but a resting consolidation period.

Ultimately this current euphoria will end badly, and as in the past the justifications will be explained post crash.

Gold and Silver entered a corrective movement late in the week. This will have further ramifications in the coming days as the underlying bearish price movements defy the bullish commentary. Traders were reminded once again, price rules everything.

Comments of last week suggested a bullish outcome for the week, the Weekly chart now confirms the anticipated price direction with a closing price above the key resistance level of 6740. This is a strong indicator for a continued price rally in the coming week. The expectation of the Q1 2020 high being retested can be developed as the underlying Primary trend reasserts itself. The 6430 level remains the primary support level.

Indicator: MACD
MACD has moved to a swing buy signal, again this highlights how slow this indicator can be in a fast market. It should be acknowledged this indicator is very slow to react on a weekly basis and may continue to track sideways in the coming weeks as it did during 2019. 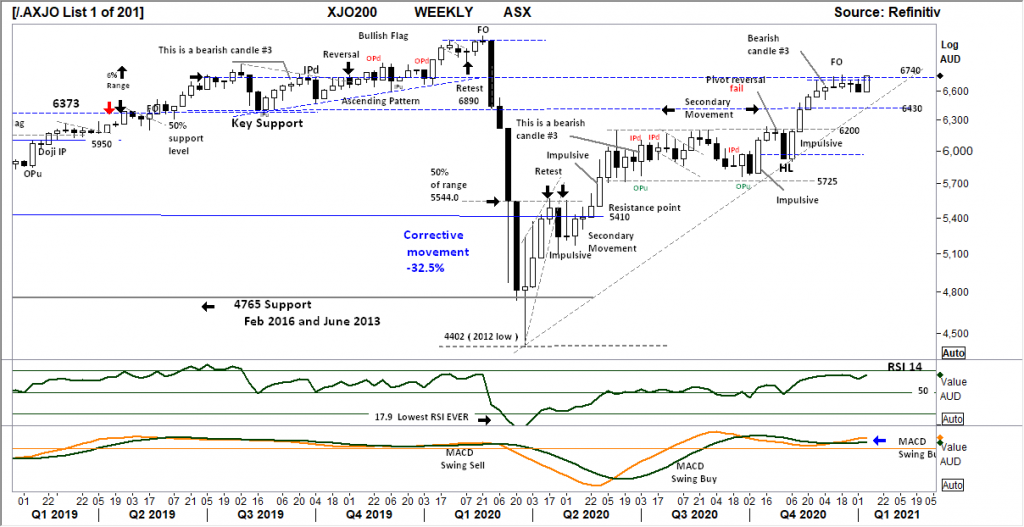 Comments from last week: The developing reversal signal in the Weekly chart may be the result of light risk off prior to the Christmas period. The close of last week on the low is a very Bullish signal for the coming week and worth monitoring for a long entry. The final down close bar can be used as the reference point for this weeks price action, with close above the 6275 high as the bullish continuation signal.

Strong Daily price ranges to the upside remain the notable observation in the Daily time frame. Last Friday closing on the high of the day, suggests some follow through in the coming days. The key stocks to watch for this remain the index heavy weights, banks ANZ,NAB,CBA and WBC, along with APT, WES and CSL. This seasonally bullish time of the year may play out for several weeks yet.

Indicator:  Relative Strength
Last week the bearish momentum signal was negated as the RSI put in a “higher low” prior to the move over the key 50 level. Expectation would be for a continued track higher, showing increasing price momentum.

Indicator:  VOLUME
Volumes are traditionally light during this holiday period, so not that much can be read into this underlying indicator. However the high volume of last Thursday is encouraging for further Bullish price movement. 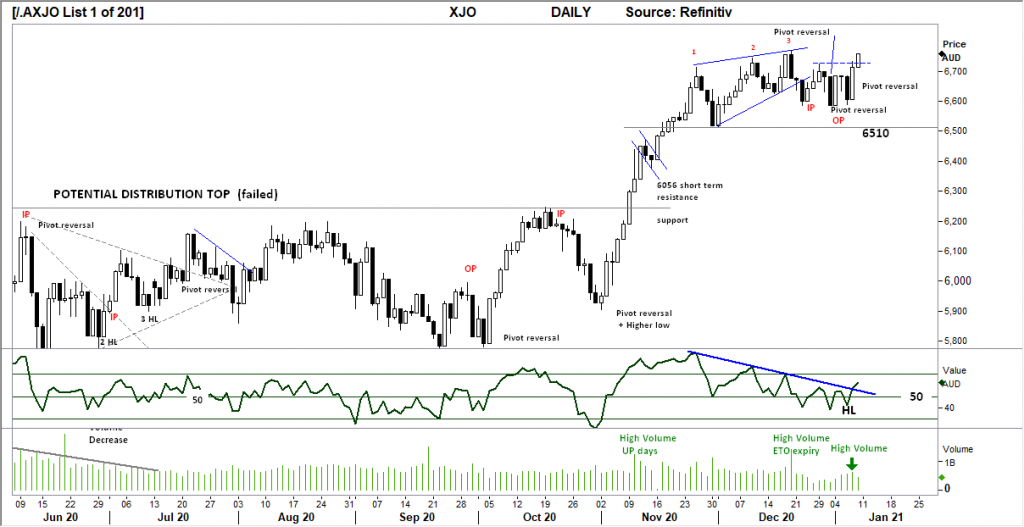 Comments from last week:  A broader consolidation pattern can be seen developing in the XJO Index via the Daily chart. Last Thursday’s large range when compared to the early part of the week indicates selling into the close (risk off) prior to the holiday period. On market open as risk is re-assumed this 6575 support area may set the base for higher prices.

A strong “outside range” (OPu) often the marker of confusion in price discovery, and will remain the key feature of the chart in the coming week. The lower shadow indicates selling into an already rising market (smart money). This is a time of caution for a further retracement and seems a most likely outcome. 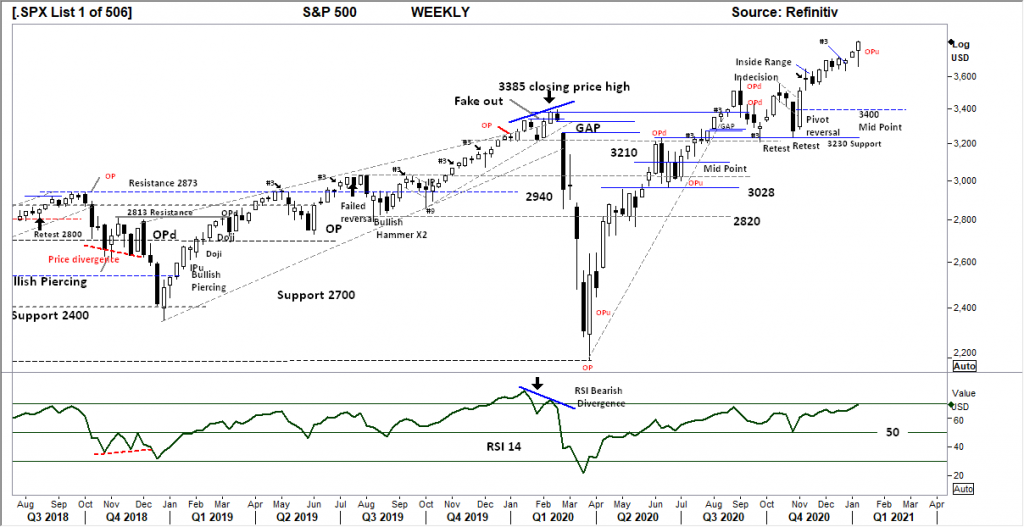 Comments from last week: Last week’s strong Gap open only resolves the market to close the Gap as quickly as possible to remain Bullish. The short range week can be the result of light Christmas volumes, however the chart remains very Bullish for further gains. Primary Trend remains UP.

S&P 500 DAILY
Price structure:
Last Monday’s OPd range, usually a turning point marker, has been overcome by a series of opening gaps. The daily chart remains “euphoric”, and caution would be used in being “too long” in this market. No significant retracement has occurred since October 2020, it should be noted the Relative strength has moving lower since early December 2020. 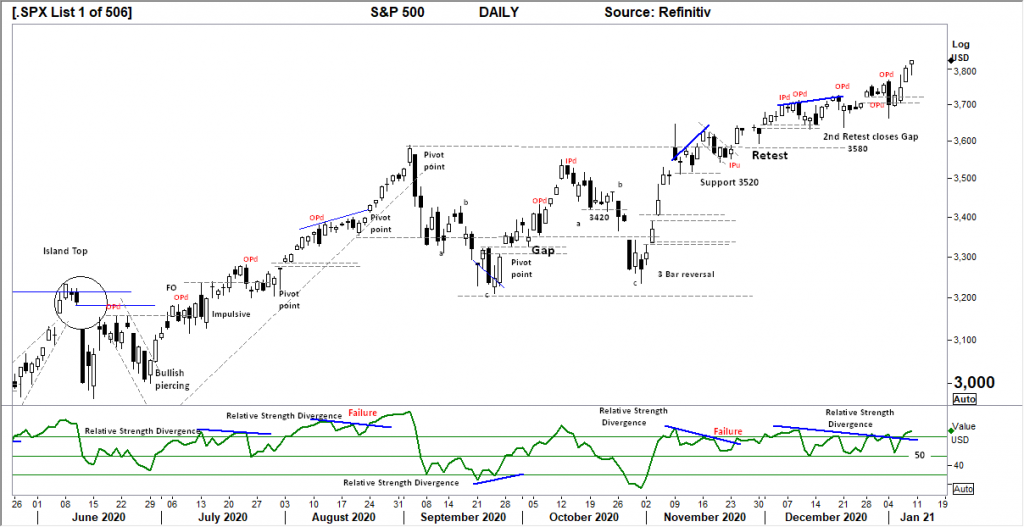 Comments from last week:  The shorter term daily chart shows an Outside period from last Thursday closing towards the high. Often the OPu will mark an interim high point in pricing, this provides the opportunity for the market to close the immediate Gap below. Early price consolidation would be a Bullish signal for further price gains in the coming weeks.

USD Spot GOLD – WEEKLY
Price structure:
Gold has seen a significant retest of the $1970.0 level with immediate rejection taking place. The current OPd is a bearish signal for further declines should the “midpoint support” of $1826 fail to hold. The $1764.0 level remains major support to hold on any further price declines, as GOLD continues to move lower within this Primary down trend. 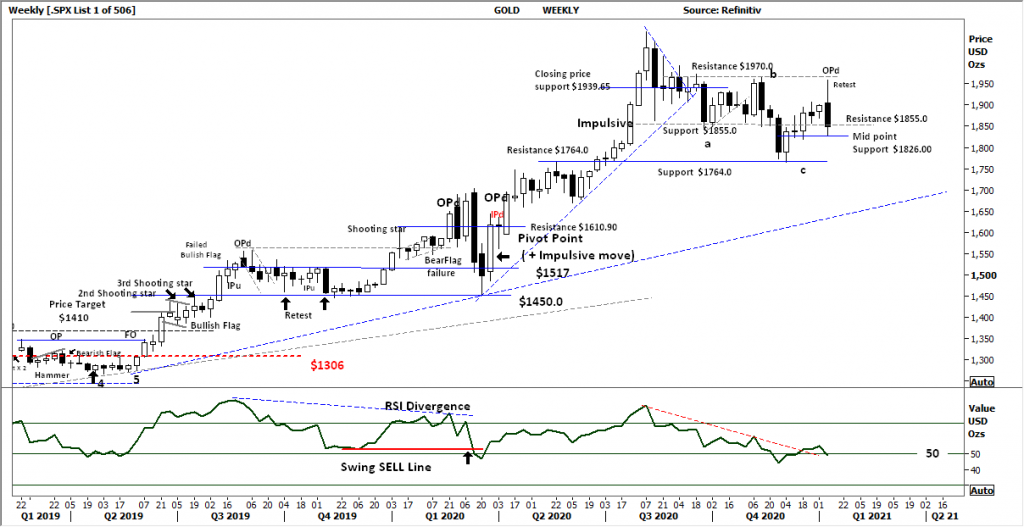 Comments from last week: The Support Resistance level at $1855.00 is the key level to monitor in the coming week. Momentum has turned higher (See RSI note below) with the next resistance level shown at $1970.0

As mentioned prior to Christmas the a,b,c pattern has played out with a key reversal now confirmed.

Technically the Weekly chart displays a “down trend” so any price retracement from these levels would be required to find price support before the $1764 level to confirm a potential UP trend coming into play for early 2021.

AUD GOLD DAILY
Price structure:
Complete rejection of the $2536 will weigh on local Gold producers NCM, EVN and NST. A combination of a strong $AUD and weak gold prices has set the local producers up for further declines. The AUDXAU gold price closing below the $2393 .0 is a significant negative for trader sentiment towards local producers.

This indicator has swung around below the 50 level since August. This momentum indicator needs a continued swing higher over the key 50 level in line with any price gains to confirm a valid buy signal. 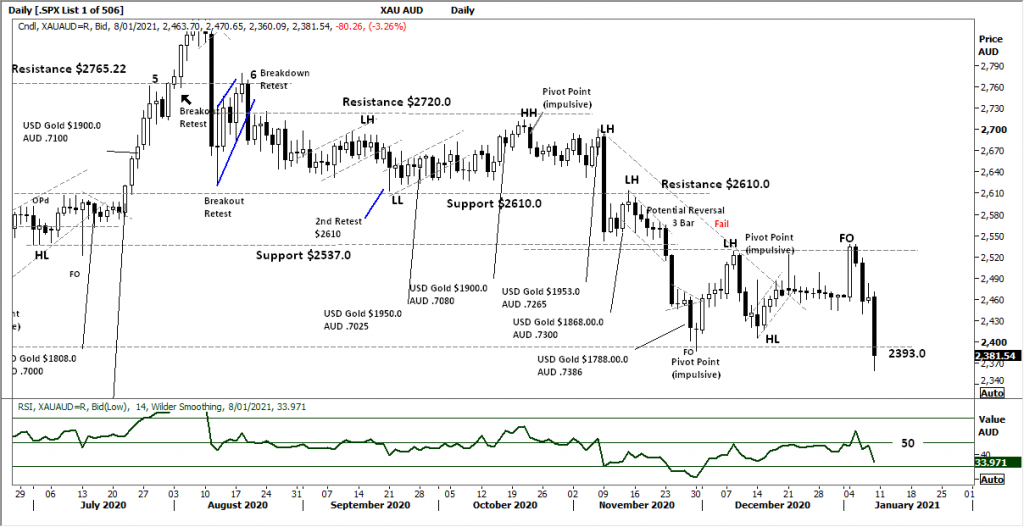 Comments from last week: Australian Gold producers continue to find price support as the AUDUSD Gold price remains flat as the rising $AUD brings pressure on this USD Gold cross rate. The Daily chart gives no indication of future price movements as this consolidation takes place. The HL of Mid December is an early sign of strength, but has much further to play out with a close over the $2530 level to confirm a Trend Change.

SILVER DAILY
Price structure:
The OPd from Wednesday has become the marker of rejection at the $27.70 resistance level. With the current close below the $26.00 level further declines could be expected.

Big picture: Silver continues a new Daily UP trend, however this corrective movement can be the precursor to a change in the Daily trend. 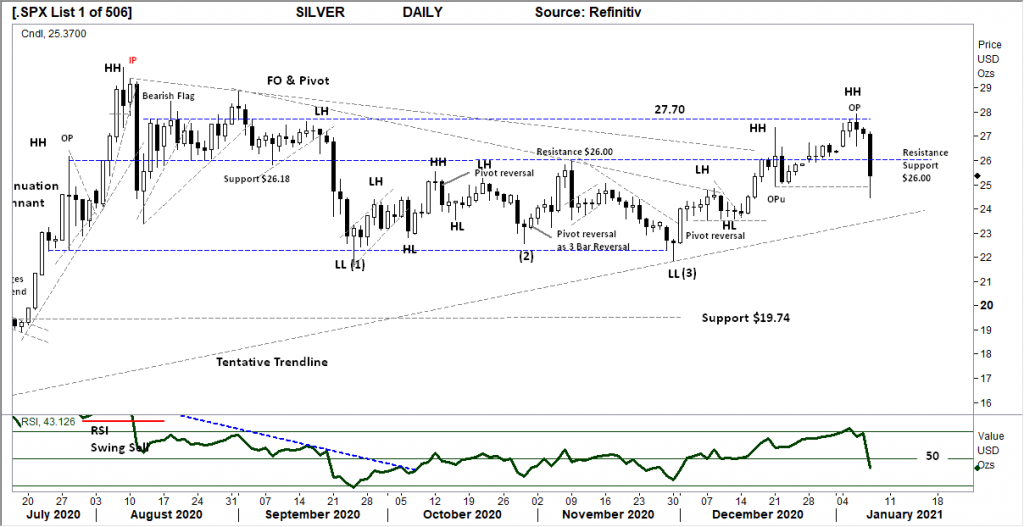 Comments from last week: With the $26.00 Support level tested and holding, this will be the key support test level for the early 2021 open this week. This level has provided support and resistance from July 2020 and remains the key level to monitor in the coming days.

COPPER DAILY
Price structure:  Inventories under pressure.
With another “impulsive range” following the short consolidation period retesting the $3.47 – $3.50 level, Copper looks set for further gains as the $3.80 resistance remains in place. The weekly “close” has remained over the highs of 3 weeks prior keeping the Buyers in control.

Indicator: Relative Strength
Relative Strength has remained over the 70 level again, underlying the strong momentum move underway. An early BEARISH divergence signal has failed so-far, this will still be monitored in the coming week. Further confirmation of a top will be shown if price moves below the $3.48 level and the RSI moves lower inline. 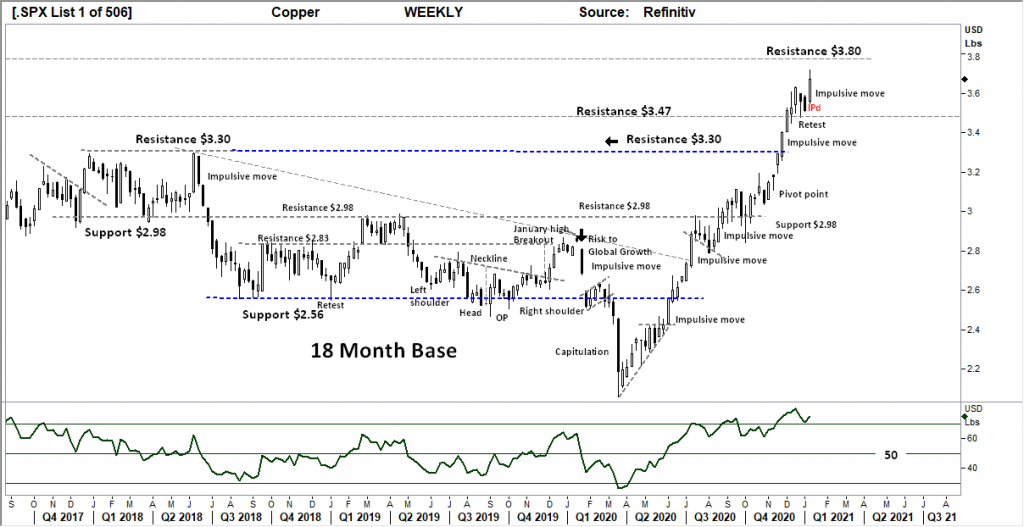 Comments from last week:  The developing support level of $3.47 will remain the key level in the coming week.

Last week’s inside range is considered a consolidation period and will be the key immediate support level to monitor.

Copper remains in short supply on the London Metals exchange as demand increases with the growing Chinese economy, this scenario will remain the price driver in early 2021. 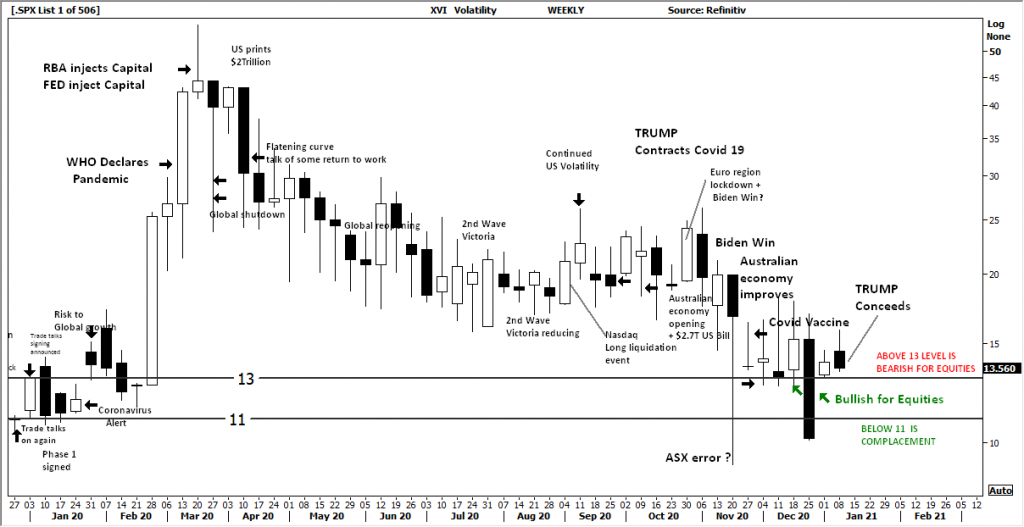 Comments from last week: The Australian volatility index remains mildly Bullish for Equity gains as the  reading remains low towards the 13 level. This news driven volatility indicator has been in decline from the highs of March 2020 and now looks set to remain low as the Covid Vaccine begins an international rollout.

USD DOLLAR INDEX
Price structure:
The price chart that controls everything! The USD index has set a very strong “Bullish divergence” signal as the Relative strength track higher. It could be expected with a close over the 90.66 level a further “short cover” by traders may take place, this would be a very Bullish signal for further gains.

Indicator:  Relative Strength
While the RSI has again moved over the 30 level as a higher low is set, the indicator remains below the key 50 level. Traders would look for an RSI move over the 50 level to suggest a more significant momentum move higher is underway, this remains unlikely. 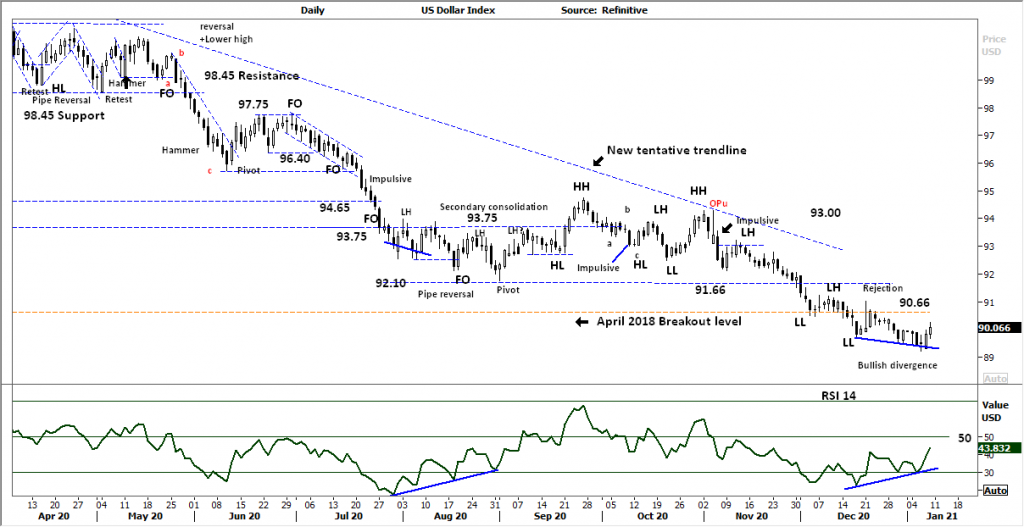 Comments from last week:  The long term picture of the USD Index remains in a Primary down trend. In the short term a Bullish divergence is developing as the Relative strength Indicator makes a higher low as the DXY value set a new low at the close last Thursday.

The short term view is setting up a price recovery to potentially retest the 90.66 level.

This will bring pressure onto the $AUD which in turn may help the AUD Gold price and the underlying Australian equities Index.

WTI CRUDE OIL
Price structure: This commodity is news driven by supply – demand.
A strong close over $50.60 is notable as this key resistance level is breached on a strong range week.

Indicator: Relative Strength
RSI turning higher over the 50 level and now over 70 remains in a very good place for further momentum price gains. As the indicator is now over 70, this will be monitored for a potential divergence signal. 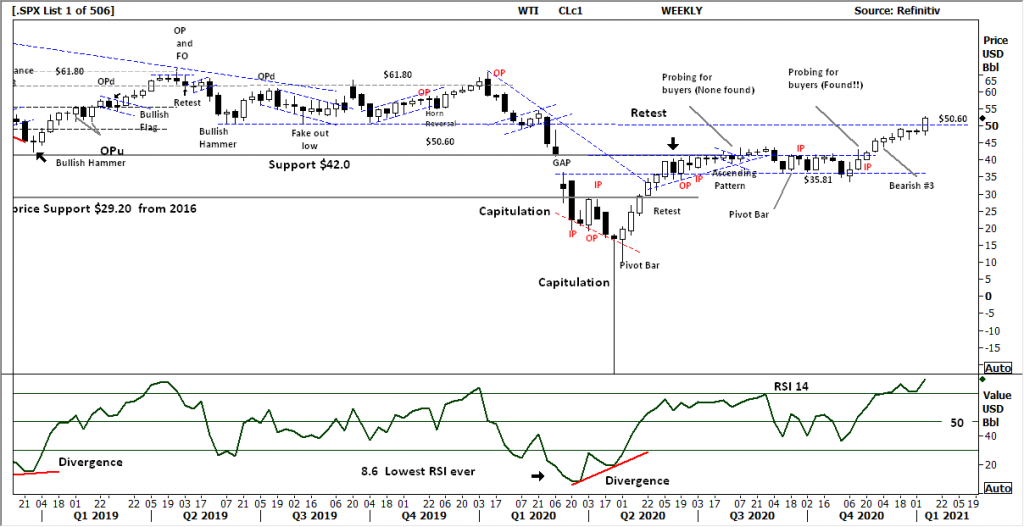 Comments from last week: Further consolidation under the $50.60 seems the most likely outcome for the WTI price structure. WTI has entered a Primary UP trend, so a simple consolidation period would remain a very bullish outcome in the coming weeks. A closing price over the $50.60 level would allow the WTI contract to target $61.80.