The second week of follow through to the downside, BUT the range is shorter and volumes lighter. A strong sign of seller exhaustion.

Gold continues to overcome reversal signals to put in a new weekly high, SILVER has NOT confirmed.

WTI closes below a significant support $42.0 level and remains vulnerable to further declines.

With the week closing on the low of 6216 points the range shows sellers closing the market, however the range is shorter from the previous week a signal of lack of commitment.

Relative strength remains below the key level of 50, showing a loss of positive momentum. 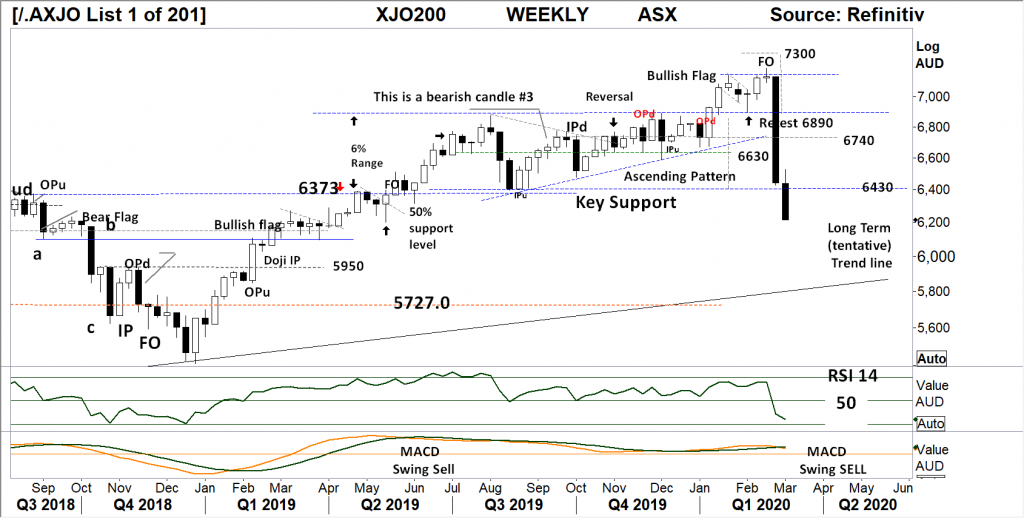 Comments from last week: The FO bar of 2 weeks ago has now played out into a significant correction of price. The Weekly Chart now sit on the major support level of 6430, this will the level to hold this week on any potential recovery on prices, this seems unlikely. This large range movement could be difficult to overcome as sellers have control of the market.

XJO DAILY
Last Monday’s low of 6245 provided a key reversal signal. However the 6390 level is now the current key resistance level. Last Wednesday / Thursday confirmed this level.
Fridays low close shows sellers in control for the day.
Importantly the Relative strength indicator (14) has not made a new low and now shows the early signs of Bullish divergence. Traders should monitor this potential early bullish signal. 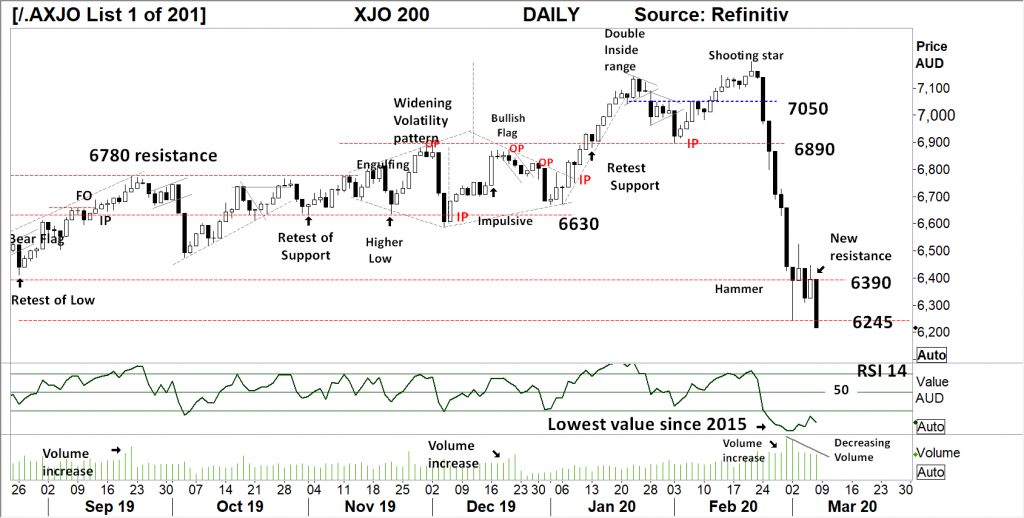 Comments from last week: The Daily chart shows the force of this corrective move as support levels have been disregarded on a daily basis, with the final low moving to test 6400 – 6430. Friday’s large range movement with the close at the low is a very bearish signal for further declines. Look for short term support at this level, as failure will see the psychological level of 6000 come into play. This type of movement during the past 5 trading days is “corrective” and can be the early stages of a Bear Market ahead.

S&P 500  WEEKLY
The S&P 500 has provided an early signal of support above the 2940 level, last week’s inside period is a sign of“balance” above this key level of support.
Relative strength bearish divergence remains in play, this market would be monitored for a breakdown and close below 2940 in the coming week as a signal for a retest of the long term trend line.
Relative strength (14) has turned higher as may be expected, but has not indicated an “oversold” condition, this should be treated with caution, as momentum is weak. 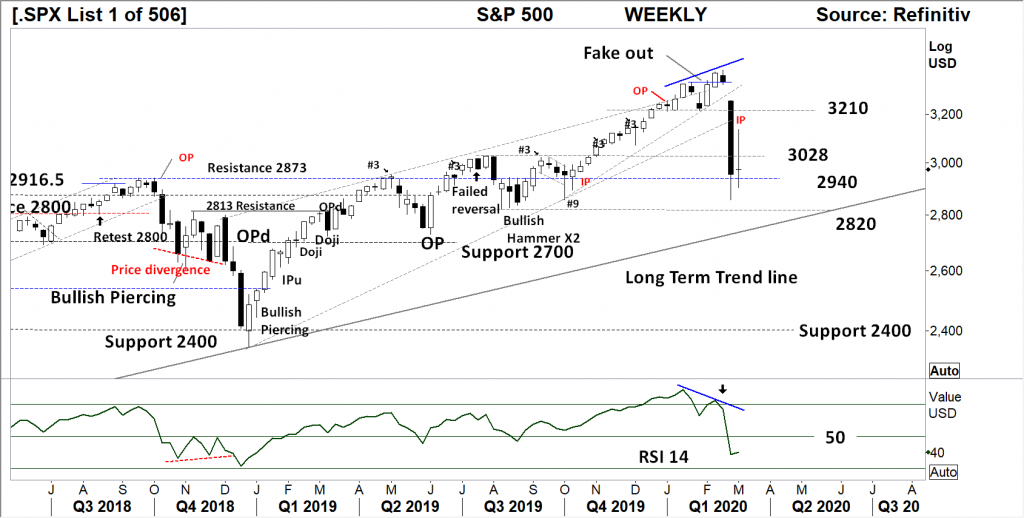 Comments from last week: Following the opening GAP this market has disregarded any form of “retest” of important support levels during this significant decline. All upside targets are now off the table. The current level of 2940 must hold in the coming week to avoid further significant declines.

S&P 500 DAILY
Early BEAR MARKETS are often characterised by short sharp rallies as Buyers look to “buy the dips”, the real capitulation is yet to show as closing prices remain above the 2940 level.
Relative strength remains below the key 50 level a sign of weak and bearish price momentum.
Traders would look for an opening “gap up” in early trade on Monday. 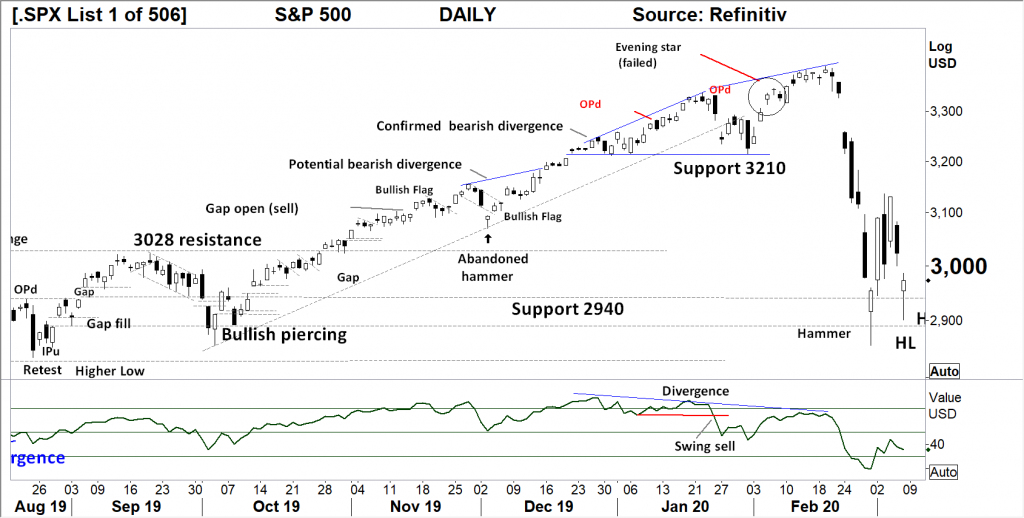 Comments from last week: From the Gap lower on Mondays open the sharp price falls have disregarded any intermediate support levels. Friday’s bar with the close above 2940 is regarded as a Bullish hammer and will require a “Gap” up to confirm a “morning star” type of short term price reversal.

DOW TRANSPORTS DAILY
With the retest of 8711 potentially complete on a short range week, this current level would now be monitored for further price support.
The high of the current weekly range has tested the 9670 and confirmed this level as resistance to monitored on any potential price rally in the coming days.
Relative strength has moved below “30” indicating weak price momentum. 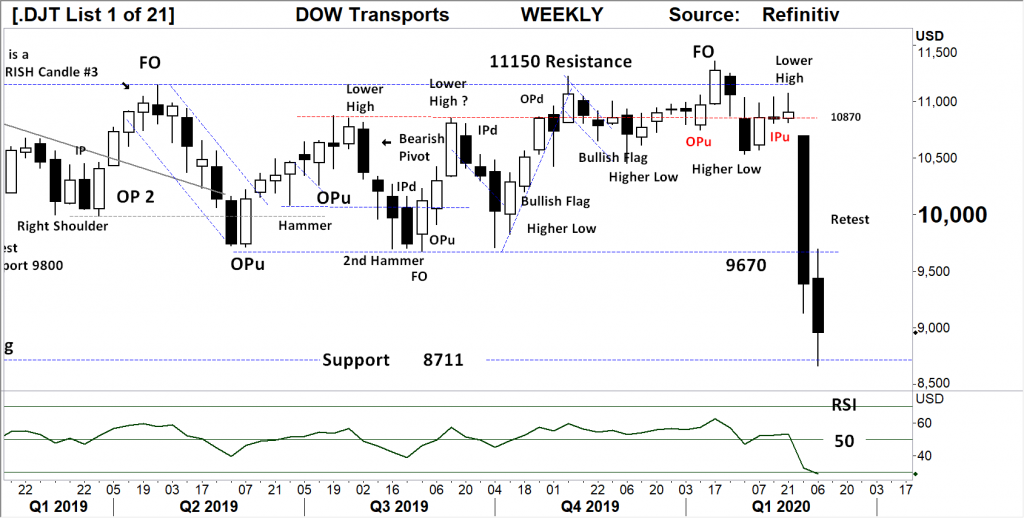 Comments from last week: From the bearish inference of 2 weeks ago the Transports now confirm the corrective mood of the current markets with a very large range movement. The Weekly close is below the important support level of 9670 and indicates further falls are likely in the near future, as the closing price is at the lower end of the price bar, and remains a very bearish sign.

GOLD WEEKLY
The significant observation on this chart is the new high ($1691.72) set, overcoming the OPd (outside period down close) a very bullish signal as price momentum remains strong.
The OPd remains in place as a statistically relevant marker of a “high within 3 periods”, within this primary UP trend.
Relative strength has failed to make a new high a sign of overall momentum slowing. 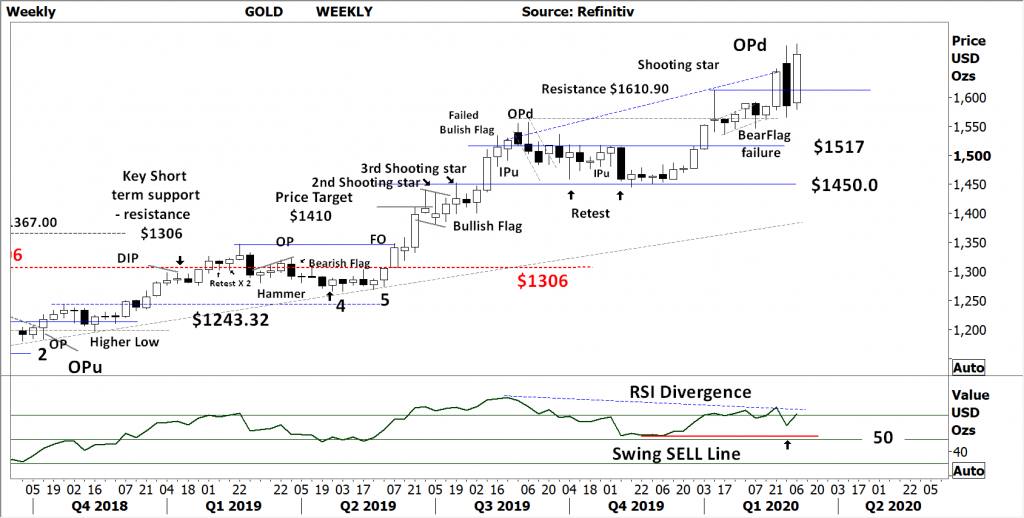 Comments from last week: The Weekly chart of GOLD shows a “pipe” or “engulfing” reversal with the final bar also and “outside period” this has high Significance for a high to be in place with a further price movement lower to come in this current week. Further weakness may see the breakout level of $1517 level tested in the coming week.

GOLD DAILY
The current higher low now in place has followed through to a new high.
The “fake out” is now set as price closes below the shooting start high, showing buyer unwilling to hold at a high price.
Relative strength remains as a potential bearish divergence signal as the indicator turns lower.
Should price weakness come into the market, $1610.90 remains as the key level to hold. 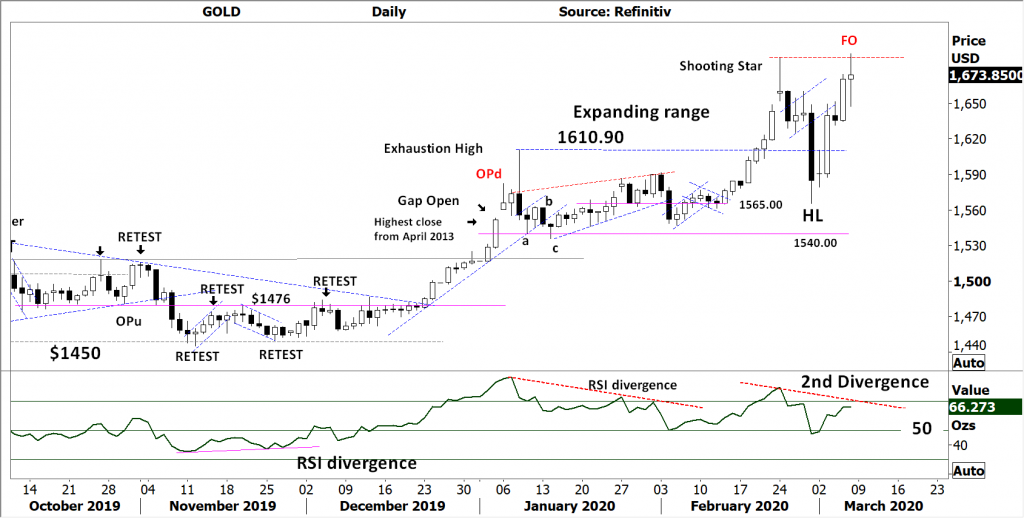 Comments from last week: Friday’s strong movement of 2 weeks ago as resulted in the “shooting star” on Monday with follow through lower. The inter-week bearish pattern has played out into the current retest of the breakout level above  $1580. Further price declines would be expected into the retest of the major $1540 Support level of January 2020.

The daily chart of Silver has NOT confirmed the bullishness of the Gold chart.
Current price action suggests a bearish flag pattern in play with a potential retest of $16.50 on any price break down.
Relative strength has “rolled” lower and remains below the key “50” level a sign of weak momentum. 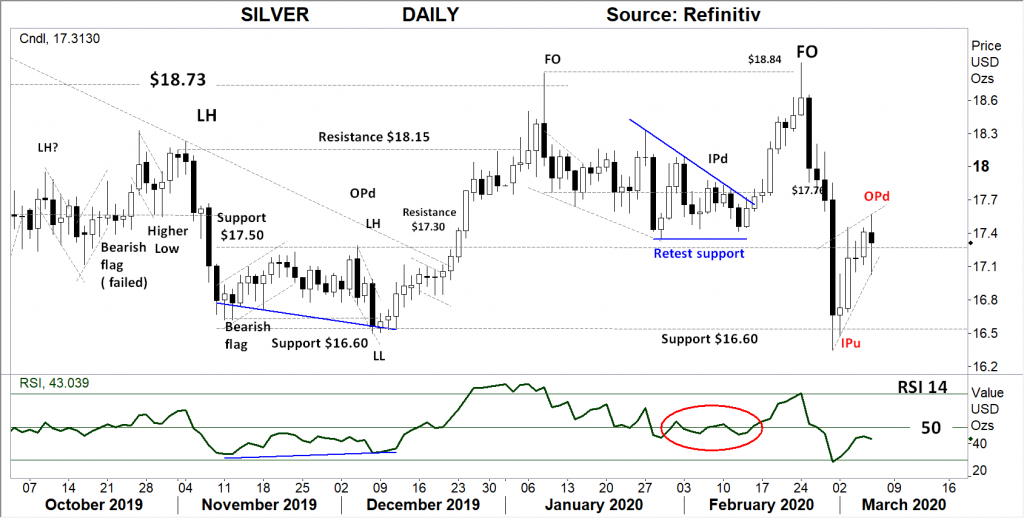 Comments from last week: Last Monday set the warning “FO” (Fake Out) reversal signal with follow through for the week. Friday’s very large price movement has the potential to follow through in the coming weeks. Traders would monitor the $16.60 level for a breakdown in price in the coming days, this type of “corrective” movement is a Bearish signal for further declines in this current risk off everything environment.

Current volatility levels, shows a further increase in forward volatility  values, this is a Bearish sign the market has increased immediate near term risk to valuations. This may again move higher in the coming weeks. 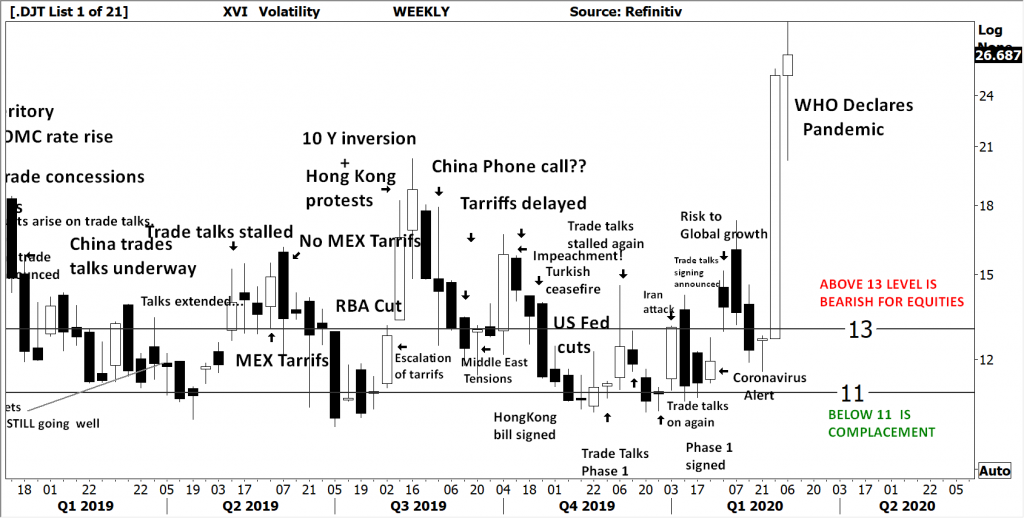 USD INDEX DAILY
The very large range movement below 96.57 suggests further weakness. For a bullish picture to develop the index must now trade higher from the confirmed 95.71 “fake out” low set on Friday.
96.57 to become resistance in any price rally in the coming days, a close over this level would be a very strong bullish signal.
Relative strength has moved below the “30” level indicating very weak momentum. 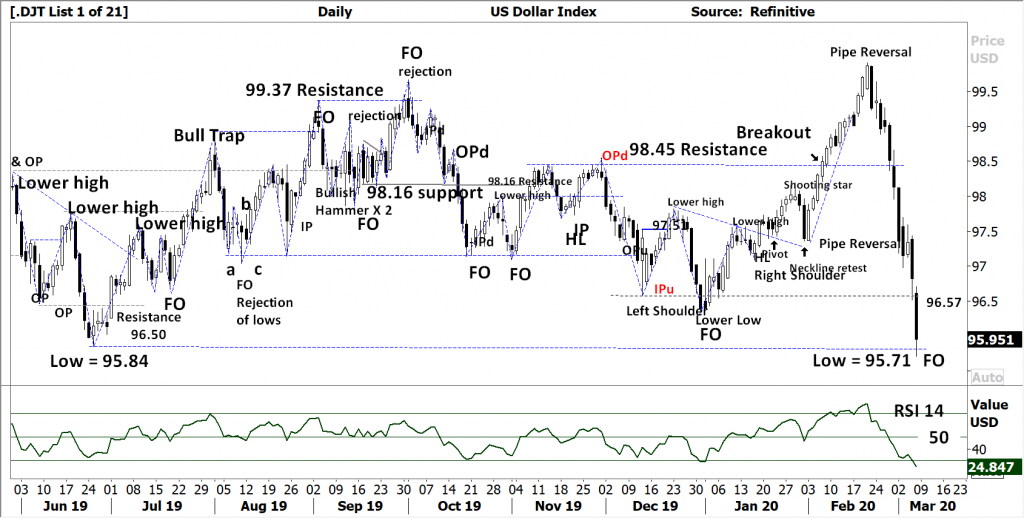 Comments from last week: Last week shows the 98.45 level broken, any price rally form this level may use this as the resistance level for sellers to again enter the market. Further downside targets of 97.5 and 96.57 are now in play.

WTI CRUDE OIL
With complete failure of $42.0 support in this now confirmed Primary down trend, WTI shows an upper shadow in the current weekly candle/bar a sign of higher price rejection. This is a very bearish signal for further declines in the coming days.

Further declines to the $40 level remain in play as the Relative strength moves below the “30” level indicating very weak price momentum. 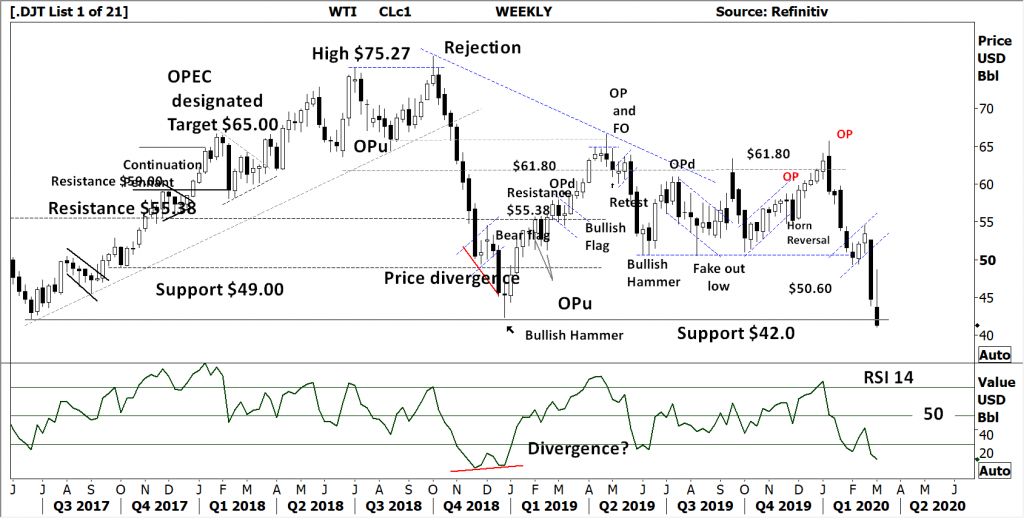 Comments from last week: The developing “bearish” flag pattern has played out into a further price decline below the important $50.0 level. Last week large range price bar has the potential to follow through to the projected $42.0 support level. A closing price break of the $42.00 significant support level would project a very bearish picture for further declines to $40.0 and $38.0.