Last week’s low saw the retest of the 6890 completed, with a high close in the range.

7300 remains the preferred target within this primary UP Trend. The current breakout structure remains bullish.
The RSI remains over the key “50” level and has not entered an extreme level. MACD remains a buy signal, but can be slow to react in this time frame 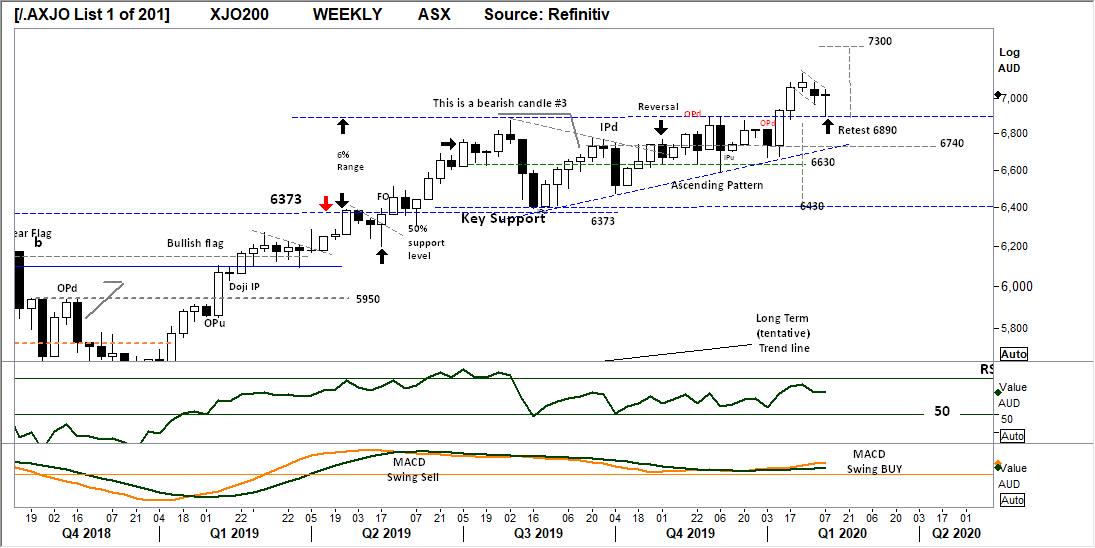 The WEEKLY chart of the XJO remains in a Primary UPTREND. With the week closing at 7017 points, this level remains vulnerable to a further breakdown. Further weakness would look for 6893 as Major support to be tested.
The current small range weekly bars indicate a lack of sellers, however this will change.

Monday’s retest of the 6890 followed with the Inside period has set the low with the follow on price rally higher. 7050 has now set up as the resistance level with Fridays rejection at this level. Trading volumes remain quiet strong suggesting accumulation rather than distribution. However to give an immediate continuation signal, a close over 7050 is required this week. Relative strength has moved over the “50” level but remains vulnerable to further declines. 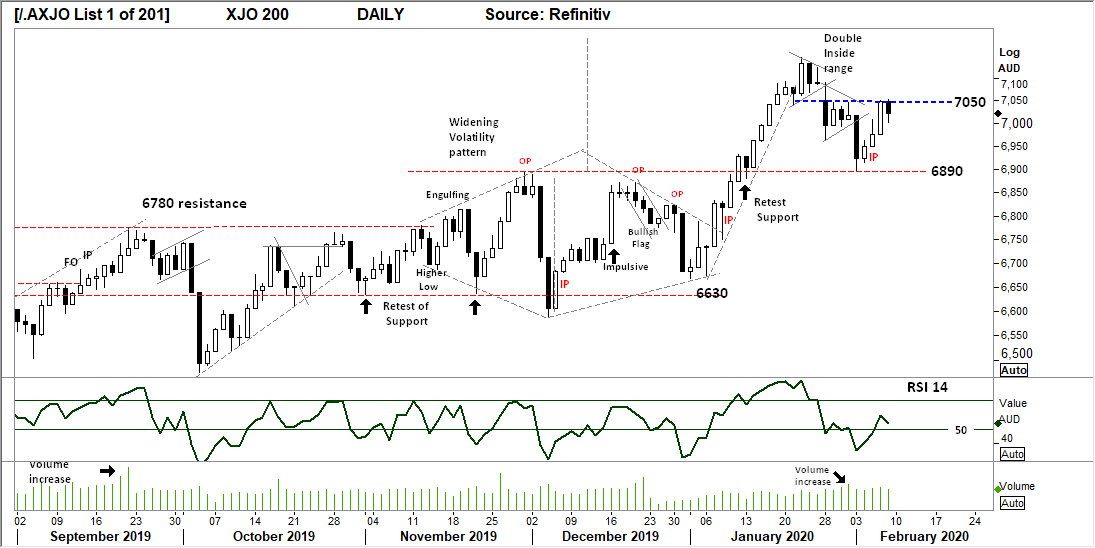 The S&P has posted a strong range, but the “close of the week” remained inside the previous high. This “Fake out” move can be a rejection signal. With the Primary UP trend in place and last weeks strong range further gains could be expected. Relative strength is again moving over the “70” level showing increasing price momentum, but keep in mind this is historical information. This market has a further technical target of 3600 for 2020. 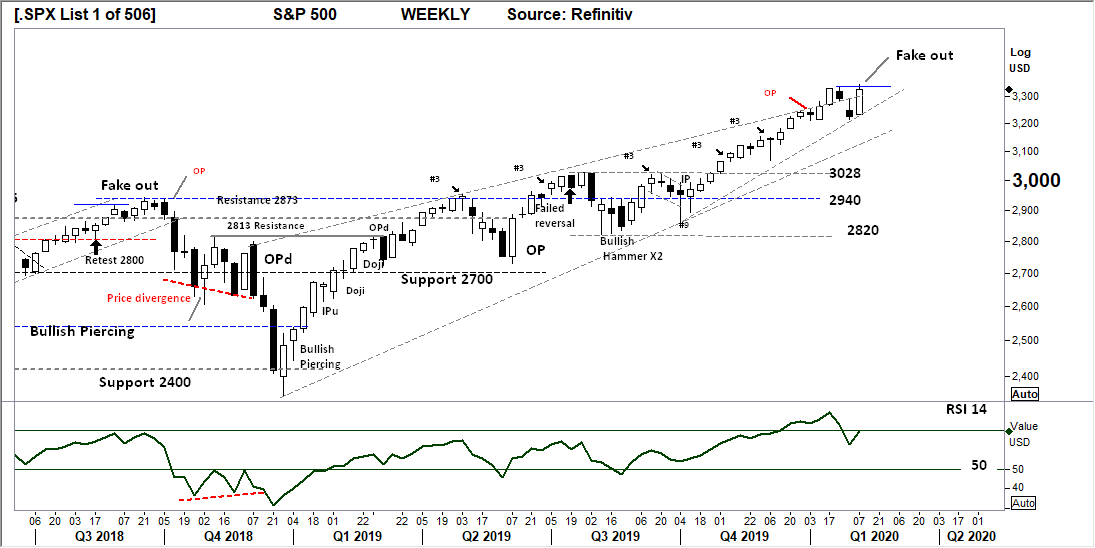 The Primary UP trend remains in place. As Volatility measures remain high.The weekly range with the low close is a bearish signal for further declines. 3028 remains the downside target as the first major support level to be tested.

An “evening star” formation, gives a high potential signal for a Gap down to occur at the open of the next trading session. Traders would look for a retest of the 3210 level in the coming days. A breakout over the evening start high would be very bullish for further gains Relative strength has again rolled over as momentum slows, but remains above the 50 level. 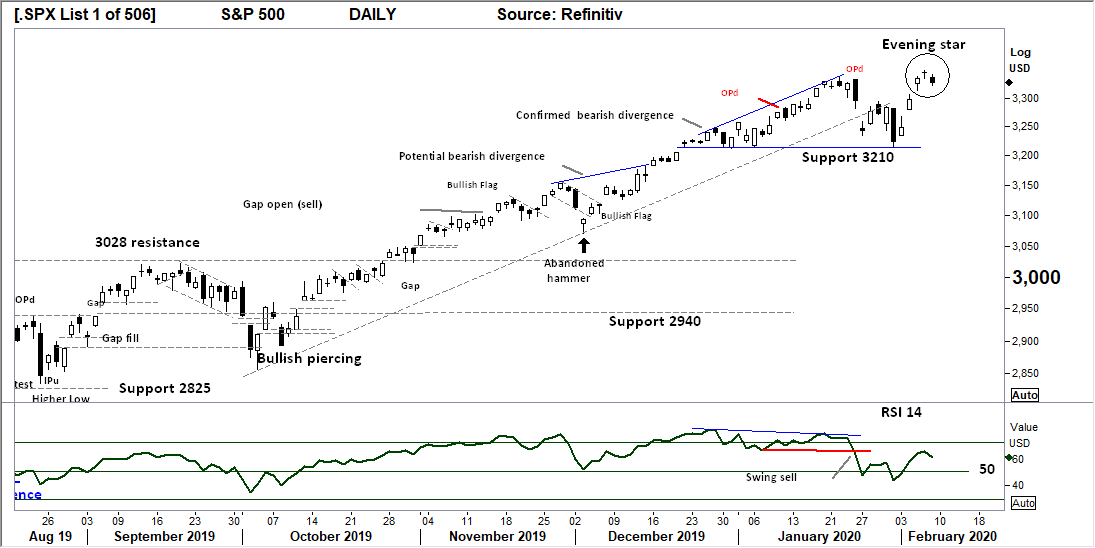 The primary Daily Up trend has now broken into a Down trend. With low at 3214 and the close at 3225, Fridays large range day now dominates the chart going forward.

Last weeks “Inside period” a sign of indecision remains below the 11,000 point breakout level of 3 weeks ago. 10870 has developed as the new resistance level to any immediate gains. A further breakdown below 10500 would be a very bearish signal. To remain a Bullish picture a close over 11150 is required to confirm the potential higher low marked. 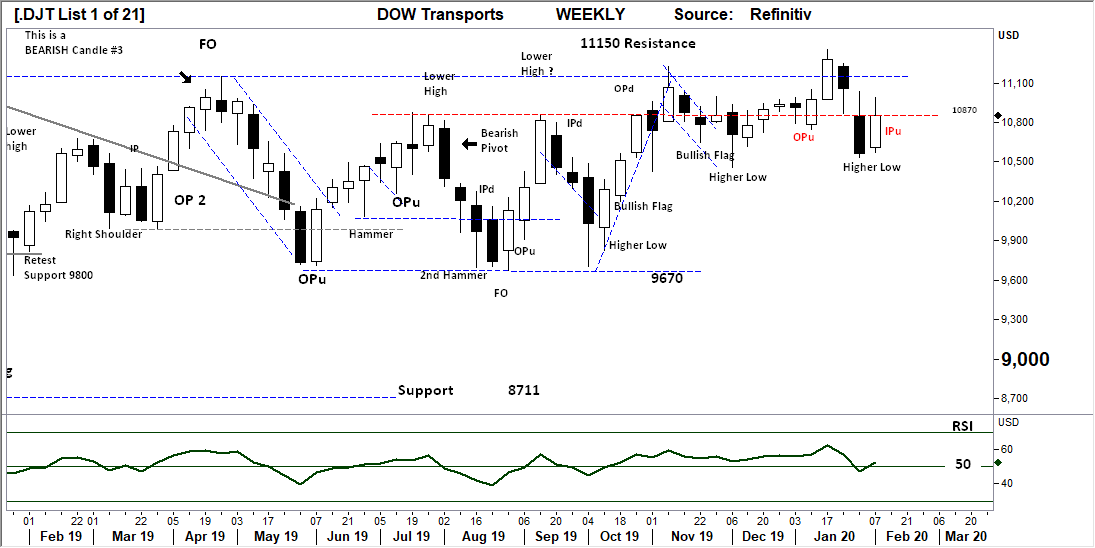 CONFIRMATION of the long term Bull market, a break of 11150 points Has now confirmed the Major indices’, but has now failed. With the lowest close in 14 weeks, this is a significant bearish signal.

Gold remains the most crowded trade in the markets. Last weeks Bear flag failure with the lower shadow, has the potential to follow through into the retest of the $1610.90 level. The Primary UP trend remains in place with $1517 remaining as the major support level to watch on any further weakness. Relative strength has rolled lower below “70” as this price consolidation takes place around the $1560.00. Although not a bearish signal this should be monitored to remain above the 50 level. 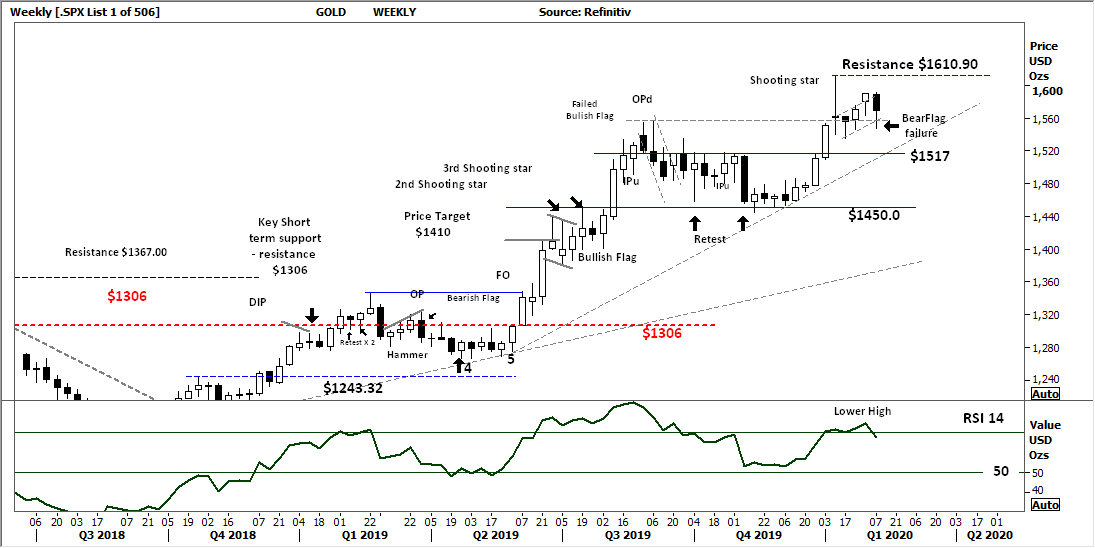 The Daily chart again shows the “over lapping” price action as a potential bearish price structure. Should a breakdown in price occur below $1540, it place’s the next target of $1517.00 in play. This type of consolidation can last many weeks before a breakout takes place. RSI continues to trend lower showing a loss of momentum within this consolidation phase and remains divergent in structure. 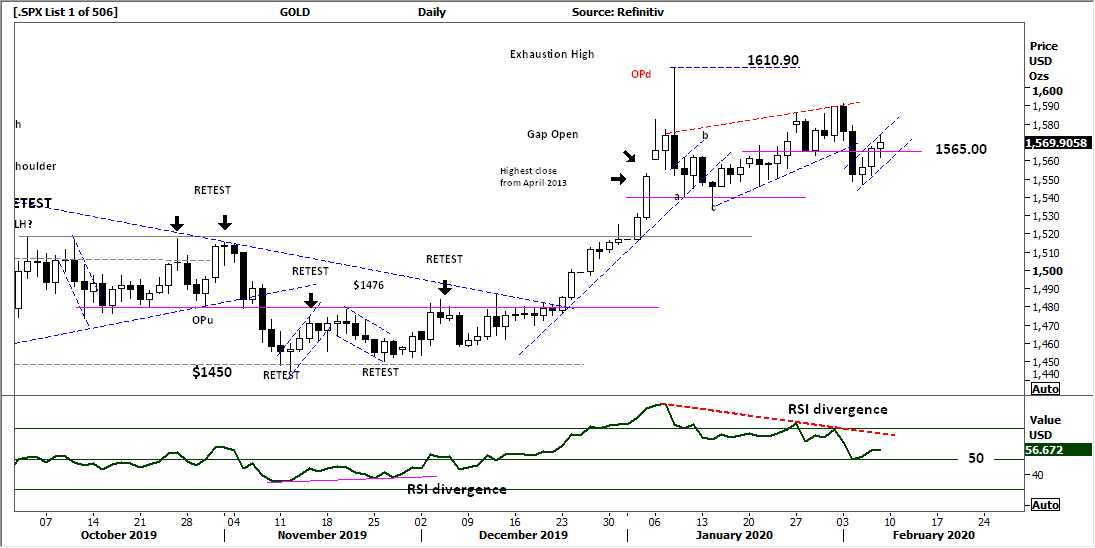 The Daily picture of Gold shows the potential Bear Flag pattern developing as the Daily ranges “overlap” each other the market can only be described as a secondary movement in price. A short term break down would see $1540 retested

The daily chart of Silver has remained in consolidation with $17.76 remaining the key support – resistance level as Fridays “inside period” shows indecision. Relative strength has “flattened” at the 50 level, with the potential for an upswing look for a breakout over $18.00 as the next key level. 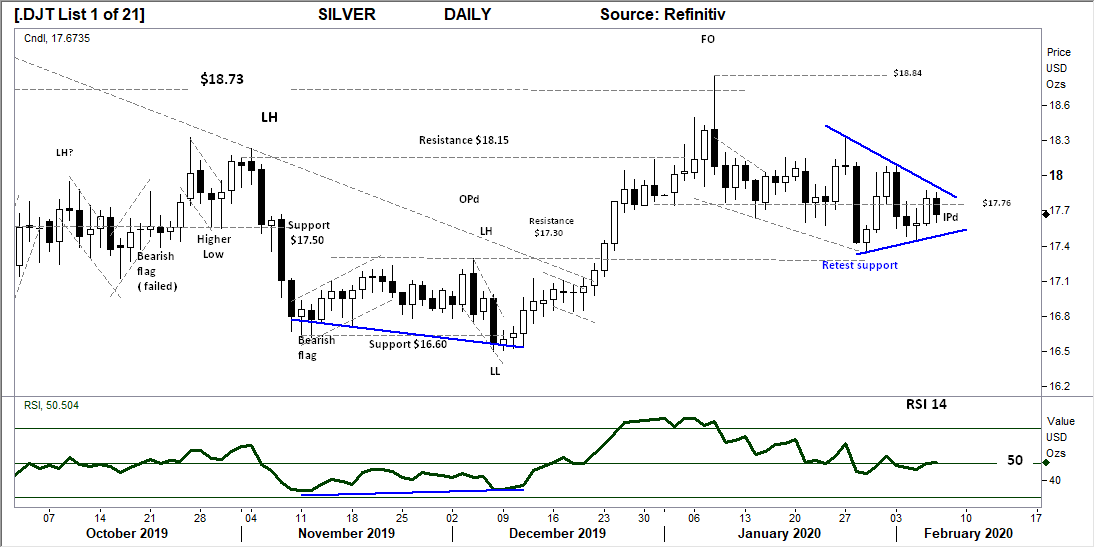 A strong support level had developed at $17.76. The breakdown on Tuesday has seen a retest of $17.30 support, with immediate recovery back into the high of the current trading range. This is very Bullish for the week ahead. Traders would look for a retest of $18.84 level.

Current volatility levels, show a significant decrease in forward volatility values, this is a Bullish sign the market has decreased immediate near term risk to valuations. This is expected to move lower in the coming weeks. The XVI is the difference of 1 month forward pricing of ETO Options against current month. As markets anticipate events, the forward priced option volatility changes, hence as forward price changes, this “skew” in pricing is measured in this XVI. The XVI value works as an inverse observation to the underlying market. An XVI over “13” is generally bearish for equities. 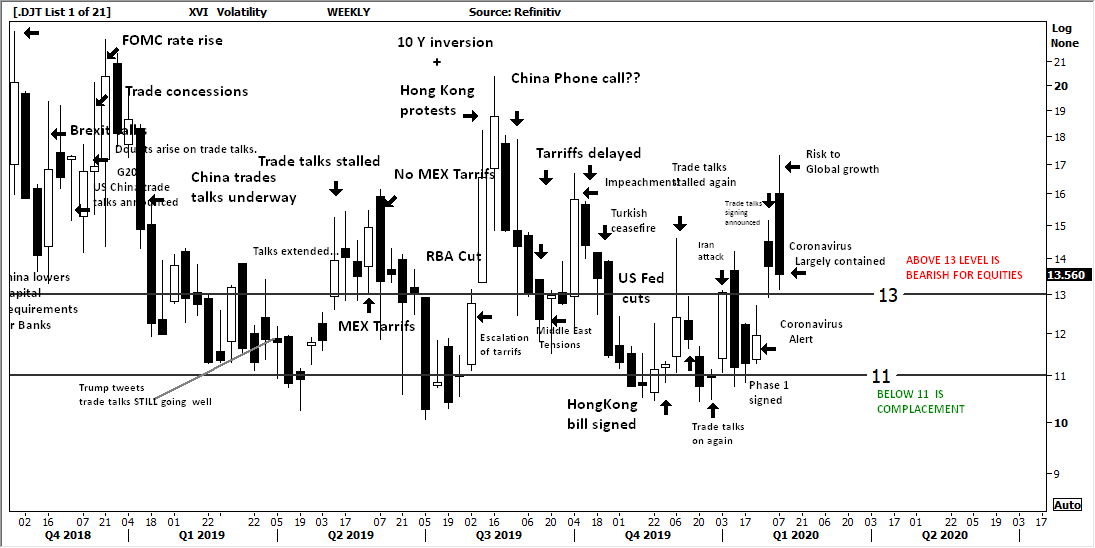 The completed “pipe” reversal on Monday has set the price movement higher with the very Bullish breakout over 98.45 resistance taking place. In the short term a retest of this key level will give an insight into the strength of the breakout. The USD Index has entered a Primary UP Trend. Relative strength continues to move higher inline with the current strong momentum. 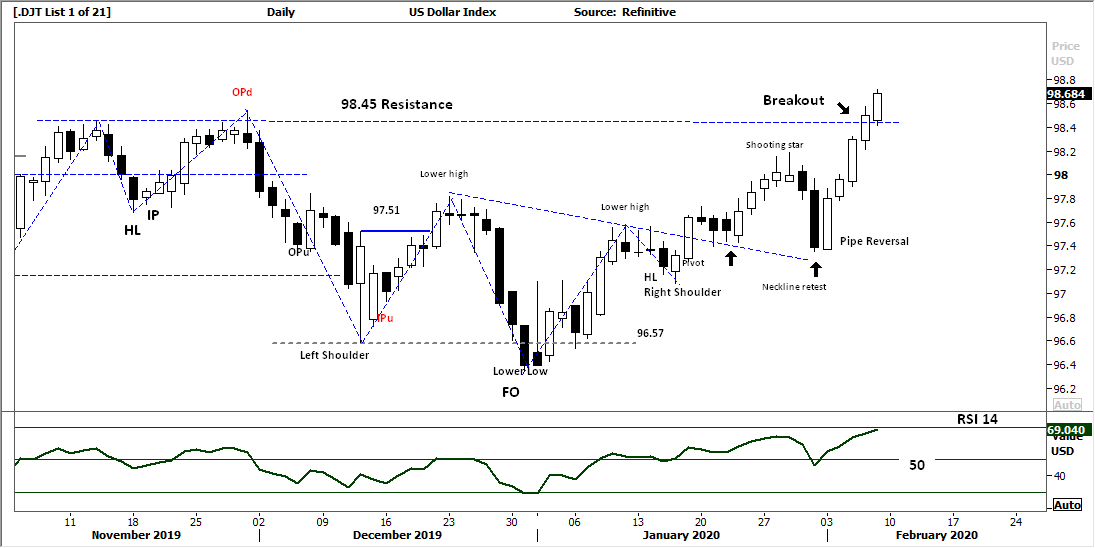 Friday’s large range and 2nd retest of the neckline is a bearish signal for further declines. 96.57 remains the downside target. A breakdown below neckline level around  97.20  would be a bearish signal in the coming weeks.

With a short range week at the key support level of $50.60, suggests support at this level. The Relative strength Indicator has slowed below the 30 level indicating a degree of exhaustion of momentum.
With a further close below this level, the $42 historical support will come into play. 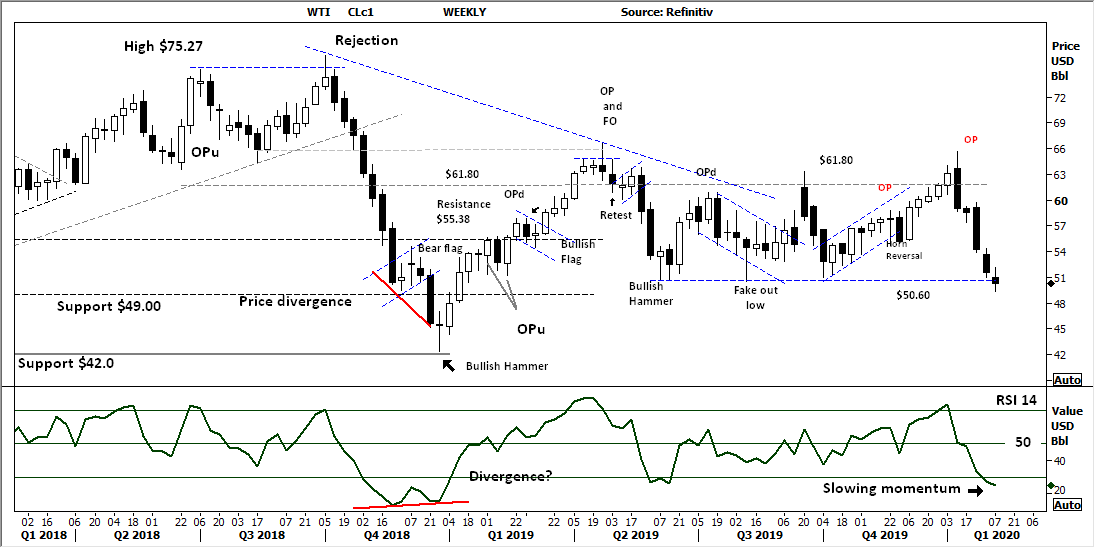 This weeks continuing follow on from the OP of 3 weeks ago is a significant bearish signal for further declines. At this point WTI remains in consolidation between $50.60 and $61.80, a break below the $50.60 level would target $42.00 historical support.