From potential breakdown to breakout describes last week’s price action. This seasonally bullish July period may just be getting underway.

Daily and Weekly breakouts have occurred from the recent price consolidation.

Across the board price weakness within the Financials and Resources would be required to achieve lower Index levels, and traders should monitor the leading components of the Index looking for strength or weakness.

Small resources are putting in high volatility gains and losses as the hype around Gold and Silver continues.

Many individual equities have far outperformed the Metals, Gold +36% and Silver +20% , for example over the past 12 month period Apple AAPL has put in a +100% gain along with Amazon +65% gain.

I have been selective in my examples, but remember, traders need to be selective in their application of funds.\ 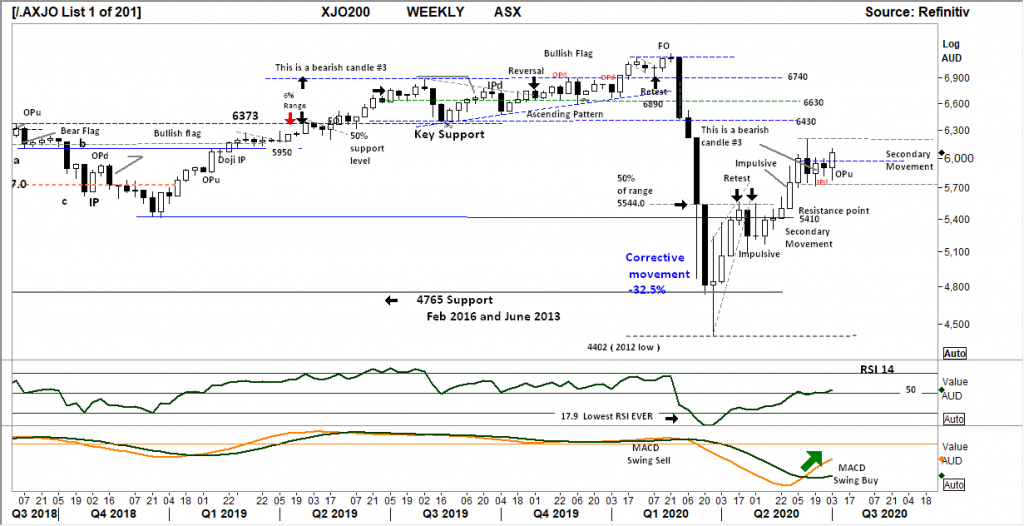 Comments from last week: The XJO Index has again entered into a consolidation phase above 5700 and below 6200. Last week IPd ( inside period, down close ) sits under the closing high (5998) from the 1st week of June. The #3 candle, a bar with a high body in the overall range, a sign of future short term weakness, is playing out.  However the underlying primary trend remains UP and this should not be discounted.

XJO DAILY
Price structure:
The breakout of the small descending pattern sets up the retest of 6300 points. The daily underlying trend remains UP.
Last Thursday’s expanded range is a bullish signal, although Friday’s range was smaller, this may have been a result of that evenings US markets being closed.
To remain a bullish picture a Daily close over 6198 is required.

Indicator:  Relative Strength
RSI has moved back to the 50 level showing balance in momentum, the move higher is the signal for increasing positive momentum.

Indicator:  VOLUME
Daily volumes remain mixed with a slight increase in Thursday’s positive close, this should be monitored for a directional bias.
Should the market move lower an increase in volume would signal distribution. A price breakout higher above the descending pattern line should also be accompanied by an increase in volume, this will be telling in the coming days.
During June there is an overall general decline on trading volumes, not the sign of a Bull market. 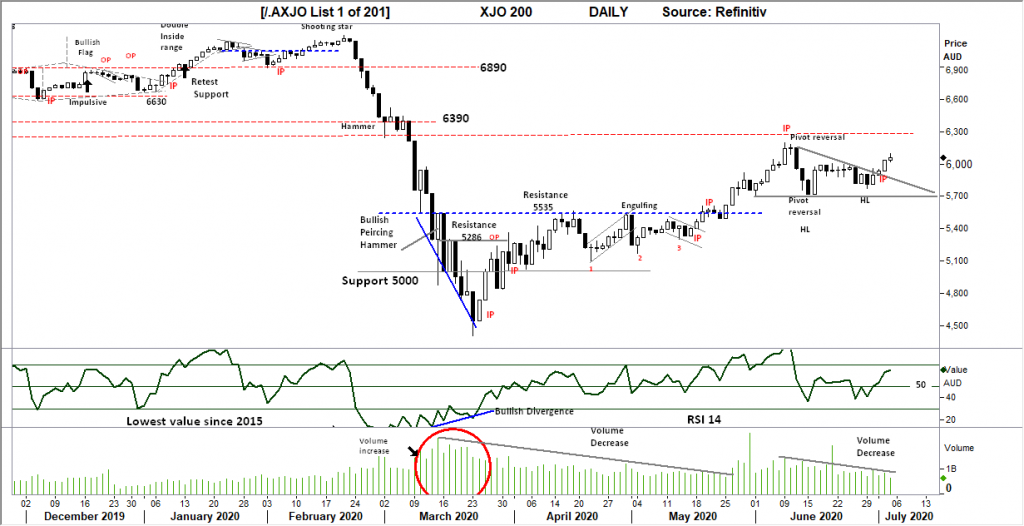 Comments from last week: A developing descending pattern remains incomplete with 2 lows ( support ) identified has the potential to break lower, with 5708 the key level.

S&P 500 WEEKLY
Price structure:
The completion of a 3 Bar triangle 2 weeks ago has confirmed itself as bullish with the price closing in the high part of the range last week and above the mid-point.

The weekly range also an outside period or outside range. A weekly close over 3235 will continue to put the Gap into play at 3260. This would be area to look for rejection in the daily chart. 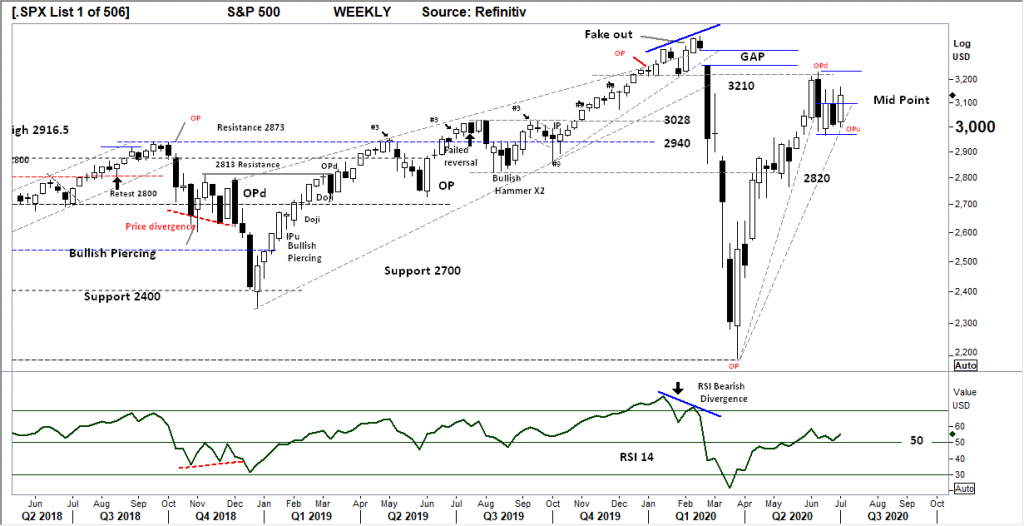 Comments from last week: The second week of “mid-point” rejection, with last week also an inside period, sets up a retest of 2940 and potentially lower at 2820. The underlying Primary trend remains UP, however this is a very strong signal a reversal top is now in place.

S&P 500 DAILY
Price structure:
The Daily price structure has moved out of the Bullish flag pattern to retest its high at 3154.
The final bar shows as a fake out (FO) closing inside 3154. There remains 20 points from Thursday’s high to close the “Island top” Gap.
The closing of the Gap will be the inflection level for potential reversal.
A further close over 3233 would be very Bullish for further gains.
The breakdown level for a reversal to gain weight would be Thursday’s low at 3124. 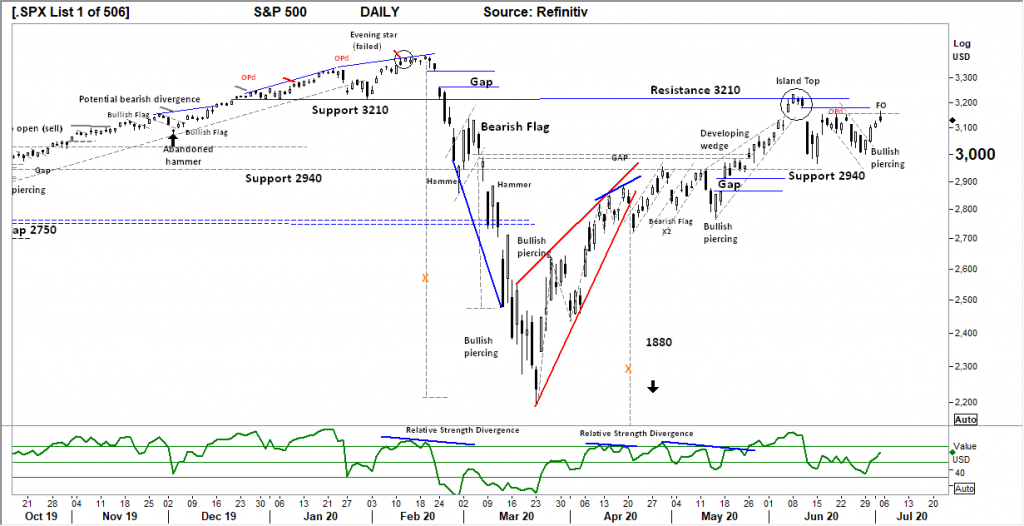 Comments from last week:  The current developing “flag” pattern has the potential to breakout higher, (see RSI note) This type of flag pattern has a high percentage failure rate, the potential is to test lower level as the “island top” remains the key resistance area. The price GAP at the 2940 level seems the better target, this area would then be monitored for a reversal higher.

The whole world wants to be “long” Gold.

The shorter breakout range of $37, 2 weeks ago is again followed by a shorter weekly range of $32.16 setting up a consolidation signal (ranges getting shorter) as momentum slows.

The weekly low retesting the breakout and the close in Mid range is not a bullish signal for further immediate gains. 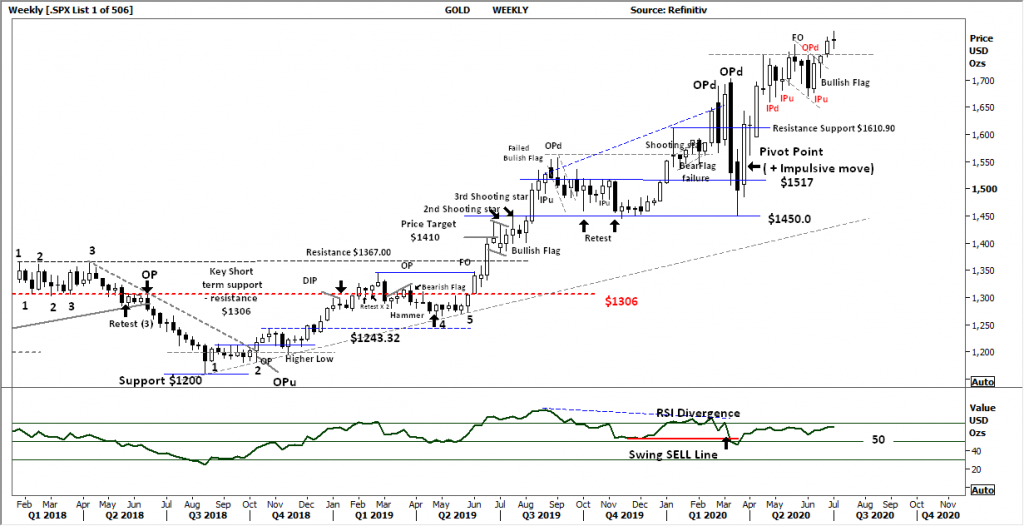 Comments from last week: On a breakout the Trader should be cognisant for a potential “Bull trap” scenario. The current breakout could be expected to show further gains in the coming week. Traders should be aware the breakout range is shorter than the consolidation ranges, showing lack of commitment by the buyers. Historically breakout can come back to test the original breakout level, in this case $1747.0. The breakout during Q3 2019 a case in point.

AUD GOLD DAILY
Price structure:
The Daily Australian dollar Gold price put in an OPd on Wednesday, a warning signal that a short term / long term top may be in. The chart has other OPd’s marked. The rising wedge pattern has broken to the lower side with $2380 as the bigger target.
Australian dollar strength is the key to this chart, as the AUD moves higher AUD Gold value moves lower only offset by the USD Gold price.

Indicator:  Relative Strength
With the RSI now rising, the crossover of the 50 level is a good sign upward momentum may continue in the short term. However Traders should monitor this level for further weakness. 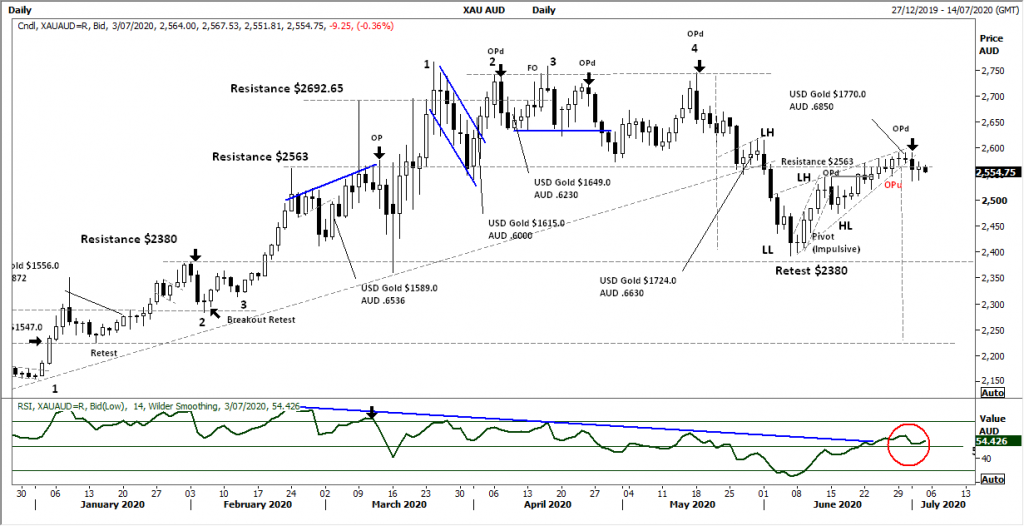 Comments from last week: Friday’s OPu is a sign a short-term top may be in place, only an immediate continued move higher would negate this view.  Key level for the coming week will be $2563 as a major support level. The Daily trend is UP.

SILVER DAILY
Price structure: Silver is an Industrial metal and will be responsive to improving economic news.
Gold makes a new high, silver does not make a new high.
The daily chart of Silver shows the completed 3 Bar triangle, in this case a bearish pattern as current last bar is in the low part of the 2 prior bars range.
The simple “tentative” trend line would be monitored for a breakdown from this level. Silver is developing a large consolidation zone below $18.40 resistance and $17.00 suport. 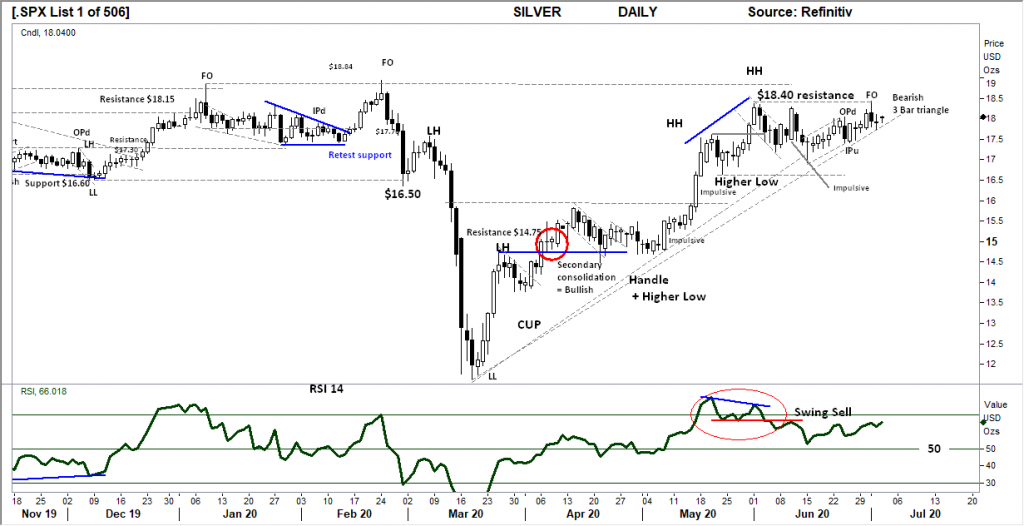 Comments from last week: The OPd has the potential to set a short term top in place with $18.00 becoming intra day resistance, with further significant resistance at $18.40. Further consolidation could be expected below these levels with $16.50 remaining a major support level.

AUSTRALIAN VOLATILITY INDEX
Last week the XVI volatility index 18.32, has shown a decisive move lower, this remains Bullish for equities as forward volatility prices fall.
An XVI over “13” is generally bearish for equities. However this current decline is a move in the right direction.
The XVI is the difference of 1 month forward pricing of ETO Options against current month.
As markets anticipate events, the forward priced option volatility changes, hence as forward price changes, this “skew” in pricing is measured in this XVI.
The XVI value works as an inverse observation to the underlying market. 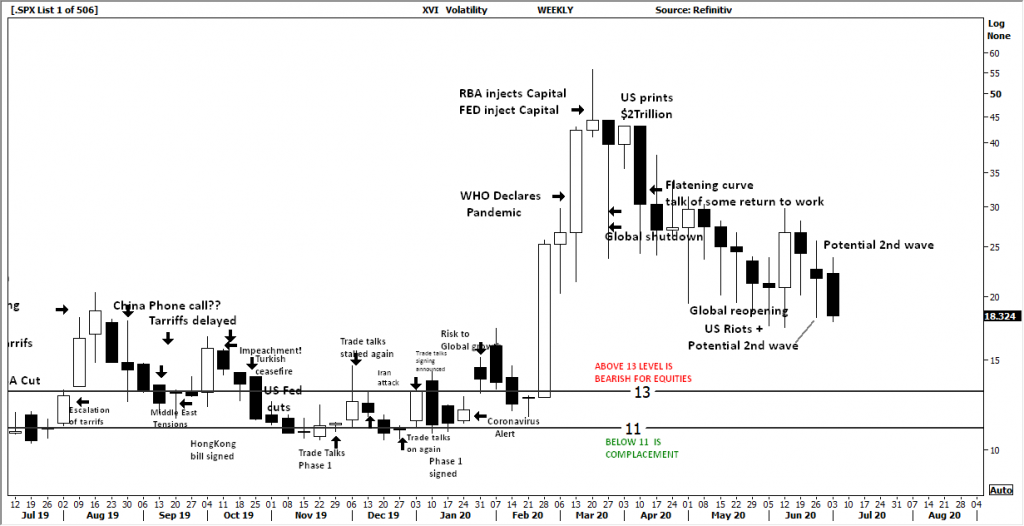 USD DOLLAR INDEX
Price structure:
Consolidation between 97.75 and 96.40.
Wednesday’s hammer requires follow immediate follow through to suggest a breakout.
The RSI showing benign movement is not a great signal for a breakout.
However “low volatility leads to high volatility” is a market truism to be aware of.

Indicator:  Relative strength
RSI shows a flattening move, below the “50” level, not a sign of strong momentum. 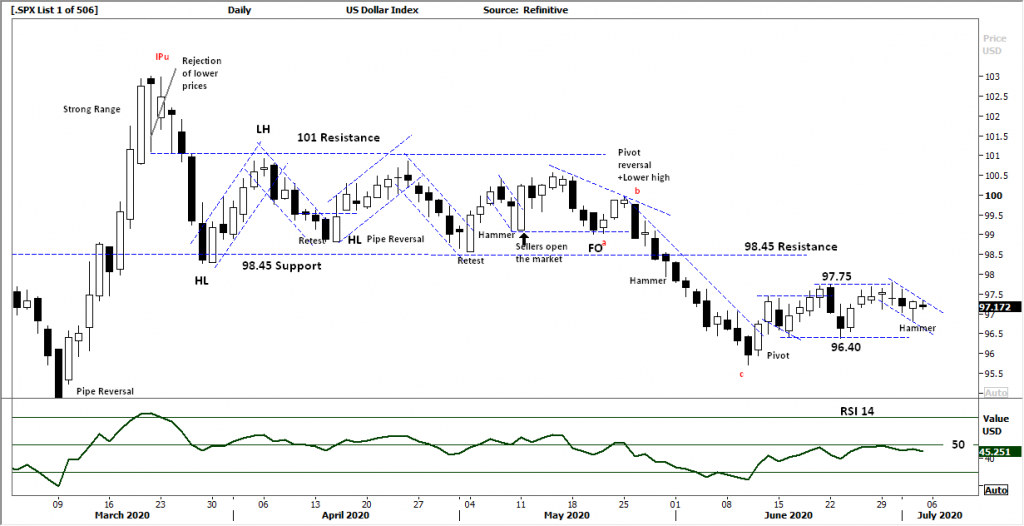 Comments from last week:  A developing consolidation period as the DXY trades within the 96.40 – 97.75 range. With the low close within the range on Friday a move lower would be expected to test the lower support level. The key bearish level is a move below 97.00

WTI  CRUDE OIL
Price structure:  This commodity is news driven
With a very positive high close in last weeks range below the current $42 resistance level shows the Bulls pushing for higher prices.
As the week finished an “inside period” a breakout will confirm the direction.
The past 5 weeks have set up a small ascending pattern, look for a breakout over $42.00.
Overall the Primary trend remain Down.

Indicator: Relative Strength
Relative Strength has remained over the 50 level, having set a lower high point followed by last weeks push higher is a strong sign of positive momentum. 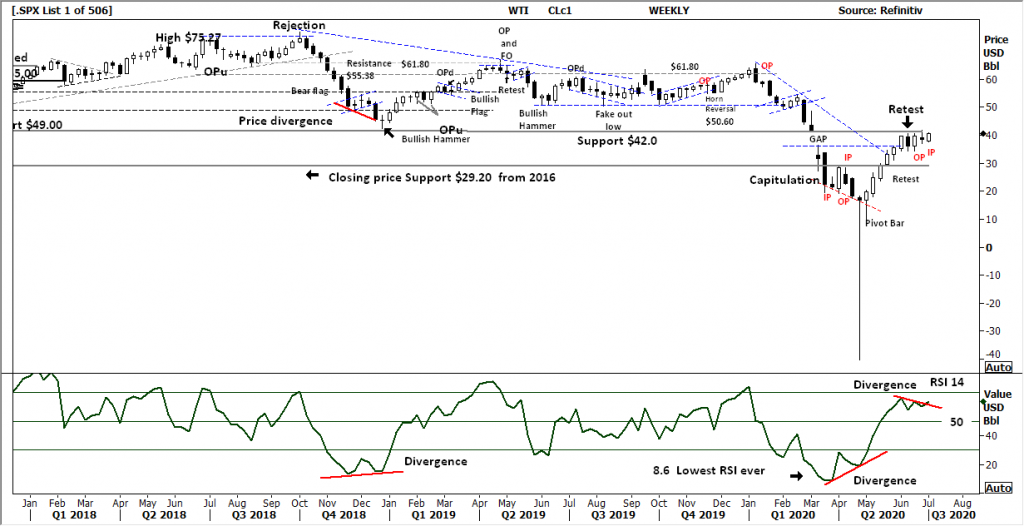 Comments from last week: The $42.0 level remains the significant resistance level to be taken out on any move higher. Consolidation below this level for an extended time would be a bearish sign for a potential retest of the 29.20 level.