Within Robert Rhea’s work on Dow’s Theory, the description of a Bear market is described as thus.  (BTW, Charles DOW did not invent technical analysis)

“A primary bear market is the long downward movement interrupted by important rallies. It is caused by economic ills and does not terminate until stock prices have thoroughly discounted the worst that is apt to occur. There are three principle phases of a bear market: the first represents the abandonment of hopes upon which stocks were purchased at inflated prices; the second reflects selling due to decreased business and earnings, and the third is caused by distress selling of sound securities, regardless of their value, by those who must find a cash market for at least a portion of their assets.”

Last week markets have interrupted the recent decline by an important rally.

Price structure
The Weekly chart of the XJO has now started to develop the secondary phase following the “corrective movement” The price chart now shows resistance at the 5410, this important consolidation shows 4765 as the current closing price support level.

In this coming week further price consolidation would be expected below 5410 resistance.

Last week’s closing price well off the high shows the buyers unable to close the market, with selling entering with over 50% of the range lost. This is a bearish signal for further declines.

Indicator: Relative strength
The relative strength Indicator (14) has turned higher from below the “30” level showing a change of momentum, this will be monitored in the coming weeks for a Bullish divergence signal.

Indicator: MACD
The MACD has been slow to react to the initial corrective price movement, and currently remains a “Sell” signal. 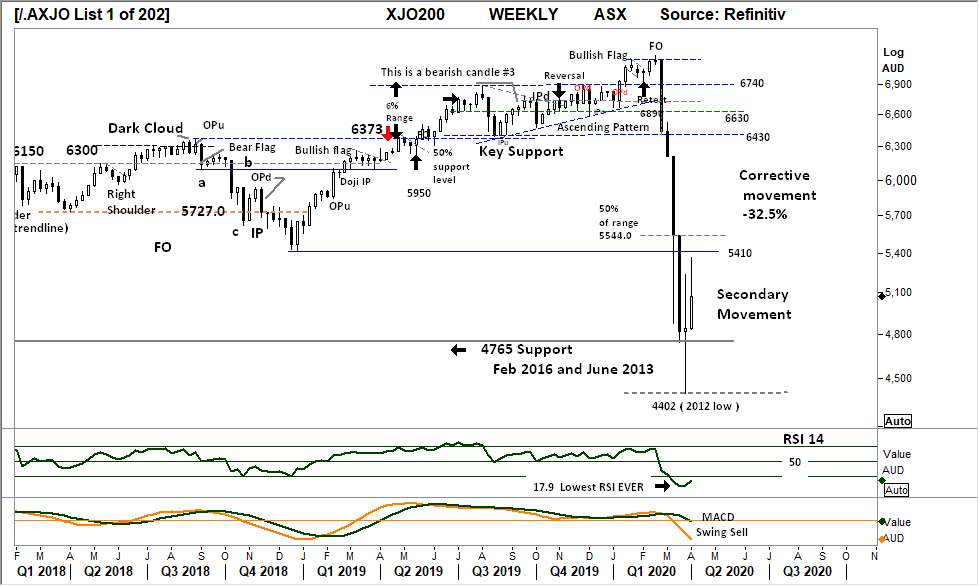 Comments from last week: Last weeks large range with the open close within points of each other indicates confusion between the Buyers and Sellers. With historical 4765 remaining as support this level will be defended by the bullish in the coming week. Relative Strength Indicator (14) turning sideways only indicates this slowing downside momentum.

Price structure
The Daily view of the XJO the bearish flag development with closing price resistance at 5286.

The Volume study contains vital clues, Volume declines on price rallies and Volume increase on price declines, this classic bear market activity shows the potential for further declines in the coming days. Importantly the “OP” six bars back has marked the high within 3 bars.  (Krastins research )

Indicator:  Relative Strength
The Bullish divergence signal is now complete and finished as the indicator has crossed the “50” level and has rolled lower again. A bullish signal would only develop with a further movement over the 50 level. 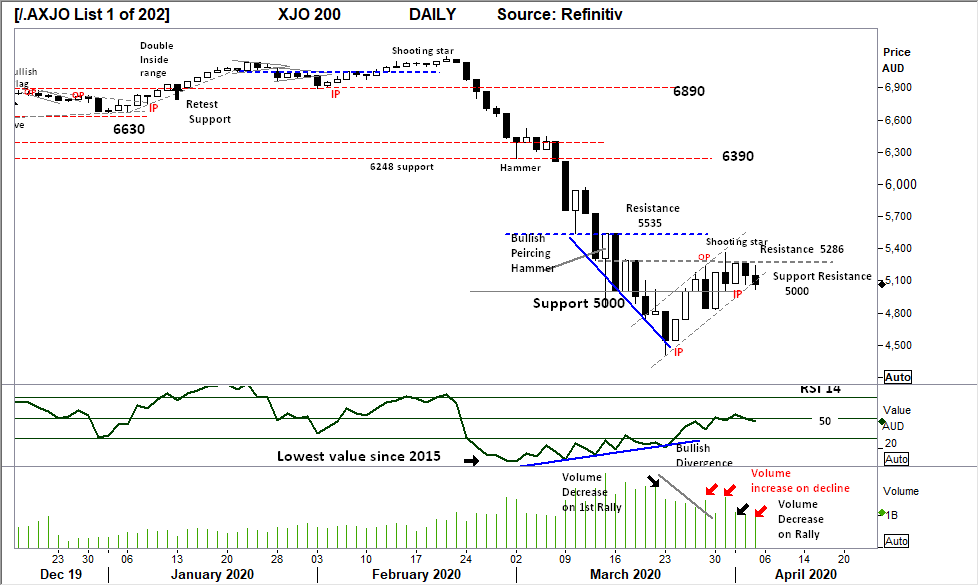 Comments from last week
: The past weeks rising price on falling volume with Friday’s outside period (OP) on strong volume suggest the market is selling into strength. This is typical BEAR MARKET activity and should be monitored in the coming week. A retest of the low 4402 in the coming days, Daily resistance shown at 5000 and 5286 is significant.

Price structure
A Secondary market is developing in this Index.

Following the outside range of 2 weeks ago last week’s small range bar shows lack of control by the Buyers with w closing price towards the low of the range.

The first Important support is the 2400 level.
A further breakdown below 2400 and 2280 would signal the Sellers in control and set the market on course for a break of the “tentative” trend line. This market would only then enter a Primary bear market down trend from this current corrective price movement.

This indicator will be monitored for a bullish divergence signal, however this may take several weeks to develop 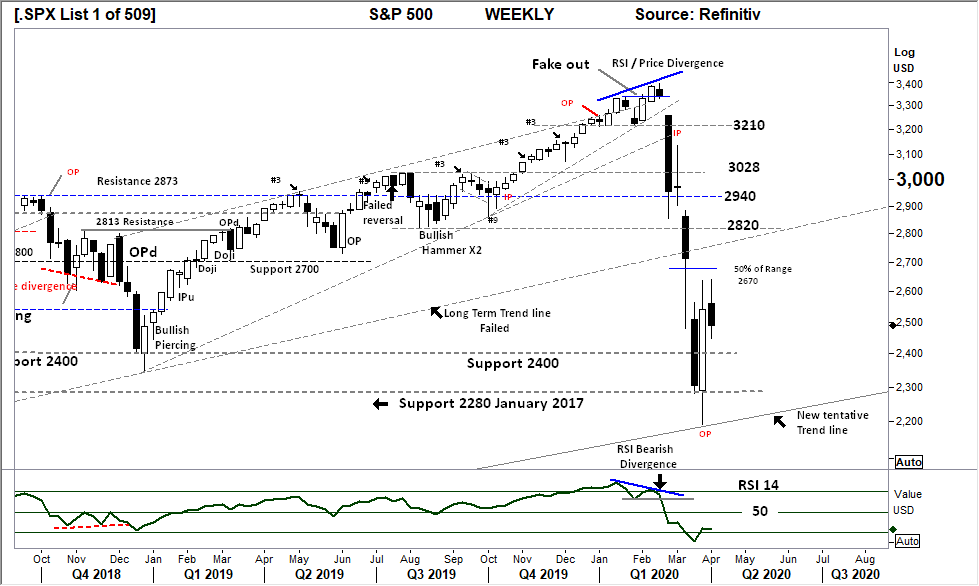 Comments from last week: With a very large outside range (OP) closing within the historical support level of 2400, shows very strong and defensive buying. Statistically the OP is a very strong marker of market turning points ( within 3 bars, 94%). Look for continued support above 2400 in the coming week, this is NOT a new Bull market, but a bear market rally.

Price structure
The Daily chart of the S&P 500 shows the intraday resistance level of 2650 developing. With price consolidation around the 2500 level a breakdown below this level would incite further selling into the already established daily down trend.
Last Friday’s down close bar has the potential to follow through into lower values with 2300 being the key level for traders to monitor in the coming days.

Indicator: Relative strength
The Swing Buy signal has now completed as the indicator swings back below the 50 level signalling a loss of upward momentum. 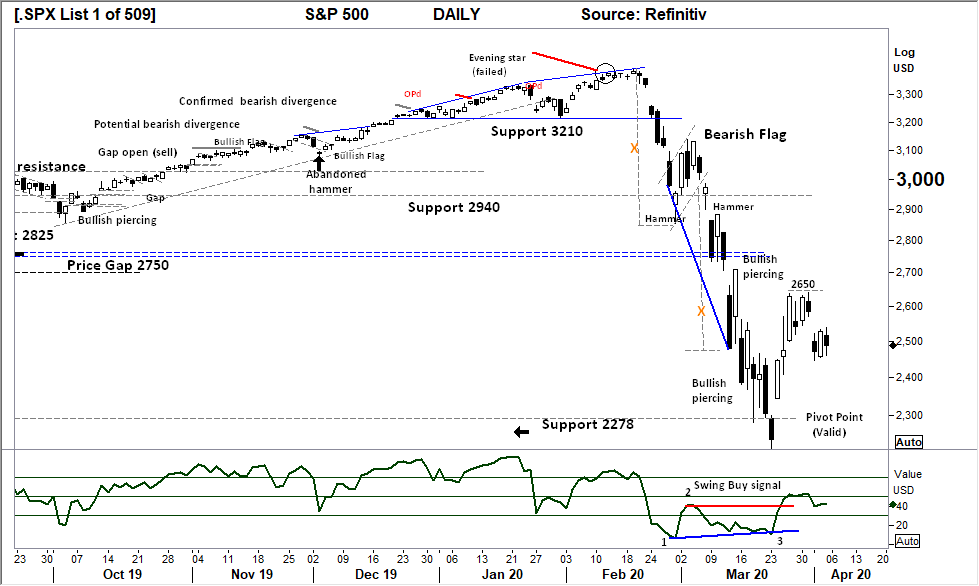 Comments from last week:  In this daily time frame the Relative strength has provided a swing “Buy” signal following the recent pivot point. All against the prevailing downward price movement. Significant resistance remains at the 2750 level. Last Friday’s inside period (IPd) shows the market in balance, a directional move will give a strong indication of underlying market sentiment. With uncertainty in the fundamentals backing the Index, a potential move lower carries the highest probability.

Price structure
The Weekly range shows a lower shadow with the close of the range remaining above the key $1610.90 level. The weekly Inside period (IPd) is showing the market in balance above this key level.

The underlying Primary trend remains UP. Trader would look for a potential retest off the $1702 recent high.

Indicator:  Relative Strength
Last 2 weeks saw the Relative strength indicator swing higher, however in line with not real price movement over the past week the RSI has turned flat, and importantly remains over the key “50” level. 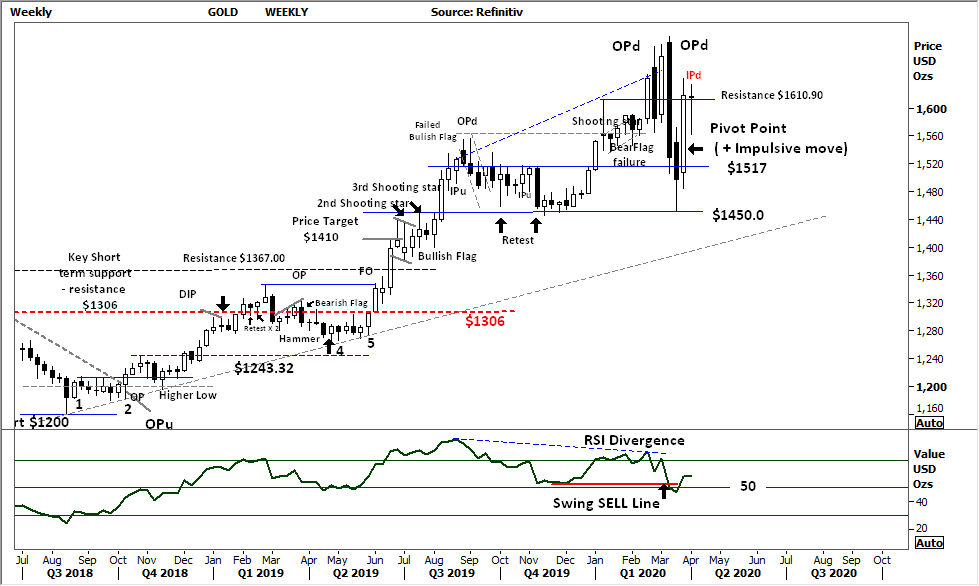 Comments from last week: The Weekly chart of Gold shows a significant Pivot point in place. As the range is “large” compared to the previous week, the week’s movement is regarded as impulsive. Of significance is the close above the $1610.90 level, a win for the bulls in this Primary UP trend.

Price structure
The price breakdown from the “Continuation Pennant” has quickly reversed to retest the $1631 level. This level will be key in the coming week. The “higher low” is a strong sign of continuation of this Primary UP trend.

Last Friday’s short range bar has the potential to set up further consolidation below this level.

Indicator:  Relative strength
A sign of overall positive momentum when the RSI remains above the 50 level. This should be monitored in the coming days for a sign of weakness should the 50 level be breached. A rising indicator would show improving price momentum. 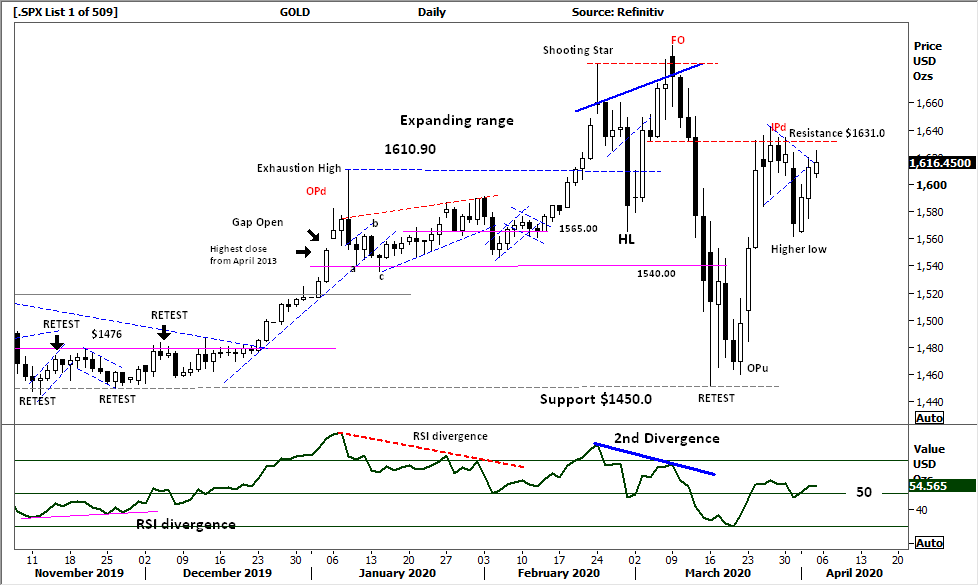 Price structure
The daily chart of Silver may have finally turned the downside momentum corner as the initial price failure from the continuation Pennant has reversed to again test $14.50.

Traders would notice the price rally is now “covering” the large downward movement from mid March.

Indicator: Relative Strength
The Relative Strength has turned higher, however remains below the 50 level. This should be monitored in the coming days for a move higher in-line with further Bullish price movements. 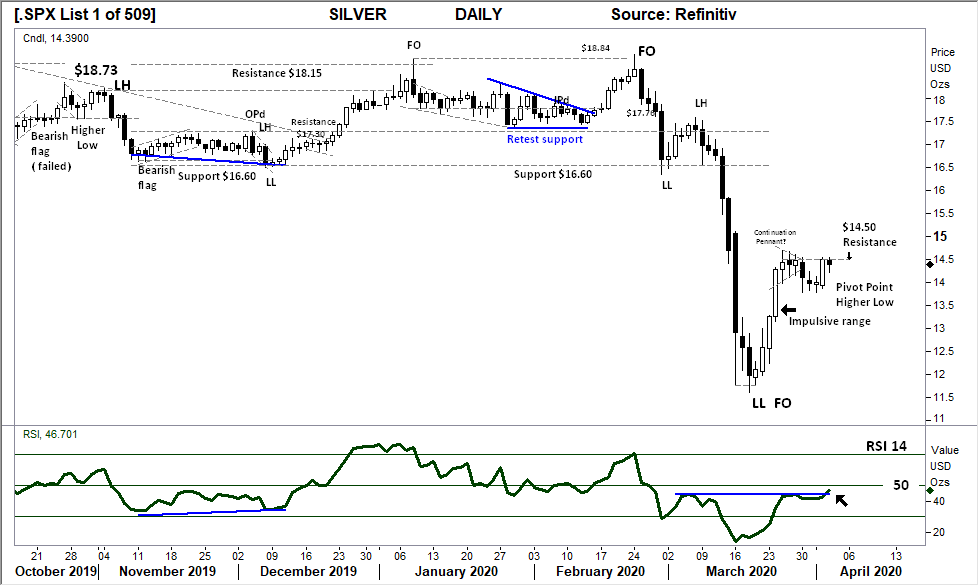 Comments from last week: Silver remains in a Primary down trend, the current continuation pennant.(?) Requires a closing price breakout higher over Wednesday’s $14.70 high to confirm a retest of $16.60 is underway. Price failure below the current pennant formation would be a significant bearish signal within the current down trend.

AUSTRALIAN VOLATILITY INDEX
Current volatility levels, remain the 2nd highest since the GFC and again shows a Strong move from the inter week lows, this is a Bearish sign for equities as the market has again increased immediate near term risk to valuations and priced in higher premiums within the options markets. This may again move higher in the coming weeks. 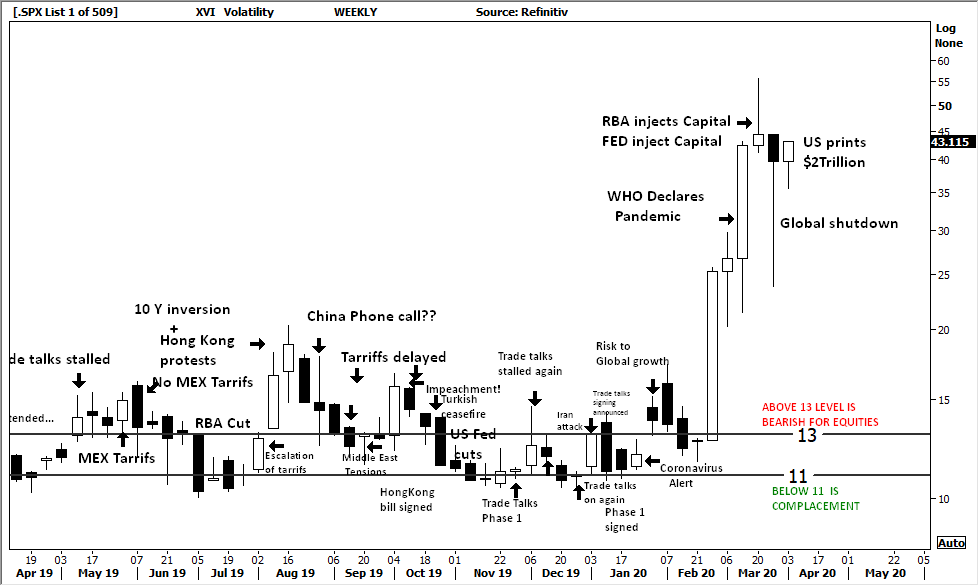 Price structure
The Daily chart shows immediate support at the 98.45 level with a small price rally. The daily price bars remain “overlapping” each other and remains a weak signal of further price gains. As the final bar remains a short range, momentum may be waning to the upside. A further retest of the 98.45 support would be the favoured move in the coming days. 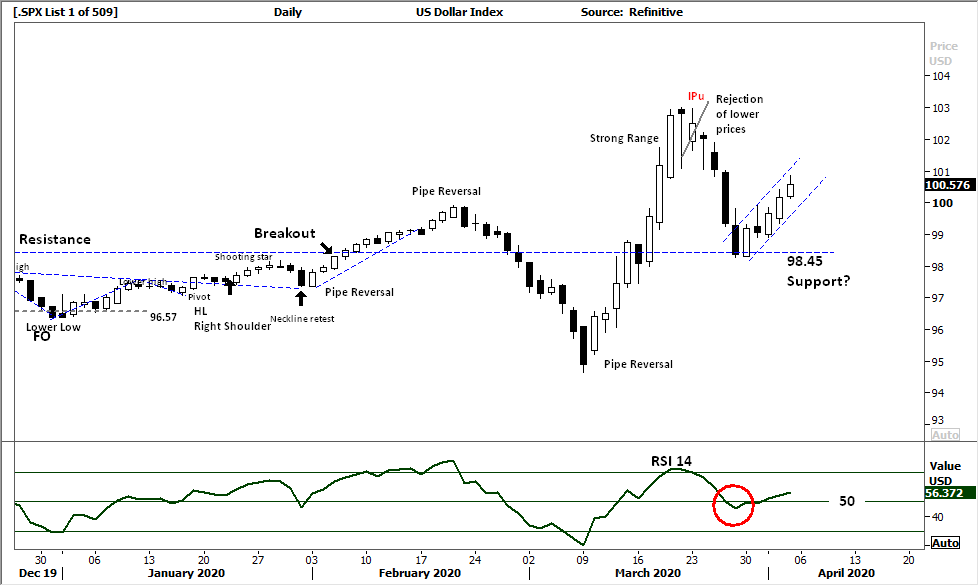 Comments from last week:   Rejection at 103, Last Monday the inside period (IPu) began the balance point. With the current retest of 98.45 historical resistance / support level underway, a further closing price below this level will potentially bring in the lower support level of 96.57 and a retest of the “95” level into focus. The downward price movement is a Primary movement and may show a full correction movement to the early March 2020 lows.

WTI posts an “outside period” (OP) a strong signal the low is in.
The underlying primary trend for WTI is down, this reversal to test the $29.20 support / resistance level requires a follow through week to remain bullish.
Should a daily close over this important level take place a further price target of resistance at $42.00 would be in play.
Failure to close over the $29.20 only indicates consolidation below resistance, a bearish signal for a retest of the lows.

Indicator: Relative Strength
Relative Strength sharply rising from its lowest level (ever) is the first signal of increasing upside momentum, this should be monitored for a mover higher towards the 50 level to remain bullish in the short term. 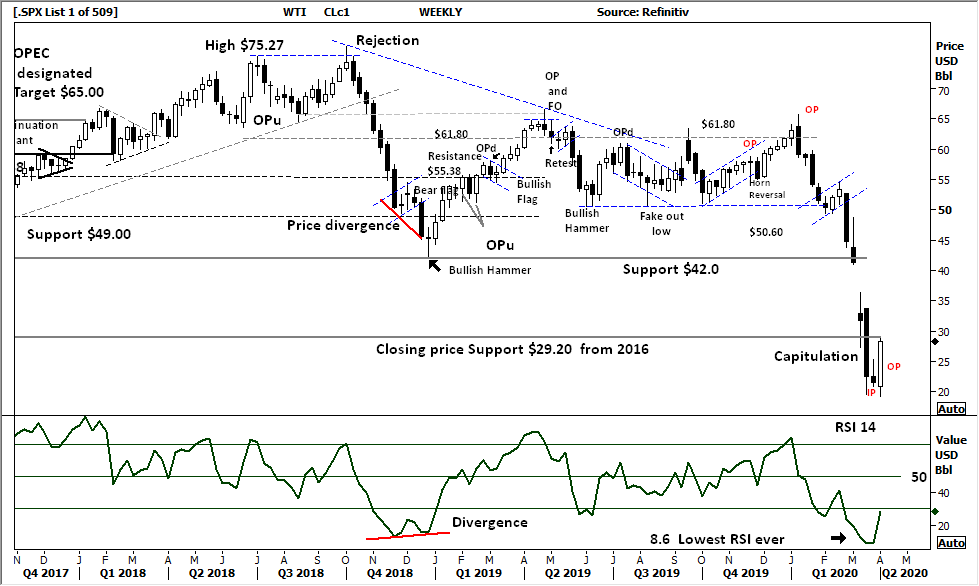 Comments from last week:  Consolidation above $20.00 is the best potential outcome as last week’s Inside period (IP) shows balance between the buyers and sellers. The underlying price move remains “corrective”. Price resistance at the past support level of $29.20 will come into play on any short term bullish movement.