Yield curve control, the markets are moving (lower) in sympathy with increasing yields, the USD Index has made a decisive move higher bringing pressure onto major currencies. The $AUD losing 3 cents over 48 hours late in the week.

This week’s price charts show the stark underlying correlation between markets from equities to commodities.

Last week saw one of the highest volume trading days as the market moved lower.

Gold and Silver not making the move higher, although anticipated by many.

Expect a week of volatility with the potential for further declines to test support levels and trend lines.

Although potentially in the very early stages of a more intense market decline, there is a significant amount of price discovery to come before these claims can be made.

Currently the short term trend line is being tested on increasing volumes and declining positive momentum.

The breakoff short term support at 6737 with price closing in the low portion of the bar is the first signal of impending weakness.

A bearish divergence has developed within this momentum indicator and is now confirmed with a move below the previous low reading. 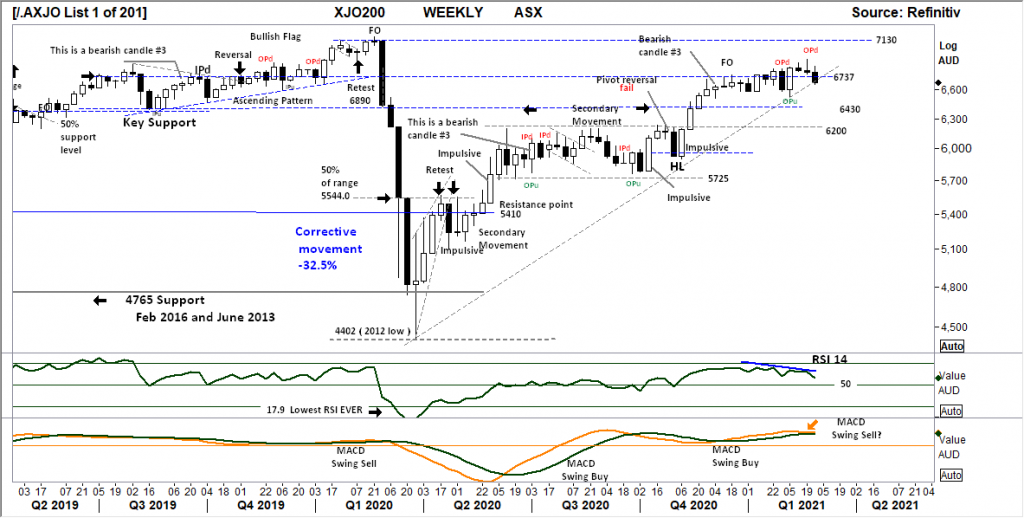 Comments from last week: The market remains in a consolidation phase until a breakout.

Daily support at 6765 has been decisively broken with a large range bar. The next and key support level shown at 6510 will determine the underlying health of the market.

This will provide mixed results in equities with sector performance the key focus.

Indicator:  Relative Strength
With RSI making a series of lower highs recently and now tracking below the 50 level, setting a bearish momentum signal, a cautionary view of higher market momentum should continue to be held.

Indicator:  VOLUME
High Volumes in this small pattern indicate an increase of selling, this indicator should now be monitored for declining volumes to signal a loss of selling momentum. 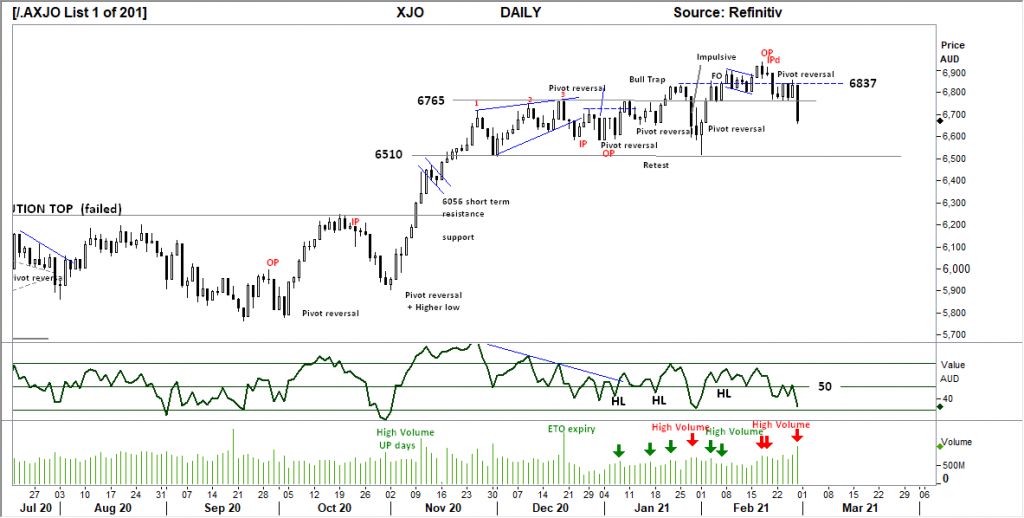 Comments from last week:  Further high price rejection from the Outside period (OP) set last Wednesday has seen an accelerating price move lower towards 6765 support, this will the key daily price level to hold in the coming week.

Pivot point reversal towards first support at 3725 with e lower support at 3600 pivotal in holding positive market sentiment. The Outside period (OPd) of 2 weeks ago playing out into lower prices on an expanded range bar. This is a bearish development within the current price structure. 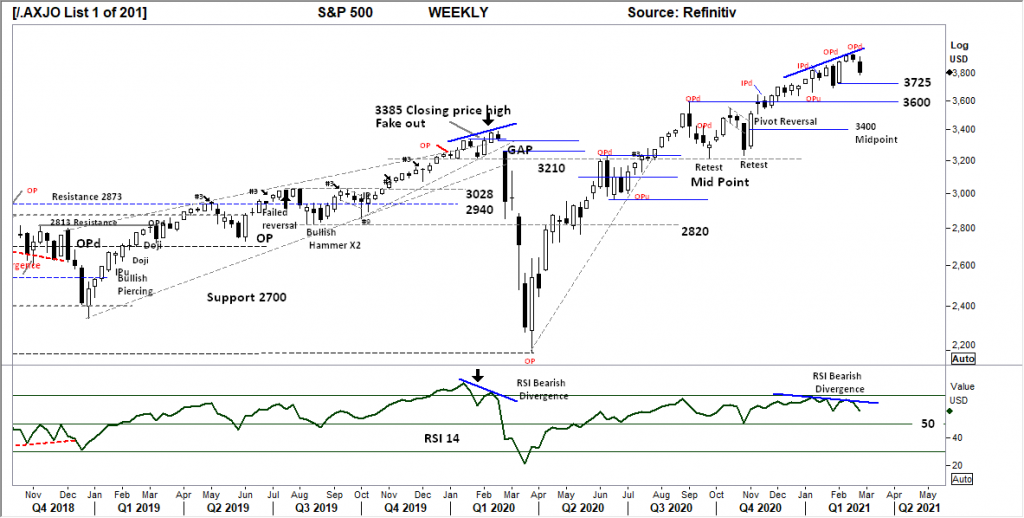 Comments from last week: A short range week, a signal of indecision, this can often lead to some form of decline as Buyers leave the market and current holders lock in profits.

S&P 500 DAILY
Price structure:
Wednesday Thursday last week have set a lower high, with Fridays retest of the 3872 before closing towards the low, suggest buyers remain in the market.

However the short term trend line has been broken leaving behind a potential support area.

A further breakdown below 3800 would signal a continuation move towards 3600.

Indicator: Relative Strength
Relative Strength short term has turned BEARISH. The RSI should be monitored for a movement and continuing close below the 50 level and further move below key 30 level as a loss of upward momentum gather pace. 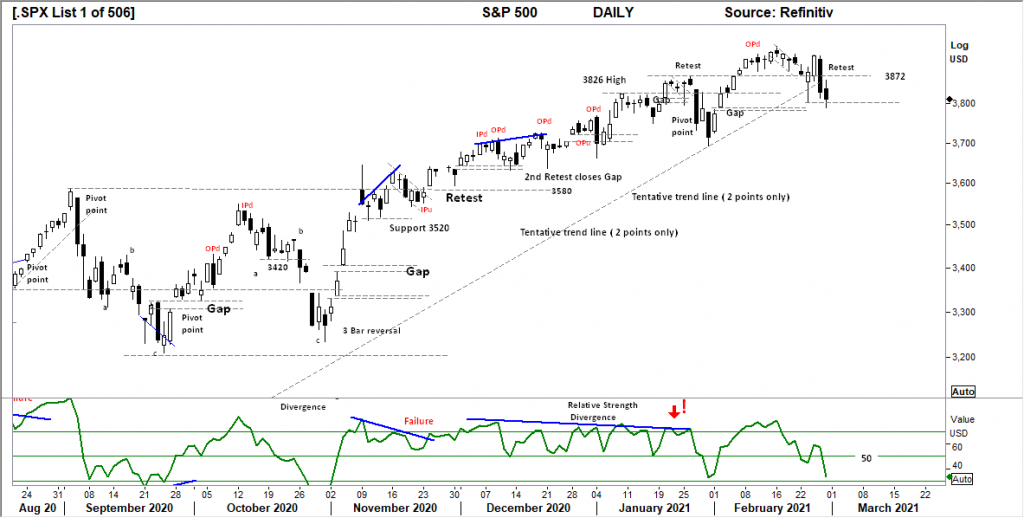 Comments from last week:  The Daily support level shown at 3872 was tested last Thursday, going forward this will be the short term level to hold in the coming days.

The retest of support from 2 weeks ago resulted in a short rally to retest the midpoint support level of $1826.00 with immediate rejection.

Current momentum suggest a retest of the Primary trend-line circa $1700.

Relative strength turns lower and fails to cross the key “50” level. This is a key indicator of “slowing” price momentum, a continued move lower would only reflect negative price momentum both in the Daily and Weekly charts. 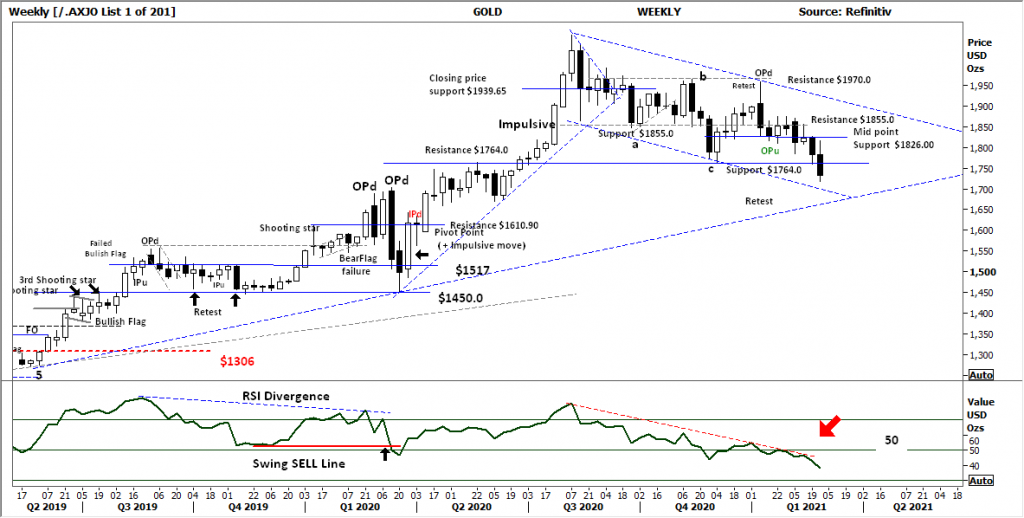 Comments from last week: A very important development in the GOLD chart is the Fake out move below the November support level $1764, (see last weeks notes below) followed by a Weekly close above this level.

Price failure at this level puts the lower trend-line target in play at $1700.

AUD GOLD DAILY
Price structure:
AUDUSD continues to consolidate below the important $2288.0 level. This price chart remains in a Primary down trend and will continue to place price pressure on local Gold producers.

There is nothing bullish in this current price structure, except the price divergence developing within the Relative Strength Indicator. A short price rally will be against the underlying down trend.

Indicator:  Relative Strength
With the RSI turning lower from below the key 30 level showing decreasing momentum.

With the indicator turning higher as price makes new closing lows, a divergence signal is developing. This may lead to a short price rally.

This momentum indicator needs a continued swing higher over the key 50 level in line with any price gains to confirm a valid buy signal. 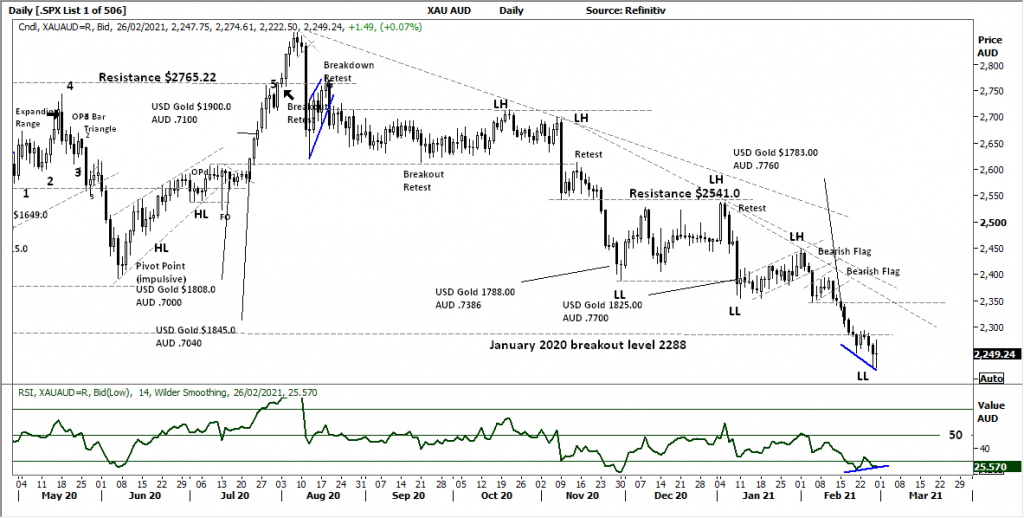 Comments from last week: The AUDUSD Gold price has placed considerable pressure on the Australian producers underlying price, with most remaining within a Primary down trend.

SILVER DAILY
Price structure:
The Daily silver chart continues to hold above the key support level of $26.00 and above the confirmed trend line. Fridays lower retest of this level with a close back towards the midpoint suggest buyers remain.
The price construction within this chart is vastly different from the Gold chart. Silver remains the stronger of the two.

The big level to hols buyer support is $26.00 a move below this level would be a very bearish move and offer traders momentum. 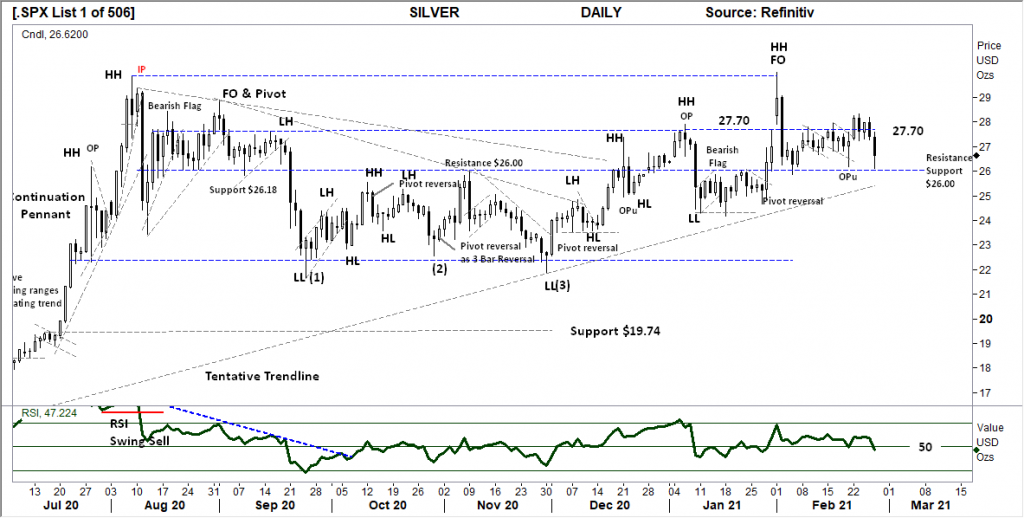 Comments from last week: Last Friday saw another retest of the $26.00 support level and again met with strong buying to lift price back towards the $27.70 resistance level.

Last Friday price resolved into a “shooting star” suggesting the market has moved to profit taking.

A further retracement could be expected to initially retest the $4.00 level. Consolidation above this level would be viewed as extremely positive.

An early BEARISH divergence signal has now confirmed. Further confirmation will show as a move below the “70” level. 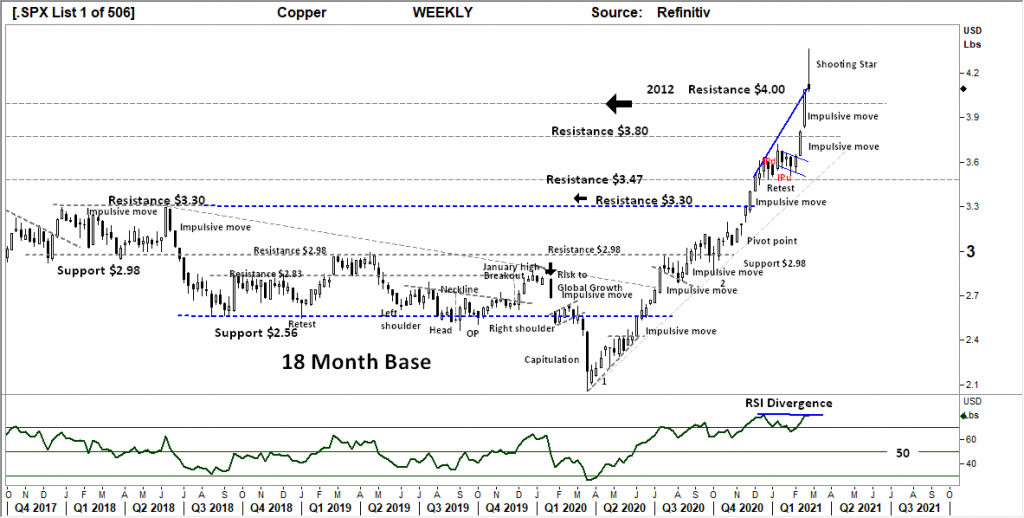 AUSTRALIAN VOLATILITY INDEX
The XVI has moved higher with market volatility, this will place pressure on equities in the coming days. 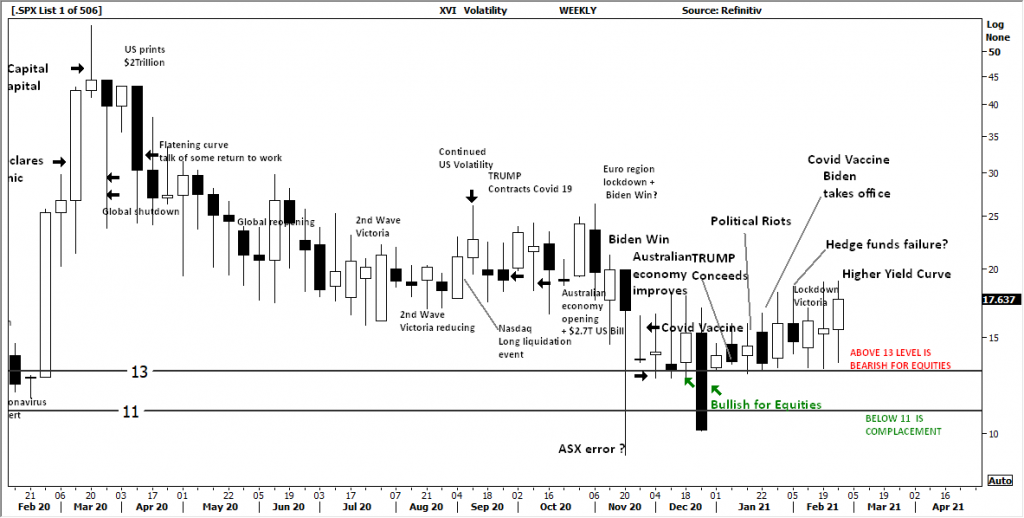 Comments from last week: The large range bar last week has given way to a lower close over the previous week. Volatility remains in equity pricing as the cost of option PUT insurance remains elevated.

USD DOLLAR INDEX
Price structure:
The most important chart in the world the USD Index has set an impulsive move higher, possibly forcing a “short cover” following the surge higher in US Bond yields.

The down trend line is currently being tested, a continued move higher in the coming week could be expected.

Indicator:  Relative Strength
While the RSI has made a sharp recovery the 50 level. Trader will look for an RSI above the 50 level to suggest a more significant momentum move higher is underway, this remains highly probable.

The December / January divergence signal is playing out. 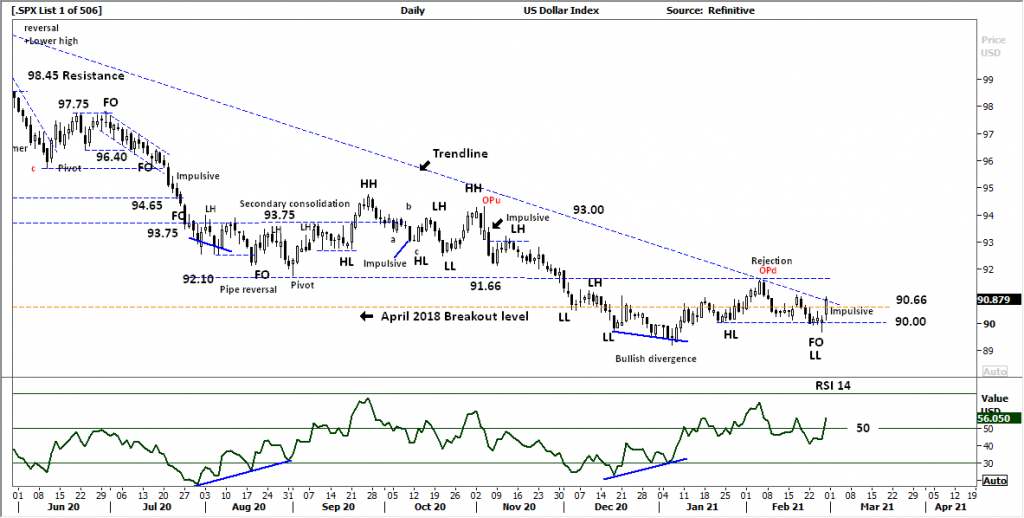 Comments from last week: Building support along the 90.00 level is a strong signal the Buyers are accumulating.

WTI CRUDE OIL
Price structure:  This commodity is news driven by supply -demand.
Two weeks ago an expectation of weaker prices as price remained below the $61.80 level.

Last week saw a decisive move above this level although the RSI remains extended.

Currently the price remains with the 2019 historical price consolidation area, and may further consolidate at these levels.

The indicator is “rolling” higher in line with current price. 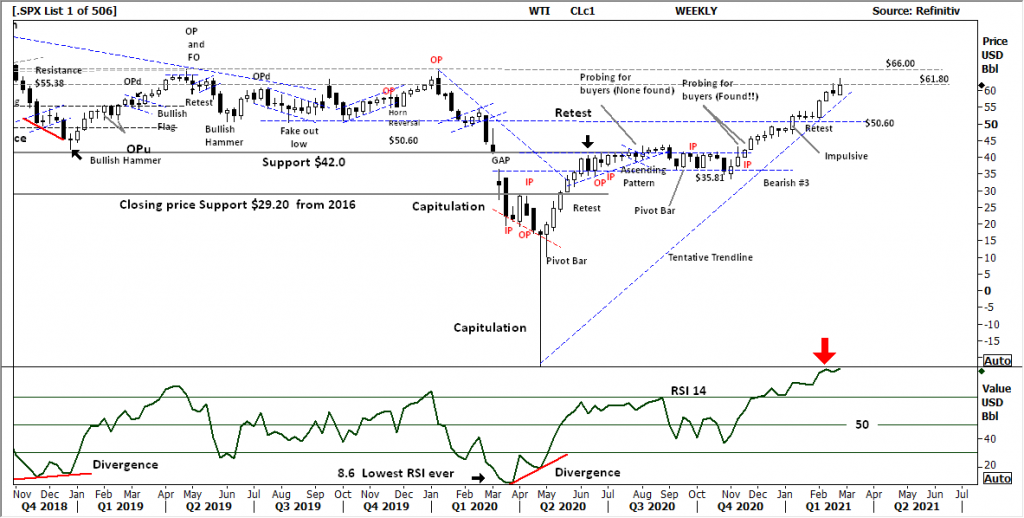 Comments from last week : Last week the $61.80 level has provided resistance to the current price advance above the $50.60 level. A short retracement could be expected in the coming days with the trendline the first level of support at $55.00