ALL Major markets entered into a technical correction in the past week. Many have reached important support levels, these levels will be tested in the coming week as traders and investment funds digest the fallout from the current Coronavirus virus and the impact on global trade. This may be the precursor to further significant falls in the coming months.

As the market has a high proportion of ETF’s in place as they are liquidated good stocks will be Sold along with bad.

The precious metals markets along with WTI Oil have followed the equities markets down in the current environment of “risk off” across everything.

The FO bar of 2 weeks ago has now played out into a significant correction of price.

The Weekly chart now sit on the major support level of 6430, this will the level to hold this week on any potential recovery on prices, this seems unlikely.

This large range movement could be difficult to overcome as sellers have control of the market.

The RSI has made a sharp reversal below “50” and is potentially heading below the 30 level.

MACD remains a buy signal, and has been be slow to react in this time frame, highlighting the at times uselessness of this method. 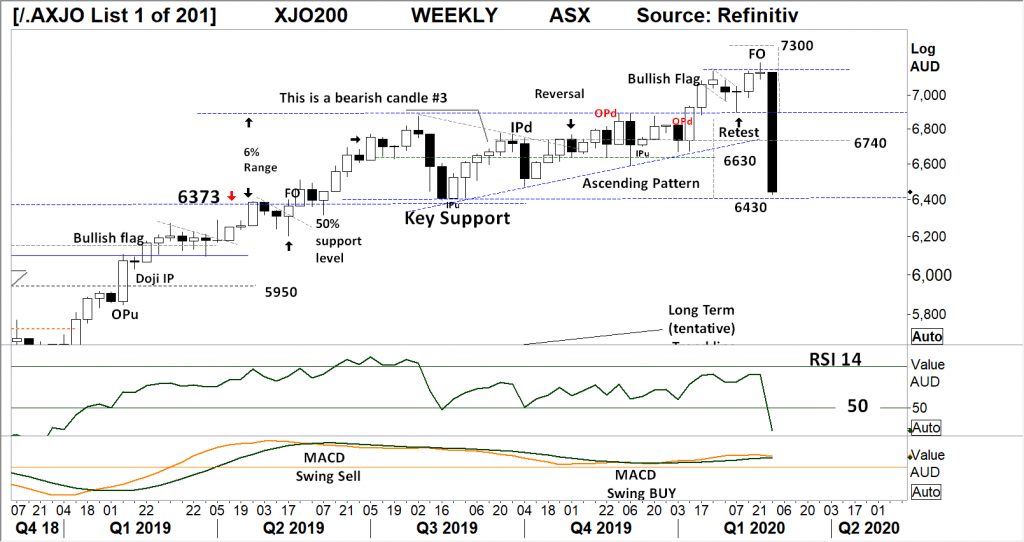 Comments from last week:
Last week’s “FO” Fake out, where price exceeds the previous “high but closes below that level is a short term bearish signal, the “retest” level of 6890 comes into play this week. The week also displays a short range week, showing a lack of Buyer interest. While the Primary trend remains UP, the early signs of retracement are now showing.

XJO DAILY
The Daily chart shows the force of this corrective move as support levels have been disregarded on a daily basis, with the final low moving to test 6400 – 6430.

Friday’s large range movement with the close at the low is a very bearish signal for further declines. Look for short term support at this level, as failure will see the psychological level of 6000 come into play. This type of movement during the past 5 trading days is “corrective” and can be the early stages of a Bear Market ahead.

Relative strength is looking to “swing sideways” as this level is considered deeply oversold. High volume of Friday is a very bearish signal, Volume should be monitored on any “up” day as low volume up days will indicate a lack of interest from the buyers. 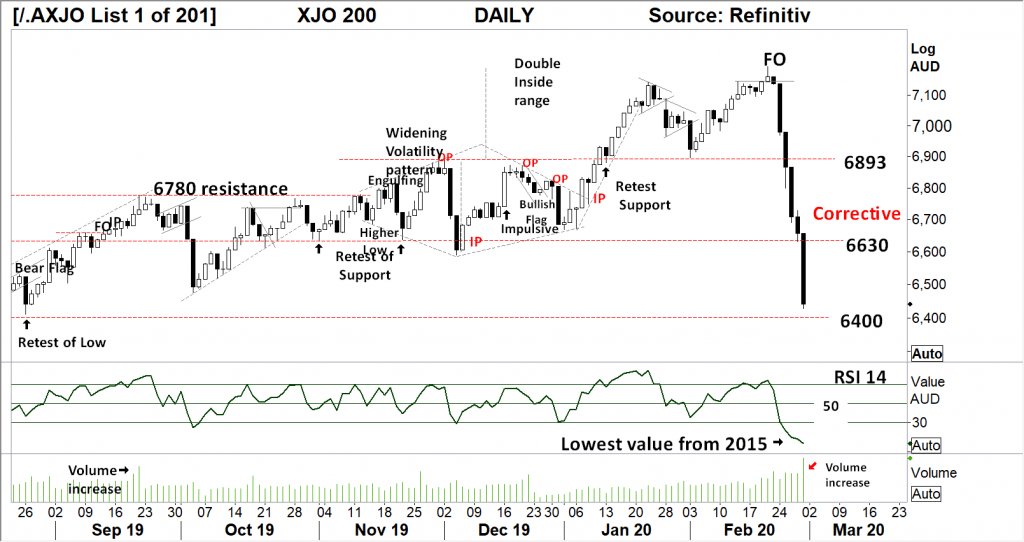 Comments from last week:
Thursday’s “shooting star” and Friday’s close below Thursdays open shows rejection of higher prices. The interim daily price target for any retracement is 7050, this level must be held in the coming days. The underlying trend is UP on a daily basis

S&P 500  WEEKLY
Following the opening GAP this market has disregarded any form of “retest” of important support levels during this significant decline. All upside targets are now off the table. The current level of 2940 must hold in the coming week to avoid further significant declines. To create any bullish type of view a WEEKLY close over 3028 will be required. Relative strength has turned lower below the key 50 level and indicates a sharp loss of momentum. 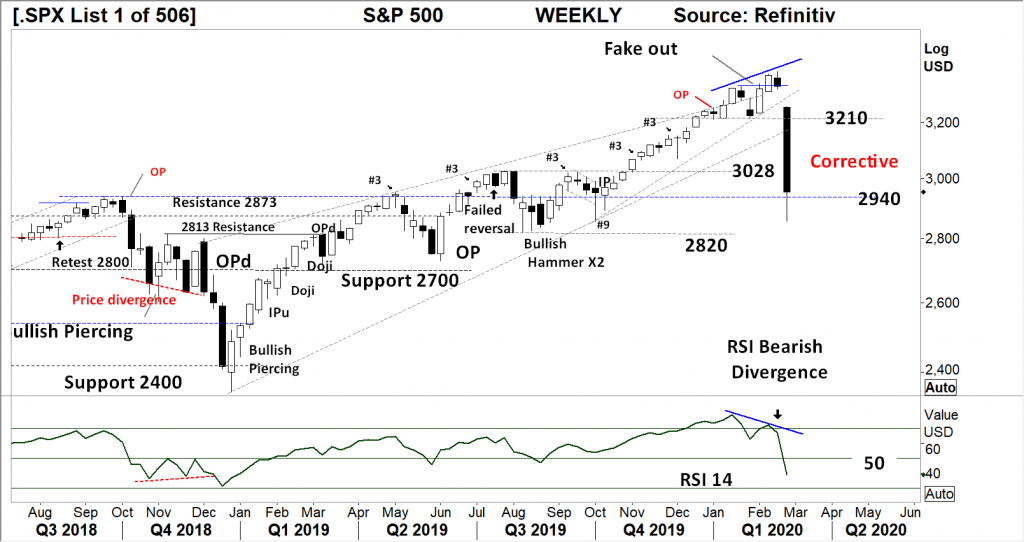 Comments from last week: One week after the FO a new high with the market closing back in to the FO level last week. Look for a retest of 3210 in the coming weeks as buyer momentum slows. The consistent rising wedge is now at risk of breaking down as Relative Strength is again moving over the “70” level showing increasing price momentum, but has moved lower, again, this is Bearish Divergence.

S&P 500 DAILY
From the Gap lower on Mondays open the sharp price falls have disregarded any intermediate support levels. Friday’s bar with the close above 2940 is regarded as a Bullish hammer and will require a “Gap” up to confirm a “morning star” type of short term price reversal.

Any short term reversal may use the historical resistance level of 3028 as an  important level to hold on any gains.The current position of the RSI is beginning to turn higher as it heads back towards the “30” level. 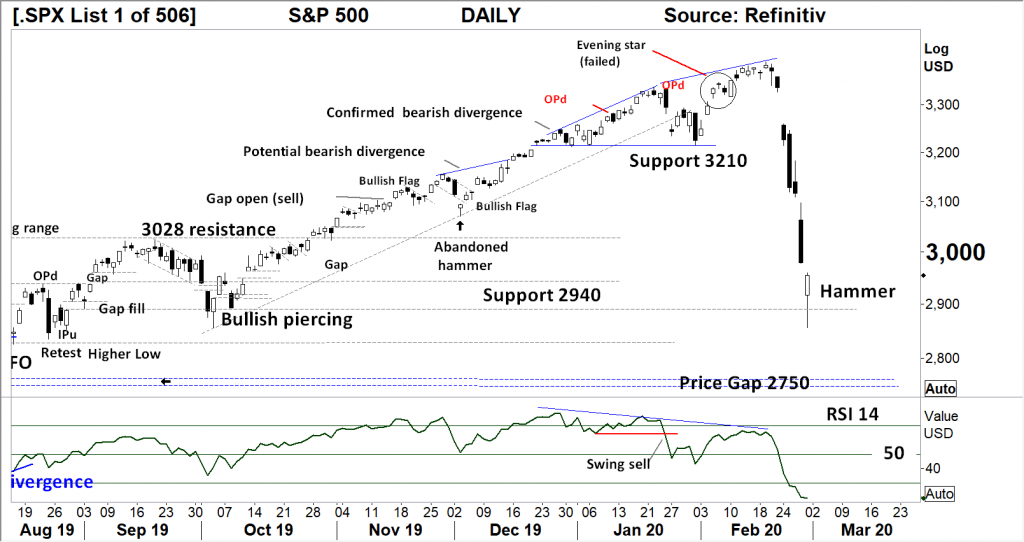 Comments from last week: Following the “evening star” last week the market pushed high, however the “collection” of short range days show a lack of buyer support, with Thursday and Friday showing the early signs of high price rejection. Relative strength is an important indicator displaying price momentum, this chart now displays a diverging indicator to the rising price. This is ultimately a bearish signal.

TRANSPORTS INDEX
From the bearish inference of 2 weeks ago the Transports now confirm the  corrective mood of the current markets with a very large range movement. The Weekly close is below the important support level of 9670 and indicates further falls are likely in the near future, as the closing price is at the lower end of the price bar, and remains a very bearish sign.

As the price has now set a lower high and a new low the Transports are now in a primary down trend. 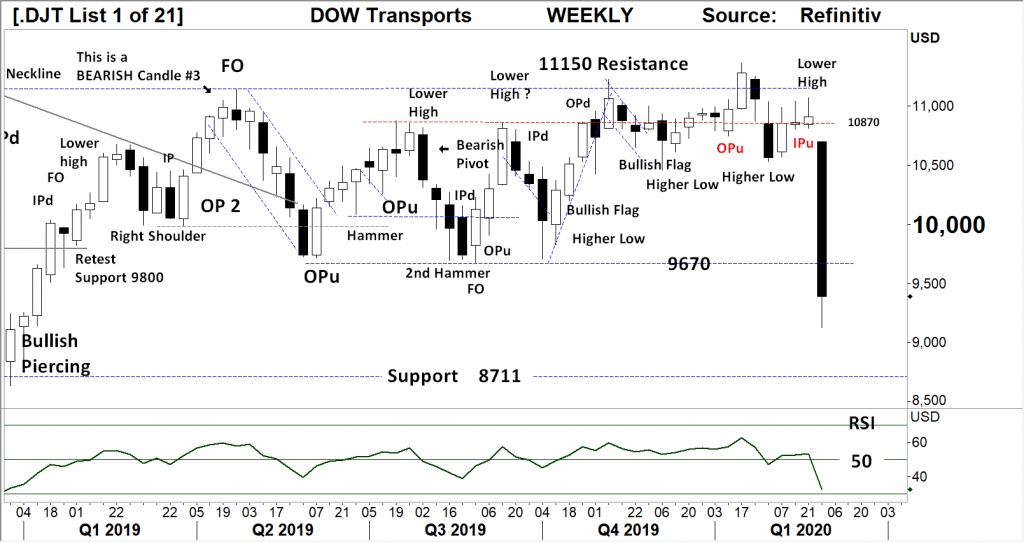 Comments from last week: Last week again saw a rejection of higher prices, the longer upper shadow shows as the price closes in the lower portion of the weekly price. 10870 remains the key level to hold in the coming weeks. This important Index is at risk of breaking the 10500 January “higher low” with the potential for the Transports to enter a Primary down trend. This would constitute one half of the two signals ( the other is the DOW 30 ) required to call as an early bear market.

GOLD WEEKLY
The Weekly chart of GOLD shows a “pipe” or “engulfing” reversal with the final bar also and “outside period” this has high significance for a high to be in place with a further price movement lower to come in this current week.

Further weakness may see the breakout level of $1517 level tested in the coming week.
Gold remains in a Primary UP trend, but should be monitored for further weakness in price.

Relative strength remains above the key “50” level, however has turned lower as this reversal in price takes place. 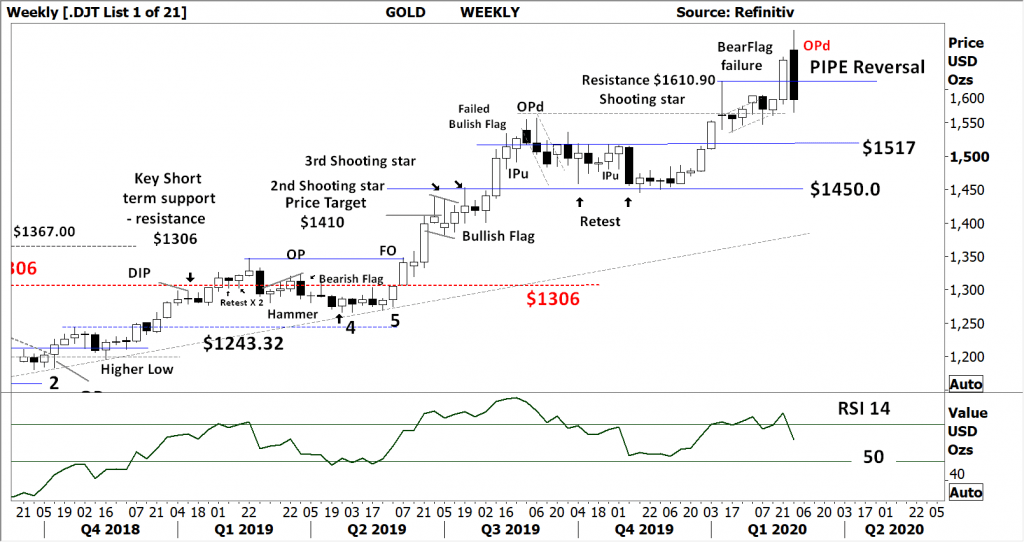 Comments from last week: Last week’s large and significant price range is a very bullish signal for further gains within this primary UP trend. Look for a further target of $1750 as momentum remains very strong. The Primary UP trend remains in place with $1610.90 now showing as the major support level to watch on any price weakness.

GOLD DAILY
Friday’s strong movement of 2 weeks ago as resulted in the “shooting star on Monday with follow through lower.

The inter-week bearish pattern has played out into the current retest of the breakout level  above $1580.

Further price declines would be expected into the retest of the major $1540 Support level of January 2020. 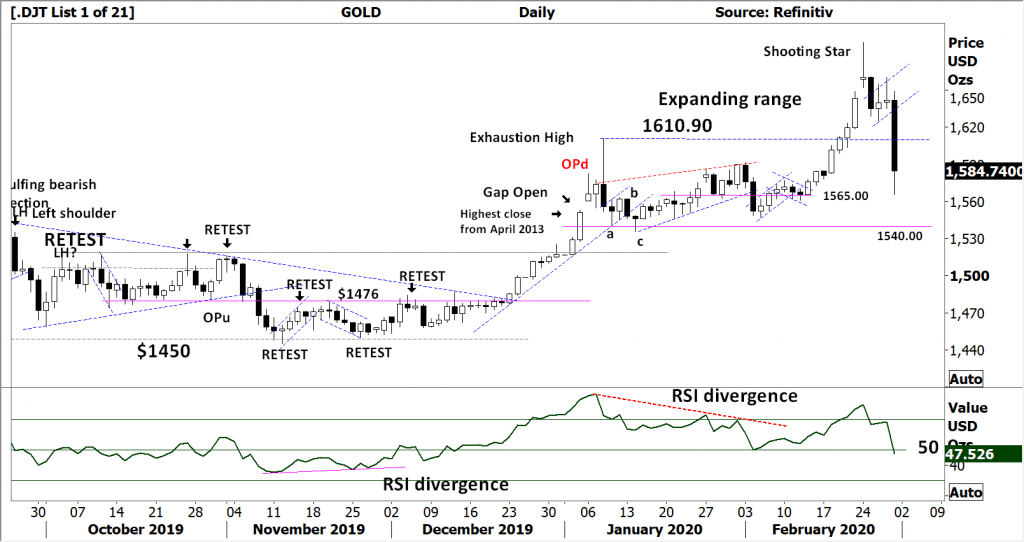 Comments from last week: In the shorter term “daily” view, Fridays move is very strong and may suggest short term exhaustion and profit taking may enter the market. The Primary trend remains up and any retracement would be shallow. Trader would look for a daily reversal in the form of a lower daily close or a break of the previous daily low.

SILVER DAILY
Last Monday set the warning “FO” (Fake Out) reversal signal with follow through for the week.

Fridays very large price movement has the potential to follow through in the coming weeks.

Traders would monitor the $16.60 level for a breakdown in price in the coming days, this type of “corrective” movement is a bearish signal for further declines in this current risk off everything environment. 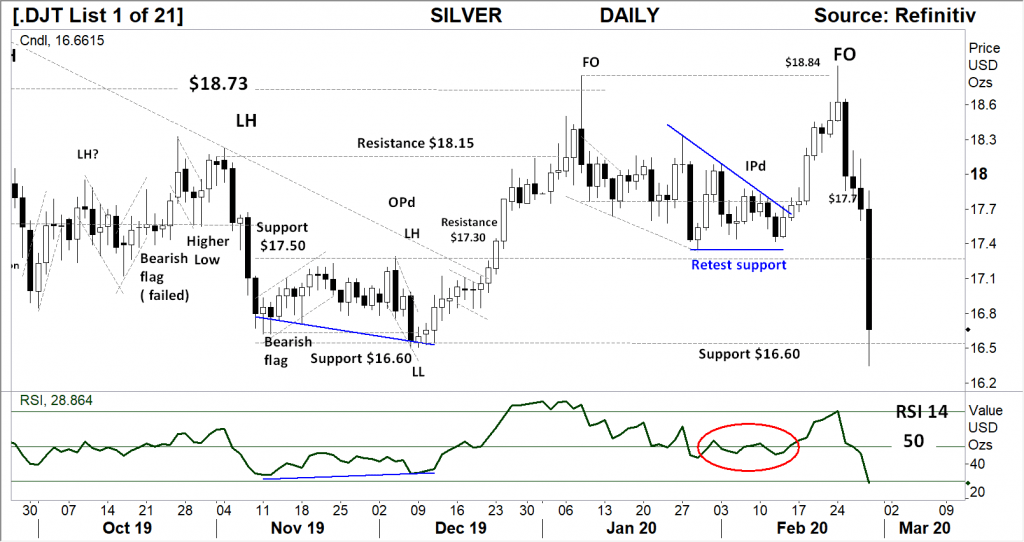 Comments from last week: While silver has moved strongly higher, the metals price has failed to extend past the FO high from early January. Friday’s rejection candle can only suggest some small consolidation on price is on the way. $18.84 remains the important resistance level in the coming days, a price breakout over this level could set a $20.00 price target.

Current volatility levels, shows a significant increase in forward volatility  values, this is a Bearish sign the market has increased immediate near term  risk to valuations. This is expected to move higher in the coming weeks. 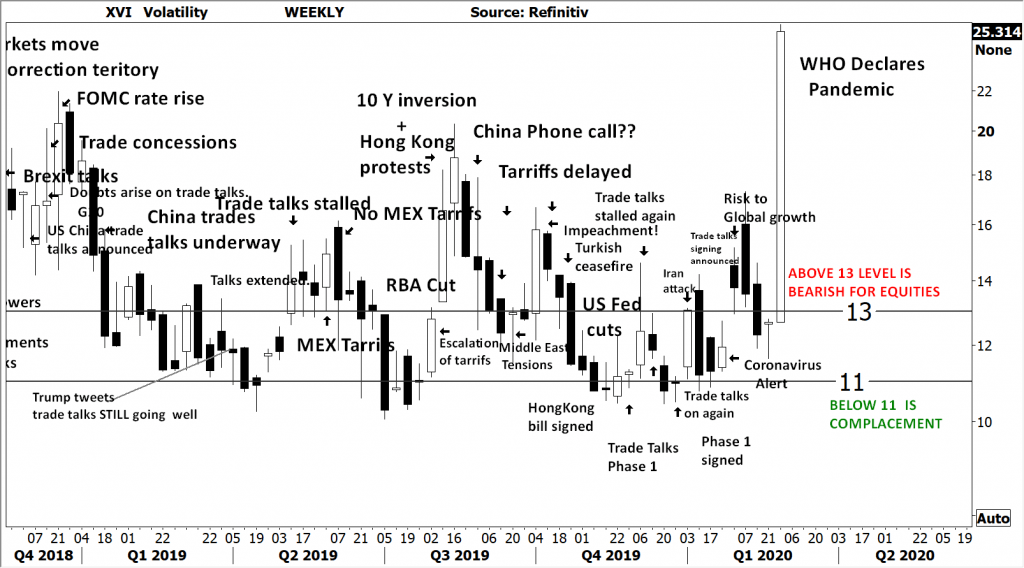 USD INDEX DAILY
Last week shows the 98.45 level broken, any price rally form this level may use this.
As the resistance level for sellers to again enter the market.

Relative strength is showing weak momentum and has turned lower below the 50 level, this week will show a potential movement below the next key 30 level on any further weakness. 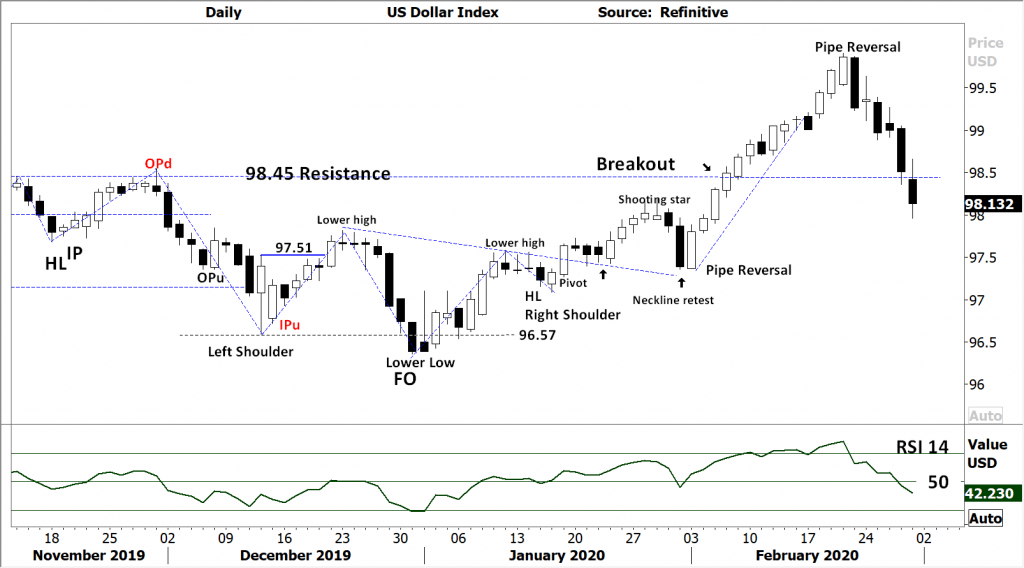 Comments from last week: Following the persistent strong move higher, the “pipe” reversal is a very strong indicator of high price rejection, the Buyers have set about taking profits with a potential retest of 98.45 underway. This will place further pressure on Commodities price.

WTI CRUDE OIL
The developing “bearish” flag pattern has played out into a further price decline below the important $50.0 level.

Last week a large range price bar had the potential to follow through to the projected $42.0 support level.

A closing price break of the $42.00 significant support level would project a very bearish picture for further declines to $40.0 and $38.0.

Relative strength has moved below the “30 level indicating weak price momentum and has the potential to remain low for some weeks. 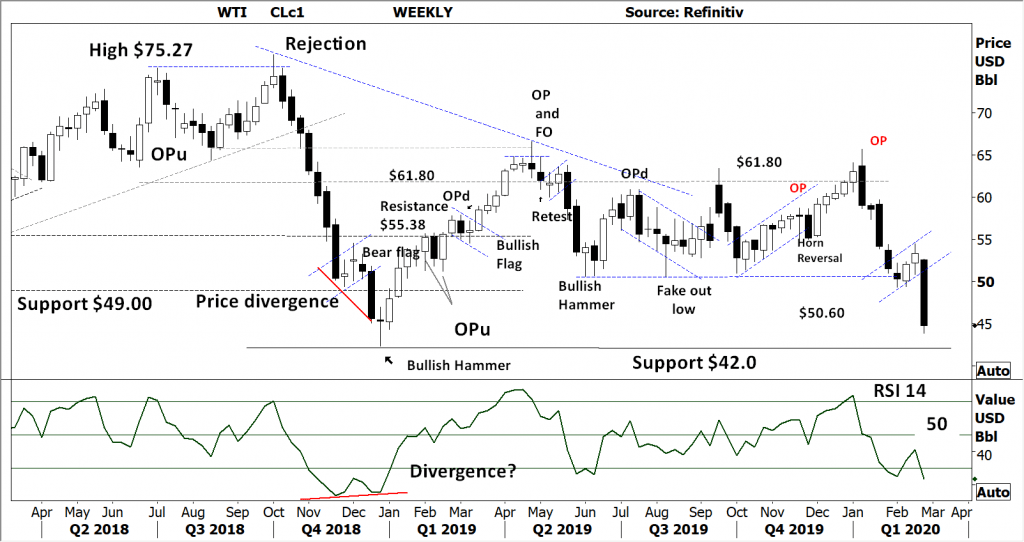 Comments from last week:  The is NO underlying primary trend in play and Oil remains dependent on Supply issues. Last week’s follow through higher is “weak” and may be the early sign of a further Bearish flag pattern developing. Any price breakdown below the $50.60 support level would be very bearish in the coming weeks.