The short term picture is for a sharp reversal resulting from Relative strength Divergence indicated in the Daily charts.

Oil remains in a Bull market still with the potential $130 blow off high as the current target.

Gold and Silver remain within the long term trading range, however some early Bullish action may see the metals trade higher.

XJO WEEKLY
Price structure:  Bearish Flag playing out
The strong impulsive move last week has the potential to test the 6200 points support area. The XJO is now in a Bear market trend as last week’s range extends lower than the previous lows set during 2021. While the Index has broken down through several support levels, these levels should be monitored for resistance when the market attempts a short term rally. 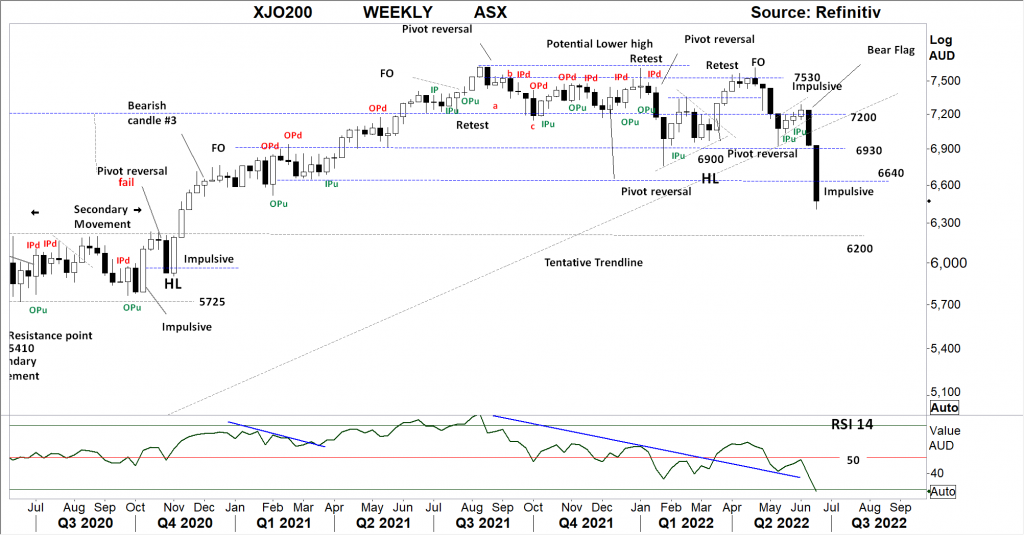 Comments from last week: The XJO Index displays a large range directional movement to the downside to test 6930, a further closing price below this level would put the Index value below the current 20 week trading range. A closing price below the 6930 targets 6640 as a Major support level to hold. The XJO has remained within  a now significant trading range for the past 16 months with an overall declining relative strength still underway.

XJO DAILY
Price structure:
The strong decline can be seen in the Daily chart  from the large decline set last Tuesday. Prices are a reflection of market participation and the market price for future economic events. With the Relative strength extended below the 30 level, the potential for a short rally is in play. The potential for a close above 6600 remains, however, should be regarded as a Bear Market rally.

Indicator: Relative Strength 14
The Relative Strength Indicator (14) reflecting the underlying price momentum has moved lower from above the 50-level indicating a shifting to slowing momentum. A continuing move below the 30 level would be a negative indicating further declines in the underlying Index. However this is the area to monitor for a Bullish divergence signal. 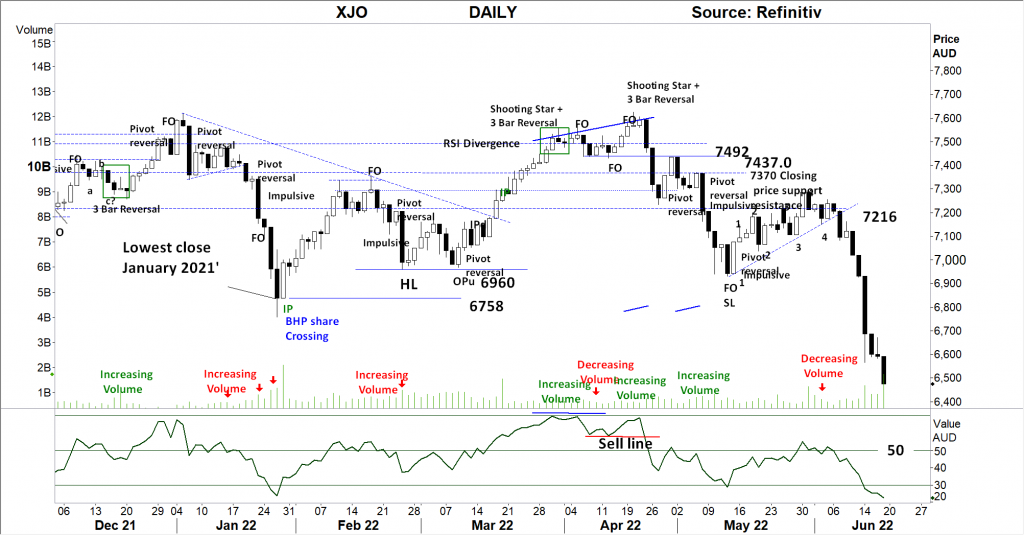 Comments from last week: The Index finished with a 4-month closing low, the current market displays a strong Bear market structure with Lower highs and lower lows confirmed with the Bearish Flag breakdown pattern underway. The expectation is for further declines towards the 6758 level before any price support becomes evident..

S&P 500 WEEKLY
Price structure:
With the Index closing below 3715 towards the 3600 level, traders would look for support at these levels. The Weekly chart is within a well defined Bear market Down trend. Last week opened with a Gap, (Gap open buy signal) resulting in trading this week that may cover that Gap as the chart has the potential retest high to the 4050 level.

Indicator:  Relative Strength Indicator 14
Price movements are considered positive with a reading above the 50 level, with this continued reading below the key 50 level indications are that price momentum is bearish, an ongoing reading below 30 would confirm the continuing Bearish price movement in the price chart. The potential for an accelerated move lower remains if the momentum slows and moves lower below the 30 level. 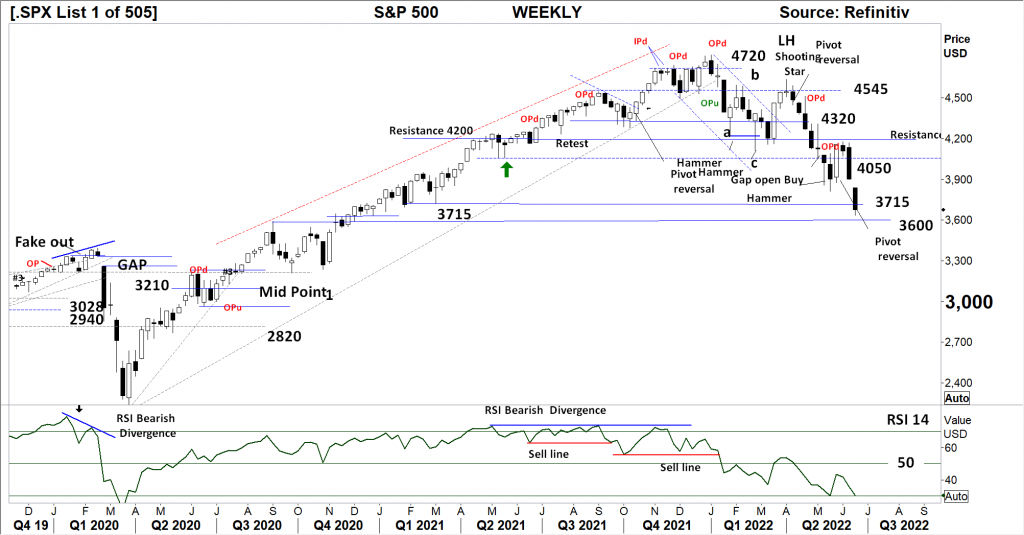 Comments from last week: Only a strong close over the 4050 level would send a signal for a Short position cover. The S&P 500 remains within the definition of a Down trend of identified Lower high (mid-April ) and Lower Low (Current Mid May). The Pivot reversal of 3 weeks ago has failed to follow through to higher price with persistent selling to close at a 15 month low. The next support level of 3715 remains the only significant support level to hold, a closing price breakdown from this level targets 3000 points.

S&P 500 DAILY
Price structure:
Following the Gap open for the Week, the S&P 500 Daily chart shows the open close within the trading range becoming narrower, indicating “balance” coming as sellers are losing control. Momentum to the downside is slowing. Any price movements higher would be considered a Bear Market rally.

Indicator: Relative Strength 14
Relative Strength Indicator (14) has made an equal reading to close the week below the key 30 level. Bullish divergence may be developing and should be monitored for a move above the 30 level as an indicator derived Buy signal. 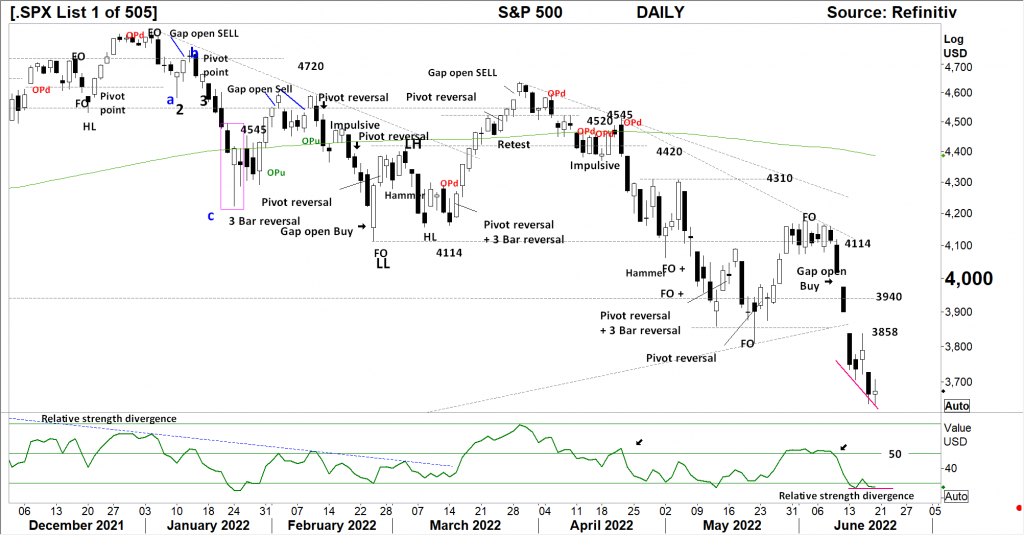 Comments from last week:  A retest of the trendline is underway at the support level convergent point of 3858.0. The high momentum decline (100 points per day) from the 4114 support level is a very bearish signal for further declines within this established down trend. The “Gap open buy” Gap may be filled with a Bear market rally, however the decline is far from over without a major key reversal pattern.

NASDAQ DAILY
Price structure:  Primary DOWN Trend remains
Close to the Week, the Nasdaq has set a 3 Bar reversal pattern, with the potential to trade higher towards the 12573 level. The mixture of Daily up closes against the down close days shows the Nasdaq coming into balance as sellers lose control. The Nasdaq remains within a well defined Bear market structure, any price rally may be short and sharp as buyers attempt to enter the market.

Indicator: Relative Strength 14
Relative Strength has moved higher during the week setting up a small divergence signal. This is not an Ideal signal being above the 30 level, however the Nasdaq historically responds to this type of signal. 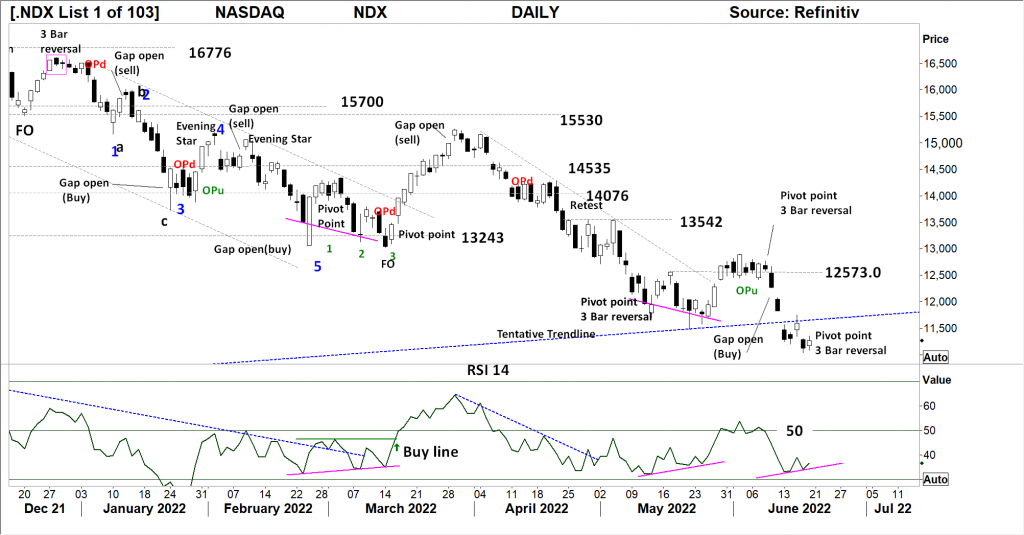 Comments from last week:  The breakdown from the 12573.0 level is in line with the Primary Down trend. A retest of the “tentative” trend line (2 points so far) seems inevitable in this ongoing Down trend. The Gap down shown for last Friday may instigate some buying to resolve the open Gap and would be viewed as a Bear market rally.

USD Spot GOLD – DAILY
Is it a Bull market?  Answer = No
Rejection again at the $1876.90 level saw Gold again retest the Long term trendline, the immediate price rally above the $1834.0 level is a positive, with last Friday’s price action again retesting this level. Last week failed to follow through from the OPu of two weeks ago, again leaving Gold trading within a well-defined trading range of many months. 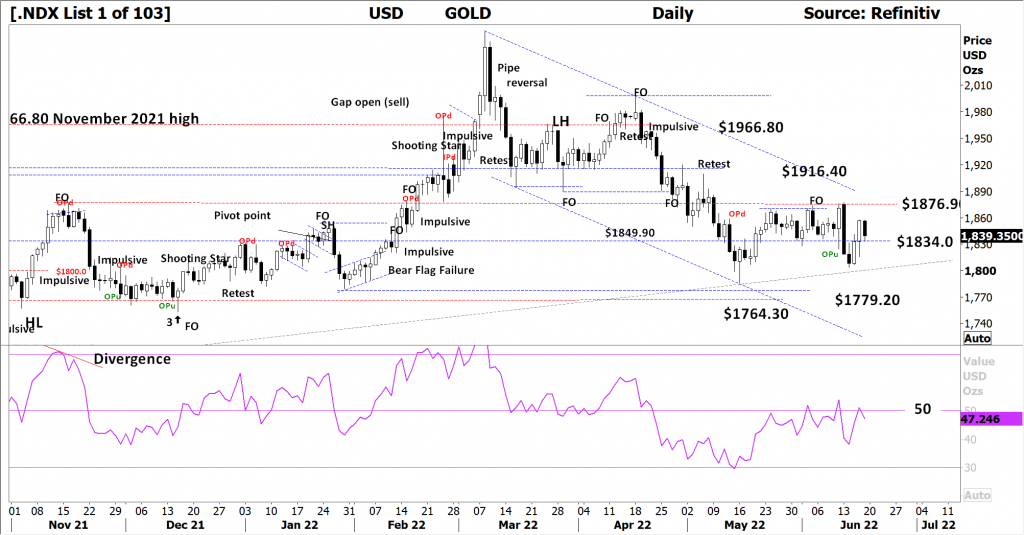 Comments from last week:  Comments from last week suggested a close below the $1834.0 level would be a bearish signal. This has not been the case in the past week. The large $40 range outside bar (OPu) new low and new high shows that indecision remains for the direction of the Gold price. A very Bullish development with the OPu as a strong marker of a turning point should price close higher over the $1871.0 closing price. The current consolidation from late May to this OPu can be described as a Bullish ledge.

SILVER DAILY
Price structure:   Bull market? – Early signals are important. None
From the strong sell down last Monday, shows no follow through lower, Silver has recovered price back towards the key $22.50 level. Although Silver remains within a well defined trading range, price momentum is changing to the positive. ( See RSI note)

Indicator:  Relative Strength 14
Current Relative Strength is moving higher but remains below the 50-level, RSI turning higher shows price momentum is improving. A continuing move below the 50 level and lower would be very bearish in the short term, and the potential for a further move higher remains should price close above the $22.0 level. 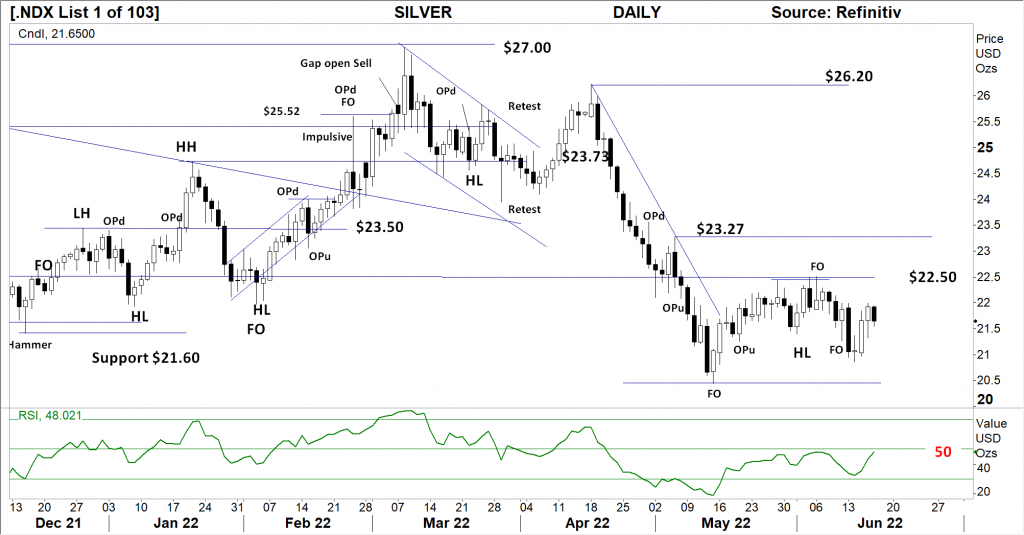 Comments from last week:  Last Friday Silver set a Fake out (retest of a previous low) and finished with a high close “Hammer” , a very bullish signal for immediate further gains with the first retest level of $22.50. This level has been tested multiple times, a breakout above $22.50 would be a strong development for further retest higher to $23.27. Further consolidation seems to be the theme until a higher closing breakout move over $22.50 or below the $20.50 level. 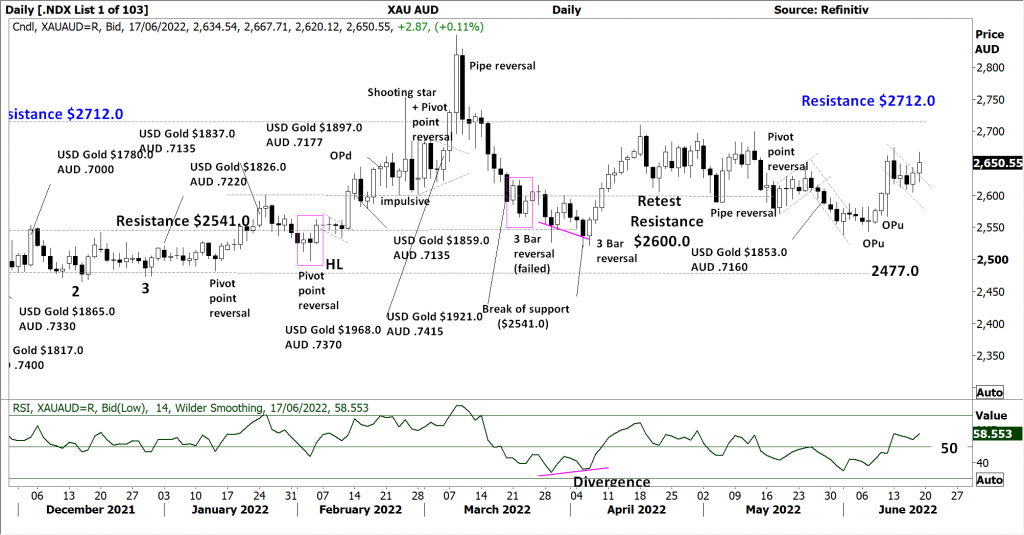 Comments from last week:  The $AUD USD Gold chart displays a very strong turnaround with significant range expansion to the upside (OPu). While the Index remains within a well-defined support resistance zone the potential for a breakout higher over resistance of $2712.0  is now a strong possibility. This strong movement would indicate a retest of $2819.0 high is underway.

COPPER DAILY
Price structure:
The “Bear Flag” development below the $4.50 level has played out with Copper again retesting the $4.0 level. The price movement last week is impulsive (strong range high to low) following the Gap open. A break of the $4.0 level would show the sellers in control with the $3.80 level as next support. 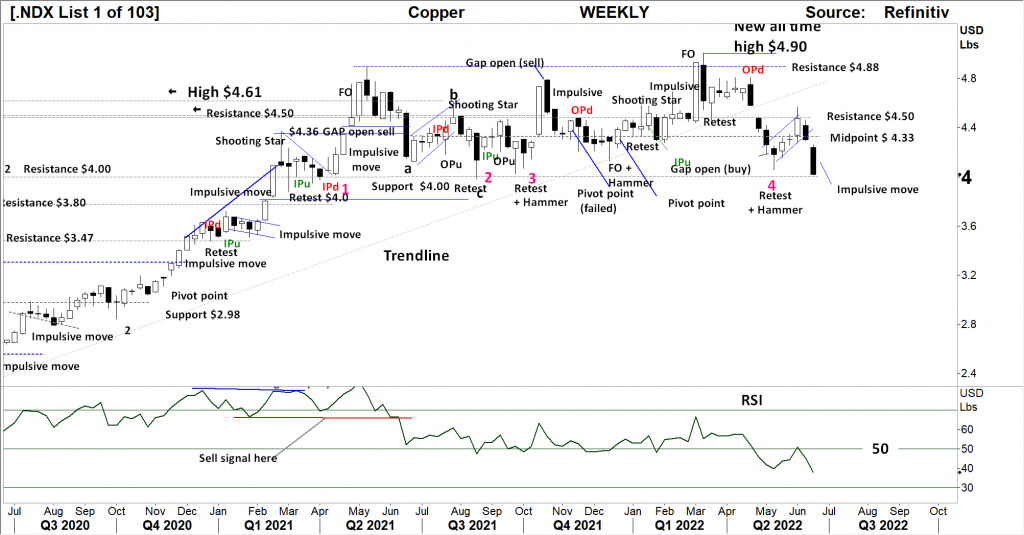 Comments from last week:  The failure of price to close above the $4.50 resistance level is a significant development. Copper should be expected to again retest the support low of $4.00 should this reversal signal play out. Copper remains within a well-defined consolidation pattern between resistance of $4.88 and Support of $4.00.

AUSTRALIAN VOLATILITY INDEX
The significant increase in volatility has reflected in the decline in equities, 3 months forward PUT option insurance has again increased, suggesting a more risk off approach. While the reading remains above the key “13” level as a bearish indicator further declines in equities can be expected. The cost of 3month forward PUT options is decreasing from recent elevated levels.

The XVI is the difference between 3-month forward pricing of ETO Options against  current month. 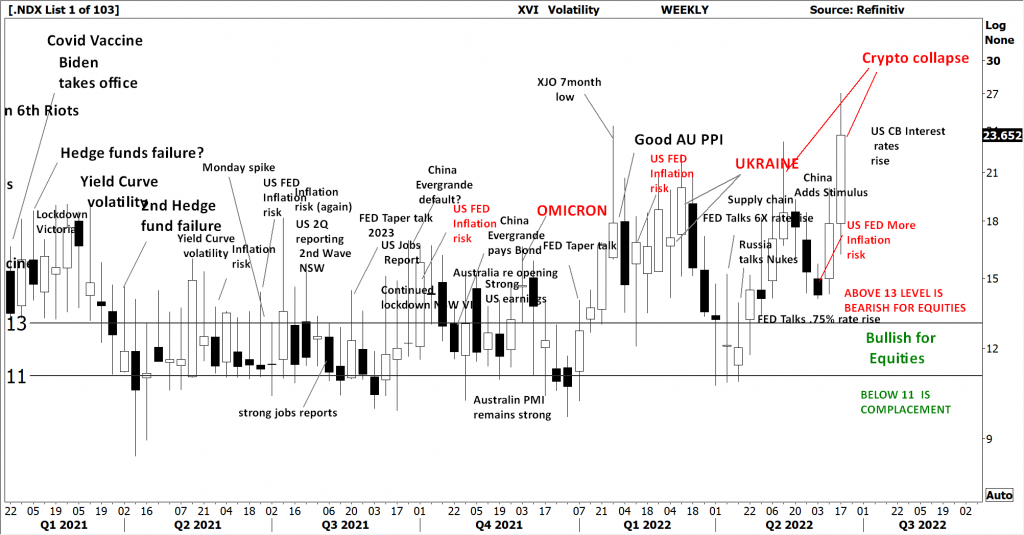 Comments from last week: The XVI value is expected to rise this week as forward protective risk is again priced in.

USD DOLLAR INDEX
Price structure:
The USD Index has retested lower during the past week, however Friday’s price rally back above the 104 is a further bullish development. Consolidation could be expected to develop below the 105 level and above 104. 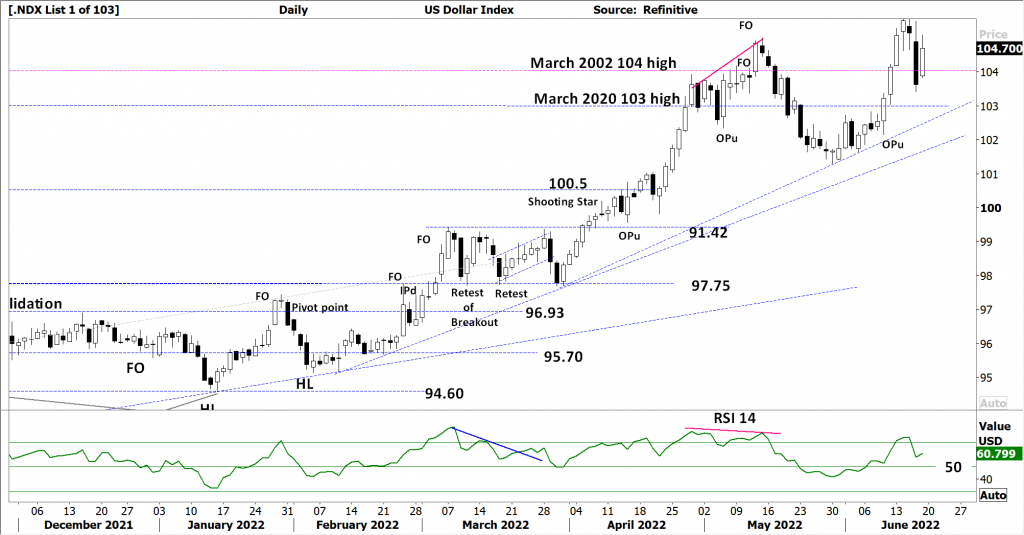 Comments from last week:  The USD Index displays a strong Primary movement underway, with the OPu now being the marker for completion of the rounding base developed over the past 2 months, this a very bullish pattern, with he first target at the 13th May high point of 105. A strong turnaround from last week’s comments. The further price extension is 106.30 The now significant UP trend remains without any meaningful reversal signals.

WTI – CRUDE OIL
Price structure:  Full Bull Market. This commodity is highly news driven around supply -demand.
The WTI contract price has developed momentum divergence confirmed with the OP (outside period) reversal on Friday to retest the important $107.73 support resistance level. The risk remains for a retest of the recent highs and a further blow off top to $130.0 as the contract price remains with a Primary UP trend. In the short term current price movement has the potential to retest the long term trendline circa $100.0.

Indicator: Relative Strength 14
Relative Strength is developing a divergence signal as price makes a new high without the Relative strength making a new momentum high. The sell signal will be developed should the RSI line cross down below the internal low (red) line currently in play. 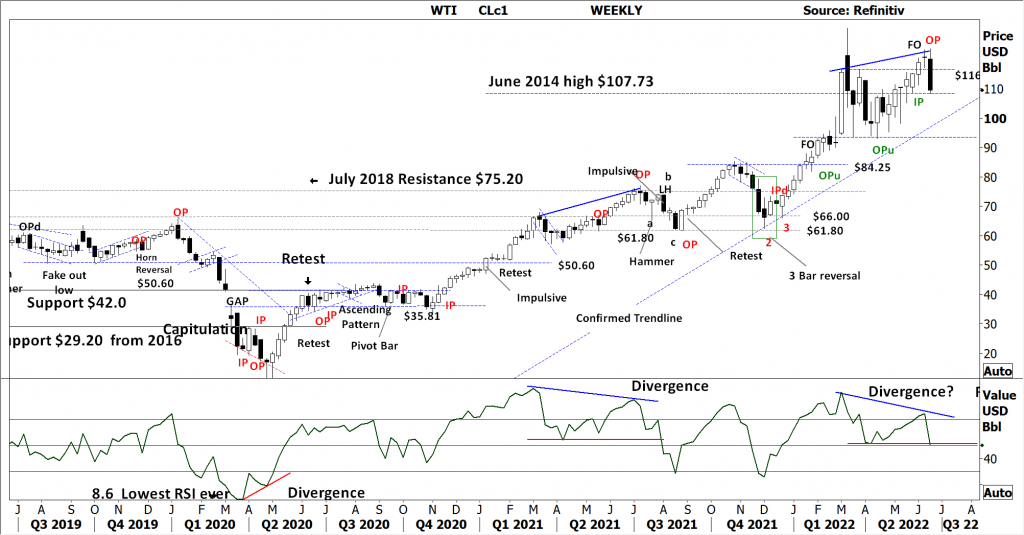 Comments from last week: The West Texas Intermediate Contract remains within a strong Primary UP trend. The current close above the $120.0 level has the potential to retest the 7th March 2022 closing high of $124.80 and higher. The potential for a final high momentum blow off top above $130 is now in play. Relative Strength is developing a divergence signal as price makes a new high without the Relative strength making a new momentum high.