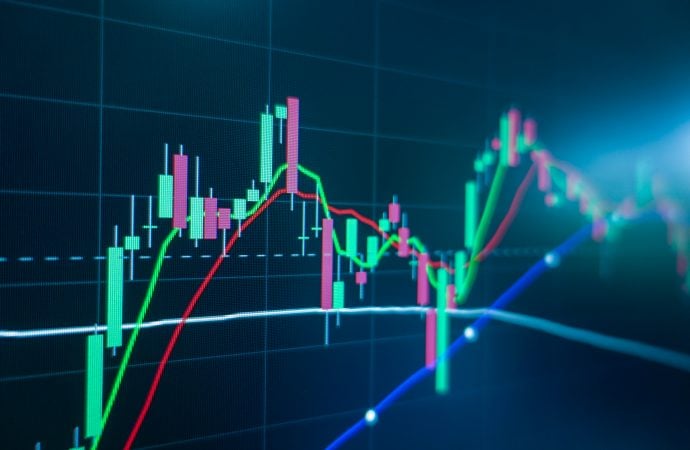 Extending the prior week’s retracement, the US dollar, by way of the US Dollar Index (USDX), finished another week in the red, erasing 1.4 per cent. Month to date, the buck is 1.5 per cent lower.

Recent technical studies, as you can see, unmasks resistance-turned support at 100.92, accompanied by a 50-day simple moving average at 101.32 and an ‘acceleration’ trendline support, extended from the low 95.17 (yellow zone). Technicians are also likely to acknowledge an additional layer of ‘psychological’ support nearby at 100.00.

Trend direction has exhibited well-defined upward movement since price made contact with support from 89.69 in May 2021, which may help reinforce 100.92 support and appeal to dip-buyers this week. 100.92 is also bolstered by the relative strength index (RSI) shaking hands with support between 40.00-50.00: a ‘temporary’ oversold region since August 2021. Support around the 50.00ish neighbourhood is common in strong upward facing markets, similar to what we’re experiencing at present.

The euro wrapped up another week on the front foot against the US dollar, adding 1.7 per cent, following the prior week’s bullish engulfing candlestick formation on the weekly timeframe (just north of 2nd January low at $1.0340 [2017]). Despite upside interest, the weekly scale has Quasimodo support-turned resistance at $1.0778 on the radar this week, in a market decisively trending lower since 2021. Sharing chart space with the aforementioned weekly resistance is also the daily ascending support-turned resistance, drawn from the low $1.0340. The ascending line become a visible base after the unit overthrew the $1.0638 resistance, which is now a possible support on the daily scale. Also of technical relevance on the daily is the relative strength index (RSI) exploring ground above its 50.00 centreline (positive momentum) and eyeing indicator resistance at 63.66. Consequently, longer term, interest is likely to remain on current weekly and daily resistances.

On the other side of the technical fence, however, a positive outlook is evident. H4 trendline resistance-turned support, taken from the high $0.7661, served buyers well in recent trading. Upstream on the H4 chart directs attention to resistance made up between $0.7246 and $0.7217 (lower edge derived from a Fibonacci cluster). Adding to the bullish vibe, we recently witnessed H1 flow touch gloves with a H1 ascending triangle (between $0.7036 and $0.7100) profit objective at $0.7167. Overhead, $0.72 calls for attention.

In light of the above analysis, knowing daily price connected with $0.7170 resistance, H4 resistance at $0.7246-0.7217 could be left unchallenged. Follow-through selling from the H1 pattern profit objective of $0.7167, action that engulfs $0.71 to the downside, adds weight to a bearish narrative this week and may encourage breakout selling.

Outlook unchanged due to lacklustre movement.

Month to date, USD/JPY is more than 2 per cent lower, on track to take a bite out of April’s 6.7 per cent advance. Registering a third consecutive weekly loss last week, the secondary correction within the primary uptrend (since the beginning of 2021) on the weekly timeframe demonstrates room to extend losses to support from ¥125.54, a resistance-turned support drawn from as far back as 2002. A similar picture is evident on the daily chart, though it is worth underlining that the relative strength index (RSI) is touching gloves with familiar support between 40.00-50.00 (temporary oversold base since May 2021), together with testing a double-top pattern (87.52) profit objective at 45.83.

Focus remains on H4 resistance from ¥127.44, bolstered by a local H1 ascending support-turned resistance, pencilled in from the low ¥127.03. Having noted scope to discover deeper water on the bigger picture, and H4 price retesting resistance, sellers could strengthen their grip this week, targeting ¥126.00 (H4 double-top pattern profit objective), set just north of the weekly support base mentioned above at ¥125.54.

Long term, this market has been entrenched within a strong primary downtrend since early 2021, emphasising weekly resistance at $1.2719 and daily Quasimodo support-turned resistance at $1.2762 as a possible ceiling, should price test the area this week. Although void of resistance, it’s worth noting that price action on the daily finished Friday in the shape of a shooting star candlestick pattern—a bearish signal. Interestingly, though, the daily timeframe’s relative strength index (RSI) is poised to reclaim the 50.00 centreline: positive momentum.

H1 Quasimodo support-turned resistance at $1.2651 entered the fray early trade on Friday and maintained its position into the close. This perhaps sets the stage for a break beneath $1.26 to trendline support, drawn from the low $1.2155, which happens to be seated just ahead of a Quasimodo resistance-turned support at $1.2554. H4 resistance at $1.2686-1.2614 is also active.

As a result, in spite of the bigger picture demonstrating some elbowroom to extend the current pullback, short-term action could see H1 pull under $1.26 to test the noted H1 trendline support to entice buyers in order for a push towards weekly and daily resistances this week.

Daily support from $28,849 remains critical structure on BTC/USD, withstanding a number of downside attempts since 11th May. For that reason, $36,361 and $34,048, both daily Quasimodo support-turned resistance barriers, are unlikely to be challenged this week. Territory south of current support unlocks the path to support around the $20,000 neighbourhood.

From the H1 timeframe, recent writing noted the following:

Buyers and sellers have been battling for position between $30,626 and $28,710 since 17th May, consequently establishing a clear congestion (consolidation) area. Beyond the aforesaid range, Quasimodo resistance awaits at $31,000 and a Quasimodo support is seen from $28,089, which happened to welcome price in the early hours of US trading on Thursday last week.

H1 flow is, once again, testing the mettle of range support, threatening a move lower this week, in line with the bigger picture trend and soft support (see above). In the event of a $28,089 break, H1 breakout sellers are likely to take aim at Quasimodo support priced in at $26,551. Longer term, the primary trend has been south since topping at $69,000 in November 2021, adding weight to a potential break lower.

In $ terms, spot gold ended last week eking out a modest gain and consequently extended the prior week’s recovery. Technical studies out of the daily timeframe sketched a harmonic Gartley pattern (PRZ) between $1,815 and $1,843, which has welcomed (and largely embraced) price action. Complementing the PRZ is the 200-day simple moving average at $1,839 and a 61.8% Fibonacci retracement at $1,827. Upside price targets are recognised at $1,896 (38.2% Fibonacci retracement derived from legs A-D) and a $1,959-1,974 resistance zone.

Meanwhile, the daily chart’s relative strength index (RSI) is poised to confront the lower side of the 50.00 centreline. A break north of here demonstrates positive momentum and bodes well for the noted Gartley pattern.