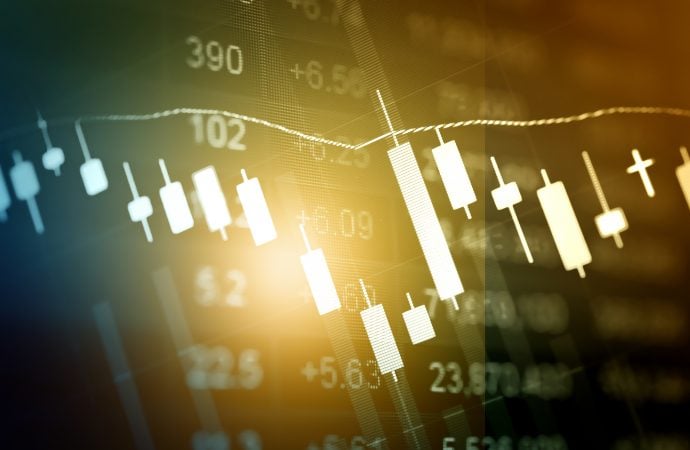 A decisive rebound from the aforesaid demand shifts attention back to the possibility of fresh 2021 peaks and a test of ascending resistance (prior support – 1.1641). Extending lower, on the other hand, shines the technical spotlight on trendline resistance-turned support, taken from the high 1.6038.

Europe’s single currency rose 0.3 percent against the US dollar on Friday, snapping a three-day bearish move that had price dethrone the 200-day simple moving average around 1.1857.

Retesting the underside of the SMA is possible this week, while a continuation south has Quasimodo support from 1.1688 to target.

Technicians will also note early bullish divergence forming out of the RSI oscillator, with upside moves eyeing trendline resistance, taken from the peak 76.00.

Thursday’s test of Quasimodo support at 1.1779 and the double-top pattern’s take-profit target at 1.1774 (yellow) welcomed some mild respite Friday.

Resistance at 1.1818—a previous Quasimodo support level—could reinvigorate a bearish scenario early week. Territory north of the level, though, throws light on trendline resistance, taken from the high 1.2242.

Friday’s buying pressure lifted the currency pair to the 1.18 figure, with the base delivering moderate resistance amid US hours.

RSI movement concluded the week above 50.00, consequently positioning the value within striking distance of trendline resistance, etched from the peak at 73.00.

The daily timeframe making its way through the 200-day simple moving average voices a bearish vibe this week, suggesting monthly buyers out of demand are unwilling to commit at this point.

Absence of decisive bearish interest from 1.18 on the H1 Friday, together with room to advance on the H4 to resistance at 1.1818, may trigger a breakout move above 1.18 early trade.

Therefore, according to the charts, a short-term bullish scenario above 1.18 could form this week, targeting 1.1850. It is here, sellers will perhaps anticipate a bearish presence, given the 200-day SMA connection.

As March draws to an end, the pair trades lower by 0.9 percent, probing February’s lows. Should sellers take the reins going forward, demand is in view at 0.7029/0.6664 (prior supply).

Out of the RSI oscillator, the value left oversold space unchallenged last week and rotated higher to reclaim 40.00+ status.

Quasimodo support at 0.7592 made an entrance in the latter half of last week, prompting Friday’s upside.

Failure to extend recovery gains could lead AUD/USD under 0.7592 to another layer of Quasimodo support at 0.7529.

Notable developments Friday had the US session extend recovery gains, consequently taking on trendline resistance, etched from the high 0.7849, along with two nearby resistances at 0.7622 and 0.7636 and the 100-period simple moving average.

Should traders extend Friday’s outperformance this week, the 0.77 figure calls for attention, a psychological level anchored just beneath supply plotted at 0.7716/0.7707.

Interestingly, RSI action nudged into overbought territory at the close Friday, following Thursday’s trendline resistance breach. Resistance at 80.85, therefore, will likely be a watched base early trade this week, with any downside moves to target trendline support, drawn from the low 19.00.

From the monthly timeframe, chart studies point to a bearish narrative. On the other side of the field, however, the daily timeframe forming a doji morning star (a bullish candlestick pattern) unlocks the possibility of buying this week.

In conjunction with the daily timeframe’s technical position, H4 exhibits scope to approach resistance from 0.7696/0.7715, and H1 conquering resistances on Friday potentially clears the runway to 0.77. Note the big figure shares space with the H4 resistance, therefore should a short-term bullish phase materialise and we reach 0.77, bearish pressure could emerge.

Following January’s bullish engulfing candle and February’s outperformance, March, up by 3 percent, is shaking hands with descending resistance, etched from the high 118.66. A forceful break of the latter swings the technical pendulum in favour of further upside.

Following three weeks of indecision just south of Quasimodo resistance at 109.38, USD/JPY bulls went on the offensive in the second half of last week and toppled the noted Quasimodo. Price action traders are now likely monitoring supply at 110.94/110.29 this week.

Based on the RSI oscillator, the value continues to circle overbought space, threatening to challenge resistance at 83.02.

Together with the RSI connecting with resistance at 86.43 on Friday (ended the session connecting with RSI trendline support [taken from the low 33.14]), price action established a session peak at 109.84. This places the spotlight on the 1.10 figure this week. However, should we extend Friday’s retracement, demand at 109.21/109.28 is in sight. Notably, below this area, limited demand is visible until 109 support.

The monthly descending resistance and neighbouring supply on the daily timeframe at 110.94/110.29 are likely to interest this week.

Taking out the head of the daily Quasimodo resistance at 109.85 would also trigger stops, fuelling any offers around the aforesaid daily supply.

According to the H1 timeframe we could have price drive higher within the H4 zone this week to reach the 1.10 figure.

After Thursday forged a recovery ahead of Quasimodo support at 1.3609, upside gain speed Friday amidst optimism surrounding Britain’s vaccine rollout.

Further outperformance this week has trendline support-turned resistance on the radar, etched from the low 1.1409. We may, however, witness momentum level off as RSI movement approaches familiar resistance between 46.21 and 49.16.

Bulls are clearly growing in confidence ahead of the 127.2% Fib extension at 1.3649, with 1.3852 resistance now in the headlights. Also sharing chart space here is trendline resistance, extended from the high 1.4241, and an ascending resistance plotted from the low 1.3778.

1.3852, therefore, represents a modest area of confluence that sellers may be drawn to this week. What’s also interesting is the daily timeframe’s trendline support-turned resistance merges closely with the H4 resistances.

A closer look at price action on the H1 chart reveals short-term flow journeyed above trendline resistance heading into London hours Friday, taken from the high 1.4001. Subsequently, price retested the breached trendline, reinforced by the 100-period simple moving average around 1.3754 and the 1.3750 support.

US trading echoed a muted tone, connecting with offers around the 1.38 figure. North of here, bullish bets are likely to take aim at resistance anchored to 1.3878, a level joined by a 61.8% Fib level from 1.3875 (green).

Referring to the RSI oscillator, movement briefly knocked on the door of overbought levels on Friday and snapped to lows of 56.00 into the close. Interestingly, the retreat elbowed under trendline support, pencilled in from the low 23.20.

The monthly timeframe displaying signs of a bearish candlestick formation, in a market trending lower since 2008, is noteworthy. Before sellers get involved, nevertheless, daily flow may mount an assault on trendline support-turned resistance. As such, short-term bullish activity is perhaps still on the cards.

Bearish bets from 1.38 appear reasonably thin, with bids bolstered by H4 action displaying room to advance to 1.3852 resistance and associated trendlines. As aired above, the daily timeframe’s trendline support-turned resistance merges closely with the H4 resistance.

As a result, chart action suggests breakout buying north of 1.38 could emerge early week, targeting the 1.3850ish neighbourhood, followed by a possible test of H1 resistance at 1.3878.