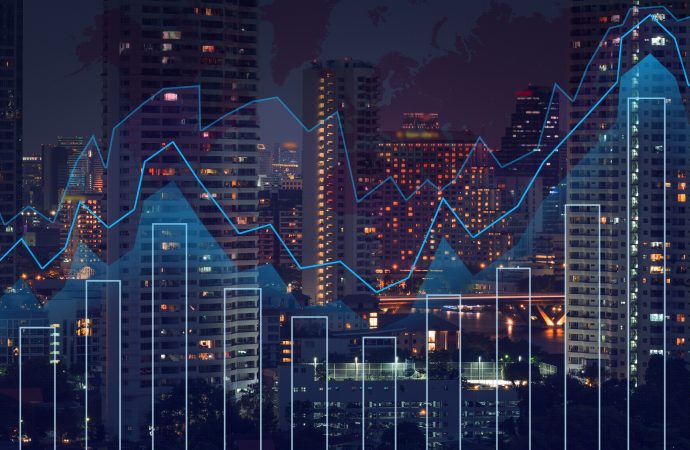 Versus six international currencies, the US Dollar Index (USDX) finished the week on the ropes. Snapping a five-week bullish phase, recent action recorded a 0.9 percent decline and established a potential bullish flag pattern between 97.72-99.25.

Consistent with the possible bullish flag, trend studies reveal well-defined upward movement. Since price made contact with support from 89.69 in May (2021), the unit has shaped a series of higher highs and higher lows. The weekly timeframe has displayed a long-term range since 2015, fluctuating between 103.82 and 88.25. Yet, this consolidation followed dominant bullish action since May 2011 (72.70). For that reason, the primary trend is considered north with the secondary trend (daily timeframe) demonstrating a clear bullish narrative.

Momentum, according to the relative strength index (RSI), recoiled from overbought territory and wrapped up the week shaking hands with trendline support, taken from the low 36.35. A break of the aforesaid trendline alerts technicians to the prospect of bullish flag failure and a test of indicator support between 40.00 and 50.00 (a temporary oversold region); this area has been centre stage since August 2021 and is a common view in uptrends.

This week will likely have traders monitor the development of the bullish flag pattern, and the test of indicator trendline support on the RSI. Trend direction backs additional buying, indicating possible moves towards resistance at 100.91-100.32. However, traders are also urged to note the possibility of further consolidation within the flag.

Following a momentary pause, reflected by way of a long-legged doji indecision candle on the weekly timeframe, EUR/USD outperformed and added 1.28 percent last week. Broad USD softness (USDX – 0.9 percent) and technical buying from weekly channel support, extended from the low $1.1186 (arranged north of weekly Quasimodo support at $1.0778), elevated the currency pair to within reach of weekly resistance at $1.1174.

$1.1174 remains a particularly prominent level this week, well-positioned within the current trend. The longer-term trend has reflected bearish status since topping at $1.2350 at the beginning of January (2021). This is reinforced by a weekly trendline support breach, drawn from the low $1.0636, together with the break of the $1.1602 November 2020 low (circled) and the pair refreshing year-to-date lows at $1.0806.

Closely joining weekly resistance at $1.1174 is daily resistance at $1.1224. Chart space north of the level unearths area to daily resistance at $1.1483. A familiar decision point at $1.0788-1.0854 remains on the radar to the downside (as well as an intersecting ascending support, drawn from the $1.0340 3rd January low 2017). An additional observation on the daily scale is the relative strength index (RSI) poised to connect with the lower side of the 50.00 centreline. Voyaging above 50.00 reveals positive momentum (average gains exceeding average losses) and suggests an approach to weekly and daily resistances ($1.1174-1.1224). On top of this, technicians will acknowledge the unit has remained beneath its 200-day simple moving average ($1.1531) since mid-June (a bearish stance).

The $1.1139-1.1090 H4 supply received price action on Thursday and, with help from H4 trendline resistance (drawn from the high $1.1495), directed EUR/USD lower on Friday. Although the supply emphasises modest (technical) confluence, follow-through selling is questionable according to higher timeframes exhibiting scope to navigate higher. H4 channel support (taken from the low $1.0806), therefore, may call for attention early week and offer buyers a ‘floor’ to work with. Assuming buyers take the wheel, a H4 decision point is placed above current H4 supply at $1.1234-1.1195.

A closer inspection of price movement on the H1 timeframe shows Friday came within a whisker of $1.10 before spinning higher. $1.10 is likely to be a watched location early week. There will be a number of traders looking to fade the psychological level, following Thursday’s higher high at $1.1138 helping to ‘confirm’ an immediate trend higher. Knowing this, a whipsaw beneath $1.10 into Fibonacci support between $1.0971 and $1.0992 (houses a Quasimodo support from $1.0983) could materialise. Efforts to travel higher this week on the H1 scale has $1.11 to target, followed by Quasimodo resistance at $1.1138.

From a short-term perspective—recognising that higher timeframe resistances show room to move higher until at least $1.1174—a whipsaw beneath $1.10 to Fibonacci support at $1.0971-1.0992 is possible on the H1 timeframe and may ignite a short-term bullish scene. What gives the Fibonacci zone extra credibility is H4 channel support dovetails with the area.

Reclaiming the prior week’s down move, AUD/USD regained upside control last week and rallied 1.7 percent. Weekly prime support at $0.6948-0.7242 continues to serve despite struggling since late 2021. Weekly resistance is nearby at $0.7501, sheltered under weekly prime resistance at $0.7849-0.7599. The trend, however, appears to be averse to the idea of surpassing the noted resistance levels. Longer term—the monthly timeframe—has portrayed a downtrend since August 2011, suggesting the 12.6 percent correction from mid-Feb tops at $0.8007 (2021) on the weekly timeframe might be the start of a bearish phase and not a dip-buying correction from the 2021 advance from pandemic lows of $0.5506. This places a question mark on weekly prime support and highlights a possible bearish scene should $0.7051 resistance or prime resistance at $0.7849-0.7599 put in an appearance this week. If a $0.6948-0.7242 break lower should come to pass, weekly support at $0.6673 and a 50% retracement at $0.6764 are observable.

After reclaiming space above the 200-day simple moving average ($0.7301) at the tail end of the week, Friday concluded at trendline resistance on the daily timeframe, drawn from the high $0.8007. Ousting trendline resistance will likely have traders bet on the possibility of further outperformance to $0.7660. As you can see, the double-bottom pattern ($0.6991) had its neckline taken ($0.7314) in early March, with the pattern shining light on a profit objective coming in at $0.7660 (seen within the lower limits of weekly prime resistance mentioned above at $0.7849-0.7599). Momentum studies, according to the relative strength index (RSI), rebounded from the 50.00 centreline, action demonstrating positive momentum. Overbought conditions could be registered, with indicator resistance from 74.80 of particular importance.

Outside of the higher timeframes, the H4 recognises Quasimodo resistance-turned support at $0.7349 as a possible ‘floor’ and Quasimodo resistance from $0.7451 to the upside. In terms of the H1 timeframe, for those who read Friday’s technical briefing you may recall the following:

Recognising both weekly and daily timeframes hint at the prospect of additional buying (until at least daily trendline resistance), H1 price retesting $0.7362-0.7367 may be enough to inspire a dip-buying theme.

Weekly resistance at $0.7501 and weekly prime resistance from $0.7849-0.7599 deserve a place on the technical watchlist this week, according to the longer-term trend facing southbound.

Should the daily timeframe’s trendline resistance give way, this delivers an early cue we’re headed for the noted weekly resistances with the possibility of also reaching for the daily double-bottom pattern ($0.6991) profit objective at $0.7660 (within weekly prime resistance).

Retesting $0.74 could be in the offing for the H1 timeframe early week, though traders must prepare for the possibility of dipping lower to test H4 Quasimodo resistance-turned support at $0.7349.

Reaching levels not seen since February 2016, USD/JPY invited additional gains last week. Adding 1.6 percent (MTD 3.6 percent), weekly price is tipped to cross paths with a 1.618% Fibonacci projection at $119.77 this week, complemented by channel resistance, pencilled in from the high ¥110.97. Arranged north of here, we can also see a neighbouring 100% Fibonacci projection at ¥121.14. Despite nearing resistances, it’s important to remain cognisant of where we are regarding trend studies. The overall longer-term trend has been climbing since 2012 (check monthly timeframe). The 21.5 percent correction from June 2015 to June 2016 provided a dip-buying opportunity, as did a subsequent 14.8 percent correction from December 2016 to pandemic lows formed early March 2020. Overall, the primary trend is higher, with the secondary trend promoting additional advances.

The daily chart wrapped up the week in a solid position, threatening to connect with ¥120.11 resistance. 11th March witnessed price breakout above the upper boundary of an ascending triangle pattern (Quasimodo resistance at ¥116.33). Toppling ¥116.33 allowed analysts to chart a pattern profit objective by extending the ‘base’ distance (blue vertical box) from the breakout point to ¥120.11. This, along with weekly price projecting higher levels, informs market participants that USD/JPY may strive to reach ¥120.11 this week. It should be noted, however, that ¥120.11 inhabits territory just above the weekly timeframe’s resistance from ¥119.77.

Between H1 channel support and ¥119, this area may be a location buyers are drawn to early week, targeting ¥119.50 and the weekly timeframe’s Fibonacci resistance at ¥119.77. A move to these noted levels could be followed by ¥120 on the H1 and the daily timeframe’s pattern target at ¥120.11.

It was a good week for sterling, adding 1.07 percent and snapping a three-week losing streak.

However, further buying is questionable. The weekly timeframe crossed swords with prime resistance located at $1.3473-1.3203, and demonstrates scope to drop as far south as weekly support from $1.2719. The longer-term trend also supports additional downside. Trend direction has been southbound since late 2007 tops at $2.1161. As a result, the 25 percent move from pandemic lows in March 2020 to February 2021 may be viewed as a pullback within the larger downtrend. This, of course, places a question mark on the 8.5 percent ‘correction’ from February 2021 to March 2022; it may in fact be the beginning of a longer-term push to the downside and not a dip-buying scenario.

Based on daily analysis, nevertheless, GBP/USD finished the week above $1.3082 resistance. Should the level form support, this builds a foundation to test resistance at $1.3355. Though the relative strength index (RSI) is showing signs of recovery from oversold territory, we must account for the fact that the currency pair continues to operate south of the 200-day simple moving average at $1.3596—a (technical) bearish view.

Despite going against weekly resistance, an alternative scenario to be aware of this week is a whipsaw below $1.31 on the H1 chart into Quasimodo support from $1.3075.