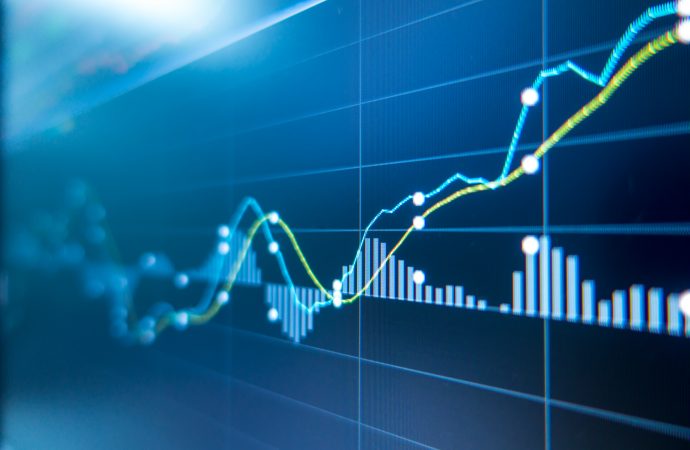 The US dollar, according to the US dollar index (USDX), managed to eke out a modest gain last week, adding 0.6 percent.

Technical structure to be mindful of is Quasimodo resistance at 97.45, located south of the weekly timeframe’s trendline support-turned resistance, taken from the low 78.90. To the downside, attention remains on support from 94.65 this week. The additional observation here, of course, is the gathering of Fibonacci retracement ratios (50.0% is not a Fibonacci level) between 94.44 and 94.87 (green), coupled with trendline support, extended from the low 89.54.

Trend studies reveal a well-defined upward trend since price made contact with support from 89.69 in May (2021), shaped through a series of higher highs and higher lows. The weekly timeframe, nonetheless, shows a long-term range since 2015, fluctuating between 103.82 and 88.25. Rupturing daily support at 94.44-94.87 will, by extension, engulf the 94.63 14th January low and signal an early trend reversal to the downside. Continuation selling, movement overthrowing noted supports, also re-opens the risk of a return to a decision point at 92.71-93.53, an area nearby the 200-day simple moving average at 93.60.

From the relative strength index (RSI), a popular gauge of momentum, the indicator dropped in on support between 40.00 and 50.00 in recent trading, following bearish divergence ahead of overbought territory heading into February. 40.00-50.00 has been centre stage since August 2021, a common view in upward trending markets. Consequently, 40.00-50.00 will likely remain on the watchlists for many traders this week.

Recognising upside strength since 2021, a dip-buying theme could emerge at support from 94.44-94.87 in light of technical confluence present in this area.

Against the US dollar, Europe’s single currency wrapped up the week 0.9 percent lower and trimmed a small portion of the prior week’s 2.7 percent advance.

Fading the lower side of weekly resistance at $1.1473-1.1583 last week, therefore, should not surprise—an active S/R since late 2017. While a break higher may eventually direct the technical spotlight towards weekly supply at $1.1981-1.1848, navigating south is the more likely channel, given the trend. This could have the unit target as far south as weekly Quasimodo support from $1.0778.

A closer examination of price action on the daily timeframe shows early February breached trendline resistance, drawn from the high $1.2254. Although considered a bullish indication, the $1.1483 14th January peak (marked key watch) withstood two upside attempts of late and price remains under its 200-day simple moving average at $1.1661. Most technicians would require a breach of $1.1483 (in addition to the trendline resistance break) to help ‘confirm’ an early trend reversal. Defending $1.1483 has thrown support back in the mix at $1.1369-1.1309, which intersects closely with the recently breached trendline resistance (possible support if tested). A move beyond noted supports signals prime support at $1.1161-1.1199 could be targeted. Momentum studies on the daily chart, by way of the relative strength index (RSI), saw the indicator’s value round off ahead of resistance from 63.66 and test the 50.00 centreline last week. Running below here signals momentum to the downside is gaining traction.

Across the page on the H4 timeframe, last week run into the 61.8% Fibonacci retracement at $1.1475 (green)—provided a technical ceiling since mid-January and is plotted south of resistance at $1.1530. Subsequent movement witnessed Friday slip below support from $1.1386-1.1355, action perhaps clearing the technical runway to prime support at $1.1262-1.1304.

The reaction from weekly resistance at $1.1473-1.1583, in addition to the immediate trend facing lower, has drawn the currency pair into daily support at $1.1369-1.1309 and also placed price on the doorstep of daily trendline resistance-turned support. As underlined above, breaking below here highlights daily prime support at $1.1161-1.1199.

Despite ending the week off best levels, the Australian dollar squeezed out a second week in the green versus the US dollar, rising 0.8 percent.

Out of the daily timeframe, price remains comfortable under its 200-day simple moving average, currently flirting with $0.7362. Structurally, Quasimodo resistance resides at $0.7278, shadowed closely by two trendline resistances, drawn from highs of $0.8007 and $0.7891. Downstream, a familiar decision point is nearby at $0.6964-0.7040, set above Quasimodo support from $0.6901. It may also interest some traders to note that the relative strength index (RSI) journeyed above the 50.00 centreline during last week. Assuming the value secures position above here, this highlights positive momentum (average gains exceeding average losses).

USD/JPY failed to gain acceptance around the 2022 high ¥116.35 and, much like AUD/USD, finished the week off best levels. Candlestick enthusiasts are likely to brand last week’s weekly candle a shooting star, communicating a bearish signal.

Regarding trend, the currency pair has been stepping higher since early 2021. In line with this, the overall longer-term trend has been climbing since 2012. The 21.5 percent correction from June 2015 to June 2016 provided a dip-buying opportunity, as did the subsequent 14.8 percent correction from December 2016 to pandemic lows formed early March 2020. A test of the weekly timeframe’s channel support, drawn from the low ¥102.59, therefore, is structure longer-term traders are likely monitoring.

The daily timeframe’s double-bottom pattern’s (¥113.48) profit objective came within reach of being tested last week at ¥116.63. As you can see, the second half of the week, topped at Quasimodo resistance from ¥116.33. Extending Friday’s 0.47% decline this week positions demand back in the frame at ¥112.66-112.07, an area not only in the company of a 78.6% Fibonacci retracement at ¥112.00 and a 50% retracement from ¥112.55, but also coordinating closely with weekly channel support underlined above. Note the relative strength index (RSI) recently recoiled from support between 40.00 and 50.00 (a ‘temporary’ oversold range since 10th May—common view in trending markets). This suggests positive momentum until overbought levels are tested.

The overall trend in this market favours buyers at the moment. Weekly channel support and daily demand from ¥112.66-112.07, therefore, deliver possible dip-buying structure to watch over the coming weeks.

H1 Quasimodo support-turned resistance from ¥115.48 and the nearby 38.2% Fibonacci retracement at ¥115.52 serve as immediate resistance early week. Overthrowing noted resistances signals short-term strength to the upside, with the expectation for an approach back to ¥116.

Unable to realise direction around the prior week’s upper range ($1.3628), GBP/USD left behind a muted close last week (+0.15 percent).

Trend direction in this market is interesting. Longer term (check monthly timeframe), we have been southbound since late 2007 tops at $2.1161. As a result, the move from pandemic lows in March 2020 may be a pullback within the larger downtrend. This places a question mark on the 7.5 percent ‘correction’ from February 2021 to December 2021; it may in fact be the beginning of a longer-term push to the downside and not a dip-buying scenario.

Daily resistance has taken the spotlight in recent days at $1.3602, organised under the 200-day simple moving average, circling $1.3699. Weakness from here shines light on support at $1.3355, with follow-through downside perhaps throwing Quasimodo support into the mix at $1.3119. Of note, the aforementioned support shares chart space with the weekly timeframe’s double-top pattern’s profit objective at $1.3090. In terms of momentum, the relative strength index (RSI) remains just above its 50.00 centreline, informing traders average gains are exceeding average losses at the moment: positive momentum.

Daily resistance remaining active at $1.3602 indicates a bearish setting this week. Still, traders are urged to note the 200-day simple moving average at $1.3699 in the event buyers make a push.

Overall, though, daily support at $1.3355 calls for attention to the downside.