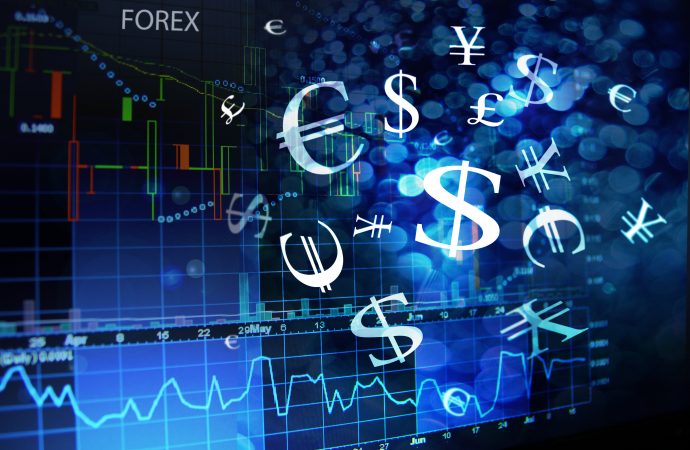 With US elections sparking a risk-on rally (major US equity benchmarks finished strongly higher across the board), safe-haven demand for the US dollar, as measured by the US dollar index (DXY), declined considerably last week.

Down 1.8 percent, the DXY drowned previous gains and crossed paths with daily support at 92.26. Although there’s scope for a recovery off the aforesaid support this week to daily supply forged between 94.02/93.82, shifting to September’s low at 91.74, or perhaps daily support at 90.99, might also be perceived as a possibility.

As underlined in previous analysis, the primary trend on the monthly timeframe, since March 2008, is entrenched within a large-scale pullback. Additionally, the daily timeframe’s trend, since March 2020, constructed a series of lower highs and lower lows.

Following the break of long-term trendline resistance (1.6038) in July, buyers and sellers have since been squaring off around the upper section of supply from 1.1857/1.1352. Whilst this argues additional upside may be on the horizon, targeting ascending resistance (prior support – 1.1641), a dip to retest the recently penetrated trendline resistance (support) is still on the table.

Progressing beyond 50.00, RSI action is also seen potentially preparing to join hands with its overbought range this week.

EUR/USD took on supply at 1.1760/1.1779 (prior demand) on Thursday, as demand for the single currency persisted and eventually gave rise to a trendline resistance (1.2011) break.

RSI bearish divergence forming Friday, however, communicates a potential 1.1850 retest, or a retest of the bullish pennant’s upper edge, before buyers make an entrance.

The months of September and October, as you can see, developed a mild correction and addressed the upper border of demand at 0.7029/0.6664 (prior supply).

Buyers have so far responded well from demand (up by 3.3 percent in November), free to explore as far north as 0.8303/0.8082 in the coming months, a supply zone aligning closely with trendline resistance (prior support – 0.4776).

Elevated amidst upbeat risk sentiment weighing on the DXY, AUD/USD collided with supply at 0.7345/0.7287 in the second half of the week, a rally-base-drop formation. Attention should also be drawn to supply seated just above at 0.7453/0.7384, taken from August 2018, as well as the RSI indicator fast approaching overbought territory after brushing aside resistance at 52.00.

The daily supply highlighted above could potentially hinder upside this week, despite the 7-month long uptrend.

Resistance is seen at 0.7340, for those who feel we’re headed for higher ground this week, while support is tipped to appear around 0.7210 in the event of a dip lower.

Friday’s lacklustre tone fashioned a bullish flag (0.7289/0.7250), arranged a few pips above support at 0.7234 and RSI support around 42.48. Folding over the upper line of the bullish flag this week immediately throws light on 0.73 resistance, with a violation unmasking resistance at 0.7324.

Price action traders will also note we’re caught within a larger ascending channel from the 0.6993 low and 0.7221 high.

On one side of the field, Monthly price is rebounding from demand at 0.7029/0.6664, while on the other side daily sellers potentially prepare for countertrend strategies off supply at 0.7345/0.7287 this week.

H1 is establishing a bullish continuation flag, which could, having noted monthly price trading from demand, be broken to the upside this week and force intraday price movement to take on the 0.73 level on the H1, along with H4 supply from 0.7324/0.7282.

In addition to the monthly chart, daily price forcefully slid through its descending triangle pattern’s support (between 106.94/104.18) on Thursday. Shifting focus back to demand at 100.68/101.85, this area holds within it the descending triangle’s take-profit level at 101.35 (red).

The RSI also recently made its way into its oversold area.

Chart action shows that sustained weakness this week could propel price beyond current demand into another demand area from 101.98/102.63.

Since transitioning into US trading last Thursday, momentum diminished considerably and consequently established a descending channel configuration between 103.85/103.41, with price also pushing through 103.50 support.

Continuing to respect the aforesaid channel’s edges this week is likely to witness H1 work its way towards the 103 level.

It is also worth stressing that although additional bearish flow may unfold, the RSI indicator brings forth bullish divergence, therefore we may even see price try to take on 103.50 resistance before reaching 103.

Blowing through monthly and daily descending triangle pattern supports, along with the buck trading lower since 2017 against the Japanese yen, positions longer-term activity in a bearish stance until at least daily demand from 100.68/101.85, set around the upper edge of monthly demand at 96.41/100.81. 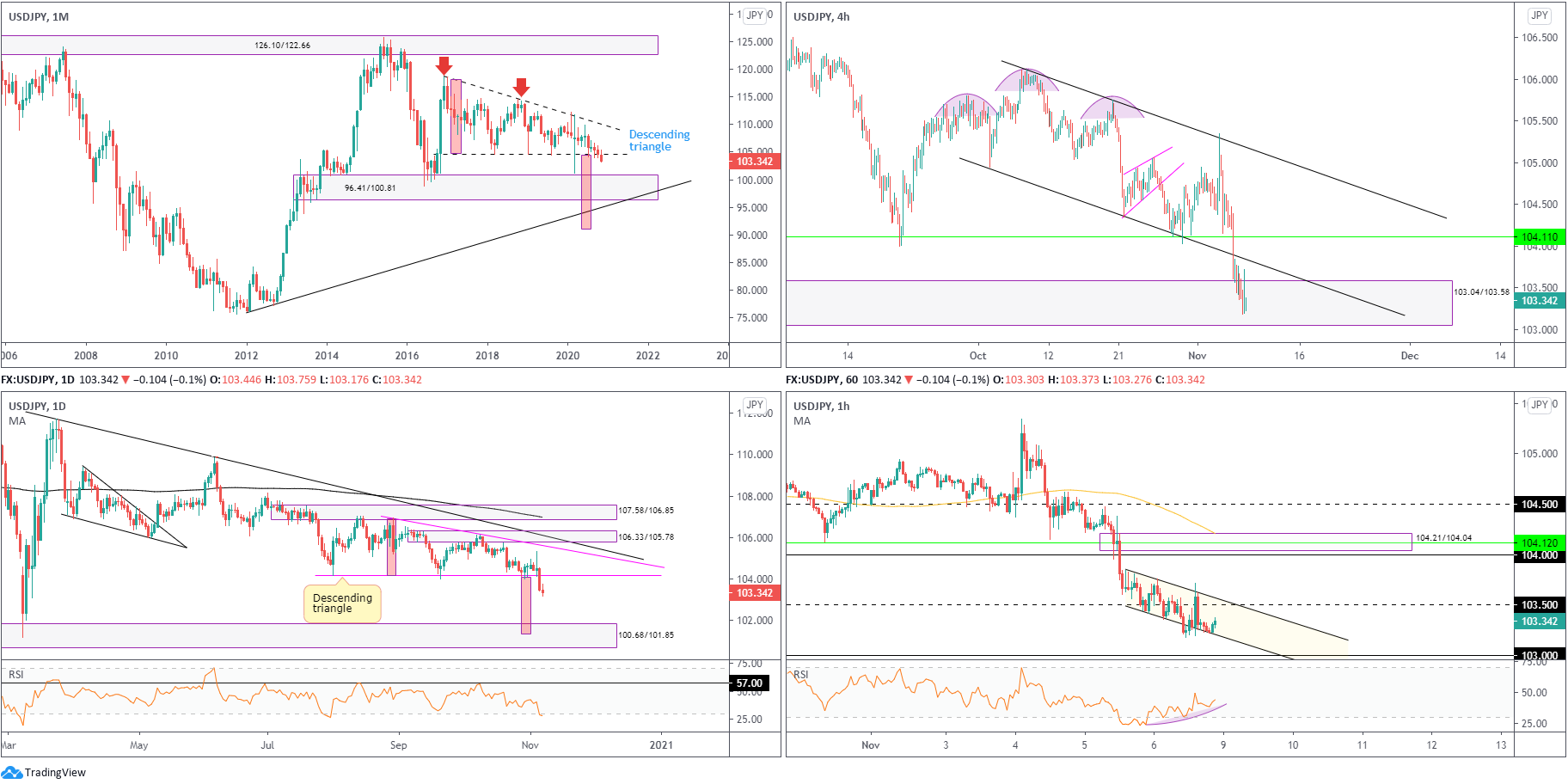 Leaving trendline resistance (2.1161) unopposed, the month of September fell 3.4 percent by way of a bearish outside reversal candle and snapped a three-month winning streak. This, despite November trading higher by 1.5 percent at the moment, advertises a possible dip to retest trendline support (prior resistance – 1.7191).

In spite of Friday’s indecision candle, the fact sellers failed to retest demand at 1.2645/1.2773 on the previous correction from 1.3176 shows what could be interpreted as seller weakness. A 1.3201 resistance break this week lights up the 1.3483 September peak as possible resistance.

The RSI oscillator, as you can probably see, also held off 47.00 support last week.

Lacklustre selling beneath daily resistance at 1.3201 and room for monthly price to move higher could eventually have buyers run through 1.3201.

On account of the above, an intraday bearish scene may unfold around 1.32 this week, though ultimately higher timeframe activity points to an eventual break to higher terrain. 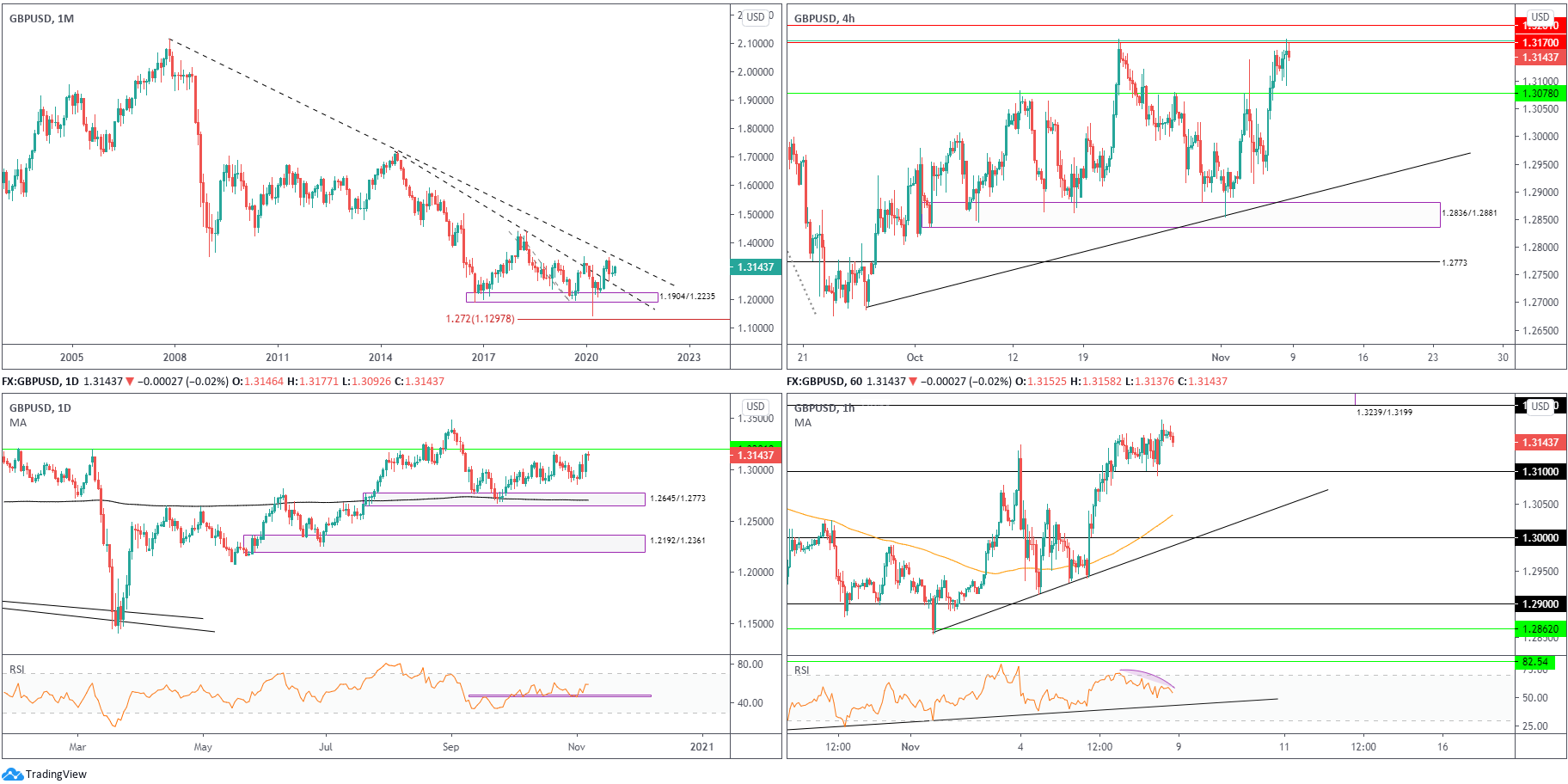