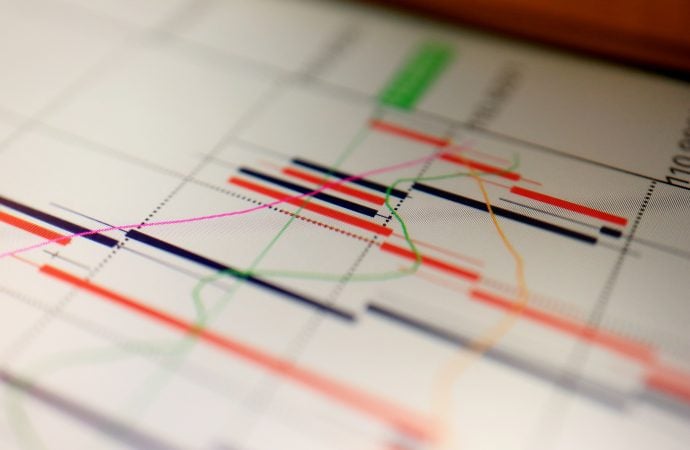 Friday, however, watched sellers make an entrance from a 127.2% Fib projection at 91.44, extended from the 89.20 low. Candlestick enthusiasts will also note Friday’s reaction fashioned a bearish outside reversal, movement that snapped a five-day winning streak.

Although this could influence sellers this week, possibly targeting the 90.04 trough (January 21), resistance at 92.26 is still likely to call for attention, closely followed by a descending wedge (between 94.30 and 92.18) take-profit objective at 92.76 (vertical green boxes).

As outlined in previous research, the greenback has fashioned an unquestionable downtrend since forging a top in the first quarter of 2020 at 102.99. Therefore, January’s pullback is likely to be interpreted as a possible shorting opportunity. Submerging the 88.25 February 16 low (2018) may also help validate the current bearish narrative.

In the context of the RSI indicator, upside momentum subsided heading into the latter part of the week around 65.00, south of overbought territory and channel resistance. This also threatens a correction to test trendline support.

While increased upside towards ascending resistance (prior support – 1.1641) may materialise, an 1.1857/1.1352 retest is also on the cards in view of February’s correction.

Demand at 1.1923/1.2001, together with support at 1.1965 (previous Quasimodo resistance), received price on Friday and pencilled in a bullish outside reversal—similar to the DXY’s bearish outside reversal (note EUR/USD and the US dollar index exhibit an inverse correlation). Upside targets on this scale can be seen around 1.2190 tops.

With reference to the RSI indicator, the value spun higher north of oversold waters heading into the second half of last week. Overhead, aside from the 50.00 centre line, RSI trendline resistance is in view, followed closely by RSI resistance at 60.30.

Friday’s advance, as you can see, reclaimed 1.20+ status in dominant fashion, with subsequent gains toppling the 100-period simple moving average and a Quasimodo resistance at 1.2032.

RSI fans will see the value recorded overbought conditions on Friday, settling within close proximity of resistance at 81.50.

Given the above analysis, buyers interested in the daily timeframe’s bullish outside reversal candle from demand may seek a H4 close above H4 trendline resistance (and H1 supply from 1.2078/1.2062) before pulling the trigger.

January pencilled in a half-hearted shooting star candle formation (often interpreted as a bearish signal at peaks), following two spirited months of gains off demand at 0.7029/0.6664 (prior supply).

February, however, is modestly positive thus far, sparking the possibility of a continuation higher to 0.8303/0.8082—a supply zone aligning closely with trendline resistance (prior support – 0.4776).

Friday, as you can see, wrapped up strongly higher, forming a bullish outside reversal off trendline support (0.5506). Note Friday’s candle engulfed the previous two daily candles.

After a brief spell beneath the 50.00 centreline, the RSI indicator reclaimed space north of 50.00 Friday, signalling the value could reach for RSI trendline resistance this week and possibly venture into overbought space.

The Quasimodo formation at 0.7583 served well as support last week, rebounding price with enough force to draw the currency pair to within touching distance of a Quasimodo resistance at 0.7698. What’s technically appealing about the latter is its Fibonacci connection. A number of Fibs converge around this level between 0.7703 and 0.7683, offering what’s known as an area of confluence.

To the upside, another layer of Quasimodo resistance is also seen at 0.7747.

AB=CD support emerged at 0.7564 early last week and forged a strong floor. Overthrowing 0.76 and retesting the level sparked further buying and formed an AB=CD resistance at 0.7668 into the closing hours on Friday. Additional resistance can be seen at the 0.77 figure.

Assuming sellers make an entrance around AB=CD resistance this week, harmonic traders are likely to monitor the 38.2% and 61.8% Fib retracement levels, derived from legs A-D (this can be applied once a defined top is in place).

The view from the RSI indicator reveals overbought conditions as we enter the second full week of February, with resistance plotted at 80.85.

The H4 chart displays weighty resistance between 0.7703 and 0.7683, perhaps causing a problem for buyers early this week. On top of this, H1 is currently shaking hands with AB=CD resistance.

A H1 close above 0.77, nevertheless, is likely to add bullish conviction (in line with the higher timeframe picture), prompting additional bullish flow towards at least H4 Quasimodo resistance from 0.7747.

Since January snapped a four-month bearish phase in the shape of a bullish engulfing candle, buyers remain on form in February north of support at 101.70.

As evident from the daily timeframe, USD/JPY snapped a seven-day winning streak on Friday, gleaning resistance from the lower side of supply at 106.33/105.78 and a 200-day simple moving average at 105.59.

Technical eyes may also be drawn to the RSI indicator, which recently registered an overbought climate.

In conjunction with the daily timeframe recently crossing swords with supply and the 200-day simple moving average, the H4 chart bumped heads with an alternate AB=CD bearish pattern at the 127.2% Fib extension level from 105.63.

Momentum—measured by the RSI oscillator—crossed beneath the 50.00 centreline on Friday, implying the unit could be bound for oversold conditions this week.

January’s bullish engulfing candle has clearly encouraged some buying in the market, though whether buyers book further gains in the face of the daily supply (106.33/105.78) and 200-day simple moving average is difficult to estimate.

In light of the above analysis, technicals suggest sellers have the upper hand in the short term, in which we may see the 105 figure tested on the H1, and with a little oomph, possibly also the 38.2% H4 Fib level at 104.50.

Largely unchanged from previous analysis due to lacklustre performance –

Despite a strong-willed advance materialising Friday, resistance at 1.3755 remains a ceiling buyers have been unable to penetrate since January 21. Breaching the latter this week, however, brings light to supply at 1.3996/1.3918.

The RSI indicator has revealed a rangebound environment since November, limited by support around 47.00 and resistance at the 66.00 region (the value stands at 58.00). It is common to see higher oversold support areas form in an uptrend.

The Quasimodo formation at 1.3572 proved effective support in the second half of last week, with Friday touching gloves with peaks at 1.3740.

For those who read Friday’s technical writing you may recall the following point (italics):

As evident from the H1 chart, price did indeed dethrone 1.37 and came within touching distance of the Quasimodo resistance registered at 1.3751.

RSI enthusiasts may also note the line hovering within a stone’s throw from overbought territory.