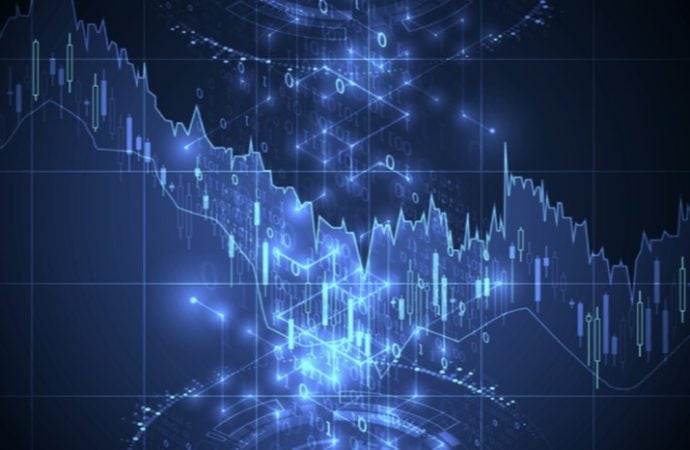 Daily support at 92.26, an active S/R level on the US dollar index (DXY) since late 2017, commanded attention early last week, albeit suffering a whipsaw to YTD lows at 91.75.

Recovery gains from the aforesaid support, as you can see, extended into the week’s close, consequently throwing light on the upper border of a daily falling wedge pattern (93.91/92.55). A falling wedge can represent either a reversal or continuation signal. In this case, assuming a convincing breakout to the upside this week, the falling wedge puts forward a reversal signal and may have the buck seek higher levels.

Traders with a focus on momentum-based indicators will acknowledge the RSI oscillator has produced a series of higher lows/highs after bottoming at 17.50 heading into August, suggesting bullish divergence. Concerning the 200-day simple moving average, circling 97.40, the dynamic value continues to curve lower, two years after mostly drifting higher.

August nudged to a fourth successive monthly gain against the US dollar, adding nearly 1.5 percent. The move also toppled long-term trendline resistance (1.6038) and supply from 1.1857/1.1352. This argues additional moves to the upside may be on the horizon, with trendline resistance (prior support – 1.1641) on the radar as the next target.

What could potentially hamper upside, though, is the primary downtrend (since July 2008) which remains intact at least until 1.2555 is engulfed (Feb 1 high [2018]).

Tuesday, as seen on the chart, shaped a robust shooting star candlestick formation off YTD peaks at 1.2011, a move that pierced through the aforementioned channel resistance and tested the range of current supply. Heading into the second half of the week, sellers offered a non-committal tone, with Thursday and Friday’s sessions wrapping up off worst levels and forming hammer candlestick patterns.

Trendline support (1.0774) currently intersects with the aforesaid channel support, potentially reinforcing the area in the event a pullback/retest emerges this week. On the other hand, immersing the aforementioned supply favours moves to as high as resistance at 1.2095.

Newly formed supply 1.1878/1.1851 is proving stubborn, with additional backing from another area of supply at 1.1884/1.1908, a prior demand area. Burrowing to lower levels this week potentially welcomes demand at 1.1682/1.1716 back into position, yet taking over the two aforesaid supply areas throws light on resistance at 1.1988.

Momentum, as shown via the RSI oscillator, sent across bullish divergence Friday and ended the week around the 50.00 mid-way point.

The scope for manoeuvre is limited on the H4 timeframe between supply at 1.1878/1.1851 and trendline support. In addition, H1 offers a 60-pip range to work with this week between supply at 1.1880/1.1860/1.18. As such, given the direction of the current trend, buyers are likely to watch for bullish strategies to form around the lower edge of the current range this week.

Also of particular interest is the 1.1750 support on the H1 timeframe; the level shares space with merging daily channel support (1.1695) and trendline support (1.0774), offering reasonably appealing bullish confluence should we reach this far south.

July, coupled with August’s 3.3% follow-through, witnessed supply at 0.7029/0.6664 and intersecting long-term trendline resistance (1.0582) abandon its position. Technically, buyers appear free to explore as far north as 0.8303/0.8082 in the coming months, a supply zone aligning closely with trendline resistance (prior support – 0.4776).

Although Friday concluded significantly off worst levels, extending the recent retracement slide could lead to demand at 0.7131/0.7192 making an entrance this week, a drop-base-rally area.

The trend, according to the daily timeframe, however, has been higher since bottoming in late March. Indicator-based traders will also note the RSI visibly exited overbought space and is now poised to approach support around 53.00.

Demand at 0.7216/0.7240 arrived on the scene late Friday with price action forming a healthy hammer candlestick pattern, a bullish configuration pulling things back to supply at 0.7300/0.7282. Note, however, the closing H4 candle produced a shooting star pattern from the aforesaid supply, a bearish signal.

US trading on Friday had sellers step aside as price welcomed a 61.8% Fib level at 0.7241 (green). The intraday advance climbed above 0.7250 resistance and mildly eclipsed earlier peaks set in London at 0.7296.

As for the RSI indicator, 54.00 has proven a stable area of support and resistance since August 25, therefore given the recent test as resistance, momentum could potentially fade in early movement this week.

Taking in the above, reacting from H4 supply this week could send price as low as 0.72 on the H1, aligning not only with the upper border of daily demand from 0.7192 but also with trendline support on the H4 timeframe, from 0.7076. 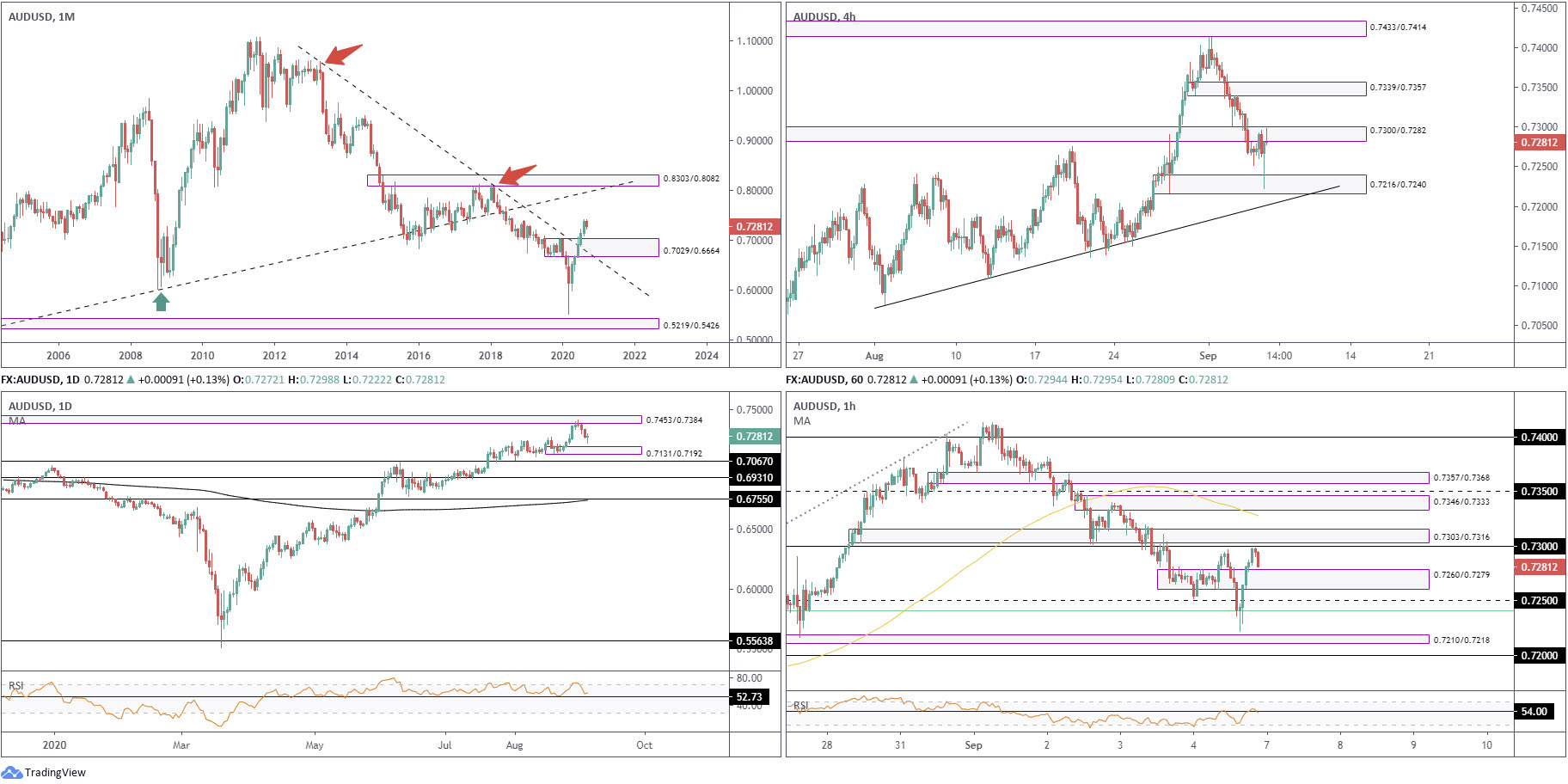 Following the recently completed ABCD bearish structure at 106.46, combined with trendline resistance (105.10 – prior support), buyers have struggled to find any significant demand. Seeking higher levels this week, nevertheless, focuses attention on the 106.94 high (August 28), as well as supply at 107.37/107.17, followed by another supply stationed at 107.60/107.42.

106.50 elbowed into the limelight Thursday as resistance, with Friday also revisiting the base. This, together with H4 ABCD resistance and trendline resistance, delivers powerful intraday confluence to work with this week.

In terms of where we stand concerning the RSI oscillator, the value marginally dipped south of 50.00 Friday after peaking just ahead of overbought status.

The ABCD reaction on the H4 could force price beyond the current H1 trendline support to revisit 106 this week, a move likely to persuade current ABCD sellers to partially cash in on profits. However, follow-through selling is also possible to H4 demand at 105.57/105.76 (essentially representing the same range as H1 demand at 105.55/105.73). 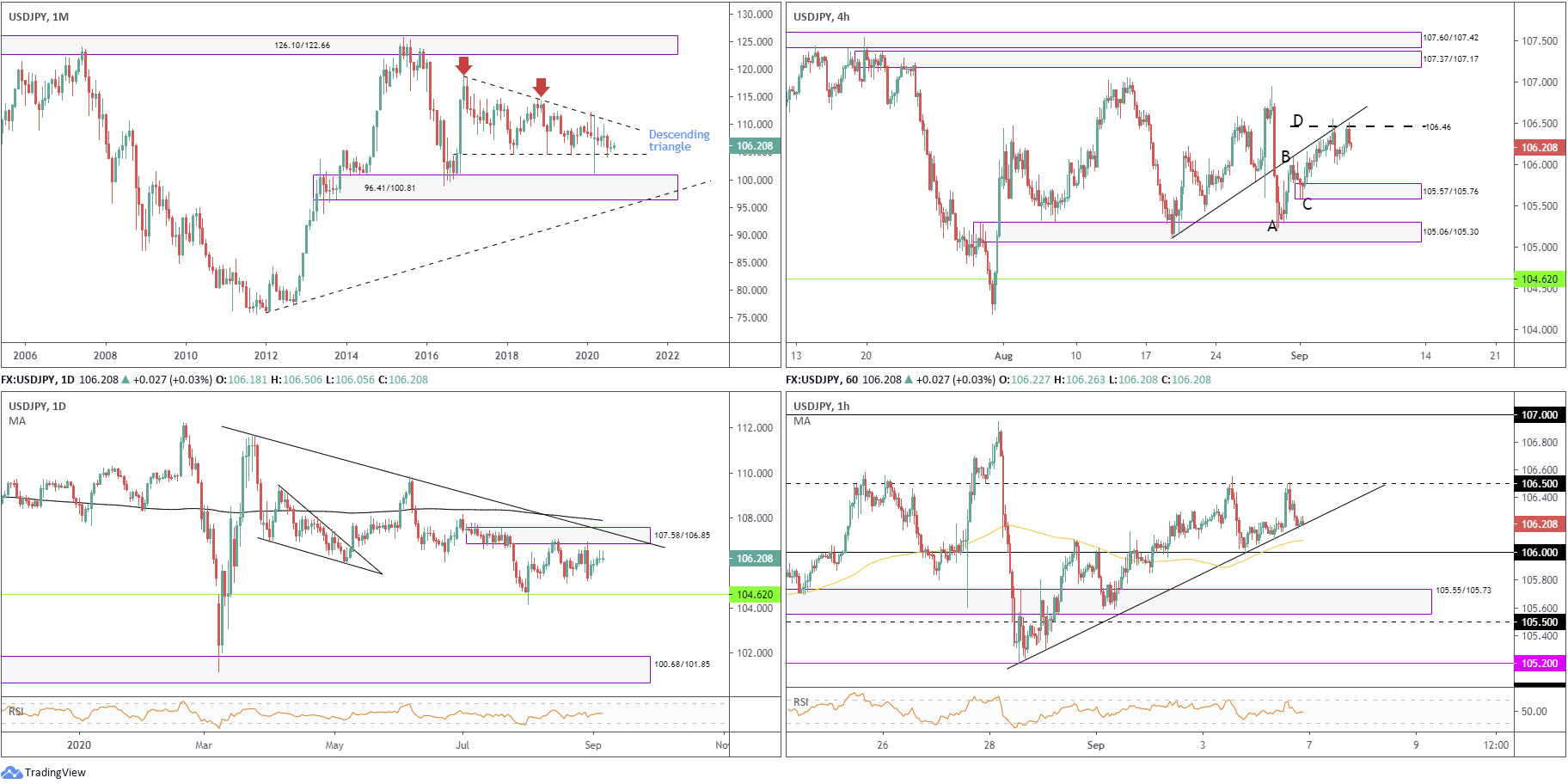 After engaging with the 161.8% Fib ext. level at 1.3408, movement that embraced fresh year-to-date peaks at 1.3483, GBP/USD adopted a mild bearish tone last week. Support at 1.3201 shifted back into view Friday, with price generating a solid recovery off worst levels to end the session unchanged.

Sterling suffered amid European trading Friday, travelling from a peak at 1.3319 to weekly lows at 1.3175 against the US dollar. After bumping heads with 1.32 into the US session, demand for the pound increased, witnessing moves above 1.3250 to position the pair within a stone’s throw from 1.33 and intersecting trendline resistance (1.3482).

Meanwhile, the RSI, following a decisive recovery from oversold waters, modestly reclaimed 50.00 by the week’s close.

Longer term, the monthly chart suggests buyers have some fuel left in the tank, with monthly action looking towards trendline resistance (2.1161) and daily recently taking on support at 1.3201.

However, a pullback from the 1.33 region to 1.3250 would still not surprise, having seen GBP/USD respond well to H1 trendline formations over the years. Ultimately, however, higher timeframe pressure is likely to pull price above 1.33 this week, possibly igniting intraday breakout signals to take out H4 supply (as well as 1.3350 resistance and H1 supply at 1.3383/1.3365) and push for at least the 1.34 region (next daily resistance target also rests around 1.3408 – Fib ext.).