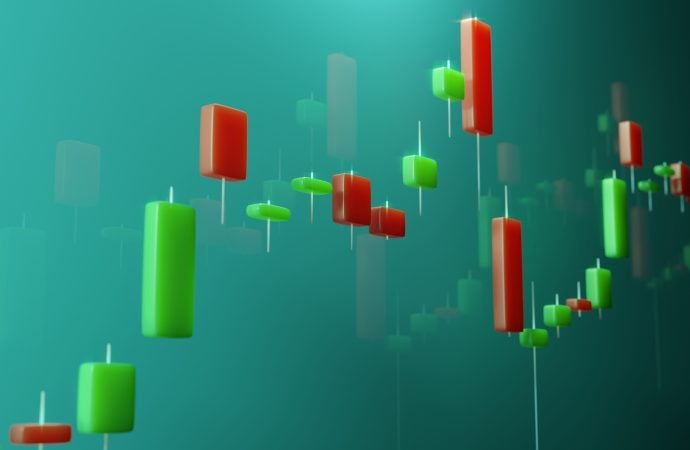 Against a basket of six foreign currencies, the US dollar plunged 1.8 percent last week and engulfed the prior week’s gains.

Following a peak just shy of Quasimodo resistance from 97.45, price slipped under trendline support at the tail end of the week, taken from the low 89.66. Friday’s subsequent retest of the aforementioned line cooks up the possibility of support making an entrance from 94.65 this week. The additional observation here, of course, is the gathering of Fibonacci retracement ratios (50.0% is not a Fibonacci level) between 94.44 and 94.87 (green). Continuation selling, on the other hand, movement overthrowing noted supports, re-opens the risk of a return to a decision point at 92.71-93.53, an area housing the 200-day simple moving average at 93.48.

Trend studies on the weekly timeframe show an indecisive market since 2015, fluctuating between 103.82 and 88.25. The daily timeframe, though, has displayed an upside bias since price made contact with support from 89.69 in May (2021), shaped through a series of higher highs and higher lows. Rupturing support mentioned above at 94.44-94.87 will, by extension, also engulf the 94.63 14th January low and signal an early trend reversal to the downside.

From the relative strength index (RSI), a popular gauge of momentum, the indicator dropped in on support between 40.00 and 50.00 in recent trading, following bearish divergence ahead of overbought territory. This area has been centre stage since August 2021, a common view in upward trending markets. Consequently, 40.00-50.00 is an area traders will likely continue to monitor.

It’s been quite a week for Europe’s shared currency, chalking up a spirited advance against the greenback. Adding 2.7 percent and reclaiming 2022 downside, demand for the euro came on the heels of ECB President Lagarde’s surprisingly hawkish comments on Thursday, acknowledging inflation risks are ‘tilted’ to the upside and that it’s no longer sensible to exclude a rate move in 2022.

EUR/USD, according to the weekly timeframe, concluded the week on the doorstep of long-standing resistance at $1.1473-1.1583. Not only has this base echoed active S/R since late 2017, it’s an area that entertained a bearish showing early January. Despite the pullback, long-term technicians will note trend studies have communicated a bearish environment since topping at $1.2350 at the beginning of January (2021). This is reinforced by the monthly timeframe’s long-term (some would say ‘primary’) downtrend since mid-2008.

A closer reading of price action on the daily timeframe shows the currency pair journeyed above an 8-month trendline resistance on Thursday, extended from the high $1.2254, and annihilated a decision point from $1.1369-1.1309. This is considered an early trend reversal signal on the daily chart.

Going forward, still on the daily chart, those who read Friday’s technical briefing may recall the research team underlined the importance of the $1.1483 14th January peak (marked key watch), which entered the frame Friday and modestly rejected the unit. An additional point of importance here is the relative strength index (RSI) hovering within a stone’s throw of indicator resistance at 63.66. Based on the daily scale, a $1.1483 break further promotes the possibility of a trend change and potentially ignites an approach to Quasimodo resistance at $1.1667, shadowed by the 200-day simple moving average at $1.1677. A $1.1483 decisive rejection, on the other hand, tips the technical weight back to recently breached resistances.

The technical landscape on the H4 timeframe has buyers and sellers squaring off around the 61.8% Fibonacci retracement ratio at $1.1475, a level sharing chart space with the high $1.1483 highlighted on the daily timeframe. A turn lower from $1.1475 swings support at $1.1386-1.1355 in sight, while buyers strengthening their grip casts light on resistance at $1.1530 (a previous Quasimodo support level).

Aligning closely with the $1.1483 high is H1 Quasimodo resistance at $1.1481, arranged just under $1.15. Following an earlier turn from $1.1481, the currency pair immediately pursued lower levels after strong payrolls data out of the US on Friday. This, amid early US hours, observed price shake hands with Quasimodo resistance-turned support at $1.1416, which not only intersects with ascending channel resistance-turned support, drawn from the high $1.1330, but was also confirmed by a rebound from the 50.00 centreline on the H1 chart’s RSI.

The combination of a soft market since January 2021, as well as the lower side of weekly resistance at $1.1473 and the $1.1483 14th January peak (daily), signals a bout of profit taking could emerge this week.

The H4 timeframe’s 61.8% Fibonacci retracement ratio at $1.1475 was reasonably well received Friday, and could aid the bearish outlook seen on the bigger picture.

Despite this, dip-buying visible from H1 support at $1.1461 directs the technical radar to $1.15, a psychological level arranged just under H4 resistance at $1.1530. With this, $1.1530 and $1.15 represents a resistance zone to be mindful of this week that may enter the frame prior to any selling.

Friday watched the Australian dollar sink 0.9 percent against its US counterpart in response to stellar job’s data out of the US, consequently erasing a large portion of the week’s upside. Earlier in the week the Reserve Bank of Australia (RBA) kept its cash rate unchanged at 0.1 percent and announced the end of its bond-buying programme.

Against the background of higher timeframe flow, H4 resistance at $0.7169-0.7187—set within the walls of daily prime resistance at $0.7196-0.7151—made an entrance on Thursday and delivered a clear shooting star candle pattern (bearish signal).

Technically aided by the H1 timeframe’s prime resistance at $0.7177-0.7164, fastened to the lower edge of the H4 base, subsequent movement navigated through the $0.71 neighbourhood and recorded an intraday bottom ahead of H1 support at $0.7042 (housed within H4 support at $0.7046-0.7023). Technicians will also note the H1 RSI stabbed oversold terrain and recovered to around 40.00ish into the close.

$0.7196-0.7151 holding a strong offer into the close, together with the daily decision point at $0.6964-0.7040 pushing through a fragile tone and weekly prime support failing to drive much of a bullish response since late 2021, highlights further selling this week.

The $0.71 figure on the H1 deserves notice early week. However, traders considering a bearish theme from the psychological level are urged to pencil in the possibility of a whipsaw to H1 Quasimodo support-turned resistance at $0.7115. A successful test of the latter and subsequent close back under $0.71 will likely have short-term flow, supported by higher timeframe direction, take aim at H1 support at $0.7042 (placed within H4 support at $0.7046-0.7023).

The US dollar against the Japanese yen left behind a muted close last week, though did manage to sketch a range between ¥115.59 and ¥114.15.

As expected, ¥115 on the H1 failed to ignite much selling pressure on Friday despite the psychological base housing healthy (technical) confluence (trendline support-turned resistance, drawn from the low ¥113.47 [since breached], trendline resistance, pencilled in from the high ¥115.67 [since breached], a 61.8% Fibonacci retracement at ¥115.11 [since removed] and the relative strength index [RSI] recording overbought conditions).

The ¥115 breach was largely due to the higher timeframes highlighting a bullish narrative:

With ¥115 stepping aside Friday—fuelled on the back of a stronger-than-expected payrolls print—and a local trendline support forming (drawn from the low ¥114.16) as well as prime support presenting itself from ¥114.90-115.01, H1 resistance at ¥115.68 could be challenged early week, followed by ¥116.

The long-term trend is to the upside; however, the weekly timeframe’s 1.272% Fibonacci projection from ¥116.09 remains a technical headwind to be mindful of this week.

Shorter-term timeframes are aligned with the bigger picture.

The H4 scale shows a possible AB=CD bearish configuration in the direction of daily Quasimodo resistance at ¥116.33. This, therefore, leaves the H1 chart open to retesting ¥115—complemented by trendline support and prime support at ¥114.90-115.01—with a rebound likely to zero in on at least H1 resistance at ¥115.68.

Four out of five days decorated the chart with bullish candles last week. Aside from Friday spinning lower from daily resistance at $1.3602, weighed by latest US employment data defying economists’ forecasts, the week benefitted from the Bank of England (BoE) kicking interest rates higher to 0.5 percent, in response to rising inflation.

Technically, trend studies remain unchanged. Despite the 7.5 percent dip from ‘double-top’ peaks at 1.4250ish, the weekly timeframe has been higher since early 2020. However, it’s important to recognise that while the trend on the weekly timeframe demonstrates an upside bias, the monthly timeframe’s long-term trend has been lower since late 2007.

$1.3602 making a show at the tail end of the week on the daily chart, in addition to H4 resistance putting in an appearance at $1.3622-1.3646 and the H1 whipsawing above $1.36 (a number of buy-stops are likely to have been tripped as a result of this move which was witnessed alongside RSI [relative strength index] bearish divergence), guided action lower, as expected. Friday dragged H4 to within reach of Quasimodo resistance-turned support at $1.3498, and with H1 resistance serving the chart during US trading at $1.3549, the $1.35 figure on the H1 is also now nearby. This consequently moved the H1 RSI into oversold territory, and has since recoiled to 40.00ish.

Daily resistance is a key note at $1.3602. Friday’s reaction unlocks the possibility of follow-through downside towards daily support at $1.3355. A break of the latter could also eventually throw light on a test of the weekly timeframe’s double-top pattern ($1.4241) profit objective at $1.3090ish, which is close by daily Quasimodo support at $1.3119.

$1.35 on the H1 is likely to interest early week, having noted its connection with H4 Quasimodo resistance-turned support at $1.3498. However, recognising the daily timeframe responded from resistance at $1.3602 last week could cap upside attempts from shorter-term levels, and force H1 towards trendline resistance-turned support (drawn from the high $1.3743) and a decision point at $1.3441-1.3459 (glued to the upper edge of H4 support at $1.3428-1.3444).