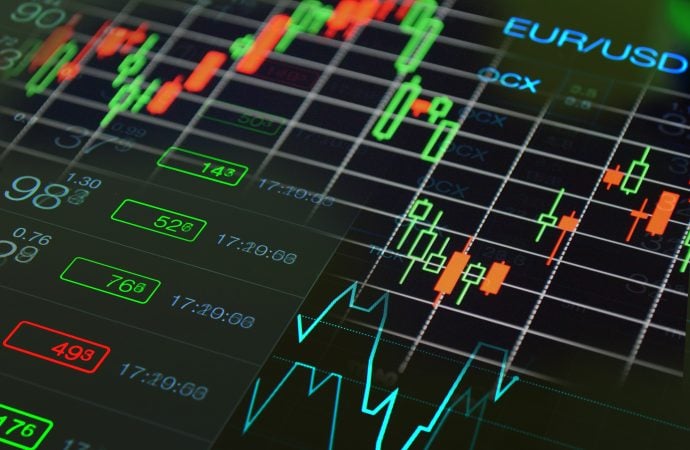 The recovery from daily support at 95.84 and daily AB=CD pattern completion at 96.16 (the latter is regarded as a basic bullish configuration among harmonic traders) has placed price action within close proximity to daily supply at 98.18/98.65. Traders will also note the recovery is establishing what appears to be a bear flag between 95.72/97.45.

In addition to the above (as featured in recent weekly reports), late May witnessed price push through the lower limit of a large bearish pennant configuration (98.27). Traders following this pattern, therefore, may still acknowledge the possibility of moves eventually forming as far south as 93.97: the pennant take-profit target, measured by taking the preceding move and adding the value to the breakout point (yellow).

As you can see, bid/offers appeared relatively even last week and the aforesaid Fib targets have yet to be met.

An extension to the upside amid Asian trading and the early hours of Europe Thursday threw channel resistance (1.1422) into view. Optimistic US non-farm payrolls data provided fresh USD impetus, weighing on EUR/USD from this point.

Friday’s lack of liquidity, due to the Independence Day holiday in the US, witnessed price action exhibit a non-committal tone. Consequently, demand from 1.1189/1.1158 (prior supply) remains in view this week, as does resistance at 1.1348, in the event we push through channel resistance.

Buyers took a back seat under 1.13 Thursday, aided by upbeat US employment data. Volatility levelled off under 1.1250 and the 100-period simple moving average into the close.

Friday scored a session low at 1.1219 mid-way through London, though recovered earlier losses into US trade to marginally dethrone the 100-period simple moving average. 1.1250 resistance, nevertheless, remains unbroken heading into the new week. Above the latter, consumed supply is evident to the left of price, perhaps clearing the path back to 1.13. Lower on the curve, focus points to demand at 1.1181/1.1202 (glued to the upper edge of H4 demand at 1.1189/1.1158).

In line with higher-timeframe direction, intraday bearish strategies off 1.1250 may be on the table for some traders this week on the H1. A break back beneath the 100-period simple moving average will likely see increased interest. 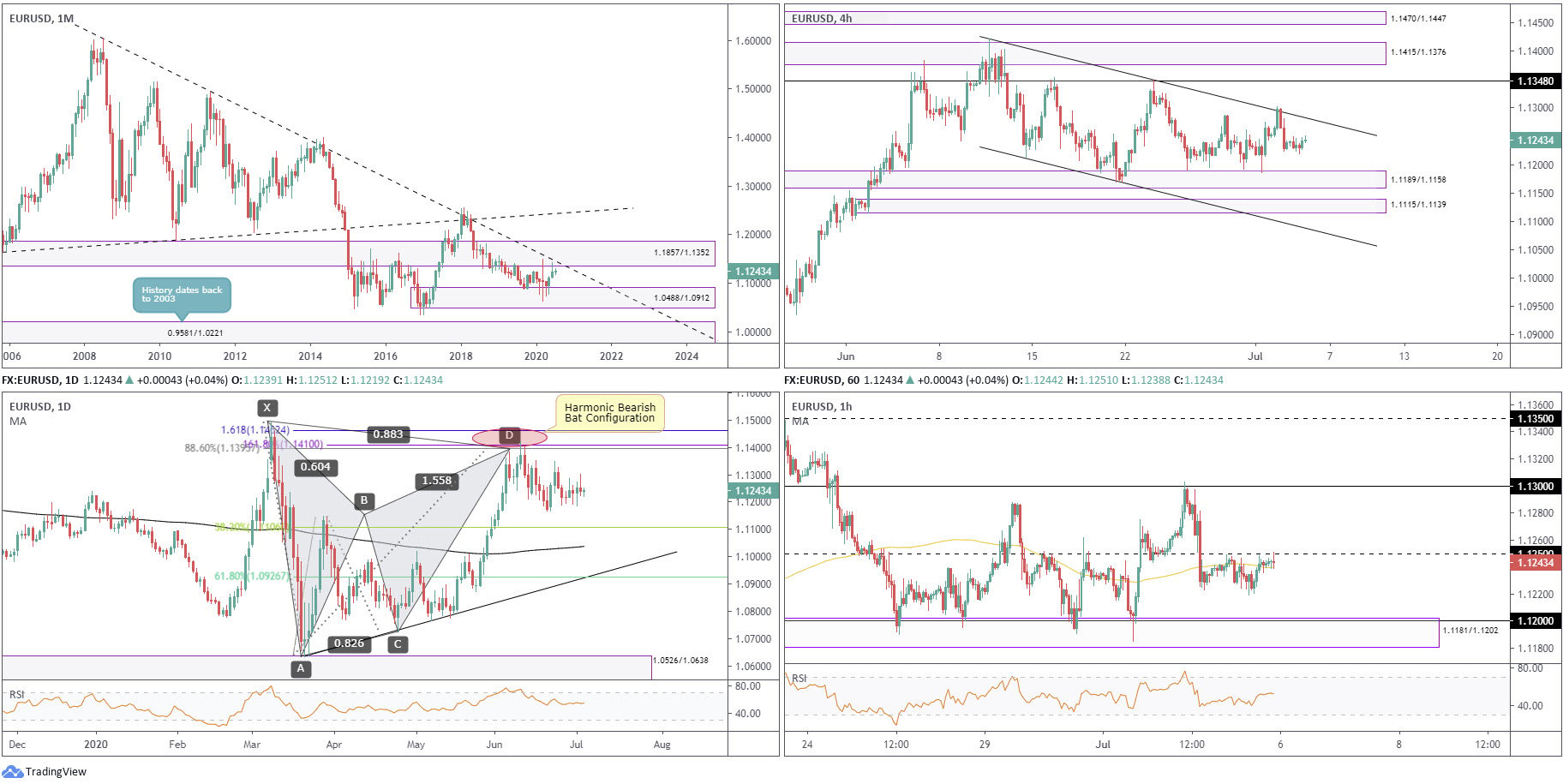 May’s extension, together with June’s follow-through, has supply at 0.7029/0.6664 echoing a vulnerable tone at the moment, particularly as an intersecting long-term trendline resistance (1.0582) shows signs of giving way.

Following a period of hesitation, AUD/USD bulls made an entrance last week, with recent price swinging above 0.6931 resistance.

The break to the upside shines this week’s focus on two trendline resistances inhabiting territory close by (prior supports – 0.6744/0.6671), with a break unmasking another resistance at 0.7197.

Failure to maintain a position above 0.6931 will throw light back on support at 0.6755. Traders will also note the 200-day simple moving average at 0.6668 lurks just south of here, a dynamic value in the process of flattening following months of drifting lower.

Since June 10, H4 has been in the process of establishing a (bullish) pennant pattern between 0.7064/0.6776, generally considered a continuation pattern among chart pattern traders. As you can see, the pair mildly advanced Thursday, penetrating the upper boundary of the aforesaid pennant and shortly after retesting the base as support.

Friday, despite decreased liquidity across the board due to the US holiday, modestly extended Thursday’s retest, consequently positioning bulls in a favourable position going into the week.

With the help of optimistic US employment data, intraday tagged 0.6950 resistance Thursday and rushed trendline support (0.6832). This also put in a near-test of 0.69.

According to the monthly timeframe, although we’re still trading within supply at 0.7029/0.6664, price is testing waters above a connecting trendline resistance, stressing a mild bullish tone. This is further confirmed on the daily timeframe after crossing resistance at 0.6931.

As for the H1 timeframe, intraday traders are still likely zeroing in on 0.6950 resistance. A break of this region adds weight to the pair’s upward bias and, ultimately, provides a signal to consider longs. Do keep in mind, however, H1 displays stacked supply nearby, covering 0.7003/0.6987 and 0.6994/0.6968.

Despite failing to connect with the 200-day simple moving average at 108.37 last week, upside momentum came to an abrupt halt Wednesday and fashioned a bearish outside day. For that reason, given Thursday and Friday’s lacklustre performance, light still shines on a possible run back to demand at 105.70/106.66 this week.

Traders went head to head at resistance at 108.09 in the early stages of Wednesday last week, with sellers dwarfing buyers.

Price action established a mild bottom ahead of demand at 107.03/107.28 Thursday, with little movement occurring Friday as US banks shut their doors due to Independence Day. The 107.03/107.28 area, therefore, remains a key base heading into the new week, a zone which represents a decision point that broke through the 107.45 and 107.64 peaks. It should also be noted we have a trendline support lurking just beneath the zone (106.58).

Thanks to thinned-holiday trading, short-term technical movement on the H1 recently engaged in some serious chop around 107.50. Also close by is supply at 107.71/107.58 and the 100-period simple moving average.

Space above 107.71/107.58 underlines possible moves to as far north as the 108 level, while dips could have demand at 107.16/107.26 make a show. This area is particularly alluring, owing to the momentum delivered out of its base and the levels the movement breached, including 107.50.

Monthly price remains contained within the limits of its descending triangle, with no sign of a break occurring anytime soon. The daily timeframe has eyes for demand at 105.70/106.66 this week, but as things stand on the monthly timeframe (indecisive), a turn higher to test the 200-day simple moving average at 108.37 is also not out of the question.

H1 sellers are unlikely to commit under 107.50 owing to the top edge of H4 demand set close by at 107.28. On account of this, chart studies still suggest current H4 demand is located in a favourable position (H1 demand resides within at 107.16/107.26), with plenty of sellers (liquidity) to buy into. 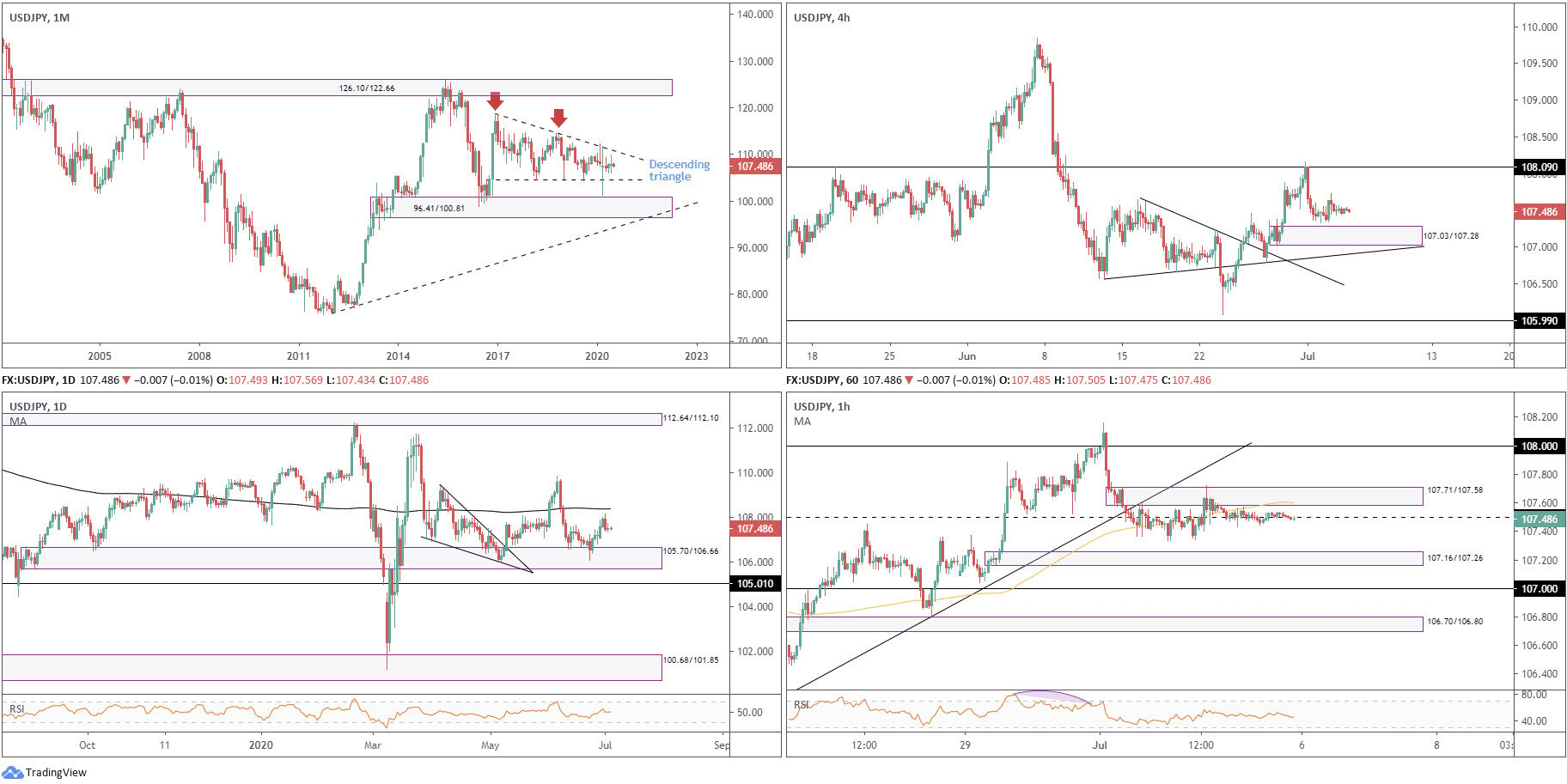 Support at 1.1904/1.2235 and long-term trendline resistance (1.7191) remains clear structure on the monthly timeframe at the moment, with the latter prompting a notable upper shadow in June.

Concerning the primary trend, lower peaks and troughs have decorated the monthly chart since early 2008, essentially placing 1.1904/1.2235 in a vulnerable position.

Demand at 1.2192/1.2361 recently received price action, stirring a notable bid and consequently chalking up two back-to-back bullish candles (Tuesday/Wednesday), each closing just shy of best levels. Current demand, as underscored in recent analysis, is an area not only fastened to the top edge of monthly support, it is also considered the decision point that broke 1.2647 (April 14 high).

Thursday, however, answered back with a shooting star candlestick configuration, generally considered a bearish reversal signal, with Friday responding indifferently. The 200-day simple moving average at 1.2681, in the event buyers regain consciousness this week, is likely marked as the next available resistance on this timeframe.

Friday’s session, albeit mellow due to Independence Day in the US, recognised a mild degree of support off 1.2453. Whether this is enough to address Thursday’s highs or supply at 1.2652/1.2544 is difficult to determine at this point.

Chart pattern traders, Friday, were greeted with a head and shoulder’s top pattern (1.2490/1.2530/1.2486), formed around the underside of the 1.25 level. The neckline connected to the pattern (1.2460) aligns with 1.2450. As you can see, both the aforesaid levels faced downside attempts Friday, though price failed to secure a decisive close lower. Although some traders may consider the recent penetration of the neckline a signal to short, a H1 close under the neckline is what most technicians will be looking for.

What we have now, assuming we dip lower from current prices today, is perhaps a complex head and shoulder’s pattern forming – essentially two right shoulders.

A close beneath the neckline unmasks demand at 1.2415/1.2386 (prior supply), an area holding the 1.24 level within and aligning with a 100-period simple moving average.

Aside from the clear downtrend the pound remains in, the technical construction on the monthly chart has price action sandwiched tightly between the support area at 1.1904/1.2235 and trendline resistance.

Thursday’s shooting star on the daily timeframe is perhaps still of interest for many traders this week, despite Friday’s lack of enthusiasm.

H4 has price action engaging support at 1.2453, while H1 displays scope to form a complex head and shoulder’s top.

Therefore, we have two diverging opinions in the short term. Longer term has the daily timeframe suggesting sellers have a slight advantage while monthly, although trending lower, is currently involved in a tight range, offering limited directional cues right now. 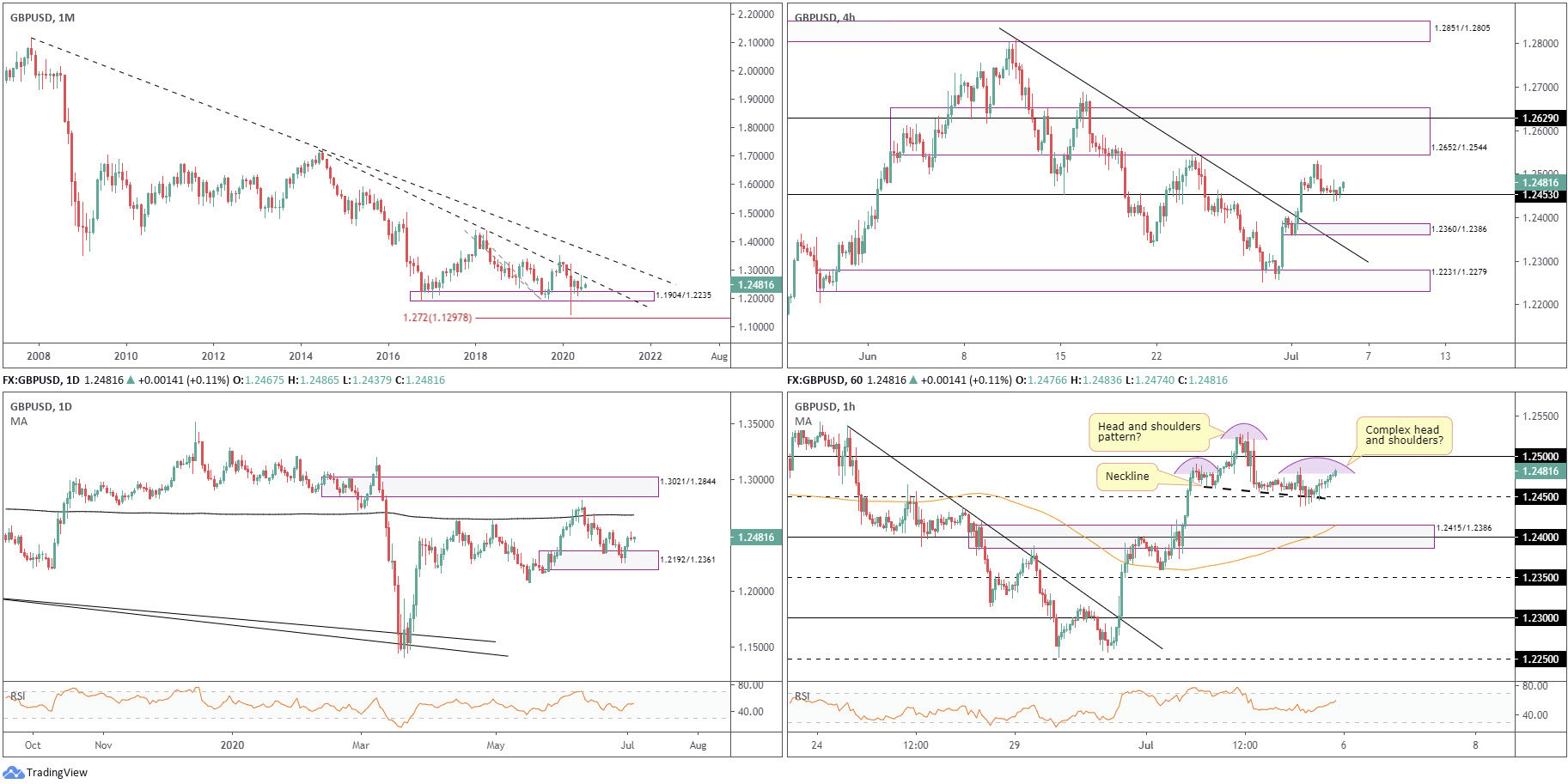