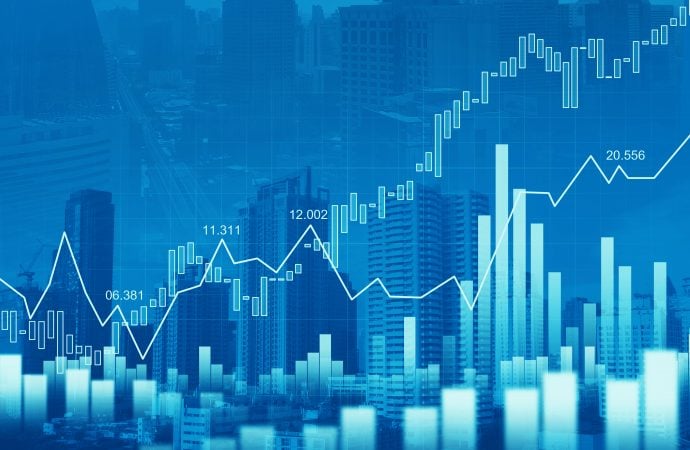 Early week, the US dollar, as measured by the dollar index (DXY), tumbled lower from an interesting combination of daily resistance, consisting of 94.65 resistance (March 9 low), a trendline resistance (102.99), an ABCD resistance at 94.63 (together with a 2.0 BC projection at 94.58) along with hidden bearish divergence out of the RSI indicator.

Erasing 0.8 percent, the DXY greeted trendline support (prior resistance – 93.99) heading into the second half of the week, conveniently tucked just ahead of another trendline support (91.75). The lack of follow-through buying observed Friday (forming a shooting star candle pattern) indicates additional selling could be in store this week, in line with the current trend, trading lower since topping in March at 102.99. Squeezing through the aforesaid trendline supports, therefore, throws light on familiar support at 92.26.

With respect to the the 200-day simple moving average, circling 97.01, the dynamic value continues to curve lower, two years after mostly drifting higher.

Trading in September, however, concluded lower by 1.8 percent, snapping a four-month winning streak and establishing an outside reversal candle pattern. This refocuses attention on the recently penetrated trendline resistance (support).

The currency pair’s technical position on the daily chart reveals stationary movement ahead of channel resistance (prior support – 1.1695).

The RSI oscillator, after spinning higher just north of oversold levels at the beginning of last week, remains on track to grapple with the 50.00 region and trendline resistance.

Going into the second half of the week, price action addressed 1.1753 resistance, together with a 38.2% Fib level at 1.1764. Buyers also actively defended demand close by at 1.1682/1.1716. Although technical analysts determine consolidations using different methods, the fact price tested the aforesaid areas twice suggests a ranging phase.

With the RSI oscillator also displaying a nearby trendline formation, a dip under 1.17 this week (and the H&S neckline) is likely to have sellers hone in on 1.1650 support.

Despite testing above monthly supply at 1.1857/1.1352, September’s depreciation echoes the possibility of further declines to retest the recently penetrated monthly trendline. Daily price also reveals a nearby channel resistance, a line that merges closely with daily RSI trendline resistance.

The complex head and shoulder’s top pattern forming on the H1, in conjunction with a lack of enthusiasm seen out of H4 demand at 1.1682/1.1716, as well as the higher timeframe picture, suggests sellers may take on 1.17 this week to reach at least 1.1650.

The month of September (lower by 2.9 percent) snapped a five-month winning streak and tested the upper border of demand at 0.7029/0.6664 (prior supply). From here, buyers appear free to explore as far north as 0.8303/0.8082 in the coming months, a supply zone aligning closely with trendline resistance (prior support – 0.4776).

Arranged by way of four successive daily bullish candles out of demand at 0.6964/0.7042, supply at 0.7131/0.7192 (prior demand) made an entrance last week. Despite modestly testing stops above its border on Thursday, Friday twisted lower and snapped the four-day run.

The technical landscape above the aforesaid supply reveals scope to test peaks around 0.7345 and supply coming in from 0.7453/0.7384.

The trend, according to the daily timeframe, has emphasised a positive tone since bottoming in late March. Traders may also recognise the RSI recently recovered from oversold turf and is within a stone’s throw from retesting 53.00 S/R.

A lack of selling interest this week will have market participants consider the possibility of further buying to trendline resistance (prior support – 0.7076) and supply coming in from 0.7234/0.7286.

The 100-period simple moving average circles just beneath current price, a line that may offer traders support this week. Toppling the SMA value, nevertheless, implies further losses to the 0.71 level.

With reference to the RSI oscillator, we can see two trendline resistances positioned around 62.00 this week.

Monthly price testing 0.7029/0.6664 as demand prompts a bullish theme, enough to perhaps force daily price beyond supply from 0.7131/0.7192 this week. Though do bear in mind that movement to the upside trades against the primary downtrend.

A short-term dip from H1 supply at 0.7178/0.7163 could unwind to 0.71, which marks an interesting level of possible support this week. 0.71 forms the lower edge of H4 demand and has additional back-up from H4 support at 0.7080. We also have monthly demand suggesting a nudge higher, albeit against the primary trend.

September, as you can see, tested the lower boundary of the aforesaid pattern and ended the month modestly off worst levels.

Recovery gains off monthly support at 104.62 (the lower boundary of the monthly descending triangle), despite price stalling around the 105.50 neighbourhood in recent trading, invites the prospect of additional bullish sentiment this week towards trendline resistance (111.71) and nearby supply at 107.58/106.85 (joined by the 200-day simple moving average at 107.52).

The RSI, for those who follow momentum oscillators, recently bottomed ahead of oversold levels and is on course to retest resistance around 57.00.

Friday’s sell-off amid news Trump had tested positive for coronavirus directed intraday action through trendline support (105.20) to test the 105 level (located just ahead of demand at 104.73/104.84). Price, as you can see though, rebounded into Europe and only saw a mild pullback form in the last hour of the US session.

Monthly support at 104.62 (lower base of the monthly descending triangle) holding price higher in September, along with the daily chart exhibiting room to approach trendline resistance and supply coming in from 107.58/106.85, signals buyers still have a reasonably strong hand in this fight.

Leaving trendline resistance taken from 2.1161 unopposed, September sunk 3.4 percent by way of a bearish outside reversal candle, on track to perhaps retest trendline support (prior resistance – 1.7191). Interestingly, the primary trend has faced lower since early 2008, unbroken (as of current price) until 1.4376 gives way – April 2 high 2018.

The RSI indicator recently formed a double-bottom ahead of oversold space, and currently hovers within touching distance of resistance at 55.00.

The falling wedge pattern between 1.2929/1.2828 was the primary focus on the H4 chart last week. Mid-week observed a breakout to the upside, which was shortly after followed up with a retest and a subsequent run to the pattern’s take-profit target around the 1.2980 region (green). Interestingly, Friday retested the pattern’s upper border for a second time and rallied to a high of 1.2953.

Friday settled a few pips above the 1.29 level, following a retest heading into the US session.

Monthly price shows space to extend September’s losses until testing trendline support (prior resistance). In conjunction with the monthly timeframe, daily price is seen exploring supply at 1.3021/1.2844, though sellers have yet to commit here.

From an intraday perspective, H4 rebounding from upper edge of the falling wedge pattern (support) a second time reveals H4 supply at 1.3055/1.3018 could make its way into the show sometime this week. On top of this, we can see buyers on the H1 timeframe holding 1.29 with room to approach 1.30. 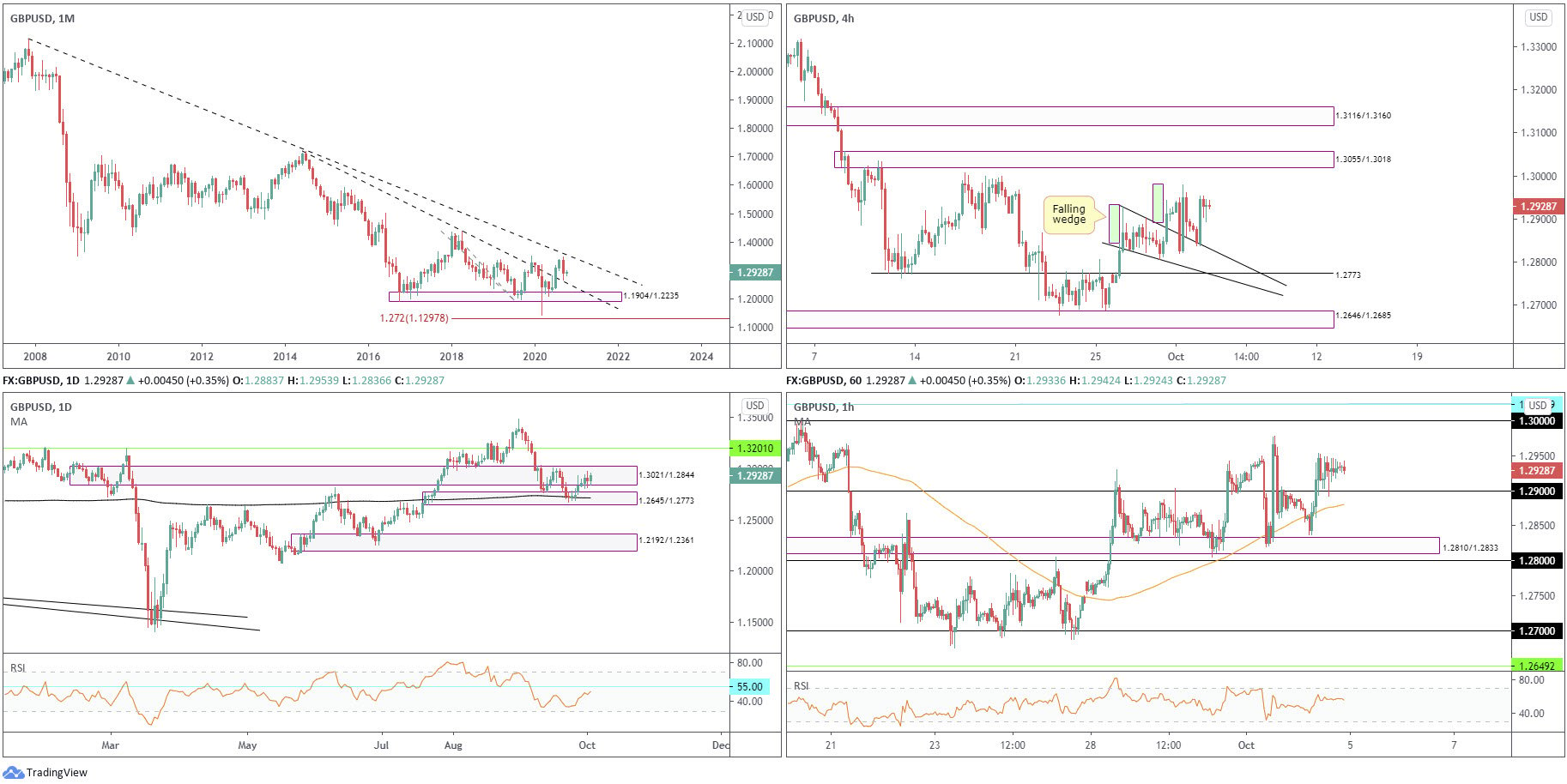