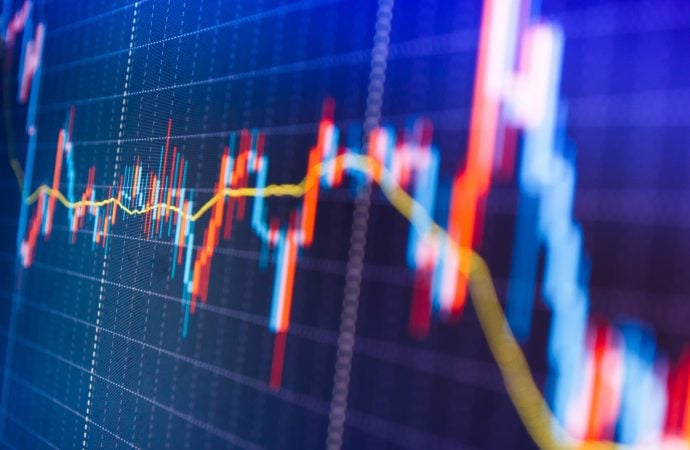 USD bids strengthened their grip last week, drawing the US dollar index—a measure of the USD value against six major foreign currencies—higher by 0.9% at the close of Q3.

Albeit refreshing one-year highs at 94.50, the tail end of the week came face to face with resistance around 94.45, shaped by way of a 38.2% Fibonacci retracement and a 1.272% Fibonacci projection. Plotted just south of neighbouring resistance at 94.65, sellers welcomed 94.45 resistance on Friday, dropping 0.2 percent. This landed the index on the doorstep of support from 93.90, a previous Quasimodo resistance barrier which is closely shadowed by a decision point at 92.71-93.53. Technical eyes may also acknowledge trendline support connecting with the decision point, extended from the low 89.84.

The relative strength index (RSI), a reliable gauge of momentum, connected with overbought space last week, clocking a high of 72.06. Indicator support to be mindful of this week rests around the 60.00ish region: the point at which two trendlines converge, followed by the 50.00 centreline.

In terms of trend, the greenback has established a series of higher highs and higher lows since price made contact with support from 89.69 mid-May. Under these circumstances, testing either support at 93.90 or the decision point at 92.71-93.53 is capable of igniting dip-buying attempts.

Also technically interesting on the weekly scale is the possibility of long-term sell-stops being tripped south of late September lows at $1.1612 (2020). Sell-stops could fuel larger buyer interest from $1.1473-1.1583.

Trend studies show that with the break of $1.1612 lows, the pair is perhaps in the early phase of a trend change to the downside.

Tracking declines evident in US Treasury yields, the US dollar index navigated deeper waters for a second consecutive session on Friday in what appears to be a spell of profit taking off one-year tops at 94.50. As a result, the euro discovered a modest floor, snapping a five-day losing streak.

Momentum, according to the relative strength index (RSI), arrived at oversold terrain last week, with support seen at 21.87. Note that in light of the currency pair grinding lower since June, the RSI may explore oversold levels for a prolonged period.

Quasimodo support at $1.1563 put in an appearance on Thursday and, as you can see, invited buying on Friday to highs of $1.1607. Clearance of Thursday’s peak at $1.1610 seats resistance at $1.1622 in the line of fire, a previous Quasimodo support sharing space with descending resistance, extended from the low $1.1794.

With immediate flow facing lower since June, $1.1563 is vulnerable. With this, either a test of $1.1622, or a decisive breakout below $1.1563, might boost further bearish interest.

Heading into the early hours of US trading Friday, candle action absorbed $1.16 offers and bumped heads with neighbouring Quasimodo resistance at $1.1605. Chartists will recognise short-term stops were likely tripped above $1.16, with $1.1605 shorts fading upside momentum, hence a dip to lows of $1.1584.

Although a mild end-of-week recovery developed from prime support at $1.1473-1.1583 on the weekly timeframe, the daily timeframe implies further selling could unfold this week to put Fibonacci support between $1.1420 and $1.1522 to work.

For this reason, expect weekly price to drill further into $1.1473-1.1583 before buyers attempt to show.

In line with the higher timeframes suggesting lower prices this week, resistance between $1.1634 and $1.1622 on the H1 timeframe (red) is an area that may draw in a bearish scenario, feeding off stops taken above last Thursday’s high at $1.1610.

Buyers and sellers remain battling for position around the upper perimeter of prime support at $0.6968-0.7242.

Trend studies on the weekly scale show we’ve been higher since early 2020. Consequently, any decisive response from $0.6968-0.7242 might be the start of a dip-buying attempt to join the current trend.

Demonstrated through the relative strength index (RSI), momentum is gaining traction to the upside. Journeying above the 50.00 centreline is something to keep an eye out for this week, movement informing traders average gains exceed average losses.

From the H1 chart, we can see the week finished shaking hands with supply from $0.7278-0.7263. While sellers formed a mild entrance from the zone, a Quasimodo support-turned resistance and Fibonacci confluence is present directly above at $0.7281. This tells traders a whipsaw above supply to either $0.7281 or Quasimodo resistance plotted at $0.7294 could come about early week.

Quasimodo resistance-turned support at $0.7237 delivers a reasonably logical support target for any bearish theme that might unfold.

We are beginning to see signs of bullish life from prime support on the weekly timeframe at $0.6968-0.7242.

Though the daily timeframe shows limited support until Fibonacci support between $0.7057 and $0.7126, the relative strength index (RSI) value travelling above the 50.00 centreline could help boost further buying on the weekly scale.

H1 supply at $0.7278-0.7263 offers a precarious tone right now, echoing the possibility of a whipsaw to either Quasimodo support-turned resistance and Fibonacci confluence at $0.7281, or Quasimodo resistance at $0.7294.

Alternatively, running stops above $0.73 may invite H4 sellers into the fight from resistance at $0.7317.

Establishing what many candlestick enthusiasts refer to as a shooting star pattern, a bearish scene directs flow to familiar demand at ¥108.40-109.41—arranged north of descending resistance-turned support, taken from the high ¥118.61.

Technically speaking, a 1.618% Fibonacci expansion at ¥112.05 stepped into the frame last week, hampering upside ahead of the noted weekly supply.

Subsequent bearish interest guided price to Quasimodo resistance-turned support at ¥111.11. Although the level is by no means consumed, the lack of buying is concerning and could eventually elbow the unit towards support at ¥110.70.

The relative strength index (RSI), following a rotation from overbought levels, is zeroing in on support at 56.85 (the upper edge of a previous range).

In response to the end-of-week drop, as declines in US Treasury yields benefited safe-haven flows, price action settled at supply-turned demand (formed early July) from ¥110.99-110.79. Positioned nearby daily support at ¥111.11, this is a possible area for dip-buyers, drawing additional fuel from sell-stops taken below last Wednesday’s low at ¥111.21.

Additional support to be aware of this week falls in at ¥110.42.

For those who read Friday’s technical briefing you may recall the following (italics):

All eyes are on ¥111; the big figure also brings daily and H4 support to the table, alongside a 38.2% Fibonacci retracement. Consequently, a dip-buying attempt may unfold from ¥111 if tested.

Evidenced from the H1 chart, price action did indeed band together with ¥111 and a 38.2% Fibonacci retracement at ¥110.95 on Friday. Notably, the approach to ¥111 formed a descending channel (drawn from ¥111.49 and ¥111.23) and helped demonstrate momentum to the downside is possibly slowing. A significant H1 close beyond channel resistance early week is likely considered a green light to begin pursuing bullish themes.

An assessment of weekly and daily timeframes highlights daily supports at ¥111.11 and ¥110.70 this week, which happen to align closely with support at 56.85 out of the relative strength index (RSI).

In similar fashion to Friday’s analysis, attention remains on the big figure ¥111 on the H1. Dovetailing with H4 and daily supports, a close above the H1 timeframe’s descending channel, taken from the high ¥111.49, is perhaps enough fuel to invite buyers, targeting H4 resistance at ¥111.60, followed by ¥112 on the H1.

Sterling ended the week 0.9 percent lower against the US dollar.

Conservative pattern sellers are likely to pursue a candle close beneath $1.3629-1.3456 before pulling the trigger.

GBP/USD staged a healthy comeback at the tail end of the week and pared a sizeable portion of earlier downside. Lifted amid improved risk sentiment and a USD decline, the currency pair is within reach of Quasimodo support-turned resistance at $1.3609.

Demand to the left of current price offers a fragile appearance, therefore sellers taking the wheel this week shines light on a Fibonacci cluster between $1.3121 and $1.3167.

With respect to the relative strength index (RSI) the value recently came into contact with oversold territory and formed a mild recovery. If the indicator manages to hold above 30.00, we may see the 50.00 centreline enter the fight should price connect with $1.3609.

Price bonding with a 100% Fibonacci projection at $1.3443—a horizontal level harmonic traders will recognise as an AB=CD formation which brings with it a 240% BC Fibonacci extension at $1.3419—led closing trade to support-turned resistance at $1.3570.

The break of weekly supply-turned demand at $1.3629-1.3456 and the active double-top pattern could have daily price respect resistance at $1.3609 this week.

Ultimately, a healthy bearish reaction has a daily Fibonacci cluster between $1.3121 and $1.3167 to target, positioned nearby the weekly timeframe’s double-top pattern profit objective at $1.3093.

However, $1.36 is also recognised as key resistance on the H1 scale should selling pressure level off. As underlined above, this round number converges closely with H1 resistance at $1.3616, as well as daily resistance from $1.3609 and H4 trendline resistance.