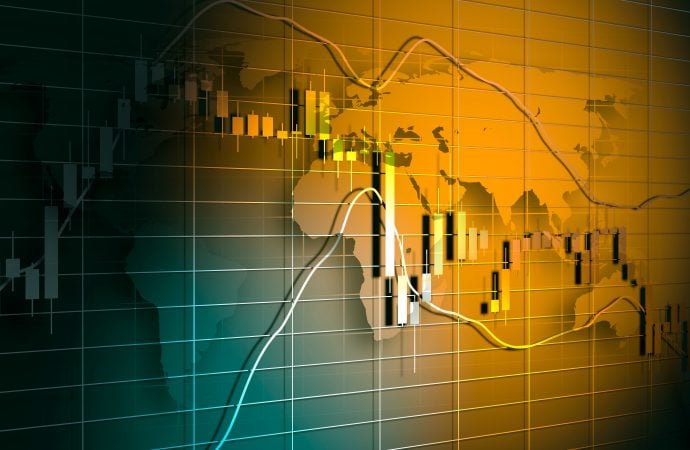 Trend on this timeframe remains decisively north, launching a series of higher highs and higher lows since March 2020 (secondary trend). However, the RSI merits attention. Since early December, the indicator has fashioned a double-top pattern (around 75.00 – blue arrows). Note the neckline at 65.27 was penetrated on December 22 and retested into the close of the year.

This resulted in price retesting the upper side of a symmetrical triangle (1.2271), arranged a few pips above trendline support (1.1602). Breaching the aforesaid trendline may liberate sellers, with little on the radar in terms of support until demand at 1.2040/1.2065.

The monthly timeframe reveals scope to carve out fresh highs. A 1.2095 daily support retest, however, could emerge prior to additional gains, targeting the two daily bullish pattern’s take-profit zones (1.2318/1.2384).

End-of year trade witnessed AUD/USD subdue resistance at 0.7647 to join hands with supply at 0.7756/0.7685, with Thursday developing a shooting star candle (generally interpreted as a bearish signal at peaks).

In spite of the supply area and bearish candlestick pattern, as well as the RSI recently forming bearish divergence, sellers are likely cautious (a daily close beneath 0.7647, nevertheless, may add confidence). This is due to the trend on this timeframe remaining north since early 2020, and monthly price seen calling for higher levels.

The inability to reach resistance at 0.7752 saw H4 end the year by way of a solid bearish candle off multi-month pinnacles.

With the RSI rounding off ahead of resistance at 80.85 Thursday and exiting overbought space, the value ended the session testing trendline support.

Monthly price has supply at 0.8303/0.8082 in the crosshairs, suggesting scope to advance in January. Daily price reacting from supply at 0.7756/0.7685, however, could greet support at 0.7647. Should the support display signs of strength, price may dethrone current supply and head for monthly supply.

RSI fans will see the indicator retreated ahead of 57.00 resistance (capping upside since July) and finished 2020 under 50.00.

Since mid-December, candlestick movement has been rangebound between resistance at 103.73 and daily support at 103.08.

Also noteworthy is the RSI lingering above 50.00, entrenched within an ascending channel.

Monthly price exhibiting a bearish theme below descending triangle support at 104.62 places a question mark on daily support at 103.08. A daily close below the aforementioned level unlocks the possibility of monthly support surfacing around 101.70 (located within daily demand at 100.68/101.85).

Pulling through 103 this week is also likely to capture the attention of sellers, with all four timeframes then trading in unison, targeting at least 102.50 support (H1).

The RSI reveals a rangebound environment, limited by support around 47.00 and resistance at the 66.00 region. There is also mild bearish divergence currently being seen.

Reasonably heavy-handed resistance resides overhead on the H4 timeframe this week at 1.3711, surrounded by two Fib projection levels around 1.3700.

External levels to be mindful of are the 1.36 and 1.37 round numbers. Also interesting is the RSI forming a declining channel, effectively indicating bearish divergence.