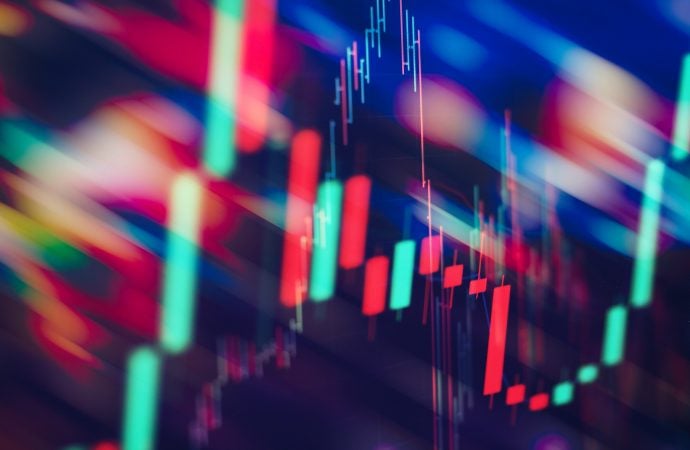 The US dollar, according to the US dollar index (DXY), marched north last week, adding 0.5 percent and snapping a three-week losing streak. The bulk of the weekly ascent emerged on Friday, inspired amidst healthy data on personal income and spending in March, in addition to a positive Chicago PMI print—the highest reading in decades.

The technical framework reveals Friday’s spirited advance—formed just north of trendline support, taken from the low 89.20—elevated the DXY to within touching distance of resistance at 91.36, a prior Quasimodo support level.

Long-term trend studies show the USD has been underwater since topping ahead of 103.00 in March 2020—many analysts likely refer to this downward movement as a primary trend on the daily scale. Also worth highlighting is the 93.43 31st March peak, and subsequent slide in April, which echoes seller strength within the downtrend.

Meanwhile, as measured by the RSI indicator, momentum recently gathered traction to the upside after discovering a bottom ahead of oversold settings. The value settled the week within close proximity of the 50.00 centreline, yet a break here may uncover resistance at 55.67.

Leaving Quasimodo resistance at 1.2169 unchallenged, EUR/USD bears have the 200-day simple moving average on the radar this week (1.1935). Technical analysts will note moving averages have a tendency to deliver dynamic support and resistance when tested.

Upside momentum levelled off in the latter part of last week—topping within a whisker of RSI overbought territory—withdrawing back to the 55.00ish range. RSI support at 46.23, therefore, deserves attention this week.

Friday’s one-sided decline landed candle action within a stone’s throw from support at 1.1990. Technical elements also bring light to a Fibonacci cluster between 1.1971 and 1.1986—a defined area on a price chart where Fib retracement levels converge.

Overthrowing the aforesaid Fib cluster this week unearths additional support at 1.1937 (aligns closely with the 200-day simple moving average on the daily scale at 1.1935), while a rotation to the upside exposes resistance at 1.2108.

Technically speaking, this could have EUR/USD bump heads with the key figure 1.20 early week.

While the round number is likely a watched base in this market, traders are urged to pencil in the possibility of a whipsaw through the level. Orders are likely to crowd this area, welcoming movement known as a stop run. Bids, assuming heavyweight orders, from both H1 support at 1.1989 (prior Quasimodo resistance) and H4 support between 1.1971 and 1.1990, therefore may welcome the stops (sell orders) beneath 1.20.

In terms of the RSI indicator, the value voyaged deep into oversold territory and came within striking distance of support at 13.07.

April showing some life out of monthly demand from 1.1857-1.1352 reinforces a possible retest (dip-buying scenario) of the 200-day simple moving average at 1.1935 (daily timeframe) this week.

H4 structure reveals support resides between 1.1971 and 1.1990. A test of this area ignites a potential stop run through the 1.20 figure on the H1 timeframe—movement that could motivate a bullish presence back to at least 1.2050ish.

Resistance at 0.7817, as you can see, welcomed sellers in the second half of last week, with Friday exacerbating losses amid healthy USD demand and declines observed in major US equity benchmarks (the Australian dollar often reacts to risk moves). Down by 0.7 percent at the close, further downside this week shines the technical spotlight on February’s low at 0.7563.

RSI movement elbowed through trendline support, extended from the low 36.55, as well as nudging marginally under the 50.00 centreline, which suggests increased downside momentum could be on the cards.

What’s technically interesting is the unit concluded the week within the walls of the aforementioned demand, shaped by way of a hammer candle pattern (bullish signal). Should price rupture the noted base this week, trendline support, taken from the low 0.7531, and a Fibonacci cluster between 0.7657 and 0.7672, is seen lying in wait.

Bearish forces modestly surpassed 0.77 on Friday and shook hands with a 1.272% Fib projection at 0.7697 (plotted ahead of familiar demand at 0.7679-0.7695). Leaving behind a moderate hammer candle pattern, you will note follow-through buying emerged into the close.

In conjunction with Friday’s 0.77 test, RSI action dipped a toe in oversold waters and challenged support at 19.40. The RSI value, albeit mildly reacting from the aforesaid support, remained within oversold terrain at the close.

Daily resistance at 0.7817 holding firm last week reflects a bearish climate and, given the room to manoeuvre lower to February’s low at 0.7563 on the daily scale, additional bearish flow may be in the offing this week.

The RSI indicator, although ending the week above the 50.00 centreline (a sign of trend strength), is seen engaging resistance at 57.00.

Mid-week trading witnessed support pinned at 108.50 and neighbouring demand from 108.20-108.43 (the decision point to climb 108.50) make a show, which consequently motivated a bullish wave in the second half of the week.

In line with the RSI oscillator marginally exiting overbought space, price action entered into a narrow range heading into US hours on Friday.

The technical framework shifts focus to Quasimodo resistance at 109.44, while a bearish stance draws attention to 109 and trendline support, etched from the low 107.64. Traders will also note that unseating 109.44 perhaps paves the way north to resistance at 109.95 and the 110 figure.

Monthly flow testing descending resistance-turned possible support places a question mark on daily supply at 109.97-109.18 this week. For that reason, bearish action from the aforesaid supply may be short-lived.

H1 Quasimodo resistance at 109.44, although the base could trigger mild bearish interest, is likely to surrender, according to chart studies. Not only do we have monthly price showing signs of supportive structure, the H4 scale displays scope to advance at least to the 61.8% Fib level at 109.60 and nearby supply at 109.97-109.72.

The pendulum swung in favour of buyers following December’s 2.5 percent advance, stirring major trendline resistance (2.1161). February subsequently followed through to the upside (1.7 percent) and refreshed 2021 highs at 1.4241, levels not seen since 2018. Contained within February’s range, however, March and April witnessed decreased volatility

Resistance at 1.4003 has proved a stubborn hurdle since March, capping upside attempts on multiple occasions. Friday’s 0.9 percent decline, as you can see, throws light on 1.3670 bottoms, arranged north of Quasimodo support at 1.3609.

Friday ran through a number of key supports, including a trendline formation, extended from the low 1.3668, and cemented a mild bottom a few pips north of the 1.38 figure. Territory south of the aforementioned round number opens chart space to Quasimodo support at 1.3752—plotted just north of the H4 Quasimodo at 1.3750.

RSI support at 12.22, located deep within oversold space, made an appearance on Friday. It’s important to note that although the value responded from the said support, the indicator remained within oversold into the closing bell.

Despite recent hesitation within February’s range, the monthly timeframe shows a trendline resistance breach occurred late 2020. Should the 1.4376 top be engulfed, longer-term buying may become a key theme in this market.

Daily areas to watch this week are Quasimodo support at 1.3609 and resistance at 1.4003

H4 demand at 1.3809-1.3832 taking on a mild breach Friday suggests buyers are likely to remain on the ropes in early trade this week, targeting H4 Quasimodo support at 1.3750 and associated Fib studies around 1.3744.

By the same token, therefore, H1 sellers could tunnel through 1.38 and make a run for Quasimodo support at 1.3752.