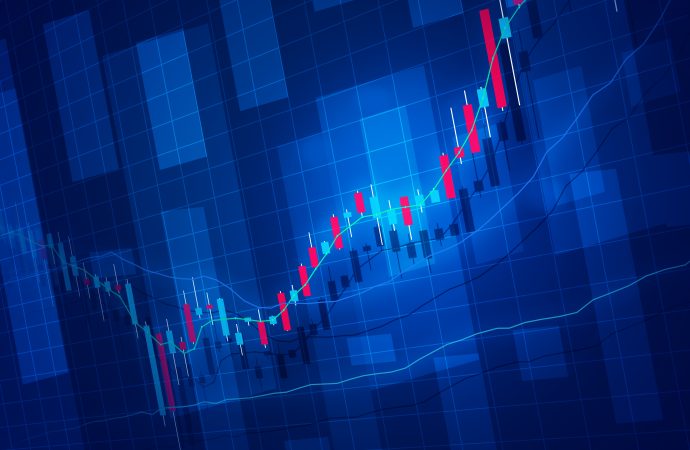 Shedding more than 0.6 percent, the US dollar, as measured by the US dollar index (DXY), unsurprisingly carved out a second successive losing week and renewed monthly lows.

Feeble attempts at recovery off daily support from 92.26 throughout November demonstrated a lack of co-operation from buyers, ultimately allowing sellers to dethrone support and maintain control last week. This, together with the RSI momentum oscillator depreciating within a descending channel (under 50.00 since early November) along with a defined downtrend, signals sellers could uphold a bearish setting this week and bend towards daily support at 90.99.

As reported in recent writing, the primary trend on the monthly timeframe, since March 2008, has been entrenched within a large-scale pullback, though since 2017 uncovered resistance off 103.00. Additionally, the daily timeframe (off 102.99) moulded a series of lower highs and lower lows from March 2020. Traders will also note price crossed under the 200-day simple moving average heading into June of this year, currently circling 96.02.

Following the break of long-term trendline resistance (1.6038) in July, and subsequent break of supply from 1.1857/1.1352 in August, November has witnessed buyers make an entrance, up by 2.7 percent.

Aligned with the monthly timeframe, last week watched the daily chart squeeze through the upper perimeter of an early descending wedge pattern (correction) between 1.2011 and 1.1612 (some may interpret this arrangement as a descending triangle pattern).

However, despite the above and the fact EUR/USD has been trading northbound since early 2020 (along with the DXY suggesting lower levels), supply recently made an entrance at 1.2012/1.1937 (active since May 2018) which may hinder buyers this week.

RSI fans will note the value remains comfortably above 50.00, and is on track to cross paths with overbought space.

Following 1.19 welcoming a retest heading into Thursday’s US session (albeit delving to lows at 1.1885), intraday energy extended the recovery and had Friday topple 1.1950 resistance and give light to resistance at 1.1966.

The widely watched 1.20 level is in the crosshairs should buyers manoeuvre through 1.1966 this week.

Against the backdrop of price levels, the RSI indicator currently trades in an interesting overbought position: within close range of resistance at 81.50 by way of an ABCD pattern.

The monthly chart showing scope to climb, following the breach of supply at 1.1857/1.1352, signals there may be strength behind the daily descending wedge breach last week.

This, technically, places daily sellers within supply at 1.2012/1.1937 in a vulnerable setting. 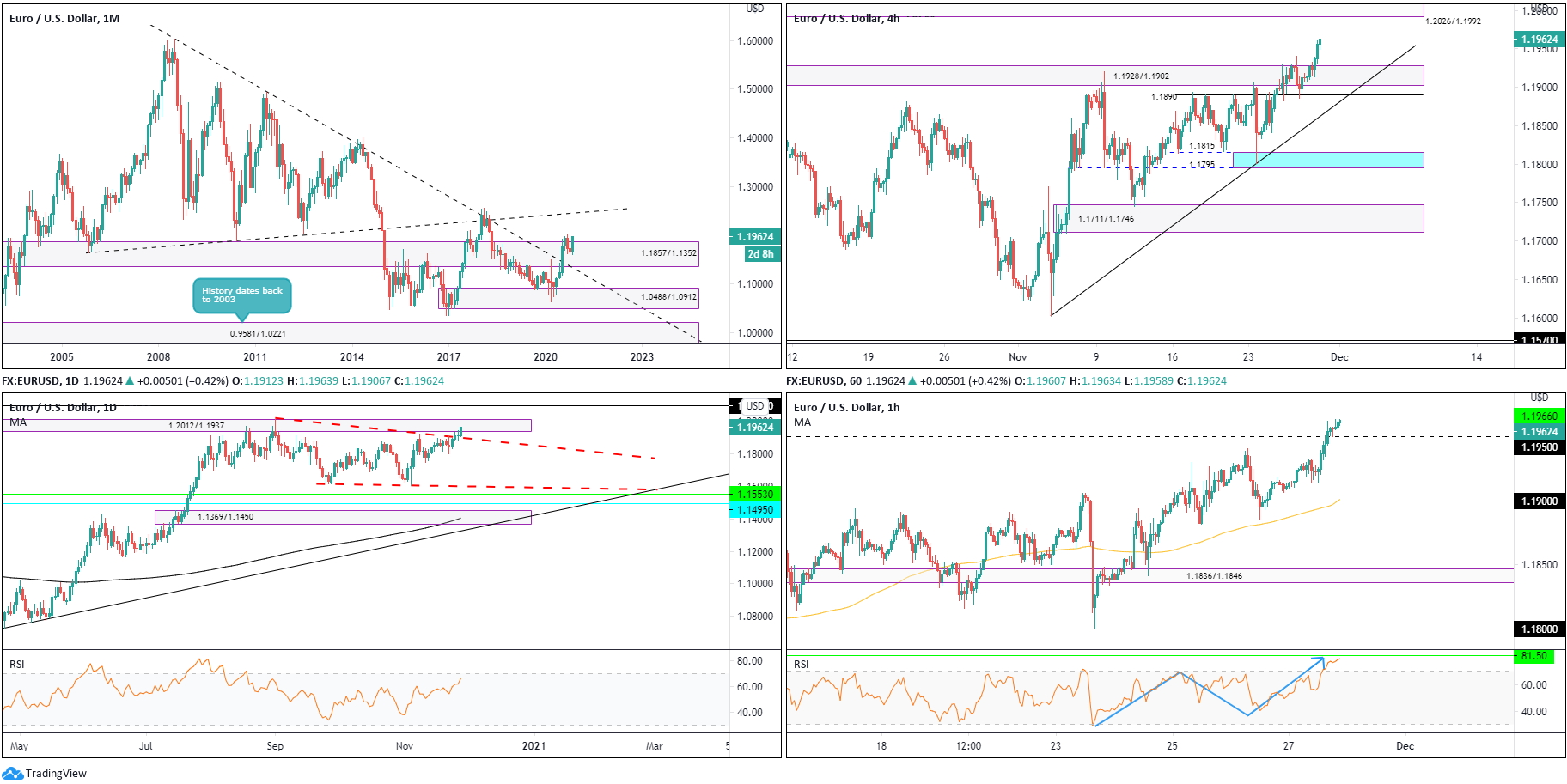 Following a mild correction that addressed the upper border of demand at 0.7029/0.6664 (prior supply), buyers have so far responded well. Up by 5 percent in November, buyers appear to be free to explore as far north as 0.8303/0.8082 in the coming months, a supply zone aligning closely with trendline resistance (prior support – 0.4776).

Trend on this timeframe has remained to the upside since March 2020, in spite of the lengthy correction since September.

The H4 chart reveals price took over the upper boundary of an ascending triangle made up between resistance at 0.7340 and trendline support from 0.7221.

This unmasks September peaks at 0.7413 and the ascending triangle take-profit target at 0.7463 (pink).

In a fashion similar to the H4 chart, the upper level of an ascending triangle displayed on the H1 chart between 0.7367/0.7311 was taken early Friday and retested as support heading into US trading.

The 0.74 region made its way into view, prompting a mild end-of-week correction.

With reference to the RSI oscillator, a double-top pattern recently formed off overbought levels. The neckline at 53.15 was also taken Friday, signalling momentum could continue to decline in the early stages of the week.

Short-term charts have two ascending triangle patterns in the picture, both gesturing higher prices this week. 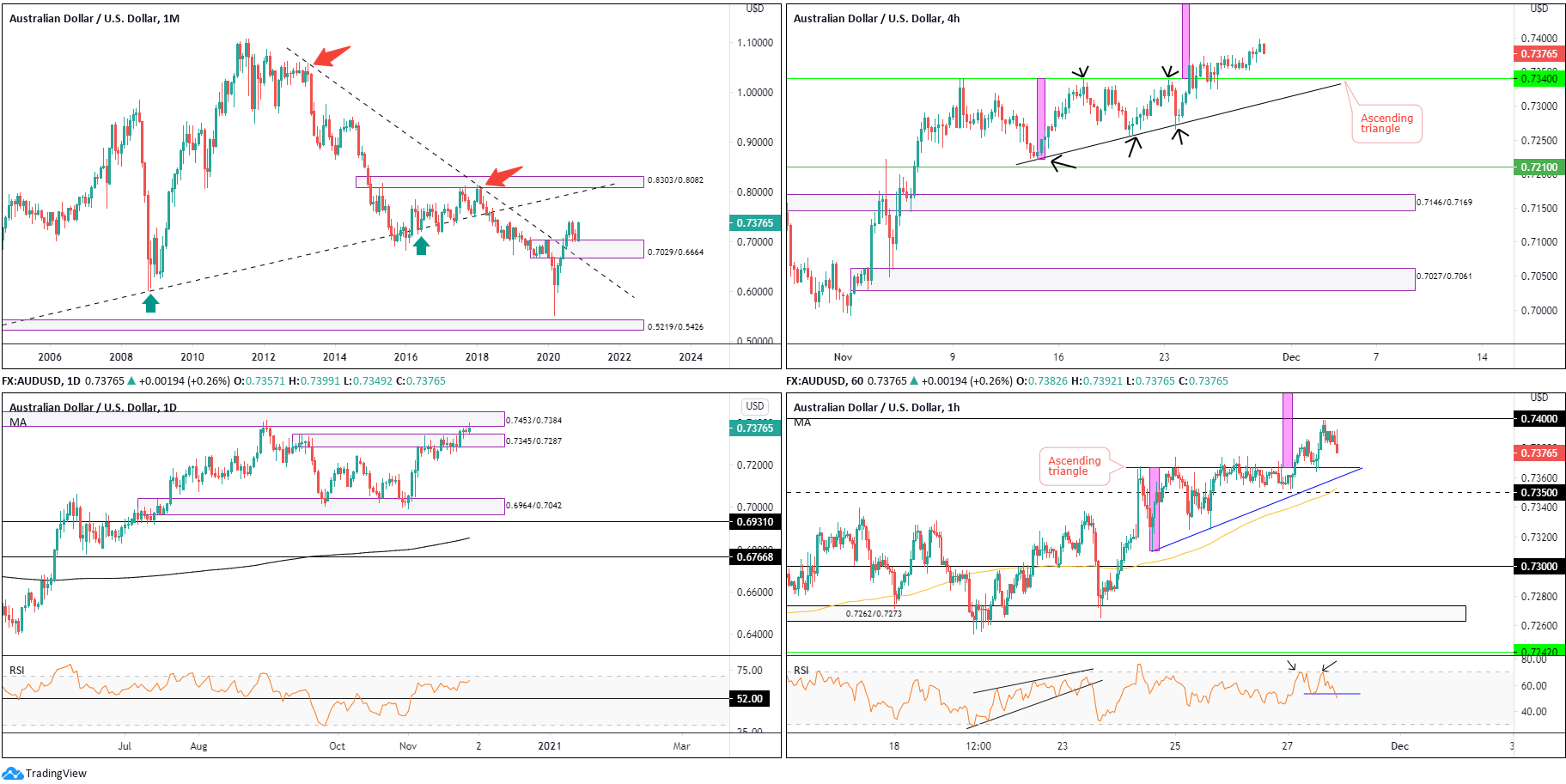 November, as you can see, is working with the lower edge of the aforesaid pattern, down by 0.6 percent and on track to record a third successive monthly loss.

104.22 continues to serve as clear S/R on the H4 chart, retested as resistance on Friday.

Following a somewhat disorderly 104 test Friday, upside gathered traction and tested the lower side of supply at 104.21/104.32. This is considered an important zone due to it being a location a decision was made to breach November 24 low at 104.14.

104, as you can see, re-entered the frame late Friday though received a dull welcome from buyers.

November trading higher by 2.8 percent seats trendline resistance (2.1161) in the line of fire on the monthly chart.

In conjunction with the H4 timeframe, H1 also established an ascending wedge between 1.3263/1.3380 which had its lower edge penetrated last Thursday.

Considered a reversal signal, the pattern’s take-profit target (pink) can be found beyond the 1.33 level (which was tested into the close Friday), around the 1.3243 region.

H4 responding from supply at 1.3402/1.3368 and violating the lower ledge of the ascending wedge implies sellers may target 1.3182 support

1.33 support on the H1 appears vulnerable. Not only are daily and H4 sellers possibly changing gear this week, H1 suggests a move through 1.33 to welcome the H1 ascending wedge take-profit target at 1.3243.