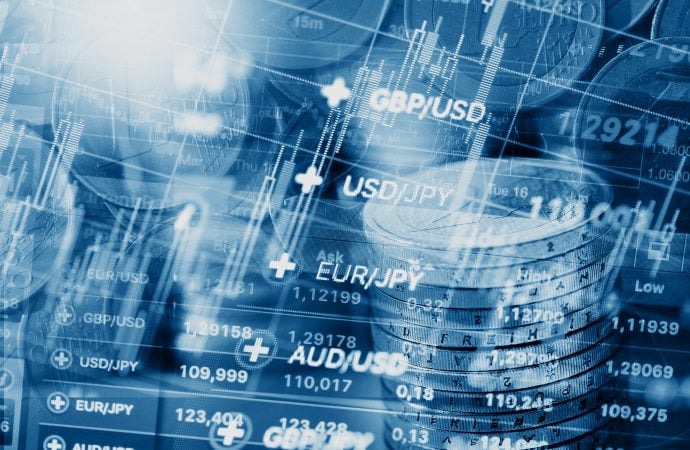 Fracturing the aforesaid resistance this week unmasks another resistance from 95.83, with subsequent upside to cross paths with a bearish harmonic Bat pattern’s potential reversal zone (PRZ) between 97.13/96.27 (yellow area).

In the context of trend, since March 2008, a large-scale pullback has been seen on the monthly timeframe (primary trend is considered south). The daily timeframe’s downtrend (since March 2020), however, is being questioned owing to the recent trendline resistance break.

The US dollar’s outperformance last week had EUR/USD on the backfoot. Sellers delivered a series of back-to-back red candles out of supply from 1.1872/1.1818.

Addressing lower territory this week throws light on support from 1.1553 and a descending support line from 1.2011.

Traders will also note the RSI oscillator is within a stone’s throw from crossing paths with trendline support (prior resistance).

Before transitioning to deeper terrain on Friday, intraday mildly overran the 1.17 level to greet supply at 1.1717/1.1701 (this is an area where a decision was made to break through orders at 1.17 as support).

Although price essentially plotted a fresh lower low on Friday, the RSI oscillator has yet to follow-through and has consequently displayed bullish divergence.

Both monthly and daily timeframes communicate the possibility of a bearish setting this week, with daily support at 1.1553 targeted.

The technical situation on the lower timeframes also subscribe to the possibility of additional selling. However, though short-term H1 flow may fall from 1.1650 resistance, intraday support sits at 1.1627, a level that essentially aligns with the upper border of H4 demand at 1.1580/1.1626.

As a result of the above, sellers must confront short-term supports before reaching daily support at 1.1553.

Last Wednesday, as you can see, withdrew to demand at 0.6964/0.7042, yet the latter part of the week offered little price movement. Note this demand is also secured a few pips above support at 0.6931.

Clearing supports this week shines light on the 200-day simple moving average at 0.6799 and a neighbouring support level marked at 0.6766.

From the RSI oscillator, we recently twisted lower ahead of 52.00 resistance with the value currently scanning territory below 40.00.

Bearish follow-through, on the other hand, could target support from 0.6923.

H1 is now on the verge of testing the widely watched 0.70 level, arranged just ahead of support at 0.6984. It may also be useful to note the RSI oscillator currently grapples with channel support.

Monthly and daily timeframes offer demand at the moment, albeit buyers have yet to make much of a show.

The longer-term view offers an interesting perspective; monthly and daily price engage with their respective descending triangle supports, therefore an advance this week should not shock.

Yet, in case buyers lose control this week, dipping to support at 1.2773 is a possibility.

After topping around 1.3176 on October 21, the pair has been working with a descending channel pattern (1.3019/1.3176), with the 100-period simple moving average trailing alongside the upper line.

Friday, as you can see, retested the 1.29 level in perfect form, gifting intraday buyers entry into the market to target channel resistance. With the latter holding back upside into the close, a return to the 1.29 space could occur, possibly even forcing moves to support at 1.2862.

Daily price reveals room to reach for demand at 1.2645/1.2773, alongside monthly price offering a possible dip to retest trendline support.

In keeping with higher timeframe direction, Friday’s reaction from H1 channel resistance may provoke selling in the early stages of trading this week, with 1.29 targeted. As a precaution, however, traders are encouraged to plan for the possibility of a 1.30 test (and nearby 100-period simple moving average) before sellers check in.