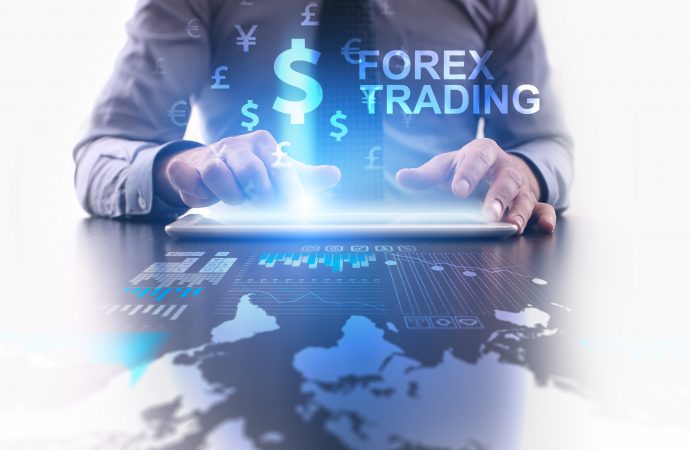 After penetrating the upper perimeter of a daily falling wedge pattern (93.91/92.55), upside performance was initially lacklustre, hampered by daily supply at 94.02/93.56 and the current downtrend, active since topping in March. A falling wedge can signify either a reversal or continuation signal – in this case the pattern implies a reversal.

The dollar’s aggressive appreciation last week (four out of five bullish days) witnessed the candles power through the aforesaid supply (contained upside since August) and cross paths with an area of interesting resistance heading into the close. Not only has the buck reached the falling wedge take-profit target at 94.65 (measured by gauging the base distance and adding this value to the breakout point – light purple boxes), price action also communicates healthy confluence here in the form of a trendline resistance (102.99) and an ABCD resistance at 94.63 (together with a 2.0 BC projection at 94.58).

Sustained upside this week suggests resistance at 95.84, an active S/R level since June 2016, may resurface, while bearish forces could retest broken supply at 94.02/93.56.

The RSI oscillator has produced a series of higher lows/highs after bottoming at 17.50 heading into August, with the value currently hovering within a stone’s throw from overbought space.

Thursday’s recovery effort off 1.1626 proved unsustainable, in the absence of any concrete daily support.

The currency pair’s technical position is tipped for more underperformance this week until making contact with 1.1553 support, with a break uncovering demand at 1.1369/1.1450.

With respect to the RSI oscillator, the line recently pushed through the lower limit of a two-month descending channel formation, throwing light on oversold terrain.

Friday wrapped up on the backfoot, nosediving into the aforesaid demand. Traders will note that sustained weakness here provides a basis to test nearby support at 1.1570.

Leaving behind supply at 1.1717/1.1691 (also represents supply on the H4 and contains 1.17) on Friday, mid-morning trade during Europe reacted off RSI trendline resistance and burrowed through 1.1650 support to test lows just ahead of the 1.16 level and 1.1589 support. This also pulled the RSI value into oversold terrain.

Although testing the air above monthly supply at 1.1857/1.1352 likely tripped some long-term stops, September’s depreciation echoes a possible decline to retest the recently penetrated monthly trendline, which happens to share space with daily demand at 1.1369/1.1450.

However, to reach the aforesaid demand, daily support at 1.1553, an active hurdle since February 2015, must be dethroned.

H4 demand at 1.1580/1.1626 is unlikely to bear much fruit, owing to both weekly and daily timeframes suggesting moves beyond the area to at least daily support at 1.1553. As such, a retest at 1.1650 resistance on the H1 may excite sellers in early trade to initially approach 1.16. 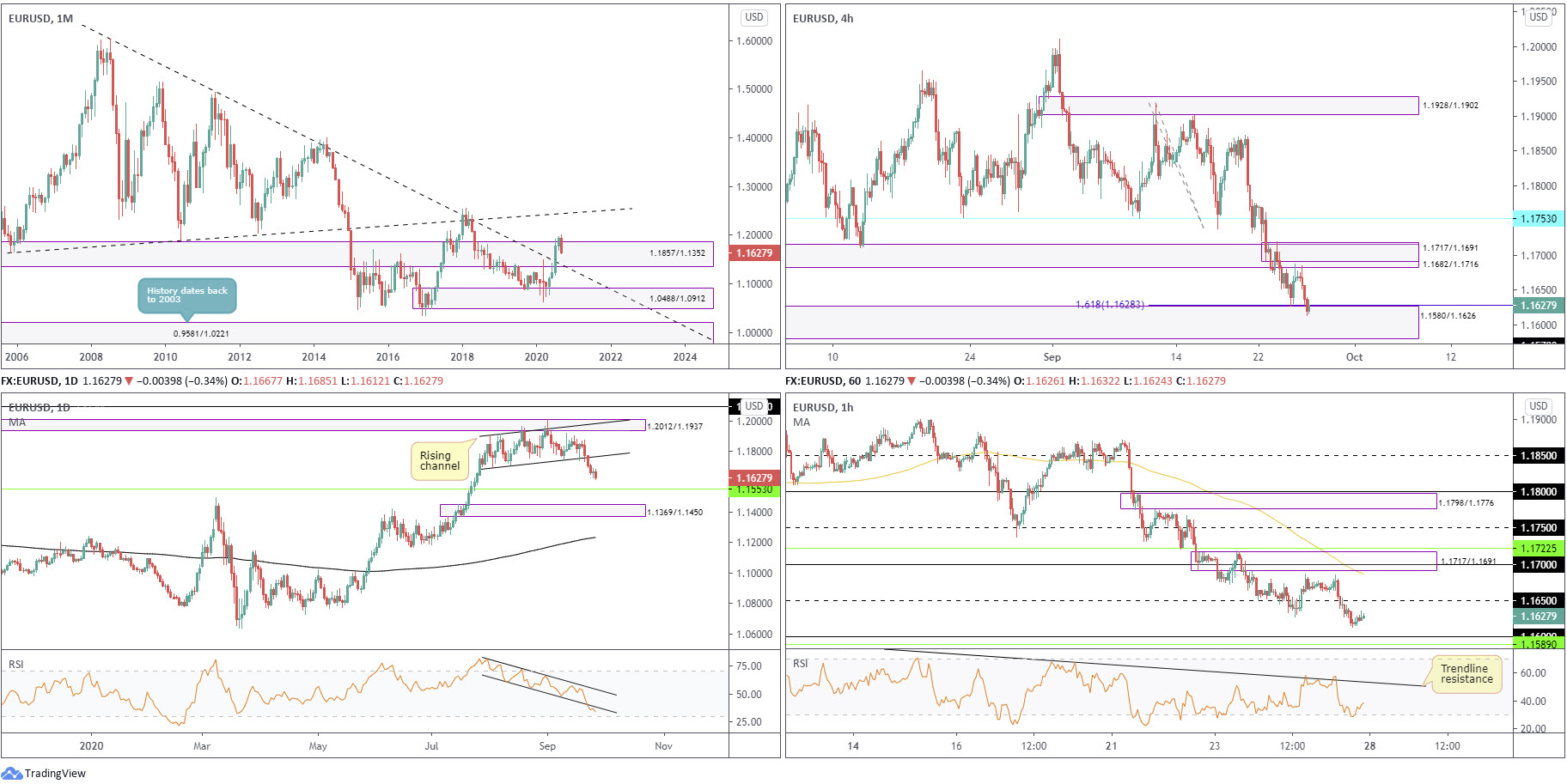 The trend, according to the daily timeframe (and also the 200-day simple moving average), has emphasised a positive tone since bottoming in late March. Traders may also recognise the RSI traded aggressively south of 53.00, a clear S/R level since October 2019, and recently embraced oversold turf.

Late Friday observed price spike through the lower perimeter of H4 demand, enough to perhaps collect stops and shine light on a possible run to demand at 0.6934/0.6965 (grips the lower boundary of daily demand).

Bottoming a handful of pips ahead of the widely watched 0.70 figure (confirmed by bullish RSI divergence), late US Friday moderately pared losses and finished the week hugging supply at 0.7054/0.7028 (holds 0.7050 resistance within).

Monthly price testing 0.7029/0.6664 as demand, along with daily price also testing demand at 0.6964/0.7042 (albeit buyers appear lacklustre at the moment off this area), puts forward a bullish vibe heading into the fresh week.

H4 demand at 0.7014/0.7035 is under fire after having its lower perimeter checked on Friday, signalling sellers could take on bearish commitments out of H1 supply at 0.7054/0.7028 to at least test 0.70. Buyers are expected to make a show this week, according to the higher timeframes, therefore movement beyond H1 demand at 0.6962/0.6977 is questionable.

Notably, September tested the lower boundary of the aforesaid pattern.

Recent recovery gains off monthly support at 104.62 (the lower boundary of the monthly descending triangle), shaped in the form of five successive bullish candles, invites the prospect of additional bullish sentiment this week towards trendline resistance (111.71) and nearby supply at 107.58/106.85.

The RSI, for those who follow momentum oscillators, recently bottomed ahead of oversold levels and is now on track to test 50.00.

Early Europe Friday rebounded ahead of intraday demand (prior supply) at 105.23/105.14 and, underpinned by the DXY listing healthy gains, cruised through 105.50 resistance to knock out a weekly peak at 105.70.

Mildly paring gains amidst US trading turned things back to 105.50 support, set just above demand at 105.40/105.48 (a significant intraday zone as this potentially was where a decision was made to break through 105.50).

Monthly support at 104.62 (lower base of the monthly descending triangle) prompting a decisive advance last week, along with the daily chart exhibiting room to approach trendline resistance and supply coming in from 107.58/106.85, signals buyers are likely to remain behind the wheel this week.

Supply at 105.82/105.66 is in place on the H4 timeframe, yet on the H1 chart 105.50 and demand at 105.40/105.48 could tempt buying. This, of course, is in line with higher timeframe action recently rebounding from monthly support, together with room to approach higher levels on the daily chart.

Despite three decisive bearish candles established out of supply at 1.3021/1.2844, the second half of the week exhibited a somewhat stationary bearing, with each session concluding unmoved.

Demand at 1.2646/1.2685 accepted price action on Wednesday. Although buyers continue to defend the aforesaid demand area, resistance at 1.2773 is proving a tough nut to crack. Should the pair eventually muster enough strength to conquer the noted level, supply at 1.2876/1.2840 is next on tap.

Outside of the current range, traders will be watching resistance at 1.2867 and support coming in from 1.2649.

It might also be worth noting the RSI oscillator recently brushed through 50.00 to the upside.

Recognising monthly price shows some room to push lower until testing trendline support (around 1.26ish), together with daily price struggling to print anything of meaning out of demand at 1.2645/1.2773, echoes a bearish vibe.

Failure to overthrow H4 resistance at 1.2773 and H1 supply at 1.2824/1.2776, therefore, could see intraday flow probe beyond 1.27 this week, with H1 support at 1.2649 targeted, followed by the 1.26 level. The latter represents a logical downside target for sellers and a potential reversal zone for buyers, given it connects with monthly trendline support.