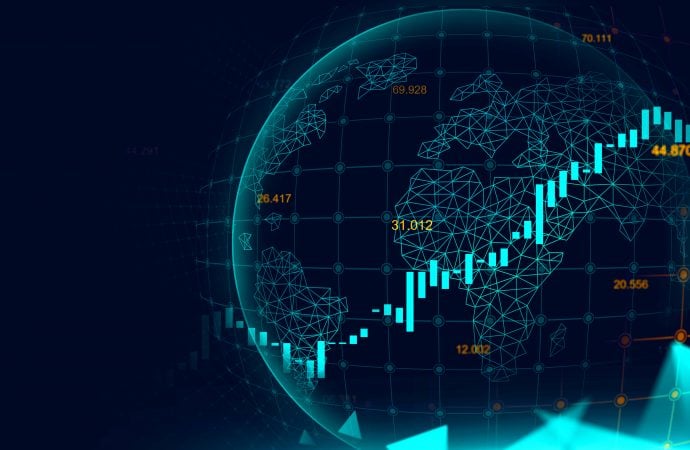 Cementing a strong bearing underneath support at 95.84 in early trade, the US dollar index, a measure of the USD’s value against a weighted basket of foreign currencies, logged a fifth successive bearish close last week and erased 1.7%.

With 95.84 potentially now a distant memory, 93.97 takes centre stage this week, a long-term bearish pennant take-profit target (yellow – measured by calculating the distance of the preceding move and adding the value to the breakout point).

Also notable is a fresh bear flag shaped between 95.72/97.45, introducing itself at the beginning of July. Swallowing 93.97 in upcoming trade theoretically projects moves as far south as 92.72 (the bear flag take-profit target measured by calculating the preceding move and adding the value to the breakout point – purple).

Indicator-based traders will also note the RSI oscillator recently elbowed into oversold territory, circling 23.27 as of the close of trade.

Interestingly, July, currently trading +3.8%, is on course to overthrow the aforesaid trendline resistance.

Rolling out a sixth successive bullish candle Friday, stirring a mid-week close above resistance at 1.1553, price hurled EUR/USD to within reach of a 5-wave completion around 1.1669 (when wave 3 of an impulse wave is extended, wave 5 is expected to equal wave 1).

Skies above the aforesaid supply appear to be relatively clear for an approach to resistance at 1.1722 this week, though prudent traders will take note of the possibility of a retest forming at 1.1628/1.1600 before climbing.

It should also be noted the RSI indicator is seen fast approaching overbought territory.

Monthly price trades above trendline resistance, albeit still sheltered within the parapets of supply.

Daily action, after dethroning resistance at 1.1553, has eyes for a 5-wave completion around 1.1669, perhaps hampering upside this week.

Breakout buyers above H4 supply and 1.1650 resistance on the H1 are urged to remain vigilant to the possibility of a dip to retest recently penetrated areas.

May’s extension, together with June and July’s follow-through witnessed supply at 0.7029/0.6664, and intersecting long-term trendline resistance (1.0582), relinquish ground in recent trading. Technically, buyers are now potentially free to run as far north as 0.8303/0.8082, a supply zone that aligns closely with trendline resistance (prior support – 0.4776).

Wednesday’s action came within a stone’s throw away from reaching 0.7197 resistance, with Thursday delivering a bearish candle and snapping a four-day winning streak. Friday, however, lacked direction and produced what appears to be a neutral doji candlestick pattern.

In terms of the RSI oscillator, the value recently exited overbought territory and is producing bearish divergence.

Following Wednesday’s rejection at supply from 0.7198/0.7179, an area which houses daily resistance underlined above at 0.7197, Friday dipped a toe in waters just north of support at 0.7043. Although putting forward a mild recovery into the week’s end, 0.7043 is likely on watchlists as a downside target this week, as well as demand from 0.7015/0.7035 (and nearby trendline supports). 0.7015/0.7035 is an interesting zone; it is marked as a point where a strong decision was made to break through neighbouring highs.

Renewed upside amid US trade Friday delivered candles to the underside of 0.71, sharing space with a 100-period simple moving average, currently trading at 0.7105.

With respect to the RSI oscillator, we recently trekked above 50.00 which indicates momentum is on the rise.

Struggling monthly supply at 0.7029/0.6664 and intersecting trend line resistance implies long-term bulls may be looking to explore higher terrain over the coming weeks. Cranking through daily resistance at 0.7197 will help confirm an upside bias. Dips on the daily timeframe this week, however, could draw support at 0.6931 back into the frame. 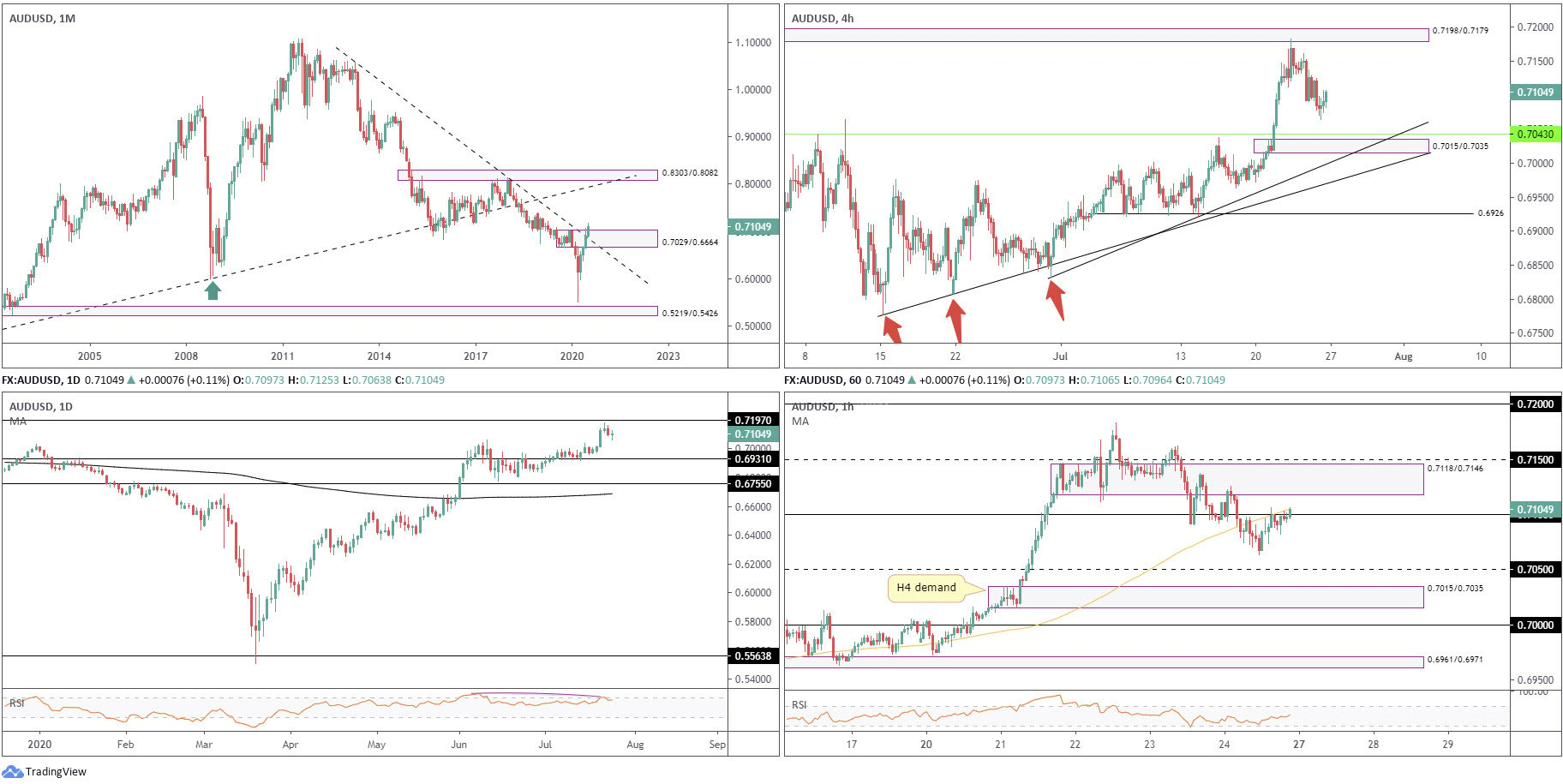 April and May were pretty uneventful, with June also wrapping up indecisively in the shape of a neutral doji candlestick pattern. July, nonetheless, currently trades lower by 1.7%.

Going into the new week, the area is unlikely to revive buying, reopening the risk of a return to support at 105.01.

Following rangebound trade since July 9 where swings were more 2-way and indecisive, Friday watched USD/JPY voyage through range support at 106.39/106.64 and heavily collide into 106.07 support.

As you can see, the session wrapped up with price retesting the underside of 106.07, a level which may serve as resistance amid early trade this week. Large demand at 104.50/105.29 is featured as the next point of interest to the downside.

Leaving behind 105.50 support, 106 resistance unlocked its doors heading into the week’s close, with price squeezing out intraday sellers fading 106 and reaching highs at 106.16.

The RSI momentum oscillator, since Thursday, has been bottoming within oversold terrain, with Friday pulling the value to 42.00. 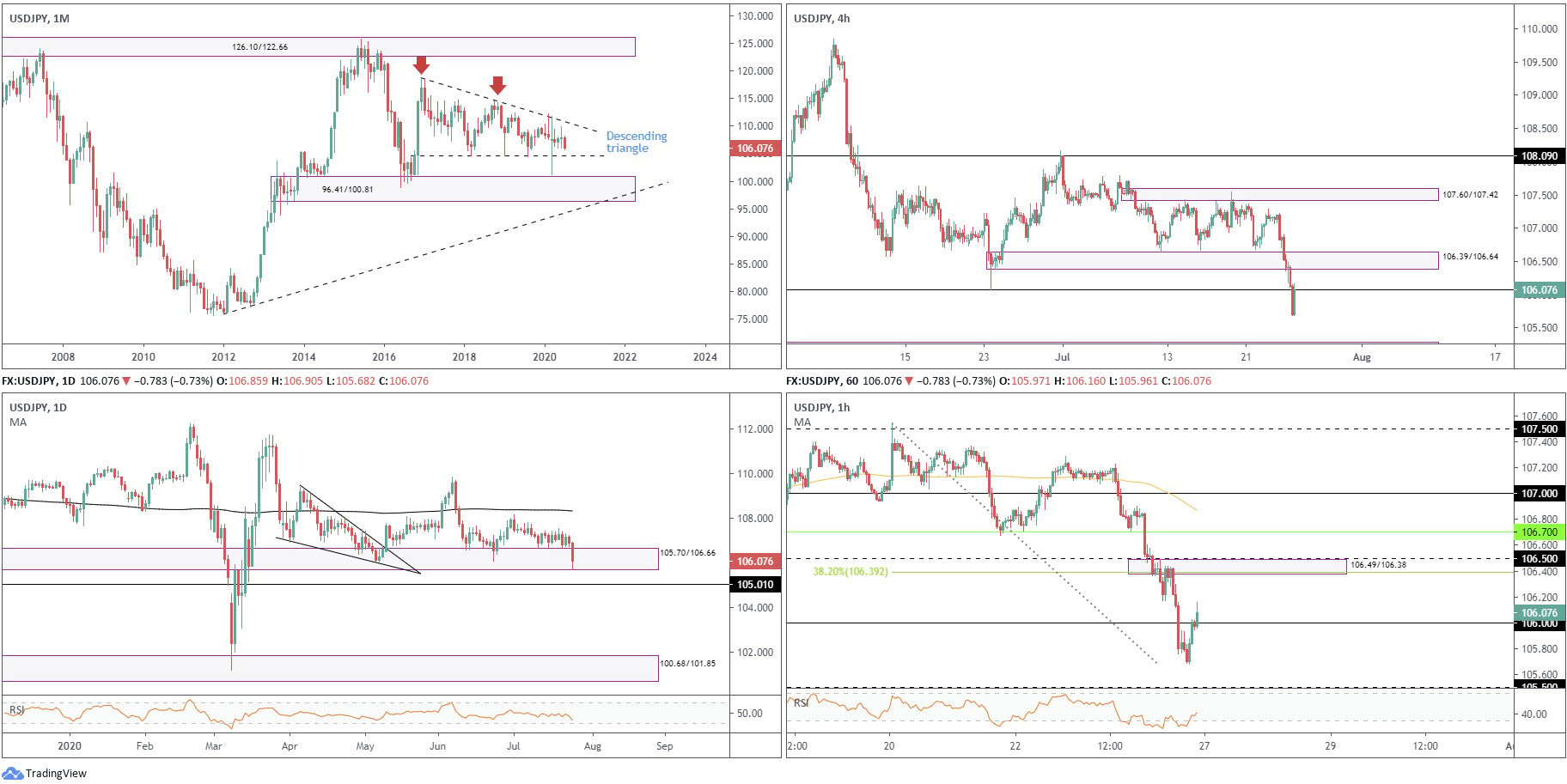 GBP/USD trades higher by 3.2% in July, with price action attempting to swarm long-term trendline resistance (1.7191) after support at 1.1904/1.2235 withstood downside attempts in April and May.

After mingling below the 200-day simple moving average at 1.2697 since July 9, Tuesday squeezed above the aforesaid value followed by a mid-week retest as support. Consequent to this, price action could work towards supply coming in from 1.3021/1.2844 this week.

The RSI oscillator, as you can see, is also closing in on overbought levels.

Last week’s analysis noted the possibility of a bullish pennant formation between 1.2768/1.2644. As you can see, Friday kicked through the upper borderline of the aforesaid pattern and docked just ahead of supply at 1.2851/1.2805.

The break of the bullish pennant, generally considered continuation patterns, potentially stirred a buy signal Friday, targeting 1.3008 (measured by calculating the preceding move and adding this value to the breakout point – pink). This implies we might observe a break of current supply this week.

Heading into the closing stages of Friday’s session, following an earlier run above 1.2750 resistance, price action addressed the underside of 1.28 and produced a shooting star candlestick pattern, considered a bearish signal at peaks. This also saw the RSI oscillator form bearish divergence south of overbought levels.

While monthly traders are seen attempting to secure position above trendline resistance, daily price is closing in on supply at 1.3021/1.2844 which is likely to hamper upside.

There is a chance of a mild whipsaw through 1.28 into H4 supply at 1.2851/1.2805 early week, which may encourage a sell-off. How much of a sell-off, however, is the million-dollar question given the H4 bullish pennant pattern recently making its presence felt and monthly showing signs of reaching for higher levels, as well as daily price displaying scope to challenge at least 1.2844 (lower ledge of supply).

A H1 close above 1.28 this week would, therefore, potentially be well received by buyers, taking aim at the underside of daily supply at 1.2844 as an initial base. 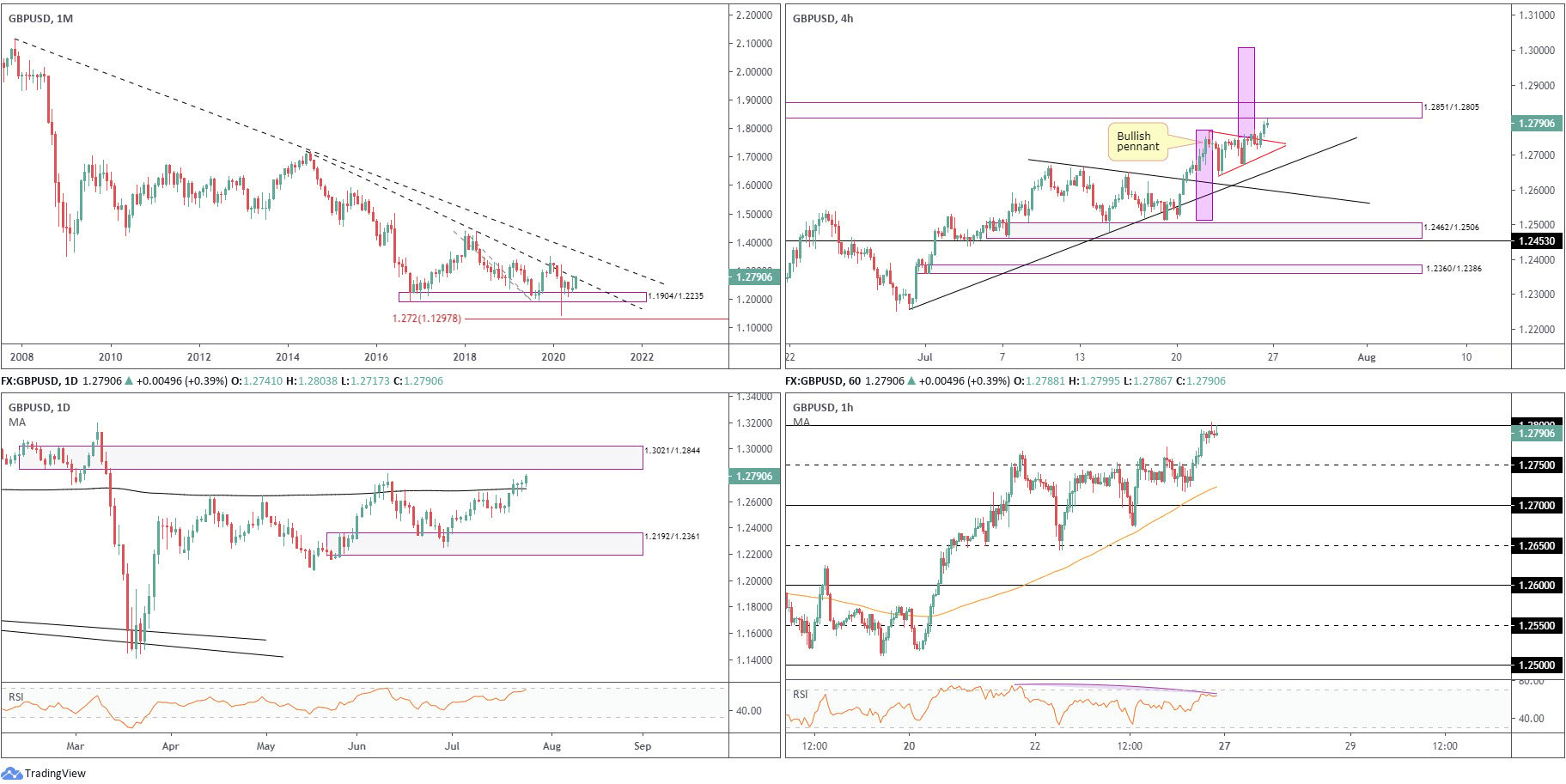