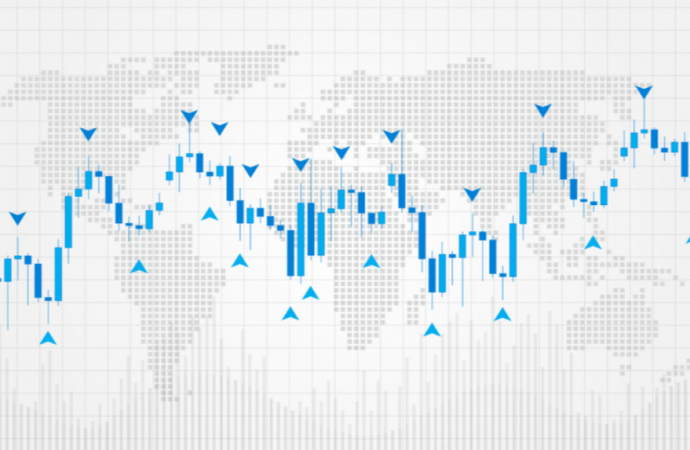 Harvesting fresh motivation from daily trendline resistance (102.99), the US dollar index, or DXY, sunk 1 percent last week and subsequently tested the resilience of daily demand at 92.71/93.14 (a drop-base-rally formation).

With the lower portion of the aforesaid demand challenged, potentially with enough juice to test stops, and Friday’s candle finishing around session lows, approaching daily support at 92.26 is a possibility this week (with a break targeting daily support at 90.99). Also interesting is the daily head and shoulder’s top construction (93.66/94.74/93.87) – traders will note last Tuesday observed price penetrate the pattern’s neckline (92.76).

In the context of trend, previous research remains valid:

Since March 2008, a large-scale pullback has been seen on the monthly timeframe (primary trend is considered south). The daily timeframe’s immediate trend, however, has also faced lower since March 2020.

Following four successive daily bull candles off descending support (prior resistance – 1.2011), sellers made an entrance from supply at 1.1872/1.1818 last week, a rally-base-drop configuration.

The RSI oscillator, for those who follow this particular indicator, will note the value recently flipped off trendline support (prior resistance) and is in the middle of establishing a trendline support from 33.60.

Confirmed by RSI hidden bullish divergence, Friday recognised 1.18 as a line of support in early London, carrying candle action above the 100-period simple moving average and testing supply at 1.1864/1.1853. Although an initial rejection formed heading into US trading (common viewing as we transition into the US session at support or resistance), sellers lacked drive.

Occupying the aforesaid supply today and neighbouring resistance at 1.1870 shines light on the 1.19 level.

Monthly supply at 1.1857/1.1352 recently having its upper boundary taken out, along with daily sellers echoing a relaxed attitude out of supply at 1.1872/1.1818, signals buyers may have an edge this week.

It is at 1.19, sellers may make an entrance (see H4 resistances), likely with enough fuel to force a notable correction. 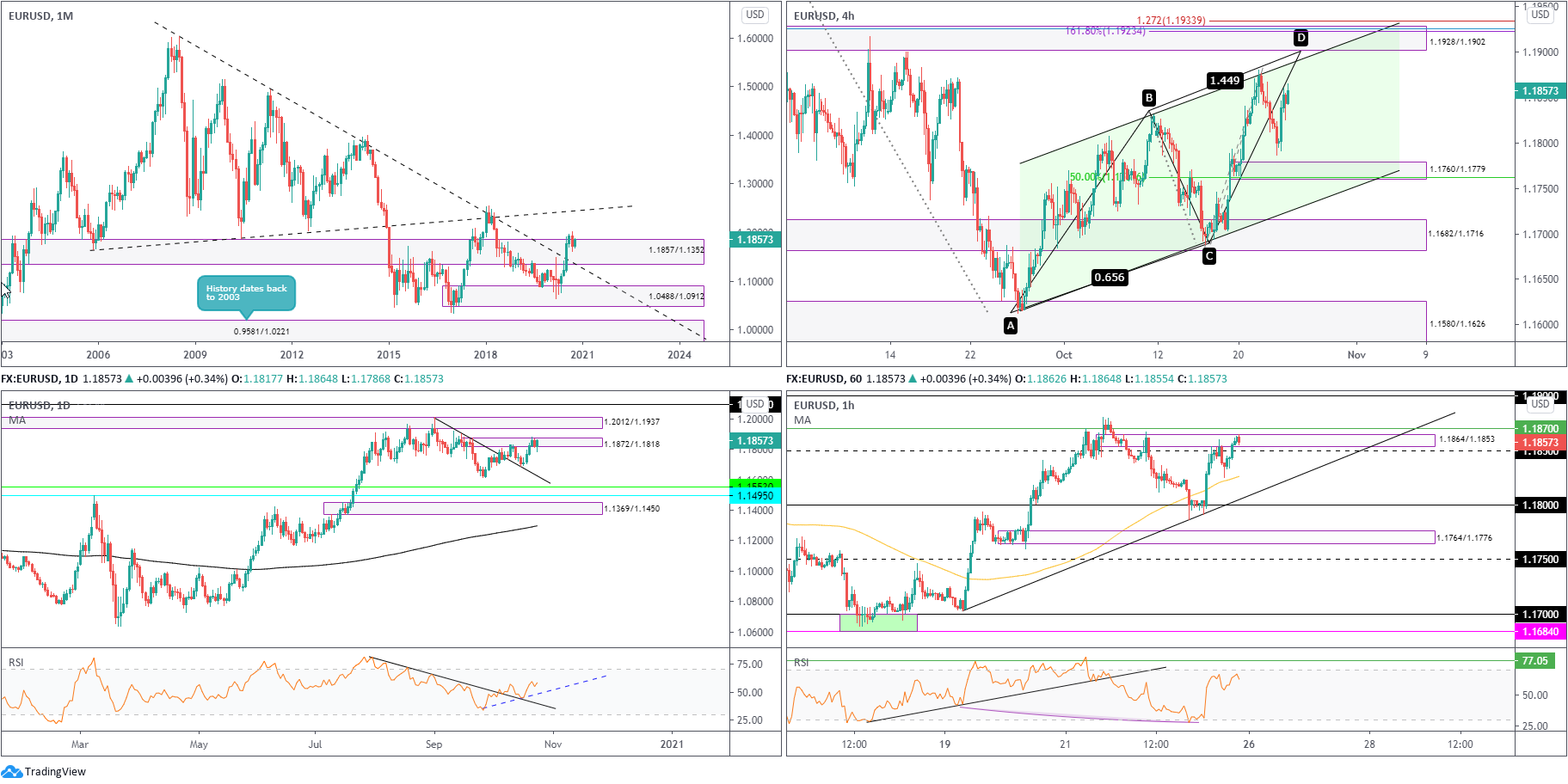 In terms of the RSI oscillator, 52.00 resistance remains a key watch, with a break likely to persuade the indicator to approach overbought terrain.

H4 supply at 0.7147/0.7170 and trendline resistance, nonetheless, is problematic for buyers, yet knowing higher timeframes trade from demand could surpass any H4 arrangement.

Interestingly, since August, daily price has also been in the process of shaping a descending triangle pattern between 106.94/104.18.

Traders will note supply at 106.33/105.78 aligns with the upper perimeter of the descending triangle, while the lower edge of the monthly descending triangle (green – 104.62) sits just north of the daily pattern’s lower border line.

Breaking beneath both the daily and monthly timeframe’s descending triangle supports this week shifts focus back to daily demand at 100.68/101.85, fastened to the upper edge of monthly demand at 96.41/100.81.

Yet, additional selling could take on the head and shoulder’s take-profit target, as per the pattern’s rules of engagement, around 103.95 (red), arranged just south of a 161.8% Fib projection at 104.11.

Longer term, we are at an interesting juncture, made up of monthly and daily descending triangle supports from 104.62 and 104.18, respectively. 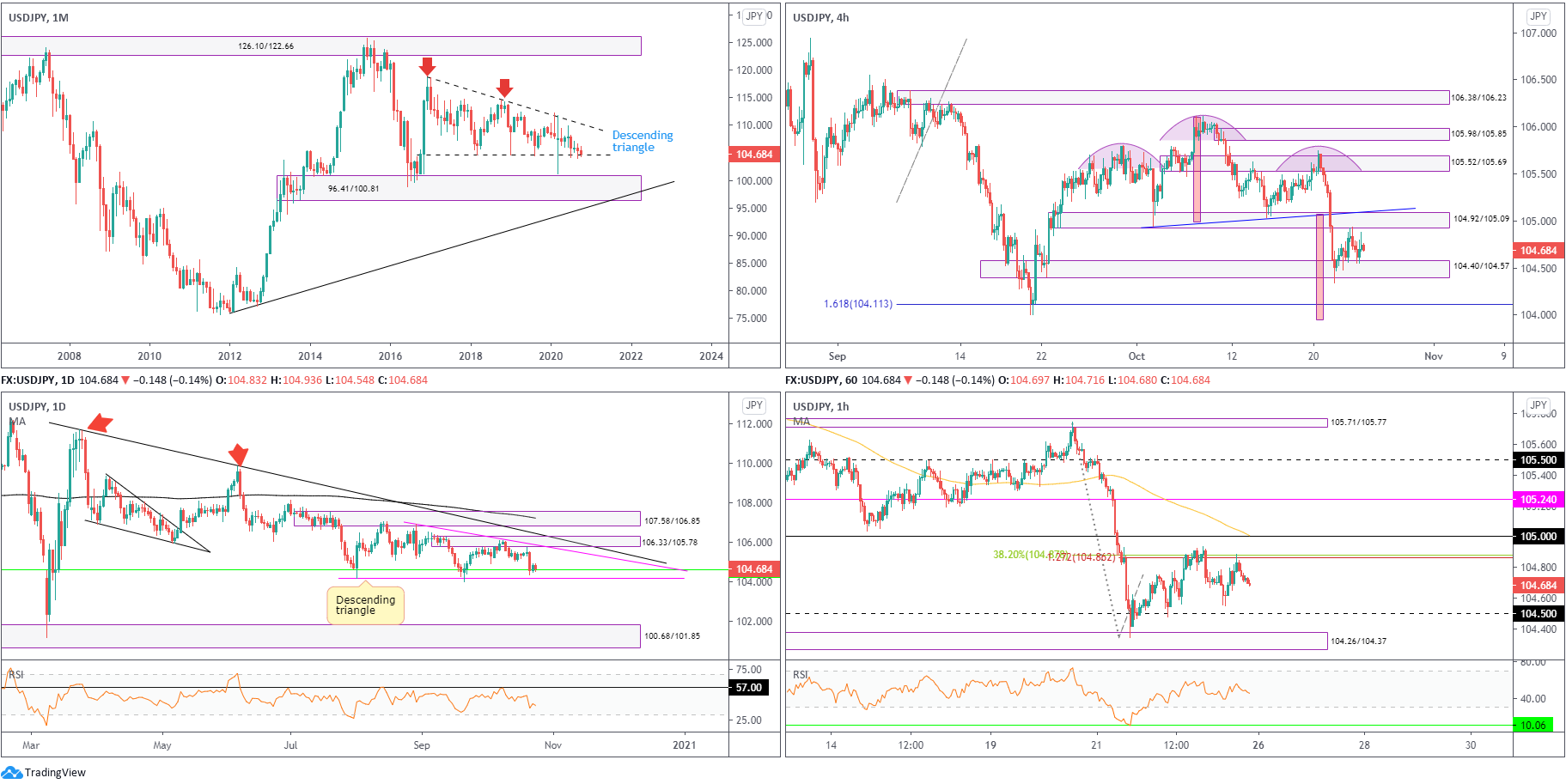 Leaving trendline resistance (2.1161) unopposed, the month of September fell 3.4 percent by way of a bearish outside reversal candle and snapped a three-month winning streak. This, in spite of October trading higher by 1 percent right now, advertises a possible dip to retest trendline support (prior resistance – 1.7191).

GBP/USD recently sailed to fresh pinnacles at 1.3176, surfacing a few pips below resistance at 1.3201.

Following this, the latter part of the week saw a mild correction, though nothing to really get excited about and not enough to shine light on demand at 1.2645/1.2773 (and the 200-day simple moving average). Also noteworthy on this timeframe is the RSI oscillator attempting to make its way above 60.00, balancing off 47.00 support.

After discovering thin air above 1.3116/1.3160 supply (prior demand) last week, a mild retracement phase emerged and set price action within a stone’s throw from an interesting zone of support (green) between 1.2973/1.3006 (formed from a collection of Fib studies and a support at 1.3006). Also worthy of mention is the nearby trendline support (1.2687).

Although the week ended flirting with the 100-period simple moving average, positioned under resistance at 1.3067, strong support is seen.

There are no immediate areas in play right now. Keeping an eye on the 1.3201 daily resistance, however, is recommended and also daily demand at 1.2645/1.2773, should further selling occur.

Breaking through the zones, nevertheless, will likely see immediate support at 1.2950 develop.