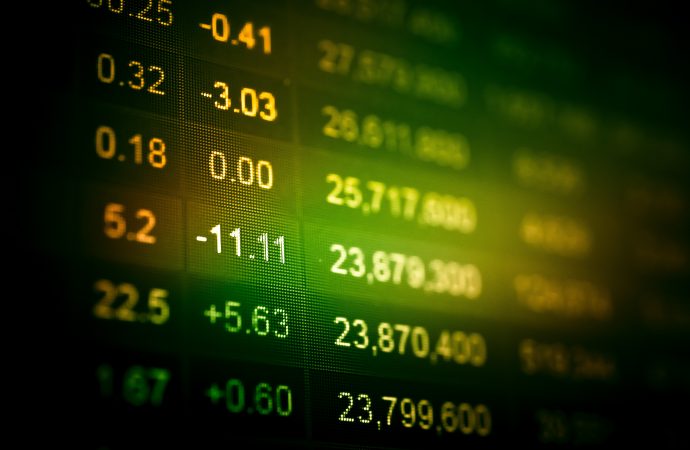 Shedding 0.9 percent, and delivering a third successive weekly loss, the US dollar, according to the US dollar index (ticker: DXY), continues to reflect a bearish climate.

91.00 support, as you can see, made an entrance early week, though came under fire after price failed to find acceptance north of resistance at 91.36, a prior Quasimodo support base. The absence of bullish intent from 91.00 unchains the possibility of additional selling, perhaps taking aim at support drawn from 90.00.

Chartists will note the DXY nudged beneath the 200-day simple moving average in early April, currently circling 92.08. As many traders will acknowledge, price action crossing below a moving average is generally interpreted as a bearish signal.

As aired in previous writing, trend studies have exhibited a downside bias since levelling off in March 2020, shaped by way of lower lows and lower highs (black arrows). Interestingly, the 93.43 31st March peak echoes the early stages of a bearish wave within the downtrend (dashed black arrow).

The RSI oscillator voyaged through 41.24 support in recent trading (now potential resistance), movement unearthing the chance of further downside momentum this week. Consequently, entering oversold space could be in store, targeting support at 21.36.

Following a three-month retracement slide, demand at 1.1857-1.1352 made an entrance and has sparked a bullish revival in April, up 3.1 percent MTD.

Erasing March losses, recent upside throws light on the possibility of fresh 2021 peaks, followed by a test of ascending resistance (prior support – 1.1641).

A soft US dollar (DXY < 91.00) underpinned a healthy EUR/USD bid Friday. This, together with technical buying out of monthly demand from 1.1857-1.1352, elevated the currency pair above resistance at 1.2058 and shined the technical spotlight on Quasimodo resistance at 1.2169 this week, followed by another Quasimodo formation at 1.2278.

Measured by the RSI oscillator, momentum remains to the upside. Overbought status, however, could be tested this week, in particular resistance at 80.39.

Traders entered the US session strongly on Friday, confronting Quasimodo resistance at 1.2070 (now labelled support) which established demand at 1.2049-1.2061.

Analysis also reveals psychological resistance at 1.21 was subsequently tested, which happens to represent the upper limit of H4 supply mentioned above at 1.2101-1.2059. North of 1.21 on the H1 scale, resistance stands at 1.2138.

As evident from the RSI oscillator, upside momentum could slow as we enter overbought space and target resistance from 78.97 (active since mid-January).

Monthly demand at 1.1857-1.1352 supports buying, with daily price confirming a bullish tone on Friday after crossing resistance parked at 1.2058.

A breakout scenario above 1.21 (targeting H1 resistance at 1.2138) could emerge early week, action likely to interest buyers due to higher timeframe structure.

The technical view from the RSI oscillator reveals momentum maintained position north of the 50.00 centreline last week, underlining a possible continuation higher to test channel resistance, extended from the high 80.12.

For those who read Friday’s technical briefing, you may recall the following (italics):

The technical landscape on the H1 scale shows price action carved out a dragonfly doji candlestick (typically viewed as a bullish candle at lows), a formation which pierced through 0.77 (likely tripping stops beneath the round number) and tapped the upper side of demand at 0.7679-0.7695. Note the said demand area represents the decision point to break above 0.77 in mid-April.

Any upside flow from 0.77 could take aim at the 100-period simple moving average at 0.7745, closely shadowed by supply at 0.7783-0.7760. In conjunction with H1 price action, the RSI shows signs of bullish divergence ahead of oversold territory.

As evident from the chart, Friday’s bullish narrative pulled the currency pair north of 0.77 and, despite bearish interest forming around the underside of the 100-period simple moving average, overthrew the SMA to test supply at 0.7783-0.7760. Note the supply test followed up with a retest of the SMA into the close.

The daily timeframe highlights resistance at 0.7817 as a key base this week. Technical elements also shine light on a possible bearish phase, targeting February’s low at 0.7563.

H1 supply at 0.7783-0.7760, however, could attract further selling, though given Thursday’s decline from the area, offers could be thin here. As such, technical studies point to the 0.78 figure this week as possible resistance. Not only does this base represent a H4 Quasimodo formation, daily resistance is also plotted just above it at 0.7817.

April, currently down 2.5 percent, is seen attempting to climb back through the breached descending resistance.

Over the course of the week, the technical research team called attention to demand at 107.58-106.85 (prior supply), an area sharing chart space with trendline support, etched from the low 102.59, and a 38.2% Fib level at 107.73. As you can see, Friday spiked into the aforesaid technical confluence and formed an end-of-week recovery tail.

In addition to the above, RSI action is seen hovering around 36.00, threatening to test oversold space—in particular support at 28.19.

For those who read Friday’s technical briefing you will note the following (italics):

Should the pair explore lower levels and test H4 support at 107.44, this barrier packs more of a bullish punch, having seen the base align with daily demand at 107.58-106.85 (and associated technical confluence on the daily scale).

Aided by an RSI oversold signal—just north of RSI support at 18.76—Friday had price action rebound from demand at 107.52-107.65 (despite a modest breach) and crossed swords with 108 resistance. Chartists will note the psychological resistance is accompanied by trendline resistance, etched from the high 110.55, and the 100-period simple moving average (circling around 108.06).

Assessing the RSI shows traders that momentum attempted to find grip above the 50.00 centreline, though after price action tested the 108 neighbourhood, momentum levelled off and guided the RSI marginally south of 50.00.

The technical confluence displayed on the daily timeframe around demand at 107.58-106.85 has interested buyers, which may encourage further upside this week.

The above is bolstered by the fact the USD/JPY has explored higher terrain since the beginning of the year.

Short-term traders will likely hone in on the 108 figure early week. While 108 (and associated confluence) could trigger bearish sentiment, the reaction from daily demand may squeeze sellers out of the market here.

The British pound staged a modest comeback against the US dollar Friday, aided by upbeat British retail sales in March (5.4 percent versus 1.5 percent consensus) and USD weakness.

Technical structure to be mindful of this week is trendline support-turned resistance, taken from the low 1.1409, positioned ahead of Quasimodo resistance at 1.4250. Lower on the curve, 1.3670 bottoms are visible, arranged north of Quasimodo support at 1.3609 and associated Fibonacci confluence (commonly referred to as a Fib cluster).

Upside momentum slowed at the beginning of last week, with the RSI dipping south of overbought space and testing the 50.00ish range.

1.3809-1.3832 demand made a show in the latter part of last week, an area boasting strong upside momentum from its base.

RSI resistance remains a key level at 54.88 to be aware of early week, delivering key support/resistance since mid-April.

Despite recent hesitation within February’s range, the monthly timeframe shows a trendline resistance breach occurred late 2020. Should the 1.4376 top be engulfed, longer-term buying may become a key theme in this market.

Daily areas to watch this week are Quasimodo support at 1.3609 and trendline support-turned resistance, drawn from the low 1.1409.

Similarly, while H1 descending support garnered the attention of buyers late last week, a whipsaw through this base could be in store to test 1.38. Not only is 1.38 joined with interesting Fib studies (1.618 is known as the Golden Ratio; the inverse to this figure is 0.618), trendline support is also seen circling the area. Another consideration is that a whipsaw through the H1 descending support to 1.38 may trip stops below H4 demand at 1.3809-1.3832, therefore perhaps providing 1.38 bids with fuel.