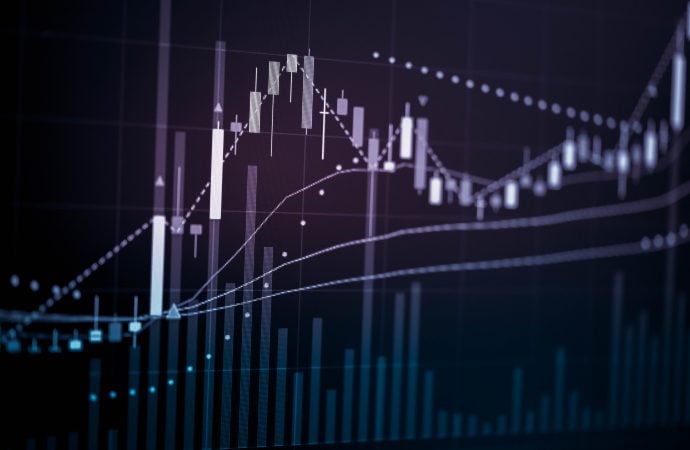 The US dollar index, or more commonly referred to as the DXY, found itself lower by 0.5 percent last week. Within a stone’s throw from the 91.00 level, the DXY snapped a two-week winning streak and introduced the possibility of reconnecting with daily support at 89.34 this week.

Organised as a series of lower lows and highs in 2020, the US dollar has been entrenched within a clear downtrend (seen on both weekly and daily charts). Submerging the 88.25 February 16 low (2018) may help further validate the current bearish narrative.

What’s also technically relevant is the daily RSI indicator came into contact with its descending wedge target (black arrows) in early trading last week. Momentum, as you can see, has since contracted, consequently moving trendline support (previous resistance) in the crosshairs this week.

Sustained buying invites the possibility of retesting 2021 tops at 1.2349 this week.

Interestingly, the RSI value also ended marginally above the 50.00 centreline on Friday and shifted focus towards resistance at 60.30.

Resistance at 1.2164 failed to perform heading into the latter part of last week, with the level serving as support on Friday.

As you can see from the H1 chart, volatility diminished considerably on Friday, limited by AB=CD resistance at 1.2177 and demand at 1.2165/1.2149 (prior supply). External levels to be mindful of early this week are the 100-period simple moving average and the 1.22 level.

Also of technical relevance is RSI support around the 50.00 centreline.

Recent developments show a bullish pennant pattern establishing a foothold, formed between the 2021 high at 0.7820 and January 4 low at 0.7642.

Out of the RSI indicator, the value remains entrenched within a descending channel. Support is seen at 52.00, while resistance is set around 80.19.

The daily timeframe’s bullish pennant pattern, according to the H4 chart’s technical framework, is forming between demand at 0.7665/0.7644 (prior supply) and resistance at 0.7805.

Stimulated by a modestly healthy USD and risk sentiment taking a hit, Friday watched AUD/USD snap a three-day winning streak and retest resistance at 0.7728, a level accompanied by the 100-period simple moving average.

With reference to the RSI indicator, the line recovered from oversold space Friday and finished the week slightly correcting ahead of 50.00 to 35.00.

From monthly and daily charts, traders are, according to the technical drawings presented here, gifted with a bullish outlook. The monthly timeframe displays scope to climb, while the daily timeframe forms a well-known bullish pattern.

In attempt to remain aligned with a higher timeframe perspective, the 0.77 level and demand at 0.7654/0.7672 are areas buyers could be drawn to this week on the H1 chart.

Also prominent is the RSI indicator crossing paths with resistance at 57.00, a level hindering upside since July 2020.

Overhead, a local trendline resistance (104.39) is seen on the H4 chart, while downstream Fib enthusiasts will note a Fib cluster around 103.28 (this simply represents a collection of Fibonacci levels formed around a specific price level).

Following an early 103.50 retest on Friday, short-term price action made its way above the 38.2% Fib level at 103.72 and 100-period simple moving average. The 38.2% Fib is commonly recognised as an initial take-profit objective out of AB=CD patterns, which we saw form last Thursday around 103.32.

The mild end-of-day correction, however, ended with price movement retesting the 100-period simple moving average and 38.2% Fib combination. Holding here promotes the possibility of reaching the 61.8% Fib level at 103.97 (considered the second take-profit objective out of the AB=CD pattern), alongside the 104 level and supply taken at 104.03/104.10.

With respect to the RSI indicator, the value fell sharply from overbought status Friday, leaning on the 50.00 centreline going into the close.

104.62 resistance on the monthly timeframe may be watched this week (the lower side of the descending triangle pattern).

The daily support at 103.08 and nearby daily trendline resistance are also likely on the radar for many traders going forward.

The H4 Fib cluster around 103.28 is perhaps appealing to Fib fans this week, yet to reach here price must pierce the H1 AB=CD support at 103.32.

Buyers stepped back Friday after Thursday refreshed 2021 tops at 1.3745, trimming a three-day winning streak ahead of resistance at 1.3755.

In light of last Wednesday’s 1.3618/1.3637 test perhaps consuming the majority of buyers, Friday’s recovery may fail to attract bullish flow in early movement this week. Demand at 1.3502/1.3536, therefore, could be worth making a note of.

The 100-period simple moving average made a stand on Friday around 1.3650 and waved in modest buying.

The 1.37 level remains unopposed, with price sculpting a shooting star candle ahead of the level going into the close. Stripping the 100-period SMA this week brings light to a possible 1.36 test, seated just under H4 demand at 1.3618/1.3637.

Also of technical interest is the RSI indicator forming a descending wedge. The value currently stands just under the 50.00 centreline, at 44.32.

Although the monthly timeframe shows buyers have room to move higher, the daily timeframe’s resistance at 1.3755 may dampen bullish commitment this week.

H1 price taking on 1.37, on the other hand, places buyers in a good position to attempt to overrun H4 resistance again at 1.3711.