Buyers and sellers, as you can see, spent the best part of the week squaring off around daily support at 92.26, an active level since May 2018. The feeble recovery off this level earlier in the month, braced by daily channel support (0.9247), signals a lack of commitment from buyers. Although suggesting a continuation to the downside this week, however, daily supply forged between 94.02/93.82 remains an area of focus.

As reported in recent writing, the primary trend on the monthly timeframe, since March 2008, has been entrenched within a large-scale pullback, though since 2017 has uncovered resistance off 103. Additionally, the daily timeframe (off 103.00) has moulded a series of lower highs and lower lows from March 2020. Traders will also note price crossed under the 200-day simple moving average, currently circling 96.21, heading into June of this year. Adding to this bearish narrative, the daily RSI oscillator continues to depreciate within a descending channel, with the value tentatively holding below 50.00.

As a result, technical studies argue for a bearish vibe this week – dethroning daily support at 92.26 and addressing support from 90.99 is a possible theme.

Following the break of long-term trendline resistance (1.6038) in July, buyers and sellers have since gone toe-to-toe around the upper section of supply from 1.1857/1.1352. Though this argues additional upside may be on the horizon, targeting ascending resistance (prior support – 1.1641), a dip to retest the recently penetrated trendline resistance (support) is also still on the table.

Trend remains to the upside, with price currently working with an early falling wedge correction (pattern) between 1.2011 and 1.1612 – some may interpret this arrangement as a descending triangle pattern.

RSI fans will also note the value recently rotated higher above 50.00, suggesting strength, though is rooted within the upper region of an ascending channel.

Friday’s outlook specified that 1.19 stands as possible resistance, while a correction could have dip-buyers surface from demand at 1.1836/1.1846, located beneath support at 1.1851 and the 100-period simple moving average.

Heading into the US session Friday, the pair made contact with 1.1851 support but upside attempts have so far been blocked by the 100-period simple moving average around 1.1860 (realised beneath supply at 1.1874/1.1866).

With reference to the RSI oscillator, momentum gradually declined Friday, penetrating the 50.00 line after topping ahead of overbought levels.

Following a mild correction that addressed the upper border of demand at 0.7029/0.6664 (prior supply), buyers have so far responded well. Up by 3.9 percent in November, buyers appear to be free to explore as far north as 0.8303/0.8082 in the coming months, a supply zone aligning closely with trendline resistance (prior support – 0.4776).

Supply at 0.7345/0.7287 (a rally-base-drop formation) has remained in the frame since November 9, yet sellers have so far displayed a non-committal tone as monthly buyers continue to flex off demand. Neighbouring supply at 0.7453/0.7384, extended from August 2018, therefore, could soon be thrown in the mix.

The week witnessed the formation of a declining channel (0.7340/0.7272), following Tuesday’s 0.7340 resistance test. As you can see, the session finished marginally fading channel resistance by way of a shooting star candlestick pattern, generally interpreted as a bearish signal at peaks.

Lower moves this week may target channel support and support brought in at 0.7210.

Despite a brief episode of consolidation beneath 0.73 and the 100-period simple moving average Friday, buyers eventually gathered enough steam to overturn the aforesaid resistances amidst European trade.

This observed a peak at 0.7324, accompanied by a mild correction that nudged action to within close range of 0.73 and the 100-period simple moving average by the close.

RSI fans may note the value recently pencilled in a rising wedge pattern, with late trade Friday ever so slightly testing waters beneath its lower border.

H1 is on course to reconnect with 0.73 support (and 100-period simple moving average). Buyers from this point, nonetheless, despite higher timeframes indicating strength to the upside, must confront possible selling off H4 channel resistance (0.7340).

November, as you can see, is working through the lower edge of the aforesaid pattern, down by 0.8 percent.

Leaving behind supply from 106.33/105.78 and trendline resistance (111.68), as well as RSI resistance at 57.00, sellers have since made a strong show in the shape of six successive daily bear candles.

104.11 resistance stood firm in the second half of last week, hindering efforts to navigate higher.

Monthly price beginning to tunnel through descending triangle support at 104.62 signals sellers are gathering strength. This is somewhat validated on the daily timeframe, with space seen for sellers to approach the 103.17 low and demand at 100.68/101.85 (fastened to the upper side of monthly demand at 96.41/100.81). 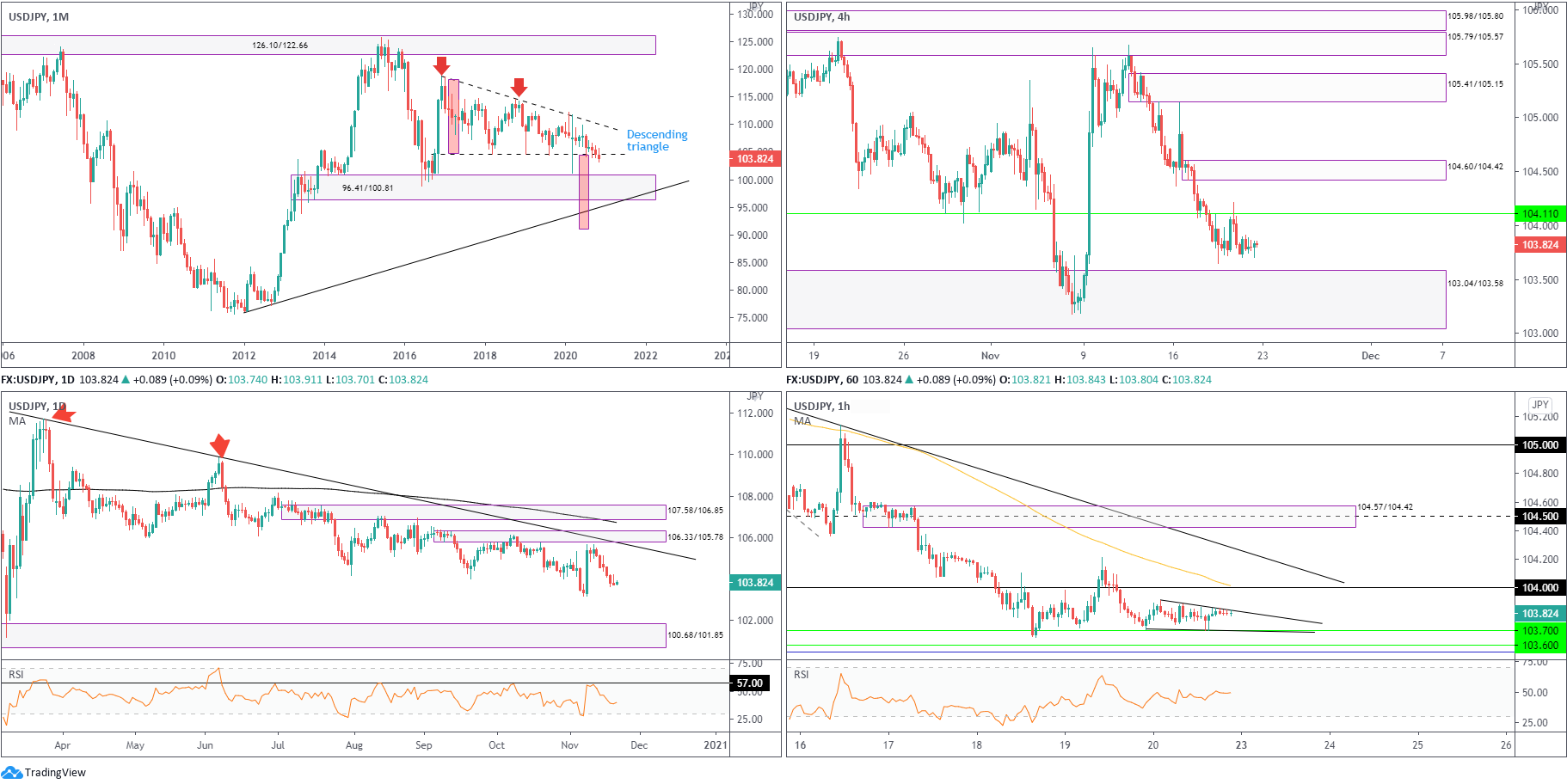 November trading higher by 2.6 percent places trendline resistance (2.1161) in the line of fire on the monthly chart.

In terms of trend, nevertheless, the primary trend has faced lower since early 2008, unbroken (as of current price) until 1.4376 gives way – April high 2018.

Since crossing paths with demand at 1.2645/1.2773 and 200-day simple moving average in late September, GBP/USD has displayed a gradual interest to the upside.

Taking on higher levels this week targets the 1.3483 September peak, with a break to confirm the current uptrend on this timeframe (since early 2020).

RSI followers will see the line has produced a series of higher highs and lows since late September, on course to perhaps welcome overbought conditions.

With strength emerging into the second half of the week, clearing the above said supply this week could have supply at 1.3402/1.3368 move into position.

Thursday’s US session kicked off by way of a hammer candlestick configuration off 1.32 (bullish signal), encouraging fresh buyers on to the scene. Friday, albeit unhurriedly, extended Thursday’s rebound, crawling along the underside of trendline resistance (prior support – 1.2853) towards 1.33 (with a subsequent push to welcome supply at 1.3339/1.3322 [from September]).

In regards to the RSI indicator, Friday forced the value into consolidation, balanced off 50.00 support. This suggests upside momentum may be slowing.

With higher timeframes demonstrating some leeway to the upside, H4 supply at 1.3320/1.3281 exhibits weakness. Another point also worth taking on board is the fact sellers failed to test H4 support at 1.3182, indicating a lack of commitment.