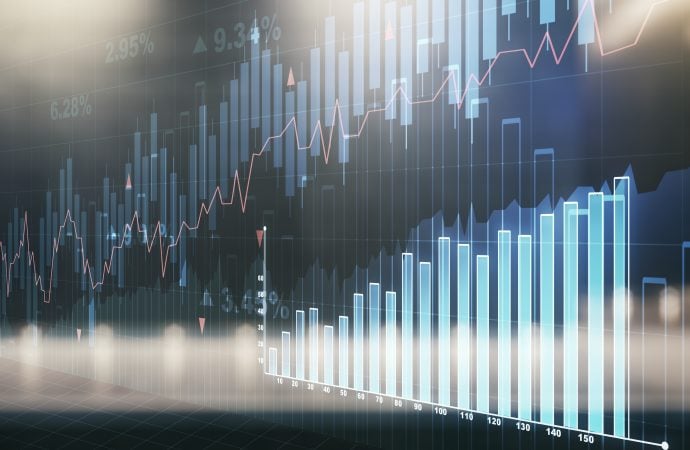 According to the US dollar index (ticker: DXY), dollar bulls entered an offensive phase last week, awakened on the back of a hawkish Fed tailwind.

In terms of trend, while the DXY has been underwater since topping in early 2020—by way of well-defined lower lows and lower highs (black arrows)—the question is whether recent USD optimism is the beginning of a trend change? On the basis of technical trend studies presented here, a bullish revival could be on the cards if the 94.74 25th September high is overrun (blue arrow). Of course, some technicians will view last week’s price close above the 200-day simple moving average as a bullish cue.

Prior to crossing swords with 94.74, price must confront the 93.43 31st March high, closely shadowed by Quasimodo resistance drawn from 93.90.

Unsurprisingly, the RSI indicator (a popular gauge of momentum) entered overbought on Friday, stroking levels not seen since early March 2020 (73.00). Despite overbought conditions, this oscillator can remain overbought for prolonged periods. Exiting overbought, nevertheless, is a bearish sign some traders watch for; others seek what’s known as bearish divergence and failure swings.

Down 3 percent MTD, June is clearly on the ropes.

A $1.1836 breach, on the other hand, helps validate the bearish tone, highlighting Quasimodo support from $1.1688.

On the side of a bullish theme off $1.1836, however, is the RSI oscillator, recently nosediving into oversold terrain and establishing what many traders will view as hidden bullish divergence—commonly forms a trend continuation signal that suggests trend strength remains, despite momentum producing negative signals. Essentially, this consists of the RSI pulling out a lower low and price action forming a higher low.

H4, as you can see, discovered a degree of support off the Quasimodo formation at $1.1899 at the tail end of the week, though was brushed aside as the USD continued to flex its financial muscle.

From the RSI, the value shows momentum crawling higher, balancing off trendline support, taken from the low 8.62. Though, traders are unlikely to take this seriously until the indicator climbs the 50.00 centreline.

Thanks to a strong-willed decline, monthly support at $1.1857-1.1352 is back in the frame. In similar fashion, daily price is on the doorstep of Quasimodo support from $1.1836, emphasising a bullish setting this week.

An alternative short-term bearish scenario to potentially decorate the H1 chart is a whipsaw through $1.19 offers—tripping stops—to fuel offers around resistance at $1.1926.

June is currently down by 3.2 percent.

Harmonic traders will acknowledge the 100% value represents an AB=CD bullish formation. And with this, we can therefore accommodate the B-C 1.27% Fib extension at $0.7425.

The above—alongside the RSI indicator dropping in on oversold territory—underlines a bullish theme if the demand base is tested this week.

Several support levels stepped aside last week, including Quasimodo support at $0.7507 which welcomed a resistance test on Friday. This unlocked the trapdoor to possible follow-through selling this week until support at $0.7440.

Friday, as you can see, attempted to reclaim 0.75+ status but found $0.7511 resistance too much of a ceiling and subsequently had price action refresh session lows into the close.

Downstream, technical support is not expected to develop until around $0.7450ish, which happens to dovetail closely with the upper side of daily demand at $0.7453.

Interestingly, although price forged fresh lows, the RSI indicator, a measure of momentum, shows momentum gradually climbing, aided by support within oversold at 19.30.

Longer term, technical eyes (in particular price action traders) will be on the daily timeframe’s demand zone at $0.7453-0.7384. Aside from housing a number of Fib studies and an AB=CD bullish configuration, monthly support resides within the lower boundary at $0.7394. As such, this is a location the chart may witness bulls attempt to make a stand this week.

Against the backdrop of higher-timeframe structure, the lower timeframes—H4 and H1—reveal fresh air to the downside until H1 support at $0.7450, followed by H4 support at $0.7440.

With the above, technical studies suggest a short-term bearish theme until $0.7450ish, at which point traders might abandon shorts and shift to longs in response to daily demand mentioned above at $0.7453-0.7384.

Long-term resistance at ¥110.94-110.29—posted under supply at ¥111.73-111.19—made a show in recent movement, with Thursday enticing bearish flow and erasing a large portion of Wednesday’s upside. You will note, however, Friday lacked direction and consequently fashioned what’s known as a doji indecision candle.

Downside structure to be cognisant of this week are lows around ¥109.19 (upper green oval), closely shadowed by ¥108.60ish lows (lower green oval), with subsequent selling to perhaps bump heads with supply-turned demand at ¥107.58-106.85.

Trend studies reveal the pair has been trending higher since the beginning of the year, though discovered a top heading into early April. Recent research also showed the RSI continues to oscillate around resistance at 57.00. Additional RSI structure is found at support from 28.19 and resistance drawn from 83.02.

Early London hours on Friday acknowledged the ¥110 figure. Powered on the back of St. Louis Fed President James Bullard noting the central bank’s latest shift was a natural response to economic growth, USD/JPY reached ¥110.48. Nevertheless, heading into the early hours of US trading handed the baton to sellers, presumably weighed by waning US Treasury yields (benchmark 10-year yield down more than 4 percent).

Though ¥110 remains support, it’s worth pencilling in Quasimodo support situated at ¥109.91. Psychological levels (¥110) often provide a home for a crowd of orders, and the majority, in this case, would site stops (from both buyers attempting to fade and breakout sellers) just south of the level. This opens up a stop-run scenario, with price perhaps fading stops off ¥109.91.

In terms of momentum, the RSI oscillator finished the week circling the 50.00 centreline, following an earlier bottom ahead of oversold space.

The long-term monthly chart is in the process of attempting to take hold of a breached descending resistance-turned possible support, while daily price engages with resistance at ¥110.94-110.29.

Then again, knowing the monthly scale is in the process of attempting to take hold of a breached descending resistance, the H1 chart may witness a whipsaw through ¥110 bids to fuel (stops) bids at Quasimodo support from ¥109.91 for a possible bullish play. Though, be aware that should ¥110 give in, ¥109.50 on the H4, as stated above, is likely the next downside objective, conveniently aligning with H1 demand at ¥109.44-109.55.

The pendulum moved in favour of buyers following December’s 2.5 percent advance, stirring major trendline resistance, taken from the high $2.1161. May, despite diminished volatility during March and April, traded firmly on the front foot, up by 2.8 percent.

Despite the trendline breach (which could serve as support if retested), primary trend structure has faced lower since early 2008, unbroken (as of current price) until $1.4376 gives way (April high 2018).

Arranged by way of three hefty bearish candles, driven amidst a Fed-induced USD bid, cable eked out its worst week since September 2020, down more than 2 percent.

According to the RSI indicator, the value is on the verge of entering oversold space, an area that could spark recovery interest.

Friday found itself under significant pressure—pressure that annihilated back-to-back Quasimodo support levels at $1.3876 and $1.3823 and uncovered another Quasimodo support base at $1.3761. What’s interesting is its position: nestled beneath 3rd May low at $1.3800. Below $1.3800 is a location breakout stops will be located, and once filled are perhaps sufficient to fuel bids off $1.3761. The question, of course, is whether the bids contain enough oomph to override bearish pressure?

With reference to the RSI indicator, the value discovered resistance around 40.00 while oversold space has provided support—common view during periods of selling. Between the 50.00 centreline and 40.00, therefore, may serve as an overbought trigger for the time being.

Brushing aside daily demand at $1.3857-1.3940 on Friday unzips a downside bias this week. According to the chart, scope to approach Quasimodo support at $1.3609 is seen.

Shorter-term charts focus on H4 Quasimodo support at $1.3761. The fact H1 bulls failed to build on the initial reaction from $1.38 Friday indicates the round number is hanging by a thread. A H1 close south of the number, therefore, might stir a short-term bearish scenario, targeting $1.3761, with further selling possibly on the cards given the daily timeframe’s technical position.