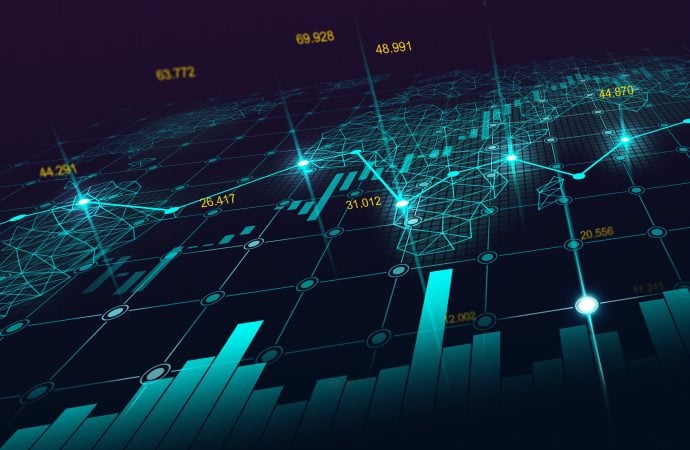 The June 10 recovery off daily support at 95.84, as you can see, launched a bear flag between 95.72/97.45. Recent weeks, though, observed price slip through the aforesaid flag’s lower boundary, introducing a sell signal and projecting moves as far south as 92.72 (take-profit target measured by calculating the preceding move and adding the value to the breakout point – purple). Daily support at 95.84 also re-entered the frame last week and so far, has withstood downside attempts.

In addition to the above, as featured in previous weekly reports, late May witnessed a push through the lower limit of a large bearish pennant configuration (98.27). Traders familiar with this pattern, therefore, may still acknowledge the possibility of moves forming as low as 93.97: the pennant take-profit target, measured by calculating the distance of the preceding move and adding the value to the breakout point (yellow).

Also referred to as half-mast formations, flags and pennants are considered continuation patterns and imply the US dollar index, or DXY, could dip beyond daily support underlined above at 95.84 this week.

After touching 1.1168 (June 19) a mild bid has been observed, which witnessed mid-week trade gather traction and retest the aforesaid PRZ. With daily support at 95.84 on the DXY offering a feeble tone right now, traders must prepare for the prospect of additional EUR/USD upside this week.

Holding under channel resistance this week has demand at 1.1324/1.1345 pinned as the next point of consideration, aligning with neighbouring channel support (1.1185). This assumes we pass Thursday’s low 1.1370.

Early Europe Friday voyaged above 1.14 in dominant fashion, after establishing a bottom off demand at 1.1361/1.1377. With sellers cutting their losses, price movement peaked just ahead of 1.1450 resistance, a touch above Thursday’s high.

Travelling through 1.1450 this week could lead to a push for the 1.15 neighbourhood, while a dip to 1.14 (and 100-period simple moving average) could also be in the offing.

Monthly supply at 1.1857/1.1352 and neighbouring long-term trendline resistance is likely to eventually hamper upside in this market.

The daily PRZ between 1.1462/1.1395 re-entered the frame last week. Although considerable structure, buyers appear to have the upper hand here for now.

As things stand, we have two conflicting signals on the higher timeframes this week. 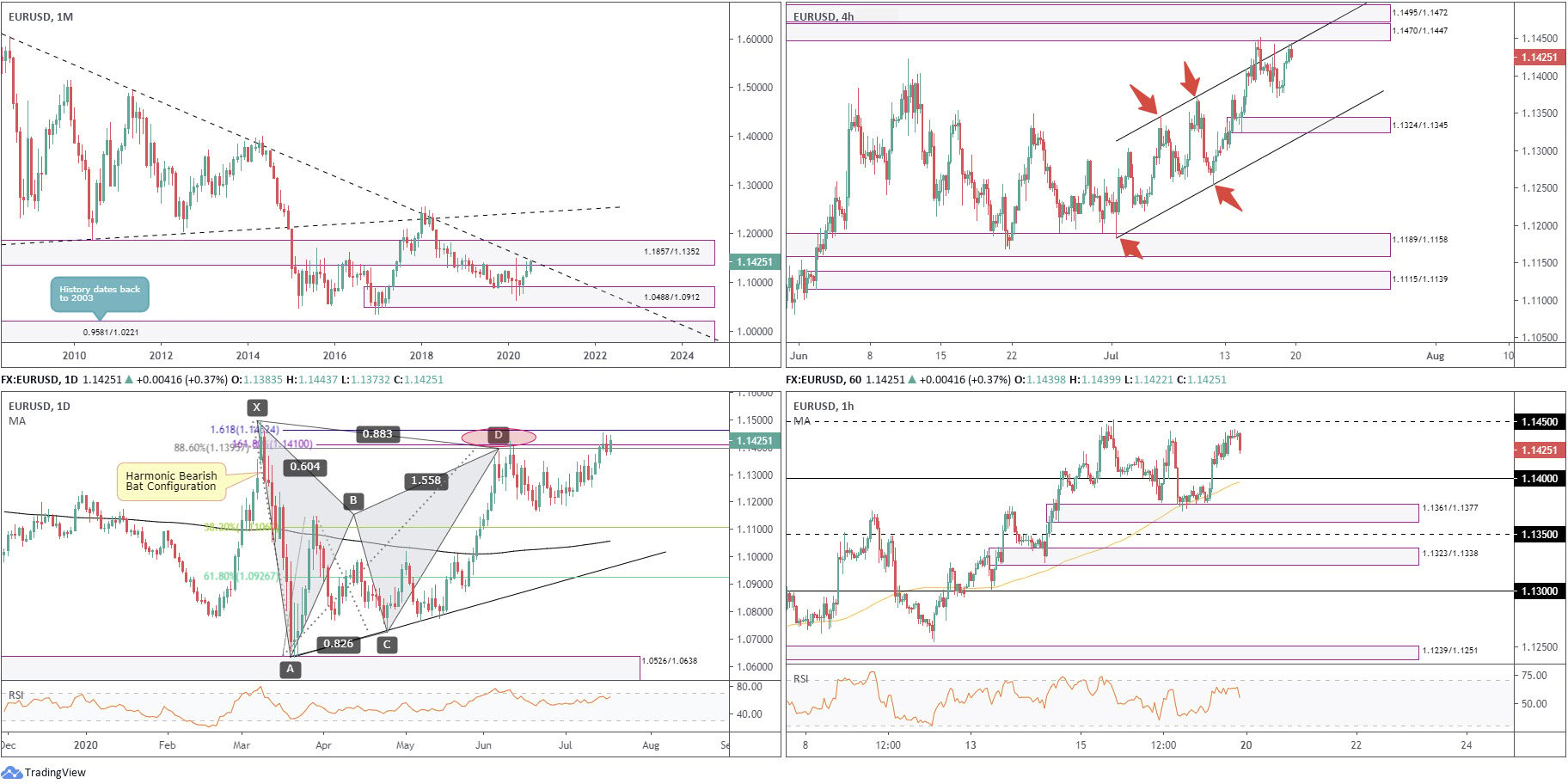 May’s extension, together with June’s follow-through, has supply at 0.7029/0.6664 echoing a vulnerable tone in July, particularly as intersecting long-term trendline resistance (1.0582) demonstrates signs of giving way.

Since ousting resistance at 0.6931 the level has been featured as support, with two nearby trendline resistances (prior supports – 0.6744/0.6671) visible to the upside.

In terms of the RSI oscillator, the value has been hovering south of overbought levels since mid-June.

Well-grounded support at 0.6926 could be a level we work with this week, located a few pips under trendline support (0.6776). Traders will note the aforesaid support also forms a close connection to daily support at 0.6931.

Supply at 0.7058/0.7029 is another base that deserves attention this week, an active zone since the beginning of the year.

Following a brief retest at the 100-period simple moving average heading into US hours Friday, sited just ahead of demand at 0.6961/0.6971, H1 rallied and mildly whipsawed through orders at 0.70.

Monthly reveals the possibility of closing above supply at 0.7029/0.6664, while buyers and sellers on the daily timeframe battle for position between support at 0.6931 and two trendline resistances.

Monday, however, could revisit H1 demand at 0.6961/0.6971. An alternative scenario is another whipsaw above 0.70, though this time may have the candles draw in additional sellers from resistance at 0.7011. A H1 close back beneath 0.70 will then likely be interpreted as a bearish signal. 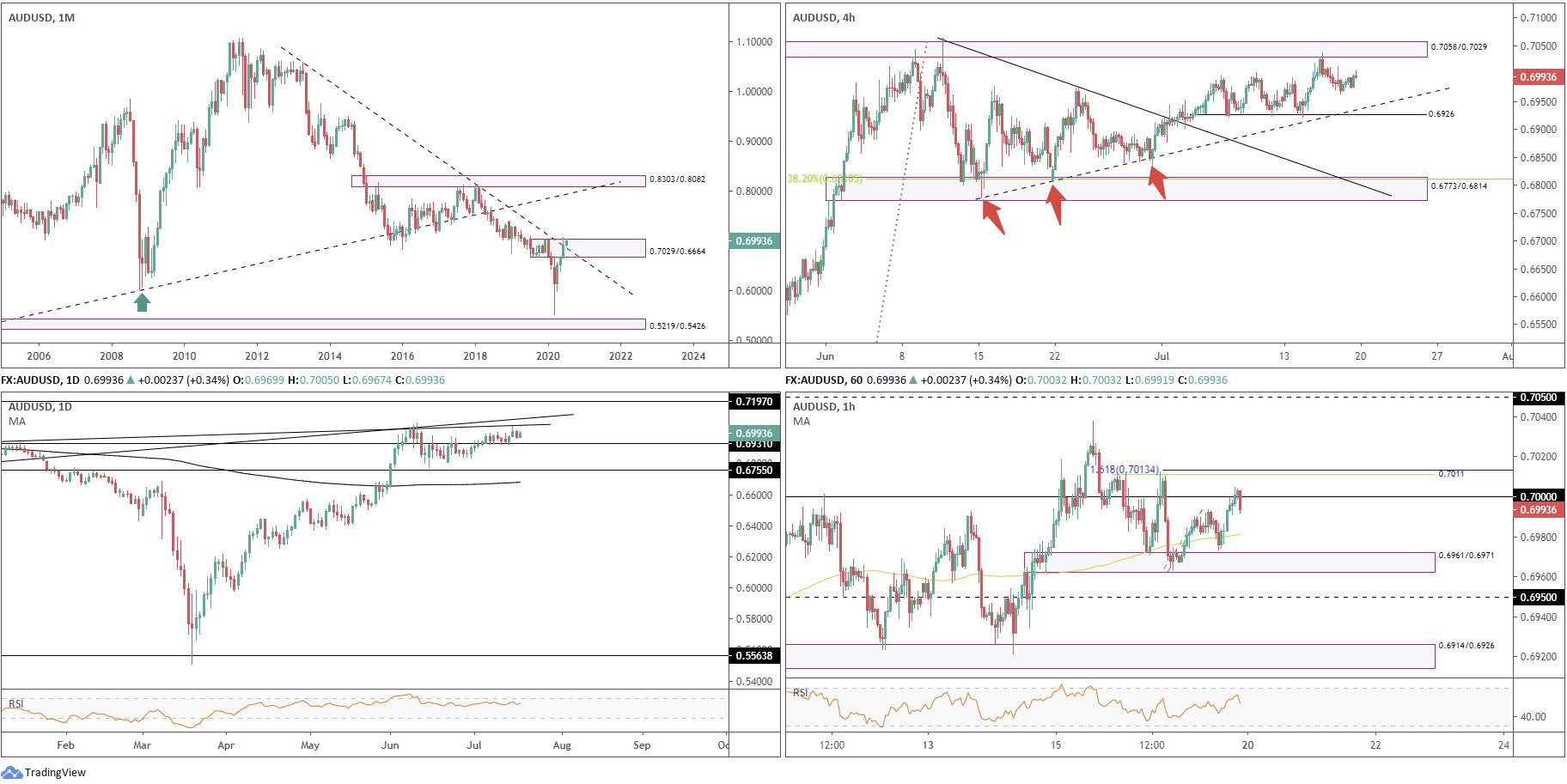 Demand at 105.70/106.66 remains in focus on the daily timeframe this week. Although a reasonably hardwearing zone since early May, buyers appear to be lacking spirit. The previous reaction on June 23, as you can see, failed to reach the 200-day simple moving average at 108.36 before rotating lower, emphasising buyer weakness.

Outside of the aforesaid range, peaks around 107.77 and the 108.09 level represents resistance, while through demand we can see support at 105.99.

US trading Friday witnessed USD/JPY test trendline resistance (prior support – 106.66) and squeeze through the 100-period simple moving average. This left the pathway clear for 107, which, despite a mild whipsaw to lows at 106.94, held into the week’s end.

Monthly price is somewhat directionless at the moment, caught within a descending triangle pattern.

Friday’s whipsaw below 107 was potentially a painful ordeal for intraday buyers, a move which likely tripped protective stop loss orders. The close back above 107 may draw in early buyers this week, targeting at least H1 supply at 107.24/107.16 (strong supply), followed by the lower ledge of H4 supply at 107.42.

Support at 1.1904/1.2235 and long-term trendline resistance (1.7191) offers clear structure to work with on the monthly timeframe, with the latter prompting a notable upper shadow in June.

Buyers and sellers, as you can see, continue to mingle below the 200-day simple moving average at 1.2696. Several candlestick patterns emerged over the week, however, providing a mixture of bullish and bearish signals.

After splitting channel support (1.2257) on the H4 timeframe, two core areas became available, demand at 1.2462/1.2506 and supply from 1.2720/1.2682. The former already made its presence known last Tuesday, generously rebounding price by way of a bullish engulfing candle.

Additional areas of interest fall in at support from 1.2453 and peaks (red oval) around 1.2667, which may delay price from reaching the aforesaid supply zone.

Monthly price is currently sandwiched between trendline resistance and support from 1.1904/1.2235.

1.26 offers valid resistance on the H1 this week, yet traders may want to note the possibility of a whipsaw forming through the round number into H1 supply coming in from 1.2627/1.2604. A H1 close beneath 1.26, after testing the aforesaid supply, would likely serve as a bearish signal towards at least the 100-period simple moving average.

Should we reach as far south as 1.25 on the H1 this week, a recovery from the base is a possibility, having seen the round number align with the upper boundary of H4 demand at 1.2506.