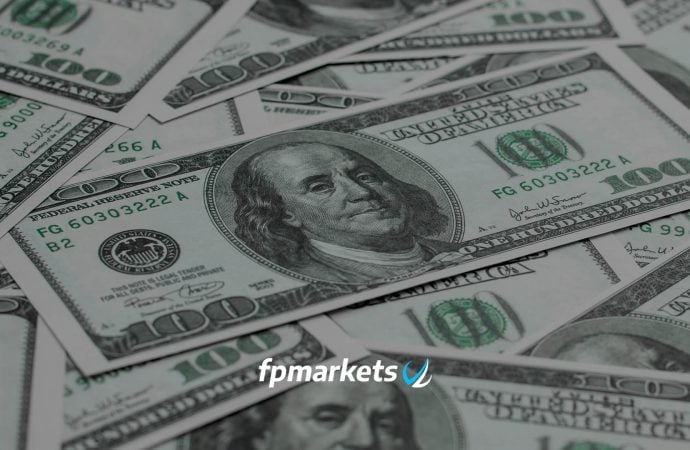 Following a timid start off best levels a few points ahead of 100.00, buyers fazed into the background last week.

Erasing 1.5%, the US dollar index, or DXY, extended losses for a second successive week and penetrated heavy-duty support on the daily timeframe.

According to the technical picture, the buck is tipped to browse lower levels this week.

April spent the best part of the month feasting on the top edge of 1.0488/1.0912, squeezing out a Japanese hammer candlestick pattern, typically viewed as a bullish reversal signal. May, as you can see, recovered off worst levels and wrapped up a few pips shy of monthly highs.

Against the $, the euro voyaged into positive terrain last week, dethroning the 200-day simple moving average at 1.1010.

As you can see, Friday faced intraday pressure ahead of the aforesaid supply, suggesting retest scenarios may occur at the recently penetrated trendline resistance and 1.1057/1.1013 this week.

Upside momentum slowed as we headed into month-end flow Friday, cementing a peak ahead of 1.1150 before reverting to a defensive play. Late US saw 1.11 enter the field with short-term movement trekking to lows at 1.1081, testing channel support (prior resistance – 1.0991) and swarming sell-stop liquidity. Beyond current supports, 1.1050 may offer a base to consider, a level plotted ahead of demand at 1.1033/1.1016 (prior supply).

Buyers, as you can see, attempted to reclaim 1.11, but failed to register anything noteworthy. In fact, candlestick traders will note the Japanese shooting star candlestick pattern off highs at 1.1108, considered a bearish signal.

Indicator-based traders may acknowledge the RSI oscillator forming support off its 50.00 point.

Should H1 buyers regain footing above 1.11, however, we could see buyers enter the fold quicker than expected and run for 1.1150 and beyond, according to the bigger picture.

Buyers and sellers spent the best part of the week squaring off around the 200-day simple moving average at 0.6654.

Also of note is the RSI nearing overbought territory.

What’s interesting here is the aforesaid supply is glued to the lower limit of monthly supply at 0.7029/0.6664.

Since Wednesday, short-term technicals have been in the process of building an ascending triangle pattern between 0.6675 and 0.6567, regarded as a continuation pattern. The take-profit target, assuming a breakout to the upside, is measured by taking the value of the base and adding this to the breakout point (yellow), seen at 0.6785 – a touch above daily supply.

Above the pattern, nevertheless, buyers face possible opposition off 0.67.

Monthly supply at 0.7029/0.6664 is a notable base in this market, one which will likely spark a move lower. After crossing the 200-day simple moving average on the daily timeframe, though, this could have price close in on supply at 0.6777/0.6736 before sellers make a show.

While H4 supply at 0.6695/0.6664 may contain upside attempts, the formation of a H1 ascending triangle will interest buyers this week, particularly if a H1 close outside of the pattern forms. However, buyers must then contend with the 0.67 handle and H4, daily and monthly supplies. Therefore, a breakout of the ascending triangle is unlikely to reach target. 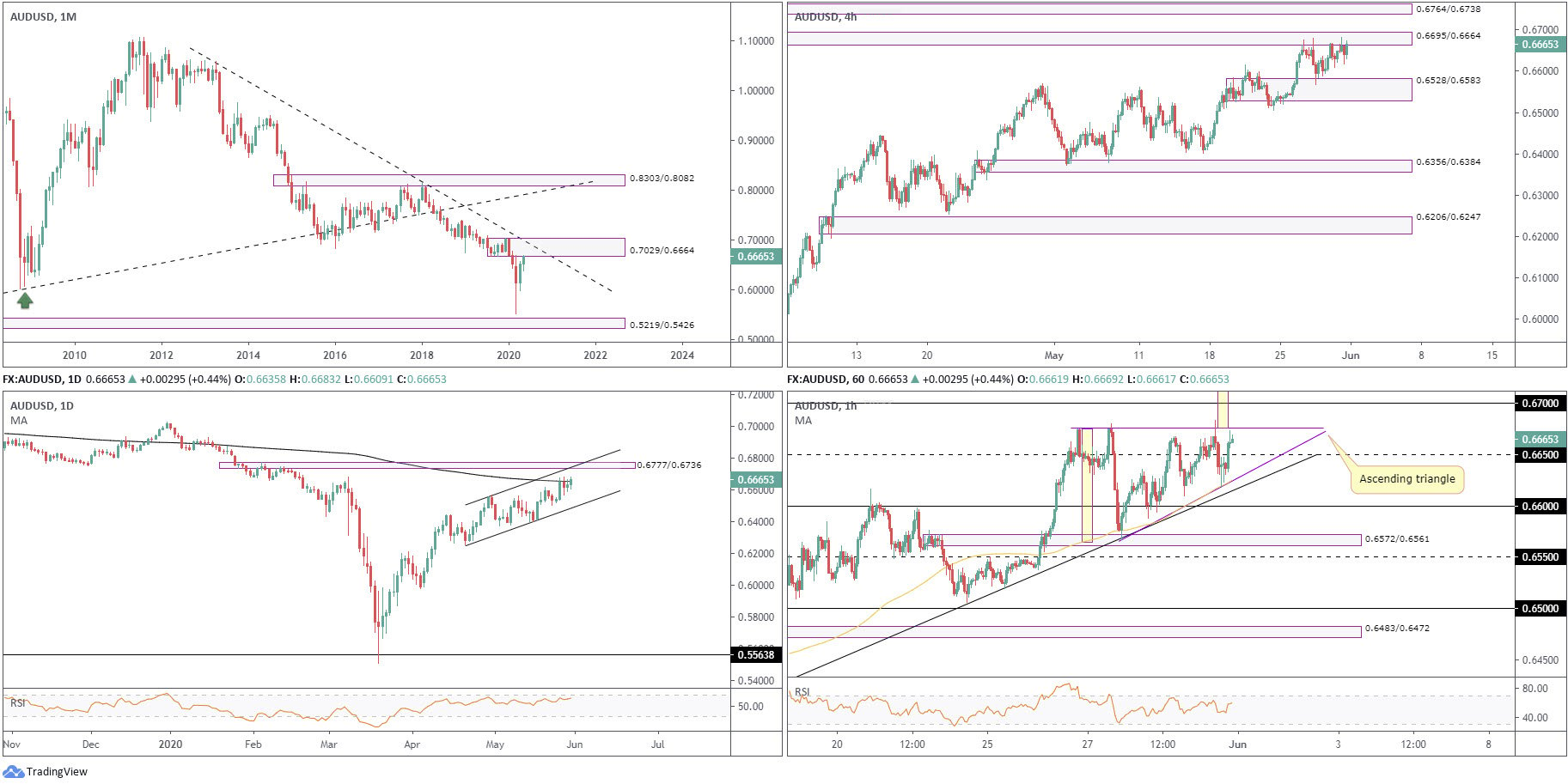 In order to reach the noted take-profit target, the 200-day simple moving average at 108.30 must be taken out.

Local demand at 107.21/107.41, an area withstanding a number of downside attempts in late May, suffered a minor rupture Friday. Leaving support at 106.91 unopposed, however, the pair swiftly reclaimed earlier losses and revisited current supply. A break of the latter advertises moves to supply coming in from 108.87/108.48, perhaps formed by way of an ABCD approach that completes around 108.44 (orange).

Whipsawing through demand at 107.15/107.23 and testing a 127.2% Fib ext. level at 107.10 heading into Europe Friday caused pain. Buyers out of demand had sell-stops tripped, a move which simultaneously caused a bear trap.

The stronger-than-expected recovery going into US trade sailed through the 100-period simple moving average and scored a high at 107.89. Despite nearby tops around 107.90, 108 commands attention as resistance, while a dip could have the SMA or demand at 107.46/107.56 make a show.

As aired in recent analysis, daily price displays room to approach the 200-day simple moving average at 108.30 and the falling wedge take-profit target of around 109.30.

Recent trade observed a retest at the double-top neckline at 1.2247 unfold, with buyers, overall, governing action. However, this does not imply the double-top pattern will fail; what it does mean, though, is traders are able to sell this market at a healthier risk/reward ratio, as protective stop-loss orders are generally positioned above pattern peaks: 1.2647.

After coming within touching distance of healthy demand at 1.2170/1.2204 and trendline support (1.2075), Thursday extended Wednesday’s closing recovery. While Tuesday’s high at 1.2363 has hampered buying, squeezing through here may lay the foundation for a rally to supply at 1.2477/1.2438 this week and trendline resistance (1.2163 prior support).

Friday’s analysis highlighted a possible retest motion off 1.23, forming wave 4 of a potential impulse wave. The piece also underlined a possible wave-5 completion around 1.2378, ahead of 1.24, where wave 1 and 5 may equal.

As you can see, both scenarios came to fruition Friday, with price action retesting 1.23 and holding into the close.

As noted in recent analysis, monthly holds 1.1904/1.2235, despite positioned against the major trend.

Sellers on the daily timeframe still have a hand in the fight despite hesitating at the double-top resistance neckline from 1.2247.

Buyers off 1.23 likely have 1.24 in sight as a possible take-profit target, with a breach closing in on the noted H4 supply. Intraday breakout buyers, therefore, will likely display interest above 1.24 this week.