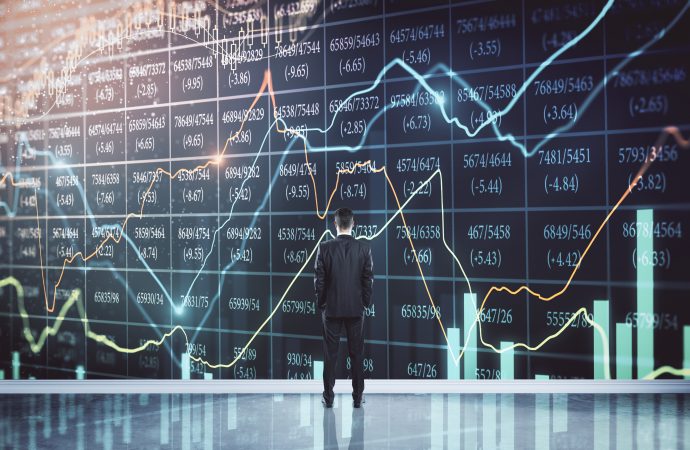 The US dollar index (DXY)—a measure of the US dollar’s value relative to a basket of foreign currencies— outperformed last week, settling 0.4 percent higher.

The DXY clawed back a significant share of the prior week’s correction, introducing the possibility of wrestling 91.00 resistance this week. Upstream, technical studies cast light on resistance at 92.26, accompanied by a descending wedge (between 94.30 and 92.18) take-profit objective at 92.76 (vertical green boxes).

As outlined in previous research, the greenback has fashioned an unquestionable downtrend since forging a top in the first quarter of 2020 at 102.99. Submerging the 88.25 February 16 low (2018) may help validate the current bearish narrative.

In the context of the RSI indicator, upside momentum subsided since coming into contact with a descending wedge target (black arrows) around 54.20. Although closing the week above the 50.00 centreline, recent efforts throw light on neighbouring trendline support.

This—despite January’s modest 0.7 percent slide—reasons additional upside towards ascending resistance (prior support – 1.1641) may eventually be on the horizon.

Since January 18, buyers arranged a moderate defence off 38.2% Fib support at 1.2059, with two successive green closes unfolding in the latter half of last week.

Holding back sellers since the beginning of December, demand at 1.2040/1.2065 stepped forward last week and prompted a hammer candle (bullish signal at troughs) on Wednesday. As you can see, buyers marginally extended recovery gains into the close of the week.

Above 1.2156, the organisation of technical framework reveals limited resistance (or supply) until 1.22.

Meanwhile, the RSI indicator is on the verge of testing trendline support after Friday’s top forged just ahead of overbought levels.

The H1 three-drive pattern at 1.2156 clearly attracted bearish interest Friday, implying short-term sellers may direct their focus towards the 38.2% and 61.8% Fib levels at 1.2117 and 1.2094, respectively, in early trade this week. In fact, the 61.8% Fib level uniting with 1.21 could be a location dip-buyers target, in attempt to trade in line with the higher timeframes.

Out of the RSI indicator, the value is seen testing waters beneath the 50.00 centreline, following an earlier trendline support breach.

The break of demand at 0.7600/0.7625 on Thursday likely cornered many buyers in this region. This, alongside the Fib cluster at 0.7696 serving up resistance heading into the closing stages of the week, suggests price is perhaps bound for territory south of demand this week.

Interestingly, below demand we have the daily trendline support close by around the 0.7577 neighbourhood.

0.77 demonstrated effective resistance over the course of last week, aided by RSI resistance at 60.18 and the H4 Fib cluster underlined at 0.7696.

Support at 0.7623, therefore, could greet price in early trading this week, posted nearby the 0.76 level.

Further observation on the RSI indicator shows the value formed a double-top pattern at 60.18 resistance (red arrows), with the neckline modestly breaking on Friday. By itself, this suggests momentum may head for oversold terrain this week.

Monthly could embrace higher levels over the coming weeks, yet before daily buyers join the fight a test of trendline support may unfold.

Fragile H4 demand at 0.7600/0.7625 could suffer another blow this week, removing any remaining buyers and causing a bear trap as daily buyers might defend nearby trendline support (red arrows). A similar picture may arise on the H1 this week: a whipsaw through 0.76 bids into daily trendline support (blue arrows).

Overall, therefore, the picture appears to favour buyers this week.

Although December pursued terrain south of 104.62, January chalked up a comeback and retested the level.

Against the backdrop of the monthly chart demonstrating a 104.62 retest (a potential bearish signal), the daily timeframe shows upside gained speed on Friday and stripped trendline resistance (111.71). This fuels a possible continuation to the 200-day simple moving average at 105.64, and supply at 106.33/105.78.

In addition, RSI resistance at 57.00— a level hindering upside since July 2020—also gave in last week.

Above, skies are relatively blue until 105 resistance, while ground south of current demand uncovers support at 104.19.

RSI traders may also want to recognise the value is on the brink of testing trendline support, just ahead of the 50.00 centreline.

Monthly price circling the lower side of a descending triangle at 104.62 may pressure daily breakout buyers above trendline resistance.

Should daily flow maintain a bullish trajectory, however, the 200-day simple moving average at 105.64 is seen.

Sellers will likely be drawn to the Gartley pattern’s PRZ between 105.17 and 105.00 on the H4 timeframe this week. By extension, this brings light to 105 psychological resistance on the H1. These resistances, of course, benefit from the possibility of monthly sellers making a show from the 104.62 region.

Since January 21, buyers and sellers have been squaring off around the lower side of resistance at 1.3755.

Heading into US hours on Friday, GBP/USD, once again, found resistance off 1.3750, with sellers subsequently scaling through the 100-period simple moving average and 1.37 support.

This has likely shaken out the majority of buyers and placed ascending support, extended from the low 1.3450, into the line of fire this week.

The lack of selling pressure witnessed around daily resistance at 1.3755, along with the immediate trend facing higher since 2020, also adds to the bullish narrative.

With the higher timeframes in mind, dip-buying strategies may target a number of short-term supports this week, including H1 ascending support, H4 demand at 1.3618/1.3637 and the 1.36 level.

DISCLAIMER:  The information contained in this material is intended for general advice only. It does not take into account your investment objectives, financial situation or particular needs. FP Markets has made every effort to ensure the accuracy of the information as at the date of publication. FP Markets does not give any warranty or representation as to the material. Examples included in this material are for illustrative purposes only. To the extent permitted by law, FP Markets and its employees shall not be liable for any loss or damage arising in any way (including by way of negligence) from or in connection with any information provided in or omitted from this material. Features of the FP Markets products including applicable fees and charges are outlined in the Product Disclosure Statements available from FP Markets website, www.fpmarkets.com and should be considered before deciding to deal in those products. Derivatives can be risky; losses can exceed your initial payment. FP Markets recommends that you seek independent advice. First Prudential Markets Pty Ltd trading as FP Markets ABN 16 112 600 281, Australian Financial Services License Number 286354.