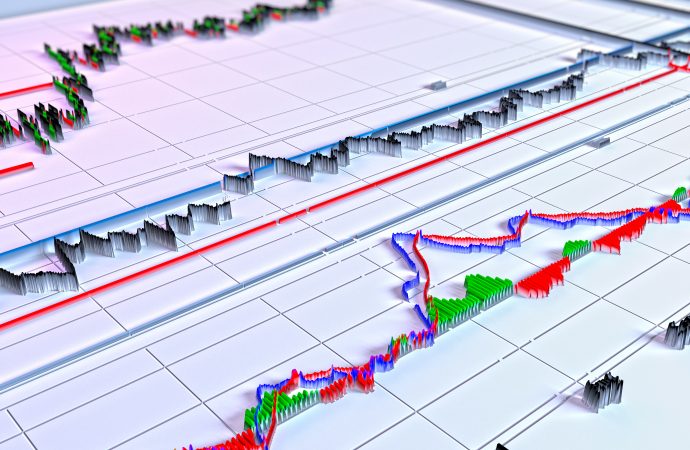 Higher by nearly 0.8 percent last week (1% month-to-date off fresh 33-month lows at 89.20), the US dollar index (DXY) is now on the doorstep of 91.00 psychological resistance. Increased enthusiasm to the upside over the coming weeks brings to light additional daily resistance at 92.26, accompanied by a daily declining wedge (between 94.30/92.18) take-profit objective at 92.76 (vertical green boxes).

Additional observations on the daily chart reveal the RSI indicator bumped heads with its declining wedge target (black arrows) at around 53.26 on Friday. This followed a break of RSI trendline resistance.

In spite of January’s pullback, the market’s overall trend remains bearish on the monthly chart—entrenched within a bulky pullback since May of 2008 (major swings). Since 2016, however, resistance developed around 103.00, launching a series of lower lows and highs in 2020 on the daily timeframe. Should price submerge the 88.25 February 16 low (2018), this may help further validate the current bearish narrative.

Support at 1.2095, as you can see, succumbed to downside pressure in the latter half of last week. This is likely to heighten interest in demand from 1.1923/1.2001 this week—a significant zone given it was here a decision was made to reach fresh peaks and topple 1.2011 (September 1 high). Traders will also note the demand is complemented by trendline support (1.0774).

Through the lens of the RSI indicator, Friday swept aside trendline support and voyaged through the 50.00 centreline.

So, while the immediate trend favours further weakness, efforts to pull higher might be seen in early trading this week.

The monthly timeframe remains calling for higher levels. However, in light of January’s slide so far, retesting demand at 1.1857/1.1352 is possible.

Daily demand at 1.1923/1.2001 could hold back selling this week, taking into account the area fuses with trendline support.

Short-term buying seen from the aforesaid supports implies the pair may seek to reclaim 1.21. Additional selling, moves that puncture H4 demand, on the other hand, could see price work its way into daily demand.

Resistance at 0.7805, as you can see, proved its effectiveness once more heading into the closing stages of last week.

The pair withdrew to trendline support (0.6991), with buyers displaying a non-committal tone. This casts light on demand at 0.7665/0.7644, a previous supply area drawn from June 2018. You may also recognise this zone shares space with daily support noted at 0.7647.

Early US Friday witnessed price dip a toe in waters beneath the 0.77 level, establishing a hammer candle and likely filling stops. The uninspiring effort to hold 0.77 hints at a test of demand from 0.7654/0.7672 this week.

Although December pursued terrain south of 104.62, January has so far arranged a modest comeback and is within close range of retesting 104.62.

Buyers and sellers squared off ahead of trendline resistance (111.71) last week, following the 103.08 support rebound seen the week prior.

USD/JPY eked out modest gains Friday, in what was a somewhat rudderless session.

However, sellers assuming control this week could have price join hands with 103.50 support, with a break unmasking a Fibonacci cluster between 103.24 and 103.32 (blue).

Besides support at 46.85, the RSI indicator offers little at the moment.

The H1 shows Fibonacci support at 103.24/103.32 may garner attention, as might the 104 space owing to the local confluence it brings to the table.

Despite renewing 2021 highs at 1.3711 Thursday, ahead of resistance at 1.3755, GBP/USD fell sharply on Friday and settled at session lows.

The pair has favoured an upside bias since early 2020, therefore last Monday’s swing low at 1.3450 could be challenged this week, though follow-through action is possibly bound for support at 1.3176.

Resistance at 1.3711—and associated Fib ext. levels—proved its worth once more on Friday; sellers nosedived from the said area and invaded demand at 1.3576/1.3607.

Alongside H4 demand at 1.3576/1.3607, the 100-period simple moving average and 1.36 level also caved on Friday, with the latter serving as resistance as we spun into US trading.

Out of the RSI indicator, Friday ended in the shape of bullish hidden divergence—price formed a higher high while the indicator chalked up a lower low—from oversold space.

A similar picture is seen on the H1 chart, particularly after retesting the lower side of 1.36, with 1.3550 likely to be initially targeted.